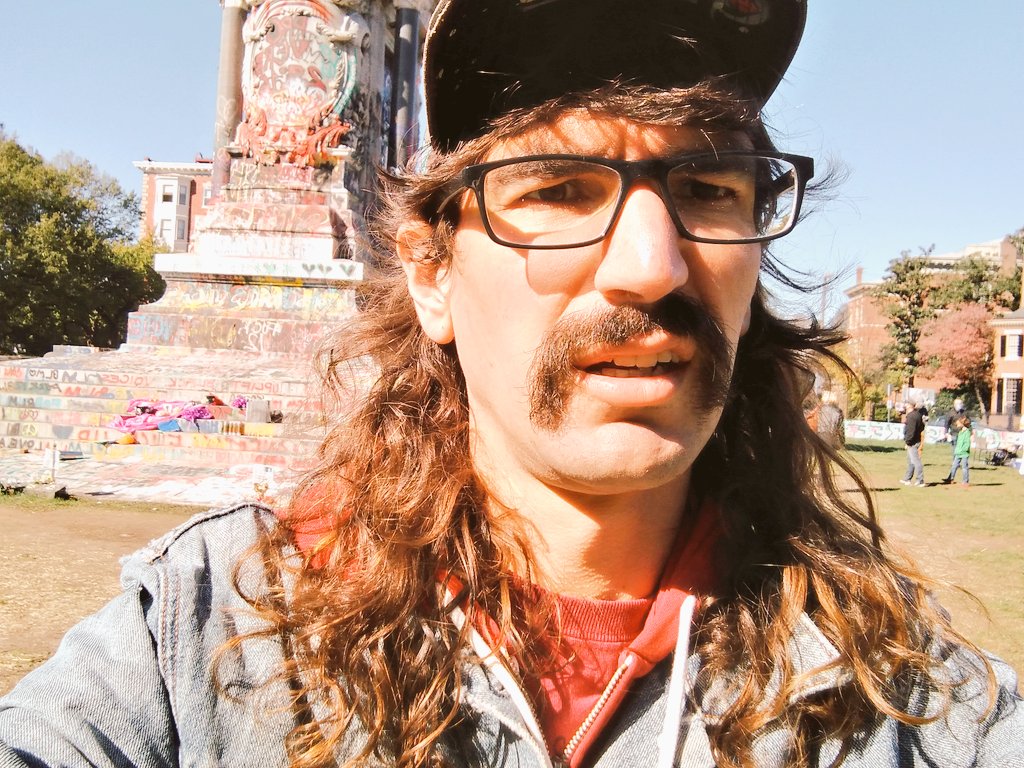 Activist, rapper, mustache-haver — Goad Gatsby is a lot of things. At the end of the day, he just wants to make the world a better, more chill place — and maybe inspire others while he’s at it.

When Kristopher Goad’s friends wanted to get him signed up for Facebook in the mid-2000s, none of them knew his full name. He was known only by his last name within the group, so they signed him up using the name Goad Gatsby.

“And then everybody just decided that my name was Goad Gatsby at that point,” said Goad.

Since then, he has become well-known within Richmond not only as a hip-hop performer with a highly recognizable “disco mustache,” but also as a longtime adversary of the Virginia Flaggers and their public displays of the Confederate battle flag on Arthur Ashe Boulevard. More recently, he’s also gotten some attention as a documenter of the protests in Richmond this summer and the police’s response.

In 2015, Goad was featured in a documentary series by The Atlantic called Battle Flag, about people’s opinions of the modern use of the Confederate flag.

At that point, Goad had been blasting hip hop music next to the Flaggers while they stood in front of the Virginia Museum of Fine Arts on weekends for about a year, and was the subject of a considerable amount of vitriol from the group.

“They thought I was a carpetbagger until they found out that I really was just a scalawag,” said Goad.

The Flaggers began to lose momentum in 2015, when they stopped announcing their appearance schedule publicly after two members were arrested on kidnapping charges. Carlos Lesters and Megan Everett of Florida kidnapped Everett’s two-year-old daughter in 2014 in order to prevent the child’s father from vaccinating her or enrolling her in public school.

These days, the Flaggers make it out to Arthur Ashe every once in a while, much less often than their onetime near-weekly basis. But there’s a whole new right-wing movement in Richmond now. Based on his knowledge of who the Flaggers were and who is affilliated with the Trump Train vehicular caravan that rolled through the city in October, Goad doesn’t believe there’s much overlap between the two groups.

Beginning when protests began in the streets of Richmond in late May over the killing of George Floyd and the ongoing issue of police violence, Goad was on the front lines. He did his best to document the response from the police and the city government, as he saw it, on social media. This brought him a whole new wave of attention, for better and for worse.

Goad was arrested several times during the summer, including once in September when he was charged with obstructing the free passage of others. At the time of the arrest, the police alleged the incident he was being charged for happened two weeks earlier during a demonstration in front of the Richmond jail, in which 11 people were arrested. Goad says he wasn’t even there at the jail on that day.

When he was arrested, he was taken to the Third Precinct Police Station, where they took his phone while he was attempting to get in contact with his lawyer. Goad never saw a warrant for his arrest; instead, a city attorney informed his lawyer that the warrant was sealed. He never got his phone back.

Since then, he has kept a lower profile, and the protests have declined. However, he is still keeping tabs on right-wing activity in the city. When he considers the ongoing unrest that occurred across Richmond throughout the summer, it’s his impression that the city created a self-perpetuating cycle of violence by retaliating against protesters instead of addressing the problems that inspired the protests. This, in turn, created more problems and further fueled the unrest.

One issue he sees as important to the way everything played out is the fact that police were brought in from precincts across the city, as well as other localities, as reinforcements during protests. Many of those that operated in this capacity had prior reputations for aggressive behavior.

Goad believes the police have a particular inclination to go after journalists and people who film protests. That’s because the more specific information gets out, the harder it is for police and city officials to justify their actions.

“If somebody is saying ‘The police are bad because they’re doing something I don’t like,’ that’s something they can just brush off. But if somebody’s being like ‘The police fired less-lethal rounds at people before there was any type of confrontation, here is some footage to go along with that,’ then the police go ‘Oh no, this isn’t good. They’re building a case against us in the court of public opinion,’” said Goad. “I wish I could build a case against Richmond police in City Hall, or the court of law, but unfortunately I don’t have that ability.”

For now, he’s sticking with the internet, where he continues to fight misinformation and lack of knowledge. He believes that making people aware of what’s really going on is the best way to convince them to take action.

“A lot of people are either willing to help but don’t know what to do, or they’ve never seen the type of information that would make them act,” said Goad.