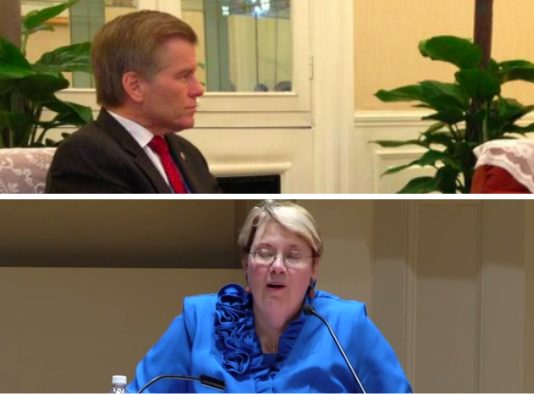 When former Governor Bob McDonnell enters a federal court room for sentencing today, he’ll have about 400 voices urging leniency for his corruption charge.

When former Governor Bob McDonnell enters a federal court room for sentencing today, he’ll have about 400 voices urging leniency for his corruption charge. Among them is University of Virginia President Teresa Sullivan.

Writing as a citizen, not in her official capacity, Sullivan told U.S. District Judge James Spencer that McDonnell was always ethical in his dealings with U.Va. “I hope that you will consider a lenient sentence,” the letter said.

McDonnell and his wife Maureen were convicted in September of multiple counts of influence peddling while he was governor. Spencer could sentence McDonnell to more than a decade in prison, as prosecutors have requested. McDonnell’s attorneys have asked that he be required to perform 6,000 hours of community service but not be imprisoned.

The McDonnells were convicted of lending the prestige of the governor’s office to Richmond businessman Jonnie Williams Sr. in exchange for $177,000 in loans, vacations and luxury goods. Williams, then CEO of Star Scientific Inc., wanted the governor’s support for his company’s tobacco-based dietary supplement, Anatabloc.

In her letter, which was dated Oct. 11 and filed in federal court late last month, Sullivan said McDonnell never prodded U.Va. to conduct research that might have helped promote Anatabloc.

Sullivan and McDonnell, once a rising star in the Republican Party, worked together during the four years he held office. Sullivan said that McDonnell phoned her several times a year on official business and that they met occasionally in person.

“If Governor McDonnell had wanted to put pressure on the University of Virginia to conduct research on a particular subject, he had the access and opportunity to do so through me,” Sullivan wrote, noting that U.Va.’s medical school and research officials report to her.
“Never, at any time, was there any pressure put on me of this sort. To the contrary, I found that the Governor was interested in good higher education policy and sought to learn more about the Commonwealth’s public institutions.” the letter said.

Besides Sullivan, more than 400 people have written letters supporting McDonnell and asking Spencer for leniency. They have come from his children, other relatives, friends, charitable organizations and public officials, including Democrats such as U.S. Sen. Tim Kaine.
The former governor, who left office last January, is scheduled to be sentenced this morning at 10 AM.