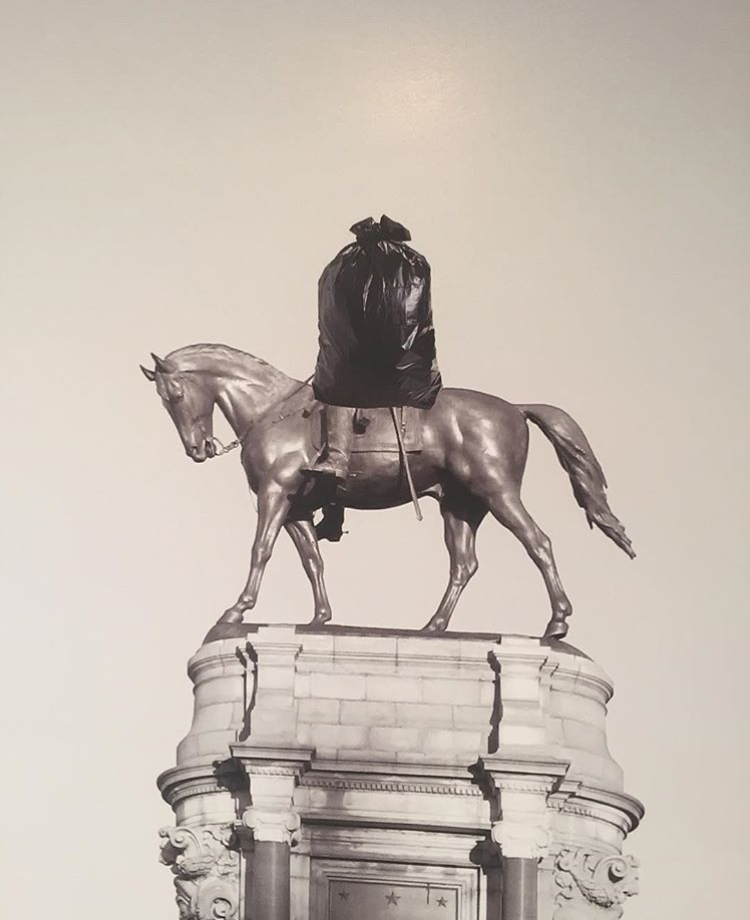 When Diversity Richmond’s Iridian Gallery opened the doors to their ‘Truthful History Heals’ exhibit, one image (seen above) we shared on social media got a lot of you talking… or screaming.

When Diversity Richmond’s Iridian Gallery opened the doors to their ‘Truthful History Heals’ exhibit, one image (seen above) we shared on social media got a lot of you talking… or screaming.

The image was part of a series of photoshopped images of the famous Lee Monument which honors Civil War Confederate Gen. Robert E. Lee.)

Before the verbal shooting match erupts in the comments section below this post too, as it did on our Instagram post (more on that later) I thought I’d reach out to the artists involved to see where the idea came from and what they were hoping to get at with the work.

That took me to a meeting with Camden Whitehead, a local architect and Associate Professor of design at VCU. He heads up mOb Studio which unites students from several design fields – graphic, fashion, interior and more recently engineering – and has them collaborate on projects together. The group forms an “experimental design lab” where students partner with other local civic-minded groups, like Storefront for Community Design, to offer thought out, purposeful and designed projects for public works.

“To connect students to Richmond,” said Whitehead, summing up the studio’s intentions in a few words. “It’s kind of a primer for living in the city. A Lot of kids grow up in the suburbs or rural Virginia and don’t have that experience. They don’t know what the issues are and how to approach them.”

And among those issues Whitehead hopes to broach with his students is one Richmond is all too excited and scared of – race.

More often than not, RVA finds itself struggling to embrace and then finding ways to avoiding its 400+ year legacy of human oppression.

This has left Monument Avenue’s Confederate legacy in the spotlight for any number of complicated reasons – without weighing in personally, here’s a link to South Carolina’s justification for Secession (spoiler alert, slavery is mentioned frequently).

Whitehead isn’t too shy about his feelings on the issue, he’s the one who came up with the redesign project in the first place. After the removal of similar statues in New Orleans, South Carolina taking down the Confederate Flag from their Capital, and other conversations around removing statues that honor the losing side, he thought it would be an interesting challenge for his class.

But he clarifies the goal wasn’t to form realistic options, but rather to continue the conversation.

“People are going to arrive where they’re going to arrive and we’re not seeking to bring someone to our point of view,” he said. “It was a situation where we agreed that we didn’t necessarily agree with those values.”

The project also hoped to take the individual out of the fight over history, to turn folks away from fighting one another and focus more on the images and designs themselves.

“I think design has a powerful capacity to focus the issues on things, on the environment, what’s made and built, rather than individuals,” he said. In this case, the designed memorial to honor a Civil War general does also happen to honor the way of life they fought for, including legal slavery. “It’s easy, when it’s on individuals, when it gets into name calling… Yes, Robert E. Lee was a guy, but it’s now about the issues that the statue embodies.”

Whitehead ran into a few surprises when the project first started. Some of his students who weren’t native Virginians didn’t have Civil War statues “on their radar,” and a Black student from Washington DC similarly hadn’t invested much thought into the concept.

“After the first or second meeting I thought ‘am I the only person who’s bothered by this?’” he recalled before noting their naïvety on the topic often lead to more unique interpretations of the project, acting as a benefit more often than not. “Without it being a hot button issue for them, they managed to approach it in a much more pragmatic way.”

But once the entire studio got involved, according to Whitehead, anger became more visible, mainly among the students who grew up in and around Richmond and witnessed racist behavior.

“For kids who are in tuned with that, it is a hot button issue,” he said. “What we’re primarily concerned with is they address this issue with substance, not just spitfire and venom cause that has proven to not be very effective.”

I’m not sure if I agree the final product is free of “spitfire and venom,” – when you replace a famous statue with a trash bag that inspires a number of strong reactions.

It was easily one of our most commented on posts. Highlights include…

from marctownes – Not cool. Lee was a gentleman and a true Virginian, who when offered to lead the Union army, declined because he was unwilling to fight against his home state. Some of those monuments aren’t worthy (Jeff Davis was a goddamn lunatic), but this is the one that should actually stay. – love you RVAmag and all of Richmond but this ain’t my bag

waylortarren – Wow… This earns you an unfollow from me. So long from a long time follower. This post is as anti-RVA and anti-Virginia as it gets.

mekhi_millz It’s not a problem with reconciling with the history of the south. Maybe ppl want to see RVA honor something else about its history besides just its racist past. It wouldn’t hurt anyone for them to put up a statue of maybe depicting a slave doing hard the hard labor that built this wonderful town or not trying to build a baseball field over the slave grave yard. RVA has done so much to white wash the past and make it look like it’s still not trying to cover up all the pain and suffering. Still left over from a time that is still affecting the present.

spenny_g – I completely agree about representing more of the real history, there should be much more visible acknowledgement and honoring of the life and struggle of slaves and others who played a major part in Virginia’s history. It’s the logic of removing or censoring existing history and culture – both positive and negative – that is a slippery slope.

Honestly, RVA needs a statue of a donut. Or beer can. Or a hipster VCU student on a bike, texting with one hand. Those would be more representative of the city.

No matter your opinion on the issue, Whitehead thinks the real impacts of changing the statute might be a lot less than you think.

“If you walk, ride a bike, or drive down Monument Avenue, your experience of that statue is actually really minimal,” he said. “If you took that statue down and replaced it with somebody else, most people wouldn’t really even notice. If you were able to just come in the night and do that… it’s more the symbolism of what it has come to represent than the monument itself.”

Whitehead is currently applying for a National Education Association grant to hold a nation-wide competition for a redesign of the 5+ mile stretch of land.

“Wouldn’t it be nice if that 10 blocks of Monument Ave was swallowed up in a much larger story,” said Whitehead. “If it was seen in it’s entire historic context of the state or the city, people could place it and it wouldn’t be the dominate experience.”