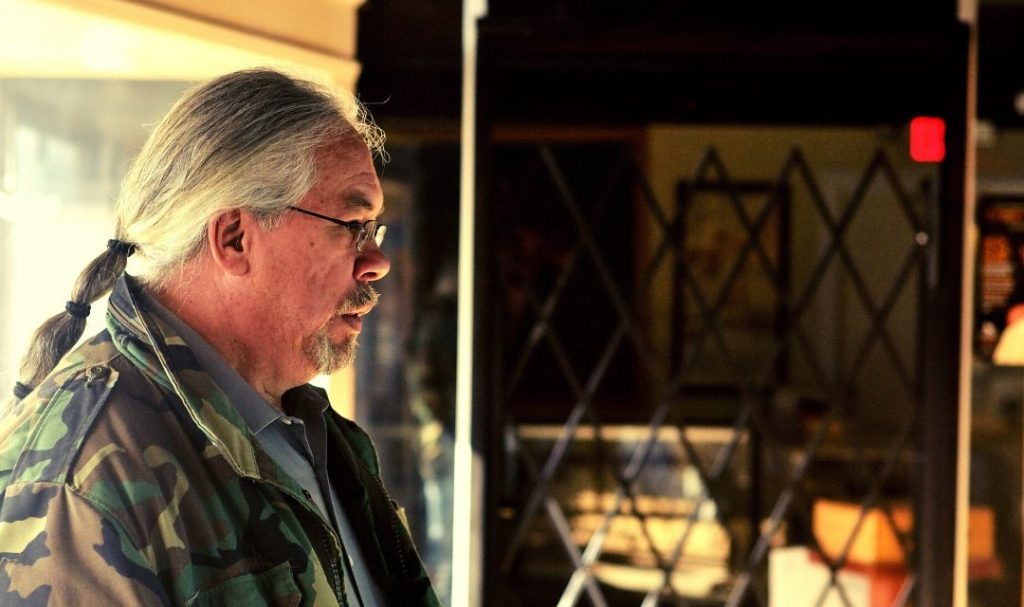 If you haven’t spent much time in the river country of Virginia’s Tidewater region, you might mistake it for a standard-issue rural community. Mobile homes and tin-roofed Cape Cods scatter across flat fields, framed by loblollies and sycamores. Eagles and osprey war in the cool, green breath of the river. Railroad tracks and duck blinds, distant shotgun fire, a white church; if it weren’t for signs announcing the entrance of the Pamunkey Indian Reservation, you could be forgiven for assuming you were just in a rural neighborhood with historical markers and a few uncommonly-preserved buildings.

The 1200-acre reservation sits on an isolated peninsula in King William County, an hour’s worth of winding back roads from Richmond. The ancestral lands of the Pamunkey tribe stretch from the fall line in Richmond to the coast, and from the Potomac down into North Carolina. This is the land they have hunted, fished, traded, and cultivated for over 10,000 years. If you live in Richmond or east of the city, you live on their land. And yet, common knowledge of the Pamunkey is largely limited to Pocahantas, Chief Powhatan, and a forthcoming casino.

As exciting or troublesome as the prospect of a casino may be to the metropolitan area, the narrow publicity spotlight engages in a kind of erasure, pushing significant histories and struggles to the periphery of civic discourse. Most recently among them is the tribe’s hard-won battle for federal recognition.

“Federal recognition came in 2016,” said Chief Robert Gray of the Pamunkey Tribe. “It opened up our access to Indian Health Services for tribal members, and other federal programs that the government is obligated to, by its trust responsibility to federally-recognized tribes.”

Housing and environmental assistance for the land and the river are also included in federal programs. Before recognition, the Pamunkey tribe had limited access to federal funds, similar to nonprofits and community groups — but now with sovereign rights, Chief Gray sees it as a more level playing field. Their tribe has direct government-to-government communication with the United States federal government.

The Pamunkey Tribe is governed by an elected body comprised of seven council members and a Chief, collectively referred to as Chief and Council. Chief Gray is a retired USAF Chief Master Sergeant, with a rope of silver hair and strong, gentle eyes. According to him, it was this governing body that decided, with community support, to begin the federal recognition application process in the late 1970s. But the official tribal relationship with the Commonwealth, he says, was established more than 340 years ago.

“We were the first to welcome the first permanent English settlement, and we were the first to be pushed out of our lands. Violence, disease, and warfare decimated our tribe. And not just our tribe; the tribes of the Tidewater area,” Chief Gray said. “By the 1700s, even the local Europeans, Americans — whatever you want to call them — they didn’t consider us much.”

The Pamunkey Tribe was mentioned in the House of Burgesses and various Virginia General Assembly newspaper articles, but wasn’t a major force to be considered until the 1800s and the time of Indian wars out West. Chief Gray noted that as press coverage grew, eastern Americans began to form images in their minds of Native Americans, as a whole, based off of the Apache, Sioux, and other western tribes in the news.

“Even our tribe, when the Jim Crow laws started coming, realized that everyone outside of us was thinking, ‘Oh, these aren’t real Indians. Real Indians are out West,’” said Chief Gray. “We put a concerted effort into saying, ‘No, we’re real. We’re real Indians. Here.’ And to do that, we portrayed ourselves as Indians; in the late 1800s, our tribe formed a group that would go around putting on plays.”

One of the most famous plays, according to Chief Gray, was a reenactment of John Smith’s rescue by Pocahontas. “Now, everyone agrees [that story] was BS. Didn’t happen that way. But we did it to show we are Indians living right here amongst you. We haven’t gone anywhere.”

The effort to establish the tribe as Indians came with the realization that to protect their land, the Pamunkey needed to protect their identity. Obstacles on the path to federal recognition date back to the railroad that ran through their reservation: in the 1850s, the railroad was built without permission. In the late 1970s when a tribal member retired to move back home, he learned the tribe wasn’t receiving rent for the railroad. They sued the railroad for back rent, but because of the 18th century Indian Non-Intercourse Act, settlements with Indian tribes had to be approved by the U.S. Congress — and the legislation specifically said that it, in no way, gave federal recognition to the tribe.

“So the question came up,” said Chief Gray. “If you don’t federally recognize us, why do we have to go to you for this? Ok, it just is. Let’s go ahead and get this federal recognition.”

Starting down the path, the Pamunkey had to prove their continued existence as an Indian Tribe through their historical government and culture. As the years went on, efforts to gain recognition became harder; the Bureau of Indian Affairs (BIA) required more proof and evidence. In the 2000s, the tribe arrived at the BIA office in Washington, D.C. with a truck full of evidence and documentation, requiring dollies to carry the boxes inside — but opposition came when their application went in, with outsiders worried they’d take advantage of economic opportunities that would cut into their business.

Proving the continuous culture, heritage, and presence among the Pamunkey’s diasporic population was difficult. Even with the longstanding Commonwealth Treaty — which the tribe still honors by presenting a deer to the Governor each year — generational continuity in Virginia has been largely interrupted by another regional tradition: racism.

“Our people fought in the Revolutionary War,” said Chief Gray. “In the Civil War, we were Unionists… local landowners were trying to have the state take away the reservation. We figured we’d be better off if the Union won.”

As Jim Crow laws came into effect after the war, the tribe fought them. In the 1924 Racial Integrity Act, one drop of anything other than white blood deemed a person colored — unless that one drop was Indian.

“Rich families in Virginia, old money, were proud of their ancestry with Pocahontas. They wanted to go around claiming Pocahontas, but they didn’t want the stigma of being colored,” said Chief Gray. “So the way they passed the law, those people weren’t colored, but the real descendants of the Pocahontas tribe were.”

By the 1920s, many Pamunkey tribal members left the South to move north. Chief Gray’s grandparents left for Philadelphia, which is now home to the tribe’s second-largest population base. He maintained a close relationship with the reservation in Virginia, as his family visited each holiday and summer throughout his upbringing.

Today, it seems on the surface like life on the reservation isn’t much different than in other Tidewater communities. Tribe members commute to Richmond, Williamsburg, and Norfolk for work. Most attend services at the Pamunkey Indian Baptist Church. But what sets reservation life apart isn’t so much the old one-room schoolhouse, or the museum cataloging the tribe’s archeological development — it’s a connection to each other and the land. It defies the capacity of bureaucratic cataloging.

“We have a sense of community in the Pamunkey Tribe. Our children are born with that. We encourage it,” said Chief Gray. “In Indian country, the term is ‘cousins.’ I know my cousins. My grandmother was one of about ten siblings, and their grandchildren are my cousins… I know a lot of families don’t have that far of a connection and ability to trace their lineage. We’re all under the same banner: Pamunkey Indian Tribe. We know our history, and we’re proud of that history and everything it took to get us here.”

Times have changed over the years. During the isolation of Jim Crow laws, the state helped establish the reservation’s schoolhouse, which only went through 8th grade. For further education, they had to go out-of-state; by the time the schools were integrated in the 1960s, many families had already left.

“In a way, a lot of the damage was [already] done,” said Chief Gray. “Since I’ve been here, having the kids go to public schools gave the parents more contact with local residents, and more day-to-day relationships. That’s really what changed. No laws, just actually meeting people. Now, my kids went to King William schools. One lives in Henrico County, one lives in Mechanicsville. We’re integrating into the community now.”

With that integration came the added complexity of maintaining tribal identity. Programs like the Indian Gaming Commission provide a path for tribal economic sovereignty, free from reliance on the uncertainties of federal grant programs. With the prospect of financial independence, the tribe looks to implement new environmental stewardship and river protection initiatives, and explores options to relocate their museum to be more accessible to Virginia’s historical tourism.

Chief Gray believes the Pamunkey will have to work harder among the distractions of the modern world, individually learning how to manage their tribal identity alongside the other facets of their lives.

“Having this landmass for hundreds of years since the treaties, the reservation means… God, I can’t even say how much it means to tribal members,” said Chief Gray. “We have members who come down, and one of the first things they do — before they even visit their family — they go down to the river.”

Many tribal members visit the river several times each day. It carries an emotional bearing, and even from Philadelphia, the reservation gave Chief Gray’s family a connection to the land.

“I think having this as a base may have given our people more willingness to scatter out of Virginia, because they always knew they had somewhere to come back to. Somewhere they belonged,” said Chief Gray. “If we didn’t have the land and the families disappeared, the only connection would be family members owning private little plots. And I don’t think the connection to the tribe would be as strong as it is today, knowing my ancestors have lived here for over 10,000 years.”