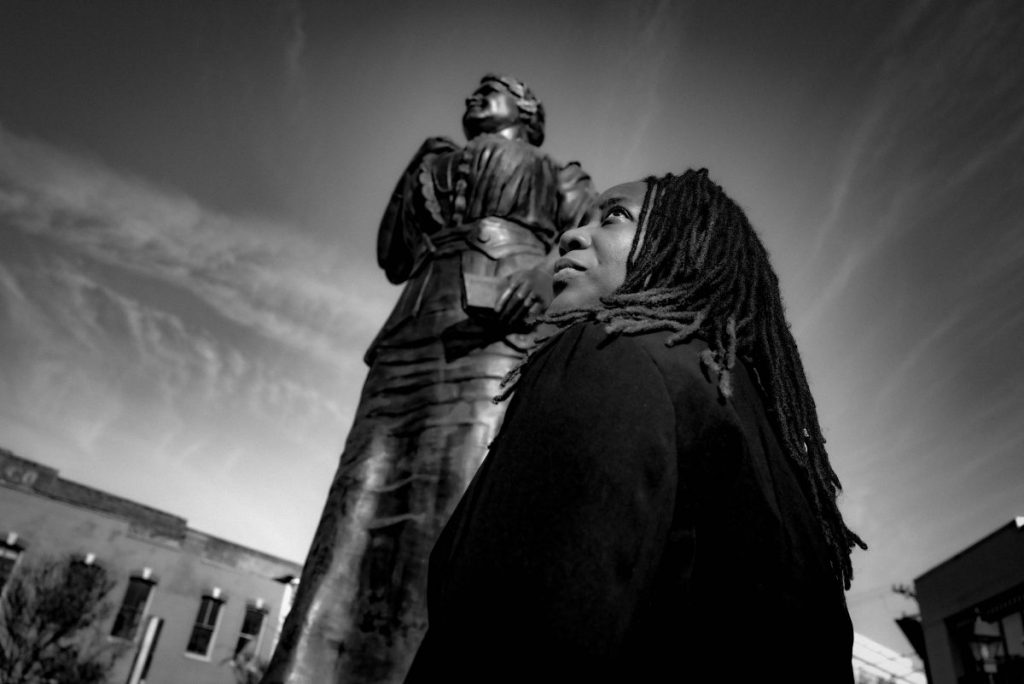 Princess Blanding, a prominent public safety, mental health and racial justice advocate, has announced her campaign to run for Governor of Virginia in 2021. Blanding has entered the race as the candidate of the newly-formed Liberation Party, which will compete as an independent party in the November 2021 election.

Blanding is the sister of the late Marcus-David Peters, a 24-year-old high school teacher and alumnus of Virginia Commonwealth University. Peters was fatally shot by a Richmond police officer in 2018 beside Interstate 64/95 while having a mental health crisis.

In 2020, Blanding was a steadfast presence in Richmond activism, speaking at multiple marches and demonstrations throughout the city and campaigning with progressive candidates for local office, including Allan-Charles Chipman and Joseph Rogers. During the General Assembly’s legislative special session in August and September, Blanding helped lead efforts to pass several police reform bills with varying degrees of success.

While the legislature passed bills including the Marcus Alert and a ban on no-knock warrants, Blanding expressed frustration with the outcomes of the special session, calling the version of the Marcus Alert “a diluted, ineffective bill,” and highlighting the failure of bills such as HB5013, which proposed the repeal of qualified immunity in the state of Virginia — HB5013 passed in the House of Delegates, but failed in the Senate.

In a recent ceremony honoring the passage of the Marcus Alert, with Governor Ralph Northam and gubernatorial candidate Jennifer McClellan in attendance, Blanding asked the Democrats to “take a moment to pat yourselves on the back for doing exactly what this racist corrupt system…expected you all to do.” Blanding went on to say, “Make the Marcus Alert bill a watered down ineffective bill that will continue to ensure that having a mental health crisis results in a death sentence.”

In the race for the Republican nomination, which will be decided via a convention rather than a primary, former-Speaker of the Virginia House of Delegates Kirk Cox (66th District) is positioned against far-right provocateur and State Senator, Amanda Chase. US Congressman Denver Riggleman (R, VA-5) has indicated interest as well, but it is unclear whether Riggleman would run for the Republican nomination or as an independent.

In Virginia, a candidate who loses a race for a party nomination is unable to subsequently run as an independent in the general election that year.

The Virginia governor’s race is one of just two in the country in 2021. The other race, to take place in New Jersey, will likely be a landslide in favor of Democratic incumbent Governor Phil Murphy.

The election will serve as a microcosm of nationwide political dynamics. Across the country, establishment Democrats like McAuliffe—a former DNC Chair and staffer for both Bill and Hillary Clinton— face current and future challenges from a new generation of diverse and dynamic Democrats. In Virginia, this is highlighted by the candidacies of three young Black Democrats, and the entry of Blanding as a third-party candidate. To date, no Black woman has ever been elected governor of the United States.

Virginia’s Democratic landscape is further complicated by the potential entry of self-identified socialist Lee Carter, which is reminiscent of the 2018 upset by Alexandria Ocasio-Cortez (D, NY-14). Cortez created shockwaves in the Democratic Party, unseating Rep. Joe Crowley, a ten-term US Congressman who served as Democratic Caucus Chair in the US House of Representatives.

The contours of Virginia’s Republican race also reflect the dynamics currently at play within the GOP nationally. Chase has urged Donald Trump to “declare martial law” and pursue 2020 election conspiracy theories, while also stating that she will “never accept” Joe Biden as President of the United States.

The third-party campaign announcement of Blanding, an activist with considerable social justice bona fides, promises to further complicate the electoral calculus for Democrats. With McAuliffe’s 2013 victory during the Obama presidency as an exception, Virginia has elected governors from the opposite party of the sitting US Presidents in all elections since 1978 — ten of the last eleven gubernatorial races.

This two-party jockeying and its impact on Virginia politics apears to be a critical impetus for the Blanding campaign. In a press release announcing her candidacy Blanding said, “The fight has moved from the streets and city government, to the state legislature where progressive change is imperative. Our time is now to create a future in which all Virginians see their values reflected in their leaders.”

And in a video on her campaign website Blanding promises to, “trust the science and use sound moral judgement as we transform the Commonwealth into a common good state that prioritizes clean energy, provides comprehensive health care for all, is economically thriving, ensures that Black Lives Matter, is gender inclusive, and guarantees housing security for all Virginians.”

David Dominique is a composer and performer living in Richmond. Currently Assistant Professor of Music at William & Mary, much of Dominique’s recent music has been written for a jazz octet, including the albums Mask (2018) and Ritual (2013). Dominique has also composed numerous contemporary chamber pieces and theater works. For his return appearance at the ICA, Dominique will improvise solo, using his voice, electronics and a loop pedal to create an emotionally-infused soundscape built from whispers, chants, vocal harmony, and a selection of the texts and themes that have informed Rashid Johnson’s “Monument”.