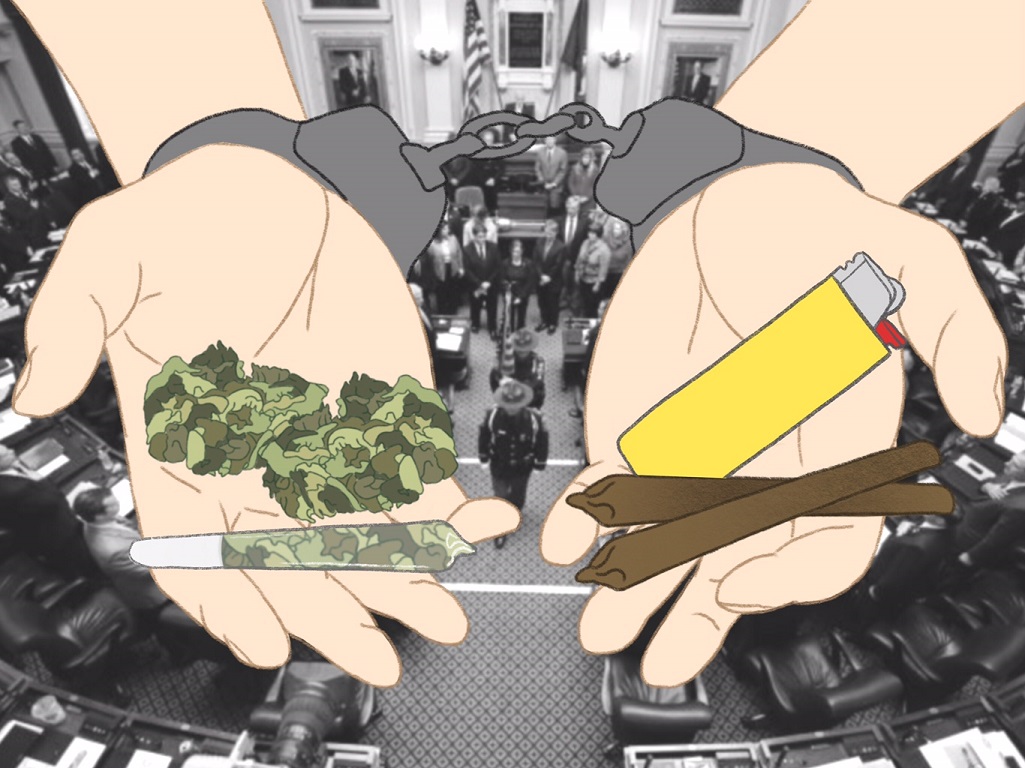 Despite High Costs & Unequal Enforcement, Decriminalization Remains Out Of Reach In VA

While most of Virginia may be enjoying some good, old-fashioned reefer madness today, at least 22,000 people will be left out this year, paying fines and sitting in jail as decriminalization efforts have failed to take effect. Most of them are Black.

Sorry to bring down your high.

“[Decriminalization] is an urgent criminal justice and racial justice issue in Virginia that lawmakers should be taking more seriously,” said Bill Farrar, director of strategic communications at the American Civil Liberties Union (ACLU).

According to a study conducted by ACLU, 8.2 million arrests are made each year for marijuana possession, while people of color are 3.72 more likely to be arrested for possession. Farrar stated that in certain areas of Virginia, they are eight times as likely to be arrested. Those arrested are most often carrying less than an ounce of marijuana, yet have exorbitant fees and often spend time in jail. Currently, being caught with less than half an ounce is a misdemeanor, but anything over a half ounce is considered a felony.

“The commonwealth spends nearly three quarters of a billion dollars each year enforcing a law that dramatically and disparately entangles people of color in the criminal justice system, while neglecting to fund programs to help people with mental illness or directly address the growing opioid problem,” Farrar said.

This past General Assembly session, two senators presented bills with decriminalization efforts and both failed at the Courts of Justice committee level, meaning they never reached the floor for a general vote.

“It’s important to note that African-Americans only make up 20 percent of Virginia’s population yet are arrested three times more than whites for marijuana possession when use is equal between races,” said Jenn Michelle Pedini, executive director at Virginia NORML (National Organization for the Reform of Marijuana Laws) who assisted Senator Adam Ebbin in writing Senate Bill 111, which would decriminalize marijuana and reduce charges to a simple $50 fine on the first offense with subsequent fine increase to $100 and $250 for second and third offenses.

“You have to work with intent to suss out 20 percent of your population and target them three times more,” Pedini said. “That’s not unique, we see it play out throughout the country, and it’s not to say that law enforcement is inherently biased against African-Americans, or explicitly biased, more likely it is them exercising their implicit bias. This is how systemic oppression plays out in America.”

In addition to this systemic oppression, both Farrar and Pedini cited gross spending habits by the Virginia state government to continue arrests for marijuana possession. According to a study by the Drug Policy Alliance, Virginia spends $70 million annually on marijuana possession arrests and prosecutions alone.

“That is more than the Commonwealth has budgeted for the current fiscal year for statewide capital improvements to transportation and natural resources combined, and 14 percent more than the amount of general funds budgeted to support the Department of Behavioral Health and Developmental Services – which deals with mental health and substance abuse treatment, among other things – for the entire 2016-18 biennium,” Senator Ebbin said in a statement to the General Assembly in February.

In 2016, many activists and politicians worked to find money for processing thousands of backlogged rape test kits and struggled to find it. “We didn’t have a few thousand dollars to see who had raped someone, then had to waste time and money arguing about how to find a couple million dollars to process those backlogged kits,” Pedini said. “Meanwhile, pot possession, which has little or no public safety impact, we have $70 million for.”

A portion of this spending is for programs like the Virginia Alcohol Safety Action Program (VASAP), a court-ordered addiction clinic. Twenty-one percent of those ordered to VASAP are there for marijuana possession, equal to the percent sent in for opioid and heroin.

“If we stopped this waste of taxpayer dollars and instead decriminalized, removed that six months to one year rehab requirement, you would immediately double access to treatment for opioid and heroin addiction,” Pedini said.

Senator Tommy Norment promised during his campaign to put forward a decriminalization bill as well, but later reduced it to an expungement bill. Both Farrar and Pedini were disappointed in this change, and Senator Ebbin openly objected to it on the Assembly floor.

“The members of these subcommittees are primarily prosecutors, and they’re not interested in passing legislation that limits or reduces their prosecutorial discretion,” Pedini said.

In a 2018 poll released by Virginia Commonwealth University, eight out of ten Virginians said they would prefer reducing the marijuana possession misdemeanor conviction to a fine and are in favor of reform.

“Virginians want us to decriminalize marijuana possession, not to create a new fish trap that doesn’t do anything to address the racial disparities in our current criminal justice system nor address the high costs of continuing to criminalize simple possession,” Senator Ebbin said.

Pedini and Farrar are hopeful that Senator Ebbin’s bill will pass in 2020 after the 2019 elections.

“We’re ruining people’s lives with this… We don’t need some tiny half step to pretend like that’s reform,” Pedini said. “We need real reform, and that’s decriminalization. This criminal charge is going to follow people for the rest of their lives, can lead to them losing their children, being evicted, losing their job, losing their scholarships.”

Madelyne is a Richmond native and staff writer at RVA Magazine, primarily covering politics and white nationalism in Virginia. She spent the past four years working and living in D.C., earning her B.A. in journalism and running to the White House every time the President sneezed. Follow her on Twitter at @madelyne_ash.
Topics: ACLU, marijuana decriminalization, NORML, Senator Adam ebbin