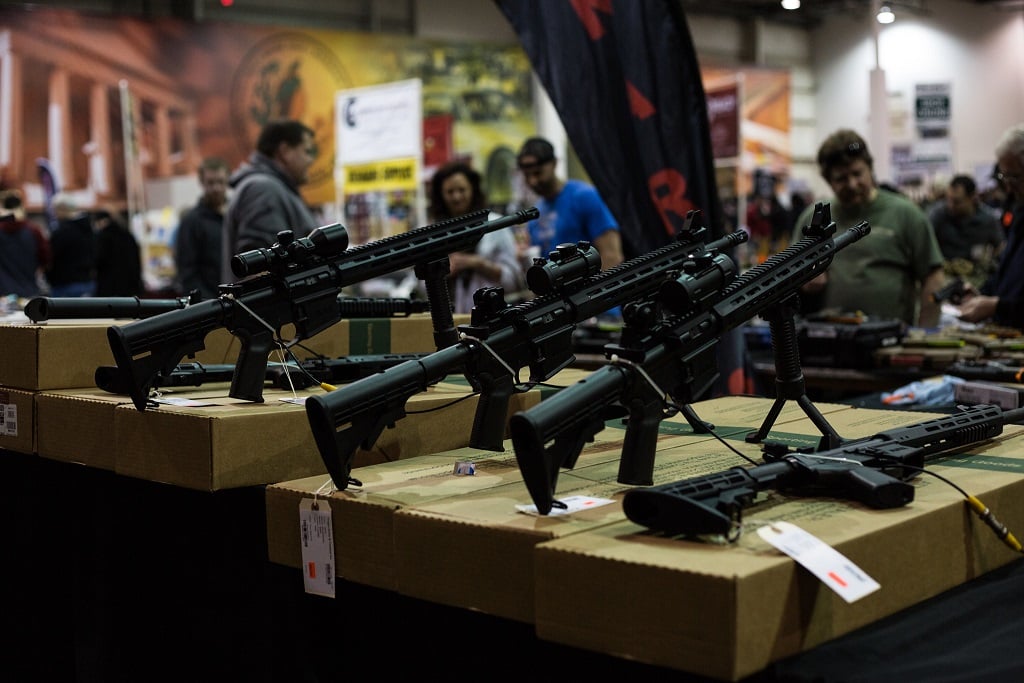 The International Standards Organization approved last month a petition from New York-based Amalgamated Bank for a new merchant code. The ISO is Geneva-based nonprofit with global members who establish best practices across a range of subjects, according to its website.

The new code categorizes gun sales at gun and ammunition stores, which will allow banks to report suspicious activity and illegal gun sales, according to a press release from Priscilla Sims Brown, president and CEO of Amalgamated Bank.

Visa, Mastercard and American Express credit cards plan to adopt the new code, according to multiple reports, though it is unclear how widespread implementation will work.

“This action answers the call of millions of Americans who want safety from gun violence and we are proud to have led the broad coalition of advocates, shareholders, and elected officials that achieved this historic outcome,” Brown stated. 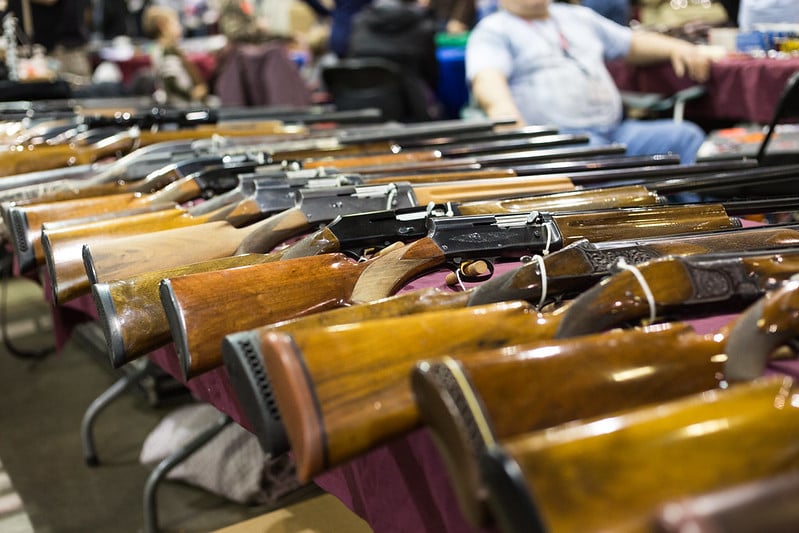 Credit card providers categorize purchases under merchant category codes, or MCCs, that classify businesses by their predominant business activity, according to the IRS. Categories cover many industries, including many types of building contractors, travel and leisure services, entertainment and recreation, and even escort services.

A Mastercard reference booklet from 2020 listed firearms under the MCC “durable goods — not elsewhere classified.” Other items in the same MCC include wood chips and musical instruments. Firearms and ammunition stores also appear in the same booklet under the MCC “miscellaneous and specialty retail stores,” along with sunglasses shops, magic stores and beauty supply stores.

The new code allows for the separate categorization of firearm purchases.

“Gun owners are not in the mood for anything that — in any way, shape or form — implies that we’re being monitored, or our rights are attempted to be curtailed,” Van Cleave said.

The code will not be useful for gun control, Van Cleave said.

Virginia Attorney General Jason Miyares joined 23 other attorneys general from across the country in a letter against the new merchant category. Miyares is against the collection and tracking of private data by “big government and big businesses,” his office stated in an email comment.

“This new policy will do little more than put Virginians’ privacy at risk,” Miyares stated, “and discourage law-abiding citizens from exercising their constitutional right to purchase a firearm.”

The purchase of firearms should be “no one’s business but their own,” Miyares stated.

“To reduce gun violence, we need to get violent, repeat offenders off our streets instead of tracking lawful purchases at Bass Pro Shop,” Miyares stated. 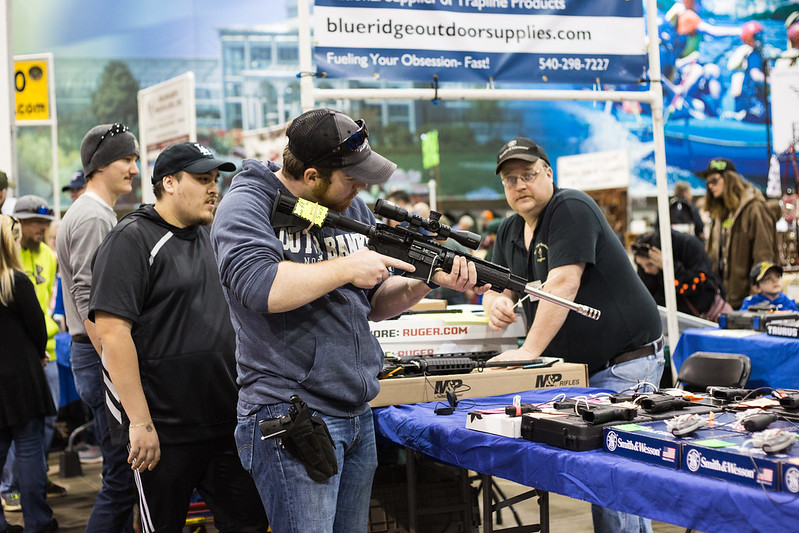 A vendor looks on as a customer handles a scoped assault rifle at the Sunday, March 25 gun show (2018). A majority of vendors, including the one pictured, owned retail stores around Virginia and traveled to the Richmond show with a smaller selection to sell. (Photo by Erin Edgerton)

The Giffords Law Center to Prevent Gun Violence, an organization that works to prevent gun violence through legislation, offered research to Amalgamated Bank in the development of the category code. There shouldn’t be “special treatment” for gun stores since the same rules already apply to other businesses, according to Adam Skaggs, chief council and policy director at the Giffords Law Center.

This code won’t necessarily lead to any new laws, rather it levels the playing field, Skaggs said. However, it could help detect illegal activities like gun trafficking, according to Skaggs.

Gun rights advocates worry the code may flag, or not be able to distinguish, high-dollar purchases from stores that sell firearms. Van Cleave used the example of a boat purchased from a store that also sells firearms, and voiced concern over the possibility of unnecessary scrutiny.

The code is for gun stores and stores that sell firearms and ammunition. Stores that sell other merchandise, like Bass Pro Shops and Walmart, could have “dedicated cash registers” to use the code and keep purchases separate, Skaggs stated. Pharmacies, Skaggs pointed out, keep track of separate transactions for prescription drugs and general merchandise.

“I do think it’s a tool, and given the levels of gun violence and how much illegal gun trafficking and gun crime we see in this country, every tool that should be used to improve the situation is a way that we should pursue,” Skaggs stated.

The “small change” could help prevent huge tragedies, said Nick Suplina at a New York press conference announcing the new code. Suplina is the vice president of policy and law with Everytown for Gun Safety. He pointed to the thousands of dollars spent on guns and ammunition used in the mass shootings in Aurora, Colorado; Orlando, Florida; and Las Vegas, Nevada. Such expensive and multiple purchases could in theory be flagged under the new code, Suplina said. 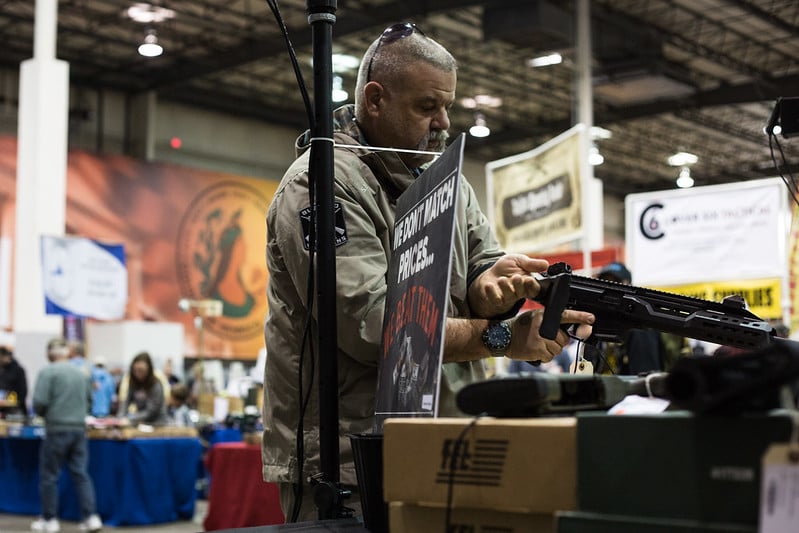 Gun show attendee browses the selection at the Sunday, March 25 gun show. A majority of vendors own retail stores around Virginia and traveled to the Richmond show with a smaller selection to sell. (Photo by Erin Edgerton)

Attorneys general for all but one of the top 10 states with the highest firearm mortality rate signed the letter expressing concern over use of the merchant code, according to an analysis by Capital News Service.

The idea that credit card companies will try to block lawful gun purchases couldn’t be “further from the truth,” Skaggs said. The merchant code is not a method to keep tabs on individuals, as the code does not provide product specific data, but could ultimately help law enforcement with investigations, he said.

“You would think the chief law enforcement officer of the commonwealth of Virginia, the attorney general, would side with law enforcement instead of mass shooters, but apparently that’s not the case,” Skaggs said.