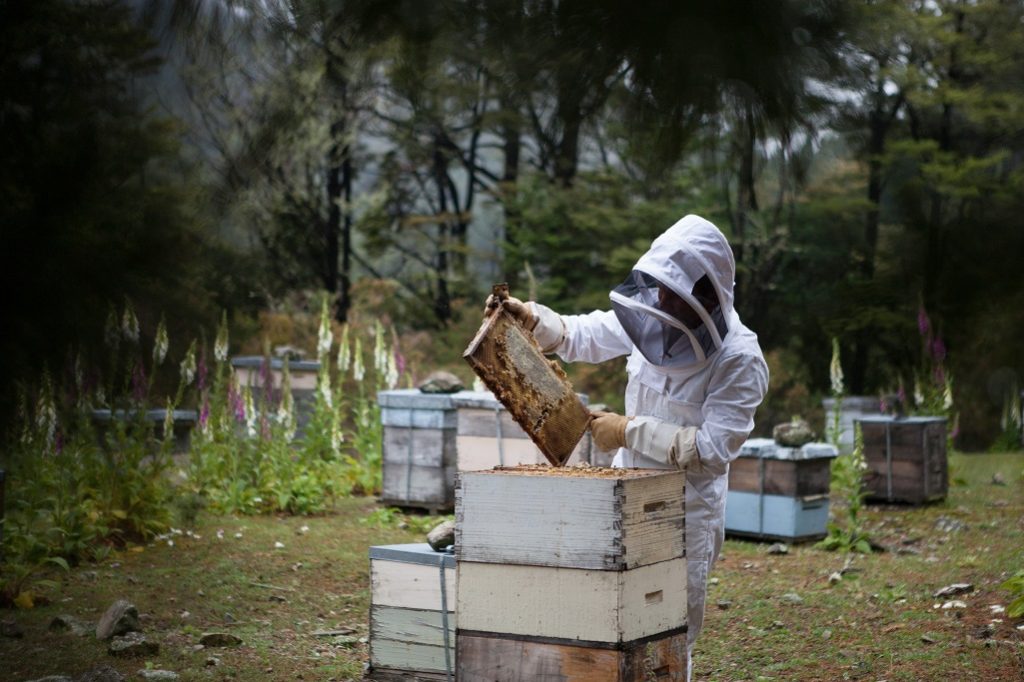 A new VA Dept. of Agriculture program gives you the opportunity to receive free beehives and equipment from the government. But is honeybee cultivation really the environmental solution it seems to be?

If the quintessential ecological battle cry of the seventies was “Save The Whales,” today it is “Save The Bees.” Since Ellen Page’s solemn narration stole our hearts and Jerry Seinfeld’s… interesting choice of a comedy-love story-environmental crisis-business exploitation-hero’s tale, we humans have been told: if the bees go, so do we.

It’s true, the bees are going out of style. When the U.S. Department of Agriculture began tracking hives in 1947, there were 5.9 million colonies. In 2008, that fell to 2.44 million. And while in 2017, the honeybees technically bounced back to 2.67 million, the perceived threat of a nationwide honeybee decline has gripped the public with hysteria, forecasting devastation for the 75 percent of plant life that requires pollination.

In response, municipalities are taking action, and that includes our own here in Richmond.

A few weeks ago, the Virginia General Assembly unanimously approved a $125,000 grant fund for the Beehive Distribution Program, a 2012 program that works to counteract the decline of honeybees in the state. The program is providing free beehives and equipment to Virginia residents who apply.

“The [honeybee] population has been in decline in recent decades due to disease and other factors,” said Chad Funkhouser, Legislative Aide to Delegate Tony Wilt, one of the bill’s co-sponsors. “Given that bees pollinate most of our food crops, the decline is certainly a concern, and the grant fund was a means to try to address that decline.”

Anyone age 18 or older can apply to receive up to three beehives, regardless of one’s financial status, location of residency, or even horoscope. This money is for the upcoming fiscal year, which begins July 1.

“On July 1, 2019, the Virginia Department of Agriculture and Consumer Services will begin accepting applications for fiscal year 2019-20.”

The program is run and reviewed through the Virginia Department of Agriculture and Consumer Services. Recipients are registered as beekeepers and required to maintain their hives and continue the cycle of life through public-assisted pollination, with annual inspection but otherwise no oversight. Elaine Lidholm, director of communications for the VDACS, was hopeful of the program’s results, according to news reports.

“Of course, it is too soon to tell how it affected the loss of beehives we’ve been experiencing for more than a decade,” Lidholm told the Daily Progress. “People had their hives operational for this spring, so we won’t see actual verifiable results for a while. We have long believed, and the General Assembly agreed, that one of the ways to counteract our losses was to create new hives and new beekeepers.”

State apiarist and VDACS representative Keith Tignor, who helped organize the legislation, stresses that stopping the decline of beehives in Virginia is our best, and may be our only, option. Plus, what Richmonder wouldn’t at least ironically love to own a fucking beehive? That would keep any ‘gram buzzing.

“Since the introduction of exotic pests and diseases of the honey bee, the number of beehives in the state has decreased by half,” Tignor said. “The Beehive Distribution Program will assist beekeepers, both current and those interested in beekeeping, in establishing new hives.”

At the current rate, bees are the world’s primary pollinator. Without them, the theory goes, we’d not only lose $212 billion in global economic value, we would probably also say “peace” to most fruits, vegetables, and of course, honey.

In fact, honeybees are, by most standards, an invasive species. Native Americans actually existed for centuries without honeybees, relying on other pollinators — butterflies, bats, hummingbirds, flies, and other bee species — to rear their crops. Plant life was thriving, for thousands of years. But as the English increased their presence in North America in the early 17th century, so did Apis mellifera, the European honeybee; or “White Man’s Fly” for the sole purpose of agriculture.

The effort to save honeybees overshadows the thousands of other bugs that have waned in recent years, bugs that are far more essential and cohesive to a functional North American ecosystem. The native bumblebee, Bombus affinis, has been added to the U.S. Fish and Wildlife Service’s endangered species list. Several other bees are listed by the IUCN as critically endangered.

And as Europeans carried with them disease and illness, so did the honeybee, which pushed much of the indigenous pollinators and many indigenous plants to near-extinction. Even after recognizing this phenomenon nearly a century ago, it was decided to double down on our efforts to preserve what nature never intended. And so, while bees may have a history of colonization almost identical to that of European colonizers, at the moment we may be stuck with them. Our own Sarah Kerndt put it eloquently in a July 2018 report:

“Rather than protect these native pollinators, the nature of our agricultural economy placed higher emphasis and concern on the honey bee, who have only been pollinating in North America for a few hundred years, versus our native pollinators’ several thousand.”

“Direct measures of reproduction and growth were investigated in only seven studies, with six indicating negative impacts to wild bees from the presence of managed honey bees,” said Victoria Wojcik in a study published by Environmental Entomology. “Three of these studies examined fitness impacts to Bombus Latreille and all three indicated reduced growth or reduced reproductive output.”

All of these facts reveal a less-than-positive aspect to the Department Of Agriculture’s current plan. But what is especially problematic is the lack of oversight as to where the hives will be located. When asked about where the hives will be sent, Funkhouser said, “I’m not aware of certain quotas per region or locality. I understand it’s primarily a first-come, first-serve basis.”

Trying to “save the bees” is far more complicated than it seems, especially when introducing pollinators into an area without an abundance of plants, like cities. According to researchers Francis Ratnieks and Karin Alton, from the Laboratory of Apiculture and Social Insects at the University of Sussex, this has been a major issue in London, where bees from urban hives, which number 25 per square mile, are forced to chase too few flowers, and actually make things worse.

“To have bees, you don’t need a beehive,” they write in The Biologist. “Just plant bee-friendly flowers such as marjoram… and lavender in your garden.”

Declining populations of honeybees and wild bees can be blamed on a myriad of reasons, from pesticides to diseases, but Alton and Ratnieks insist the one most underrated factor is habitat loss.

Alton estimated that each new hive in a city requires a reciprocal plot of flowers, and those placed in London would need the equivalent of one hectare (2.5 acres) of borage, a plant that attracts mainly honey bees, or 8.3 hectares of lavender, a plant that attracts more bumble bees than honey bees. And while most North American cities have a substantial plant life, this is something that should have been accounted for.

“It’s great that the public are concerned for bees and want to help,” Ratneiks and Alton write. “But this enthusiasm needs to be better channelled.”

Safeguarding pollinators has proven to be the most effective means of maintaining our ecosystems, and is the easiest. And while most North American cities have substantial plant life, caution must be taken going forward in how we build our cities for tomorrow.

Allocating funds for hives must mean allocating money and space for plant life to grow. Even a grant of $125,000 can go a long way, if used the right way. Otherwise we’re stuck with potatoes, carrots, onions, broccoli, and a whole bunch of grimy hipsters-turned-beekeepers, which isn’t a reality I want to exist in.

“We do need to be concerned about the bees, but we still need to be strategic in figuring out which ones really need help,”said Elaine Evans, a professor in the Department of Entomology at University of Minnesota, told Discover Magazine. “People think either the honeybee is going extinct, which is not true, or think they can help honeybees by keeping bees themselves. This actually sometimes does more harm than good.”

But that doesn’t mean we need to safeguard honeybees. Native bees have proven to be much better pollinators; they are active earlier in the spring, both males and females pollinate, and they are unaffected by mites and Africanized bees, which can harm honeybees. But because most species of native bees do not live in large colonies, they do not produce massive amounts of honey, and the little that they do produce is too costly for commercial retail.

So, that begs the question: are we trying to save our plants, or our honey?

Top Photo by REVOLT on Unsplash