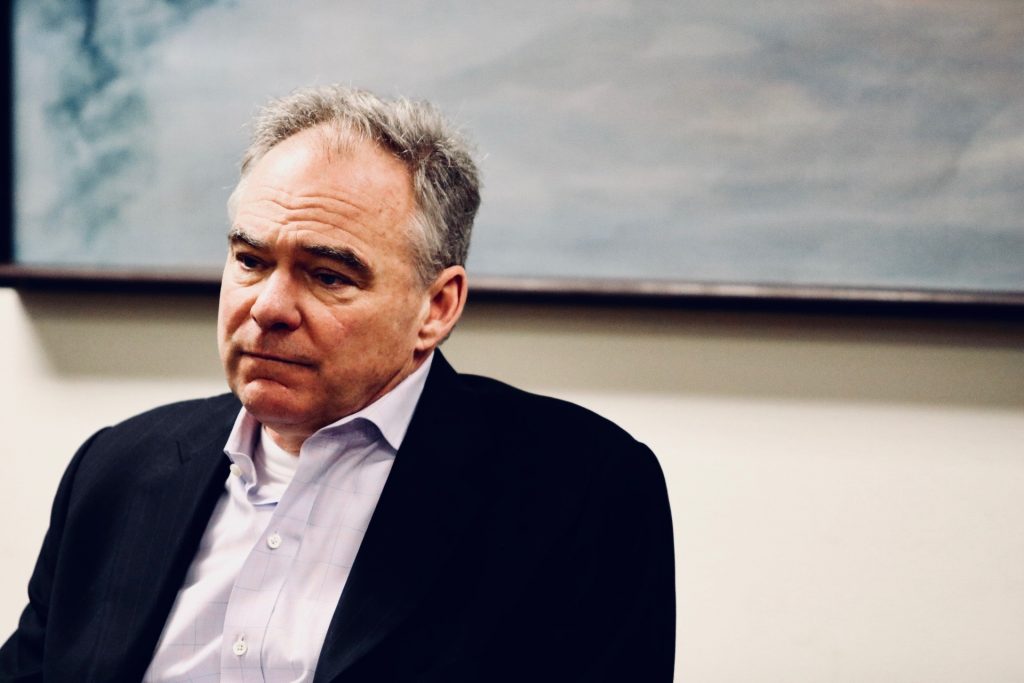 As the debate over gun control rages on, Senator Tim Kaine held a roundtable on gun violence with concerned parents today in downtown Richmond. The roundtable, sponsored by Moms Demand Action, consisted of about 35 people who spoke with Kaine at length about their various concerns over gun violence. While the issues were varied, most of the topics had a consistent theme; they focused on the prospect of teachers being armed, mental health requirements, and the role of law enforcement. Sarah Harper, the president of Moms Demand Action in Richmond, opened the floor by thanking the Senator and asking him a very simple question about whether or not legislators are ready to pass sensible gun legislation.

The senator remarked by stating that his colleagues understand the dimensions of the issue. “My legislative colleagues, a strong majority of them understand the dimensions of this scenario here, and they feel like it is a shameful thing.” He went on to say, “If I could have a secret ballot on the Senate floor on background record checks or [the] assault weapons ban, we would have a big plus margin. So do they understand it? Yeah. Do they know we need to do something? Yeah. Are they ready to do something? That’s the question.” He quickly alluded to the NRA, highlighting their vulnerability. He noted that they know just how unpopular their positions really are, but through obfuscated marketing campaigns, have frightened “enough folks to vote for reasonable rules.”

Once the floor opened up to questions, the conversation quickly turned to arming teachers. One participant, a school teacher of nine years, said, “I am very concerned about putting guns in the hands of classroom teachers. I can’t imagine the danger that would impose on me and the students.”

Indeed, President Trump, in the days following the mass casualty attack at the school in Parkland, Florida, tweeted that “Armed Educators (and trusted people who work within a school) love our students and will protect them. Very smart people. Must be firearms adept & have annual training. Should get yearly bonus. Shootings will not happen again – a big & very inexpensive deterrent. Up to States.” This has set off a debate among legislators and educators about the role of firearms in schools.  While sympathetic to the idea that school security needs to be discussed, Kaine was dismissive of arming teachers, saying that teachers should “not be expected to be security professionals.”

Mental health was another issue that drove the conversation, with one participant stating that there needs to be specialized counselors in schools to deal with these issues. Rebecca Forman, a mental health professional from Washington State who moved to Virginia, compared the two, saying, “Psychologists do integrated primary care in high schools [in Washington]… and have an increased mental health presence, and work directly with the students,” something that does not happen here. She went on to say that if there is so much conflict over the role of guns and that politicians are not willing to ban certain kinds of weapons or provide background checks, then teachers need more training in mental health education, not more “thoughts and prayers.”  The senator added on to this, claiming that the Commonwealth was actually quite weak in mental health treatment programs.

Kaine, for his part, has been an advocate for stricter gun control laws, which, according to his website, include, “expanding mental health services, background record checks prior to gun purchases, and responsible limits on combat-style weapons and high-capacity magazines.” He was also a supporter of the Manchin-Toomey bill, which would require background checks on all commercial sales of firearms, and strengthening the “instant check system” by making all state records available on the National Instant Criminal Background Check System (NICS).

The conversation over gun control has been in a perpetual state of paralysis in recent years, yet the shooting at Marjory Stoneman Douglas High School in Parkland, Florida on February 14 has reinvigorated the debate, due in large part to the activism of the shooting survivors. The teenagers leading this activism have been visible nationally, taking their politicians and the NRA to task over gun control in public forums such as a CNN town hall and on the floor of the Florida legislature.

This was something Kaine was keen on bringing up, saying in the press conference after the roundtable, “The activism of the young people in the aftermath of Parkland can be helpful because they have a way of shaking us out of complacency, indifference, or hopelessness. I think we owe it to these young people to act.”

In a recent CNN poll, seven in ten Americans responded that they favor stricter gun laws as a result of the most recent mass casualty attack. This is the highest level of support for regulation since 1993, and is playing out in a variety of ways, with major corporations such as Delta, United, Hertz, MetLife, and others severing ties with the National Rifle Association — which represents a marked shift in the gun control debate. Nonetheless, the NRA has remained intransigent. Their CEO, Wayne LaPierre, said this week that the reaction to gun violence is “completely ridiculous.”

The roundtable ended with a letter being read from April Bartlett, an elementary school arts teacher in Henrico. Among other things, the letter asked, “How can I carry the weight of protecting the precious lives of my students with my own, and the guilt of expecting my son’s kindergarten teacher to do the same?”

And the debate rages on.

Photos by Landon Shroder. John Donegan contributed to this report.

Virginians Debate Whether COVID-19 Vaccine Should Be Mand...

At such a time that a COVID-19 vaccine becomes available, should Virginians be required to get it? The state's health commissioner thinks... READ MORE

Virginians Debate Whether COVID-19 Vaccine Should Be Mand...

At such a time that a COVID-19 vaccine becomes available, should Virginians be required to get it? The state's health commissioner thinks... READ MORE