Twenty years. Not many restaurants have been able to keep their doors open that long. The business isn’t for the faint of heart and with new spots sprouting up left and right, it can be hard to maintain your popularity among the competition even if you can stay afloat.

Bandito’s Burrito Lounge owner Sean McClain has managed to fight the odds and not only keep his doors of his Museum District restaurant and bar open, but adapt with the changing times and stay relevant to keep his customers coming back.

But what’s his secret? I spoke with McClain recently to get a little back story behind Bandito’s, from their humble beginnings, to the smoking ban, to the move to Devil’s Triangle to find out what has made them a success ahead of the restaurant and bar’s 20th Anniversary.

“In some ways it seems like a lifetime, in another ways, it seems like I blinked my eyes and all of a sudden I’m 50 years old and Bandito’s opened 20 years ago,” McClain said of his business.

The longtime restaurateur and father of three opened Bandito’s Burrito Lounge back in March of ‘97 at the corner of Cary and Laurel streets (now Mojo’s) and moved to its current home in the Devil’s Triangle at 2905 Patterson Ave. in 2002.

“We hit the ground running pretty well,” he said.

A Virginia Beach native, all of McClain’s family lives in California and McClain said he grew up eating a lot of Mexican food. The cuisine was always his favorite, so he decided to try his luck with a Mexican restaurant, something he said was lacking around that time in Richmond.

“Mexico was the only place, there was only like one location, it’s totally different now, but at the time, there just wasn’t a lot of options,” he said. “I just tried to throw something out there that was traditional and non-traditional. I call it Mexi-Cali, fresher, more inventive, more colorful…where authentic meets a new infusion of the modern approach to it.”

While this was his first foray opening this type of restaurant, he was by no means a stranger to the industry. He’d been working in restaurants since he was 15 and opened Star-Lite along with Rick Lyons (Supper/Lunch) in 2002. He also worked at Sidewalk Café for six years.

About five years in at the old space, they realized their current location on Patterson, which was formally the Ser Fish Station, would soon be up for grabs.

“We got wind that this place was opening up, even though Devil’s Triangle was still a little rough at the time…so we thought heck, parking, a little more space, let’s make a move,” he said.

“Also, the bottom was changing…it started fizzling out a little bit at the time and we felt like the traffic had slowed and that we might have a better opportunity to create a new stream of business at this other location.”

Bandito’s opened at their current spot on Patterson in 2002 and since 2009, it’s been just McClain running the show. Prior to that, he ran the business with Lyons, and fellow RVA restaurateur, Johnny Giavos (Kitchen 64, 3 Monkeys, Sidewalk Café).

Since moving to the Devil’s Triangle, they seem to have hit their stride, even though the move to that area at the time was a risky one.

“It was an affordable, cool place to live in the area, but the actual Triangle was still rough around the edges,” McClain said. “Café 21, The Ritz and The Felix…they weren’t super family-friendly. There was some rough characters and fighting.”

A 2010 article from the Richmond Times Dispatch details the interesting, albeit dicey history of the area, which dates it back to the 1920s when trolleys came through and it was home to the city’s second Ukrop’s and a hospital.

From the 1970s through the 90s was when things took a darker turn according to the RTD, with prostitution, drugs, and robberies becoming all too frequent in the area that spans less than a mile.

“If there was any corner of Richmond that was notorious, it was this corner,” said Rich Holden, former owner of the bar Felix, and current partner in Bandazian & Holden (a partial owner in RVAMag), in the interview with the RTD.

But McClain said the area was on the rise again once he moved into the space in the early 2000s, leading to more restaurants opening up in the corridor. 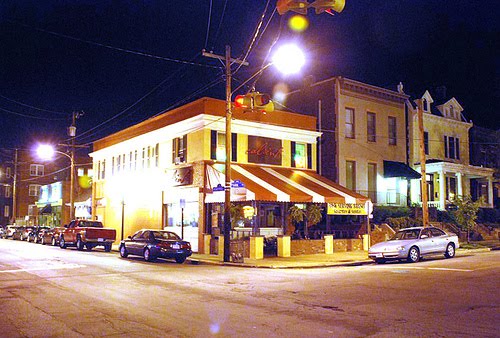 “When I got here it was at its last days of Devils Triangle…it’s not like we came in here and cleaned up the Wild West, but it’s definitely climbed in the years we’ve been at this address,” he said. “When we came here, I feel like it kind of settled things a little bit and then other places opened soon after. I keep hoping people will continue to embrace it.”

When establishing Bandito’s Burrito Lounge, McClain said he wanted something that’s unique, and one to keep people coming back, but also reflective of him.

“I wanted to make it a little more of what I love, which is a concentration on good Mexican food, good clean service, and a bit of a rock and roll atmosphere,” he said.

And he did just that with his love for music, turning Bandito’s into a hub for local and national punk, rockabilly, metal and every sub-genre in between with his free live music on Sunday nights.

“There really wasn’t much to do on Sundays, so I started having these free shows on Sundays and the last nine years I’ve had pretty much every local band in town and a lot of nationally touring old school punk rock bands,” McClain said.

Major punk bands like The Dickies, Agent Orange, and The Dead Kennedys have graced the stage at Bandito’s as well as local groups like Imaginary Sons, Lady God, Fat Spirit, and Magnus Lush.

“Banditos is a great place to play,” said John Graham, vocalist/guitarist for local power pop/garage band Fat Spirit. “Darin (Pilger) is the man and they treat the bands better than almost anywhere in town! Always a cool vibe and people get wild there.” 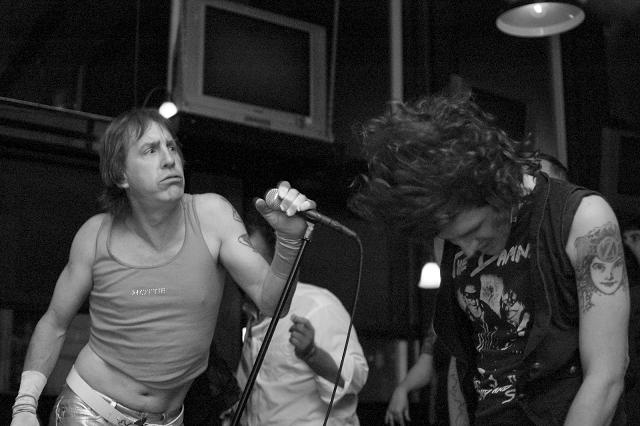 “Bandito’s is one of the only venues in town to consistently offer a guarantee to local musicians,” Falen said. “It definitely helps bands be able to afford recording, touring, merch. Darin is the best!”

According to Sea of Storms bassist John Martin, Bandito’s is “the beach upon which all punk washes up.”

“I mean that in a good way, I moshed to Guttermouth there,” he said. “I’ve only seen people make out while we were playing on two occasions, and both times it was at Bandito’s. It surely says more about Bandito’s than it does about us.”

A punk rock kid at heart, McClain was able to take his love for the genre and spotlight up and coming as well as established bands to Richmond.

“It became possible to have these bands that I’d kill to see again and bring them in here because no one else was having them and having these for free was a bit of good will to the community,” he said. “We’ve tried to give the do-it-yourself punk rock, metal, avant-garde, alt music scene a local leg up.”

McClain has actually been in his own band, Chrome Betty Disco for over 20 years for those that didn’t know, and hosting bands that are trying to make a name for themselves has in turn, carved out a place for the restaurant in the music scene and played a significant role in its success.

“We’ve found a nice niche there, it’s worked out well,” he said.

For several years, Bandito’s has also been one of the venues to host a show for the annual Punks for Presents, a series of shows around town featuring holiday-themed cover bands to benefit the Children’s Hospital of Richmond.

But an eclectic and steady musical lineup isn’t the only factor drawing a wide range of patrons to the restaurant and bar. Bandito’s also hosts Karaoke every Wednesday and with its 18 TVs, it’s been a popular spot for sports fans to gather for years.

“We’ve had a football paradise on Sundays for the whole 20 years, we can have all the games on, if you’re into sports and football…I always say we’re not a sports bar just a place for sports.”

While McClain created a refuge for punk rock bands and fans alike and a spot for the 80s dance music lovers to dance the night away, McClain wanted to start appealing to more families so in January 2016, the restaurant and bar went non-smoking.

“It almost became strange that there was smoking in bars for these young folks so we thought, ‘let’s bite the bullet, we’re going to piss off a few people and it certainly did,” he said.

Virginia legislation changed in 2009, citing that smoking areas must be “structurally separated from the non-smoking areas of the restaurant and up until that point, Bandito’s remained of the few places that still allowed smoking.

“I lost a few regulars…it took a little dip at first alcohol-wise, but it also took an upturn food wise,” he said. “Frankly, I’m more interested in appealing to families because there’s always going to be people who want to come drink, but families are picky, they’re not going to bring their kids into a place that smells like an ashtray.”

It’s been a little over a year and McClain said business has leveled out since then and he’s happy with the decision.

When asked what has kept his restaurant successful and thriving all these years, McClain didn’t cite the music, events, or karaoke. He kept it simple.

“I’ve always said you have to have quality of your product, service that people can appreciate, and a generally safe environment, if you have that, unless your food’s terrible you should be successful,” he said. “Everything else is moving parts, the football, the punk rock bands, the karaoke, they’re all great, but they only exist because the place has the fundamental bedrock of what I would call the elements of a decent restaurant.”

For him, that’s the most important, he’s not worried about being the next hip and trendy spot in Richmond.

“What I’ve always aspired to be is something with legs, something that’s going to stick around for a while. Stability is the game.”

But none of that would be possible without his employees, according to the restaurateur.

“I’ve had people that have worked here for 18 years, 15 years, we have lower turnover than most places by far and that says something about a place,” he said. “People have raised families here, I’ve had people work here, leave and come back. It’s a testament to a safe place to work and a place they can count on.”

And never once in all these years did McClain think about calling it quits.

“Some people have a lot of money and open restaurants, I had nothing and when I opened Banditos I used every nickel I had and it wasn’t a lot of nickels at the time, I was petrified,” he said. “For me, it was always never, this is what I do, this is what I’ve always done. I hope I’m leaving a positive legacy.”

To celebrate 20 years in business, McClain will throw a party at Bandito’s this Saturday, April 8.

“We’re going to be doing an outdoor music event, family-friendly event, outdoor bar, big stage outside, multiple bands and stuff,” he said. “It will be a nice to celebrate a pretty impressive milestone, for any restaurant these days.”