Richmond’s Citrus City Records is on a steady streak of discovering the hidden gems in Virginia’s vast pool of musicians and bands. Fat Spirit and Lance Bangs are just a few of the greats that have released solid tunes off the local indie label, and underground Charlottesville trio, ING, is the latest group to release an EP through them.

This experimental indie rock band, featuring Hannah Balesi (guitarist/vocals), Garen Dorey (bassist), and Will Mullany (drums), have an interesting sound. You can’t really pigeonhole them into any one genre or lump them in with a lot of other indie bands, and that’s what I like about them. Its hazy and minimal, but with some melodic guitars for a jangle/slacker pop vibe. If you’re into Beach House, you will probably like ING.

ING will deliver their debut five-track EP, which was recorded at Gatehouse Studios, on cassette on Sept. 30. Luckily, the band has given RVA Mag and music lovers a little sneak peek of what’s to come on their record with the newly-released single, “Dust.” This song goes off in all different directions, Balesi pulling you in with her vocals, and Mullany keeping you on your toes with the switch up of the drums.

You can preorder ING’s self-titled EP through Bandcamp, and make sure you catch the trio at Gallery5 on Oct. 26 alongside Guerilla Toss with Bermuda Triangles, COQ, and Aesthetic B.

Lofties, a local emerging bedroom pop band featuring Andrew Brown and Austin Ruhf, is bringing a nice, smooth, mellowing sound to Richmond. This duo is churning out dreamy lo-fi experimental sounds with their latest EP, Bad, and make a point to focus heavily on their visual choreography for all of their videos.

“With this camera, I filmed a lot and once I got Adobe Premiere, I started editing pictures into the video that had meaning to us. Every sound, every noise I record myself with a handheld recorder as well,” Brown said of their process. “That way everything is 100 percent original and meaningful and when we finally look back at this years later, we can really love what we did.”

Both Lynchburg natives, Brown and Ruhf have been friends since they were six, which Brown said is the reason why they work so well together as bandmates.

The musicians started playing music around six years ago, but Lofties didn’t start to take shape until more recently.  “We officially started writing and playing together as a unit last February, but for years we’ve been just messing around,” said Brown.

Lofties’ latest EP, Bad, was recorded in their own apartment and released last February. The album features five tracks produced by Brown and definitely showcases them playing around with their sound and style.

“It kinda just started song by song, we started experimenting more, wanting to do our own thing as opposed to sampling other artists,” said Brown. “ I just kept writing and making weird sounds we thought were cool. We’d play around a bit and then start recording it, and slowly, the puzzles pieces just came together.”

And the album was a very personal one for Brown to create.

“The inspiration for the album itself was a mix between losing one of my closest friends and about a girl I was with at the time,” he said.

In addition to Lofties, Brown produces under the name Captain Pizza, which he started when he was 21 living out in South Lake Tahoe, California.

“I had just moved out there and I was desperately looking for a job. That’s around the time I really started getting into music because, in a way, music was my saving grace,” he said. “I started making everything from sampling bigger artists to futuristic atmosphere beats, all the way to really pop type sounds where I would sing over-top of it.”

And the inspiration for the name came from an unlikely source as well.

“The name itself came from a girl bringing pizza to my house and texting me after telling me how I was cute, and subconsciously I came up with the name Captain Pizza. I felt it was weird enough to grab people’s attention and really want to look into it,” said Brown.

While there are no shows on the books yet for Lofties, the band continues to carve a name out for themselves in the Richmond music scene playing house shows. The group said they want to get more songs and add a few more musicians it seems before playing bigger venues.

Currently, they’re working on an upcoming release of more music, so keep your eyes peeled on RVA Mag because this is a project we are looking forward to hearing from more.

Whenever siblings or family members get together to make music it’s always a good time and there’s always a good story (or five) to be told. You can feel the closeness and love in the music, making it all the more fun to listen to.

Such was the case when I chatted with brothers Jonathan (JP) and Wes Parker, the duo behind Ruth Good, an up and coming bedroom/indie pop band in Richmond’s music scene.

You might recognize Wes’ name from his solo projects, or his bass playing and songwriting in the indie pop band Camp Howard. The two also play in Poser, a local jazz/alt-rock band along with their brother Alan, but the brothers have recently been toiling away at their own project, much different than the music they both have been making. During our chat at Chiocca’s on a rainy evening over beers recently, we talked music, Stranger Things feelings, musician beefs, and everything in-between, but more importantly, their new debut EP, Spliff.

The boys just dropped the seven-track EP via Richmond label  Citrus City Records and musically, it ebbs and flows ever so slightly depending on who’s singing on which track.

The two started recording around April and into the summer, at what they call “Chili Dog”, which is really their dad’s house, in Bon Air. 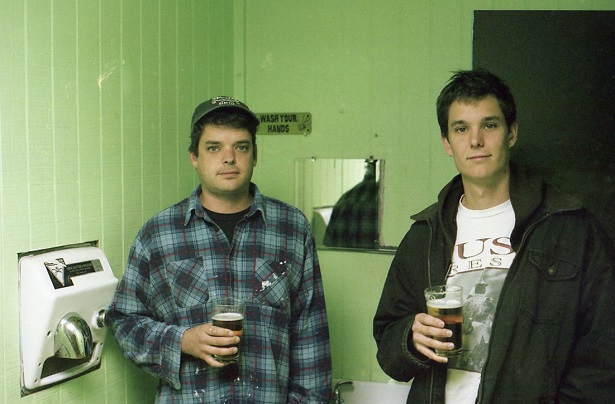 “Getting out to Chili Dog enables us to get some decent sounding drum takes and experiment with micing drums,” JP said.

But the brothers also did a fair amount individually in their own houses for the split EP, with the first four tracks attributed all to Wes, and the last half of Spliff featuring all vocals and instruments by JP. Wes does all the instruments on his songs and JP plays them all on his, with mostly separate writing. Their brother Alan also plays bass and lead guitar on “Shooting Range” and lap steel on “Ice Water” making it truly a DIY family affair.

“That’s why they all sound kind of different and the mix is all different,” JP said.“I have equipment that I’ve had forever, but we recently got this analog {mixing} board that was given to us from a friend of mine (David Wattenbaugh} who works at Overcoast Music, ” he added explaining the recording process.

Spliff draws you in from the get-go with the catchy 42-second intro, “Mosquitoes”, and keeps your interest piqued with tracks like “Milkshake Boyz” and the second track, “Got My Penz” is equally catchy, fun, and poppy- paving the way for the rest of the EP.  The love song called “YLIF” (Your Love Is Enough) is one of my favorites and a bit of a different tone, and very personal for JP.

“When I moved back from Charlottesville, that’s the reason we were both ready to start working on music, we were both so bent out of shape,” JP said of the song. “It’s not the first time I’ve gone through shit like that, but {I had} anxiety to the point where you’re always at a simmer…I wasn’t really working and I remember lying on the living room floor in between recording takes…”

At the time, both brothers were going through serious breakups, and with any sort of heartbreak or pain, stems good music.

“I think recording and having something to focus on was our thing,” Wes added.

JP and Wes formed Ruth Good, which is named after their grandmother, around the time JP moved back from Charlottesville, but it wasn’t really a conscious effort, they just wanted to make music and get it out there.

“At that point, we were up at Shamrock Pub and it was just kind of a fantasy at that point,” Wes said. “I wanted it to happen I just didn’t know if it really would.”

JP added the two talked about putting their music out when they started recording material at their dad’s house. Wes was also writing extra songs that didn’t make it into Camp Howard’s sets that he wanted to put to use.

“We never really started Ruth Good, but we started recording each other’s own songs,” JP said. “Wes had songs that Camp Howard wasn’t necessarily going to do…”

JP described their sound as “slacker pop, jangles, and weed” which I think pretty much sums it up, but I will let you guys be the judge. “Slacker Pop” was actually a term given to them by Manny Lemus, the mastermind behind Citrus City, whom they met through fellow Citrus City band Lance Bangs. Lemus found the duo’s music online and a partnership sparked from there.

“Weston put up some songs online and Manny listened to them and was like ‘Dude this awesome take ’em down! We’ve got to do a tape'” said JP.

After that, the two dropped Spliff Oct. 18 and listeners will be able to cop cassettes courtesy of Citrus City.

Ruth Good hope to embark on a mini-tour sometime soon perhaps by next year, and the brothers are already recording new material and hoping to churn that out sometime in the spring so be in the lookout for those as well.

Dry Food, the debut record from Boston’s Palehound, is a simple and modest entrance into the world for songwriter END_OF_DOCUMENT_TOKEN_TO_BE_REPLACED