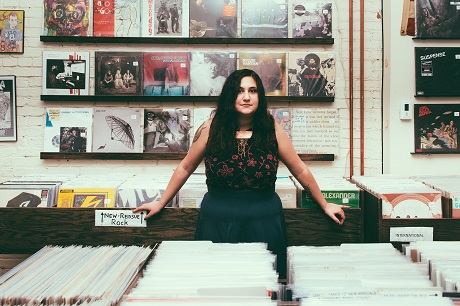 Dry Food, the debut record from Boston’s Palehound, is a simple and modest entrance into the world for songwriter

As worn out as the alternative rock tag-line in 2015, there’s perhaps no better phrase to describe Dry Food as it encompasses so many different genres it’s in short runtime of just under a half hour. Bedroom pop, lo-fi recordings, jangle pop, folk; hell, even a bit of noise rock pops up as heard at the end of the album’s central track “Healthier Folk.”

Since the styles of each song vary so wildly, it allows Kempner’s truly one-of-a-kind songwriting to truly shine. Her unwavering way of expressing empathy and uncertainty opens up each song’s musical space and gives depth and importance to melody breaks and bridges that could seem completely random in other contexts. As is human nature, critics have tried their best to find rightful comparisons and have lumped her in with heavyweight contemporaries like St. Vincent and Laura Marling. Really though, Kempner is in a class by herself with songwriting already mature beyond her years that’s only going to get better.

With songwriting as twisty and singular as hers, it’s almost a given that there’d be no formula to Kempner’s songwriting, though she let us know that that wasn’t from lack of trying. “When I first started to write songs, I would sit down and try to figure out what was the most constructive way to do it, but that would always be the worst stuff I would write. The best stuff I would write is just stuff that came to me. It could be when I was driving, walking, or even grocery shopping. I’d just think of a melody in my head with a bit of lyrics and flesh it all out from there.” Despite no formula or set way that Kempner attacks a song, she does utilize many tricks and tools to help harness the haphazard way the songs come into her consciousness. “Voice recordings are crucial really anytime I have an idea. Even if it’s not going to be a hit or something particularly great, I still record it because I’ve started to take parts of things and ideas and push them together into a singular idea. Cutting and pasting so to speak. Recording everything really helps further that along.”

Palehound is virtually a solo vehicle for Kempner, but she does employ a backing band out on the road to help make her live performances noteworthy. This band featured a rotating line-up for a period of time, but since moving to Boston, Kempner has solidified Palehound as a trio with two additional musicians behind her even if it’s still not something she pays much attention to. “I don’t try to define that backing band in anyway. I think Palehound is me with a backing band just because I write and record everything on the record.” It comes off a bit abrasive in that regard, but Kempner was quick to clarify to us that it wasn’t the case of being a controlling overlord with her music, but rather just the way the music really comes about. “It’s not a matter of me not wanting other people to help with the songs or record. It’s just that when I write a song, I automatically demo it in my room and play out everything. It’s not like I go out of my way to avoid working with them or other people. It’s just the way I do it and it’s just more fun for me that way too. I just don’t think I function as a songwriter with others.”

Kempner’s getting acclimated to the idea of bigger tours this year as Dry Food continues to pick up steam. So far, she’s only gone as far as a four week tour, but she’s pretty aware that a three to four month non-stop tour is certainly on the horizon. “It kind of scares the shit out of me a little bit to know that it’s in the cards for me. As much as I like four week tours over one week tours, it’s exhausting. I could handle two months I think, but thinking of three and four months out on the road is really something else completely.”

The forthcoming stress is worth it to Kempner though because it means her album is exceeding all expectations. Publications like Pitchfork, Rolling Stone, SPIN, and more have all gone out of their way to emphasize the truly unique talent Kempner brings to the table, something Kempner’s grateful for even if it’s not something she went in thinking about. “The press is great and really flattering. Honestly, the best payoff is not the words, but the fact that I’m playing more shows and getting wider audiences. The praise is great, but I didn’t really go into the record with much expectations anyway. I did that to try and protect myself. It’s a record I’m really proud of though I did worry over things like it being too short since it only has eight songs. But I’m proud of it and I didn’t want to go into this expecting anything in case I would get a serious let-down. Obviously I didn’t, but it’s helped me stay levelheaded and really focus on the music.”

It’s going to be a challenging task for Kempner moving forward to stay levelheaded and focused as her stock continues to rise and the requests begin to increase exponentially, but after hearing how clear and distinct the voice is on Dry Food, staying focused is hardly going to be a concern for Kempner in the future.

Palehound plays The Southern tomorrow night in Charlottesville opening up for headliner Mitski in a show put on by WXTJ. Doors are at 6:30 PM and tickets are $10 in advance, $12 the day of the show. For more information on the show, click here.