If you frequent any of the breweries in town, it’s likely you’ve seen a royal purple truck with a feisty chicken emblazoned on the side serving wings and other Cajun-inspired dishes. And this summer, that truck will settle in with a place of its own in Northside.

Manchu has only been slinging wings, fried rice, fries, shrimp po’ boys, banh mi, and gumbo in Richmond for a year, but its history goes back more than three decades with a family business that originated in New Orleans.

Although a staple in the Big Easy and highly popular with the locals, there are no frills about Manchu, just a simple corner store near the French Quarter that has served up wings, po’ boys, fried fish, and yakamein for 35 years. 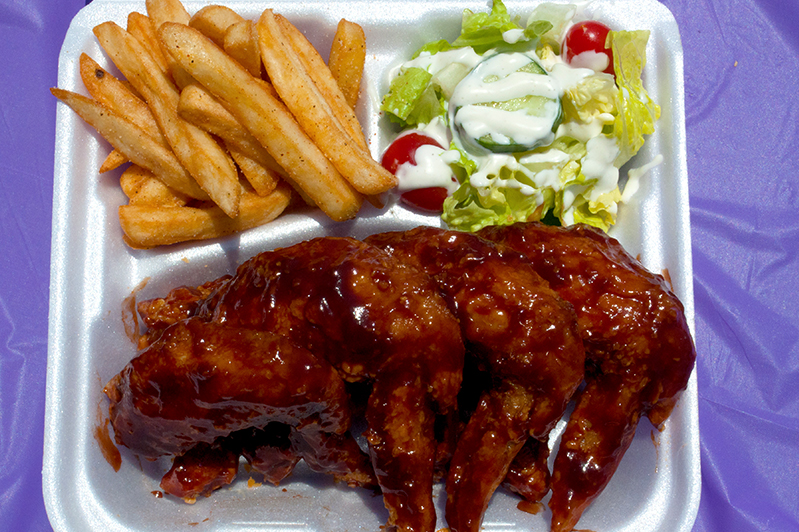 Nguyen’s cousin Tommy and his wife Yen Pham, along with his father Kevin, founded the original Manchu, and while Nguyen moved out of New Orleans when he was 10, he returns every year to visit the store and family. His passion for cooking, however, wouldn’t come until years later.

His parents, originally from Vietnam, moved them to North Carolina, then Martinsville, Va. where he grew up. The food truck operator finally planted roots in Richmond in 2005 after transferring from UVA to J. Sarge in 2005 to study biology of all things.

When not in school, Nguyen spent his time working odd office jobs before realizing that wasn’t his true calling.

“I was like, ‘this is not me,’” he said. “All these office jobs I’m getting, I’m helping a lot of people, but I’m not helping myself, it’s not that fun,” he said. After that, he left school and tried out a career as a DJ in Richmond and Washington, DC for 10 years before finally deciding to take up the family business.

“I’ve always liked to cook at home or for my friends, so I thought why not open a food truck. I’ve always talked about it, but never pulled through.” 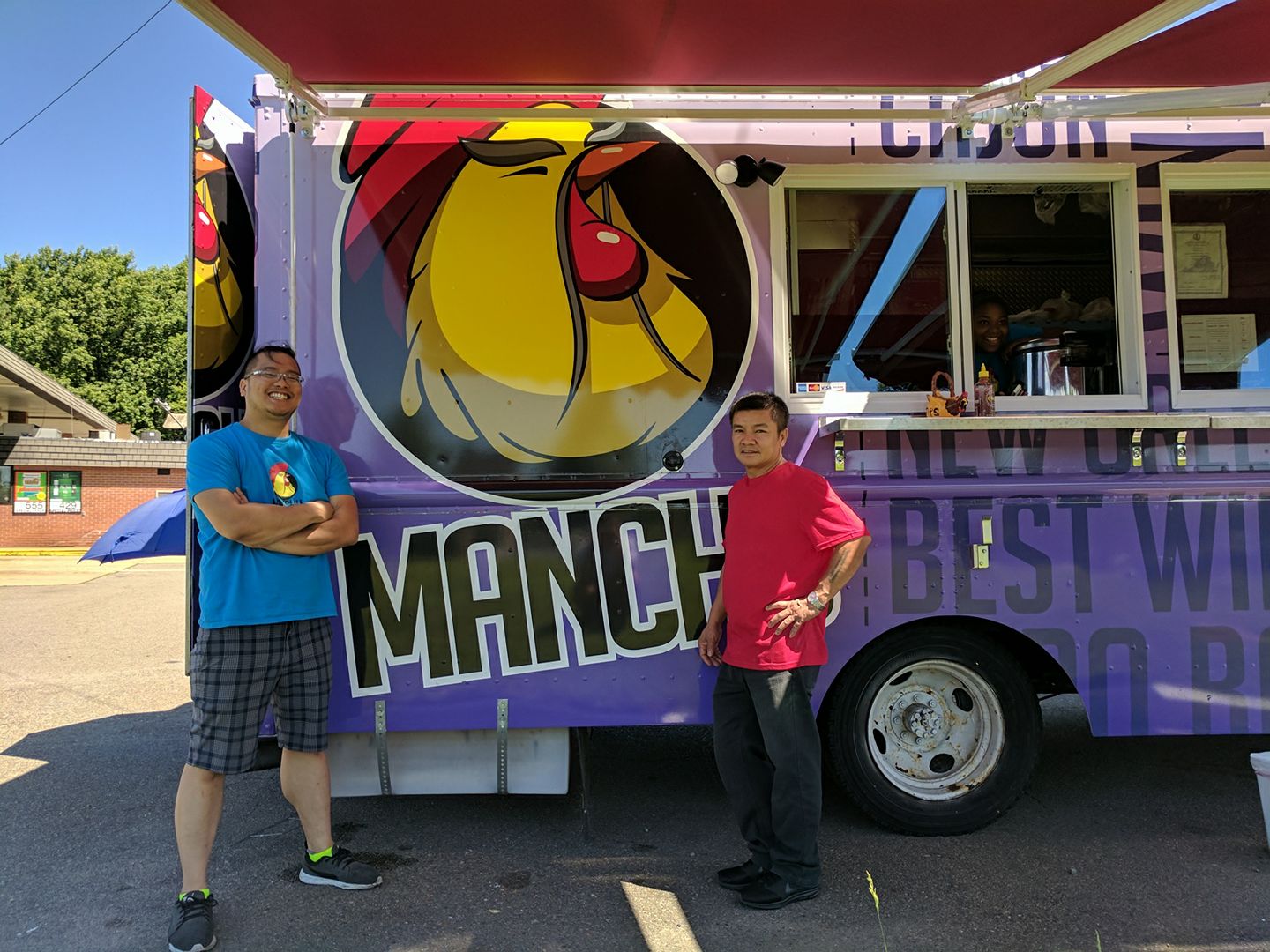 Nguyen often urged his family during his yearly trips to visit to expand the restaurant up north, and while they were content where they were, Nguyen took the leap to take on the venture himself.

From January to April 2017, he studied under the tutelage of his cousin and dad learning the inner-workings of Manchu. And his time may have been brief, but it was no easy task.

“I went down there and studied for like four months and did everything from the kitchen work, the recipes, the cooking of the fried rice, the chicken, and marinating,” he said.

In 2016, he bought his food truck and the following year, Manchu was up and running in Richmond, starting out in Ashland serving employees at Owens & Minor and Amazon, followed by weekly trips to SunTrust, and growing to regular gigs at local breweries like Ardent Craft Ales, The Veil Brewing Co., Hardywood, and Isley.

Richmond’s Manchu food truck is similar to the NOLA corner store, but with Nguyen ‘s spin on it. The truck sells traditional BBQ, sticky garlic, and ghost pepper wings, which he uses ghost pepper powder to make. “It’s not one of those that things really spicy, but you can taste the ghost pepper.”

As for the recipe for the wings, Nguyen is keeping most of that under his hat, only divulging that it is dry-rubbed and brined for 24 hours. And while the success this year-old food truck has received from the locals has been great for Nguyen, he said expanding with a store of his own was always in the cards.

“The plan was to get people to know who Manchu is, and why we’re here. I wanted to open a store in the first place, but we wanted something that was mobile,” he said.

His new North Avenue restaurant, which he leased in January, will be takeout only, and while he eyed bustling neighborhoods like Scott’s Addition, he said after serving the Northside community, he knew it was the perfect place to set up shop.

“I felt like to be at home, just like our store down in New Orleans, we wanted to find a spot that caters mostly to the kind of people that fit our demographic, and Northside has been such a blast for us,” he said. “We park our food truck out there every now and then, its right next to a library, we made a huge impact in that area.”

All the residents that live there and the heavy foot traffic were another reason he wanted to open his takeout restaurant there.

“I like how people just walk around, that reminds me of home in New Orleans,” he said. “Just outside hanging out. We want to make that impact in that community.”

Since opening the food truck, Nguyen has used a commercial kitchen on West Broad Street, but will move operations to the new shop when it opens. And with only four employees, the roving truck will come home to roost for a bit while the takeout spot gets off the ground, but keep an eye out, as it could pop up at an event here and there.

With the new takeout spot, Manchu will still serve up its signature wings and po’ boys, but Nguyen also plans to experiment with some new recipes and expand the menu.

“We’re going to have some specials too. We have a recipe for crawfish boils and daily specials such as Pho Boys, so basically all the ingredients of Pho, but you eat it like a French dip,” he said. “We do want to create a Mambo sauce, we’ve made it before, but we still want to play with it, it goes on the wings and the rice.”

His mother, who also worked on the food truck, has come aboard to be the chef for the restaurant. Nguyen handles all the seasonings and prep for the wings, and his mother makes the gumbo and roasted chicken for the business.

The New Orleans Manchu, which was once a Chinese restaurant, doesn’t have a logo, and is just labeled as Manchu Food Store. Nguyen plans to model his Richmond takeout restaurant after the flagship store with a mural of the NOLA sign, along with his unmistakable chicken logo, of course.

“I just want to make sure we are the staple wing place to go to in Richmond, that’s my goal, I’m just going to work my butt off to make that happen.” Manchu will be open sometime in August six days a week from 10 am to 8 pm.