It’s a daily process, measuring my capacity for whiteness. It’s a self-exercise for a black woman but also determines where I place my energy for the day.

While assessing myself and my capacity, I start the morning with the social media scroll before I become engulfed in a toddler routine. As I sip caffeine and review my timeline, I notice rarely a day goes by where I don’t see someone being triggered by conversations about race.

I attempt to surround myself with people of all backgrounds who have the best intentions. Yet, even when the race conversation is rooted in positivity, I notice a theme with my white associates. The theme is white people’s overwhelming under awareness of the off-putting messages they send to black people. These messages can be delivered as words, non-verbals, tones, laughs, choice of wording, and historical references that you don’t realize are racist as fuck. If you’re interacting you’re sending a message, and that message could be felt as aggressive to black people. It seems that more work should be done to ensure that white people’s intended message is received by black folks – especially in this day and age.

Because of this, I have started to wonder why those who have the same goal of progress continue to fail miserably at these discussions. Perhaps it is because white people have yet to assess their own capacity for blackness. Even just having a white person say “black” when referring to a person without a facial twitch is truly impressive. As a result, I can only assume that making space for blackness is not a thing for most white people.

This discussion can obviously be applied to any population. But for the time being, I’m using what I know growing up as a biracial black female in the suburbs of Chesterfield County. I will not claim that my experience makes me a white people expert, but what I can do is speak to my own exposure.

This exposure will include the obvious fried chicken jokes, the natural hair being “interesting” compliments (eye roll), right down to the offensive messages that I know – in my heart – that white people don’t even hear themselves say. For example, when white people talk about race, I often hear phrases like, “I tried to get on their level” in order to communicate. We use this same phrase with children and it implies that a white person is superior – being encouraged to “dumb it down” – to reach a black person – like adults do with children.

I know, you white people don’t mean it that way. You never do. We (the biracial coalition) believe you. But when you’re preparing to talk to a black person, don’t feel like you must change your speech to communicate with us, but rather change your lens. 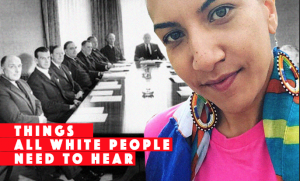 Let’s chat about where that lens comes from.

When you see the “***” it means to stop, check your white defense button and remember, the discussion could be applied to many groups of people. But right now we’re just talking to you – white people.

So here is the conversation white people need to hear:

Why so mad? That’s the running joke with black people. What in the world could you (wypipo) possibly be mad about? In fairness, plenty. Everyone has a reason to be mad at the system because, in 2017, we’re all targets. If you’re not in control of the powers that be, or, if you don’t fall into the category of a historically-included heterosexual affluent white man, you’re fucked. So yes, I’m entering into this conversation to admit that I understand there is plenty for white people to be mad at (enter another disclaimer to prepare for white guilt, fragility, and overall defensiveness that the following may trigger).

Along with growing up around middle-class white people, I also am a trained clinical social worker. This means I am skilled to point out people’s lack of awareness. It’s a gift, you’re welcome. But that’s the point. While in school, I traveled a very complicated journey inside my head to develop my awareness of self. And holy shit, I got my own kick in the ass regarding what I didn’t know when it came time for me to look at race.

So, when white people ask general questions when talking to black folks, I coach them through a self-inventory checklist to evaluate their “Black Folk Lens.”

Checking one’s inventory starts by identifying your “firsts” when it comes to experiencing “blackness” or Black Culture. Reflecting on what has shaped our view of blackness creates teachable moments for us to chew on, but it’s also a necessary step if we’re committed to bridging the missed communications. As much as I want to use my biracial clinical social worker superpowers to translate, it is impossible to talk to white people about black people until white people have awareness of their own biases.

As an example, the Editorial Director of this magazine and I were discussing different experiences and he said to me, “anecdotally, I don’t think most white people are inherently racist outside of the structures of racism that are handed down generationally.” Let’s take this as a baseline theory since I do respect this man and most white people who claim to be progressive seem to have adopted this way of thinking. (I too don’t mind it. Its [a] little too butterflies-and-rainbows for a person of color to identify with, but sure). However, with this theory, in order for a regular white person living in the Fan to chat it up with a regular black person living in Jackson Ward, that same white person will have to know what kinds of structures and institutions have influenced their specific lens as, you guessed it, a white person.*** 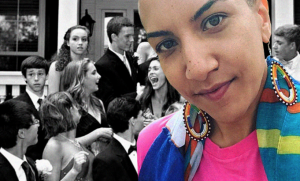 A white person should start with identifying which specific institutions they have been exposed to. From there, whether that rhetoric and experience has been positive or negative, they can then dissect their person-centered Black Folk Lens. Once this lens becomes clearer, then perhaps our conversations won’t trigger as many eye rolls for black people.

My hope for white people is to learn what messages are being sent in the eyes of your audience, especially when speaking with black folks. Your tone, your facial expression, your silence, and your entitlement*** are all communicating behavior to black folks that is historically traumatizing. If the “cool pose” is part of black culture; defined by the internets as a tough, fearless, and aloof attitude said to be adopted by black men as a coping mechanism to deal with racial oppression; then “dismissive mouth” is what I see white people project. This would translate as an elitist, cocky, indifferent attitude adopted by wypipo as a coping mechanism to ignore their contribution to racial oppression.

Black people in America and across the world are filled with resilience, and have learned to cope in ways that are labeled in 2017 as intimidating and criminal. As white people start to feel the ridiculousness of society and appear to be in a meltdown; I, as a black woman, want to say “Welcome to my lens.” Black folks continue to pick themselves up by their bootstraps while the system is also stepping on the shoestrings. Black folks have an experience unlike any other in America and deserve the effort of white people to check their lens, and create a chance for a better dialogue. Diversity of thought can be beautiful, but instead, it often ends up in a very long, heated argument on social media.

While I encourage the social media conversations, we have a chance to improve how we feel once we put down our phones, but we must first examine our perceptions of race. From there, we can walk away believing in humanity again. It’s a transformative thought, but not impossible. Together we can assess our own capacity for difference before we attempt to translate each other’s experience. We can build a space that’s safe, a place of listening, learning, and overall, just not being annoying.