After 16 years of raising money for the Children’s Hospital of Richmond through the hosting of Christmas-themed punk/metal tribute shows, Punks For Presents has broadened its horizons, presenting its first-ever comedy show at Cobra Cabana on Thursday, December 9. Hosts Benjamin Braman and Mike Engle gave us a preview of what the event has in store.

Grab your jacket, grab your docs, and make sure you stretch properly so you don’t hurt yourself from laughing your ass off in the cold. The holiday season of 2021 brings Richmond the 16th Annual Punks for Presents series of shows, where punk and metal cover/parody bands unite for a good cause in order to raise money and toy donations for the Children’s Hospital of Richmond. Every year always features great bands performing their best Christmas-themed tribute sets for one night only (shows in the past have featured such bands as Sleigher, Santa W.K., and Elvzig, among others). However, this year marks an expansion for the multi-night charity extravaganza – into comedy.

Thursday, December 9th will see the first-ever comedy show to appear in the Punks for Presents line up. Hosted by local Richmond comics Benjamin Braman and Mike Engle, Punks For Presents’ first stand-up show will feature seven of Richmond’s premier local comics, including Francesca Lyn, Kate Carroll, James Munoz, and more. Considering that punk music and comedy go together like gingerbread and latte, the only question is why has it taken this long to have a comedy show as part of the event.

Braman and Engle both originally brought the idea to Derek Anderson, one of the Punks For Presents organizers, who loved the idea of expanding the lineup, which previously only included music, to comedy.

“I reached out to Derek about the idea of doing a comedy show, and he was pretty receptive,” said Braman. “They themselves had been thinking about expanding and branching out, and it felt like a logical progression. We’re trying to bring comedy to people who otherwise, previously, may not have gone to a Richmond comedy show.”

Regardless of theme or format, all of Punks For Presents’ shows are held for the same reason: to raise donations, be they monetarily or brand new unwrapped toys, for the Children’s Hospital of Richmond. The shows, which have been held every year since 2005, have banded together to help the hospital with their unifying tagline: Party with a Purpose.

“Party can be generalized into music stuff, comedy stuff… if there was an art show, art stuff,” said Engle, who has been part of the Punks For Presents lineup in four previous years, as part of various bands. “I think it’s just about getting the entirety of the arts community involved. It’s to raise money for sick children, which I think everyone can get behind.”

The Punks For Presents comedy show will be held Thursday, December 9th at Cobra Cabana, which was a positive development for both Engle and Braman and the venue.

“It was brought to our attention that Cobra Cabana was looking to schedule more entertainment,” said Braman. “They were looking to bring in more shows into their patio area, so we reached out and they were really receptive to putting the show on.”

The show will be presented in two parts – the main comedy portion, hosted by Engle and Braman, followed by a second act featuring a very unique tribute band. Generally, Punks for Presents bands choose a particular artist and play songs from their discography, often with lyrics modified in comical fashion to focus on holiday themes. However, the musical guest for the comedy show at Cobra Cabana, Brown Frown and The Kisses, is doing something a little different for the kids.

“What if ‘Me First and the Gimme Gimmes’ were fronted by a coke-addled clown?” asked Engle, referencing the NOFX side-project that performs covers of 70s and 80s chestnuts in their signature pop-punk style.

Brown Frown and the Kisses’ unique spin on this idea will definitely be adult-themed. “This particular comedy show is for the kids, but it’s not for the kids, which is why it’s a little later in the night,” said Engle.

The Punks for Presents Stand-Up Showcase will be at Cobra Cabana on December 9th at 8:30p. Tickets are a suggested $5 donation at the door. Anyone entering the show must provide either a proof of vaccination or a 72 hour negative COVID test at the door to enter.

From jalapeno poppers to ice cream sundaes, Capitol Waffle Shop shows that the only limit to waffle flavor is your imagination.

Thanks to Capitol Waffle Shop, Richmonders can now satisfy their waffle cravings at almost any time of day — as long as it’s before 3 AM. The unique restaurant offers over 200 different batter recipes and thousands of different combinations. And best of all, they deliver.

Learning the ropes of restaurant business from his experiences in New York City, owner Brad Barzoloski wanted to bring a totally unique, original, and affordable food concept to Richmond.

He succeeded, bringing the area a fascinating new twist on a breakfast classic. With batter recipes incorporating pretty much any flavor you can think of, from falafel to mac and cheese to Fruity Pebbles, Capitol Waffle Shop’s menu is as diverse as its client base, which is often dictated by their location, accessibility, and community involvement.

Conveniently located in the heart of downtown, just off of Interstate 95, the restaurant sees businessmen, congressmen, and travelers alike. Open for around 20 hours each day, the late hours and full bar draws in Richmond’s nightlife crowd for a dish that’s normally more closely associated with breakfast.

“I’ve talked to several people who say they hear about our menu and have to stop in while they’re passing through,” Barzoloski said.

Heavily involved in community outreach, Capitol Waffle Shop works with several local groups to raise money for their respective causes. For example, they recently worked with a local elementary school to raise money for the Parent-Teacher Association, taking over a school cafeteria and selling waffles in order to raise money, all while holding a competition that placed one lucky student’s waffle creation on the menu.

Each month, the restaurant offers a menu that specifically caters to certain organizations in and around Richmond. For example, February’s menu features a cereal-themed waffle whose proceeds go to the Children’s Hospital of Richmond, as well as several other choices that benefit organizations such as the YWCA, the SPCA and the American Federation of Suicide Prevention.

Expressing the importance of being accessible to everyone, Barzoloski said it is crucial the food the restaurant serves is inexpensive and caters to all dietary-restricted customers; they even offer a vegan almond-protein-based batter for those who do not eat animal by-products.

The restaurant also prides itself on affordability. Presently, no item on The Capitol Waffle Shop menu exceeds $10. “Other restaurants around here are offering the same amount of food for $12 or $14,” Barzoloski said.

It’s not just the unusual waffle flavors that they have to offer, either. Capitol Waffle Shop also regularly presents enticing events and activities that bring people into the restaurant.

Every Friday, the restaurant runs a Facebook poll giving users the chance to choose between two new waffle options. The winner is placed on the menu for the week. Earlier this month, there was a tight race between a multi-colored rainbow waffle and an ice cream sundae waffle.

On Wednesdays, the restaurant hosts a local music showcase. People who are looking to perform can message The Capital Waffle Shop on Facebook for booking.

According to Barzoloski, after being active for a year and a half, the restaurant is looking to expand into other areas of Richmond. Presently, their downtown location limits their event calendar because it is a smaller setting.

However, Barzoloski said he hopes to open another location in the Fan district soon to better accommodate the restaurants growing clientele.

“Our main goal is making sure we are accessible to everyone,” Barzoloski said. “We want to always stay in front of the people and get our name out there.”

Now in its 12th year of charitable giving by means of Christmas cover bands, Punks For Presents is about to kick off its annual toy drive benefitting the Children’s Hospital of Richmond. Along with a Christmas in July benefit show that took place at Hardywood over the summer, this year’s drive spans 10 December days with five benefit shows with 22 Christmas-themed punk and metal bands performing at five separate venues around Richmond. Punks for Presents is also this month’s recipient of Sticky Rice’s Dine to Donate.

Richmond metal veterans of all shades and ages congregate together at this time of year to cover their idols’ top tracks in a yuletide way, using their music to fundraise for the betterment of ill children. Fan favorite Sleigher, who bring a holiday twist to classic Slayer tunes, throws the fruitcake right in your face, all for the kids.

While the purpose of the drive is to collect toys for kids, there’s no need to stress if you don’t have the eye for the most appealing ones. All proceeds from cover charges and raffle tickets, as well as any other donations, will go directly towards the purchase of new toys for the Children’s Hospital.

This gift won’t just last through the end of the holiday season, either. Punks for Presents has donated so many toys that there’s no way they can all be distributed on Christmas Day. “The Children’s Hospital saves a lot and gives them out over the year,” an anonymous organizer for Punks for Presents said. “So whenever a child comes out of surgery scared and confused, they’ll have a teddy bear waiting for them.”

If you are one those carol-singing, gift-giving savants, Punks for Presents invites you to shop locally at World of Mirth or other kid-friendly outlets for any $10 toy. Any local toy purchase is just as good as paying the admission charge, in the organizer’s eyes.

“You know, it was a late-night bar idea that actually ended up happening,” said an anonymous organizer on the beginnings of the annual toy drive. Who would have thought that some boozy insight is all it takes to create a 12-year legacy of parody, goodwill, and charity? 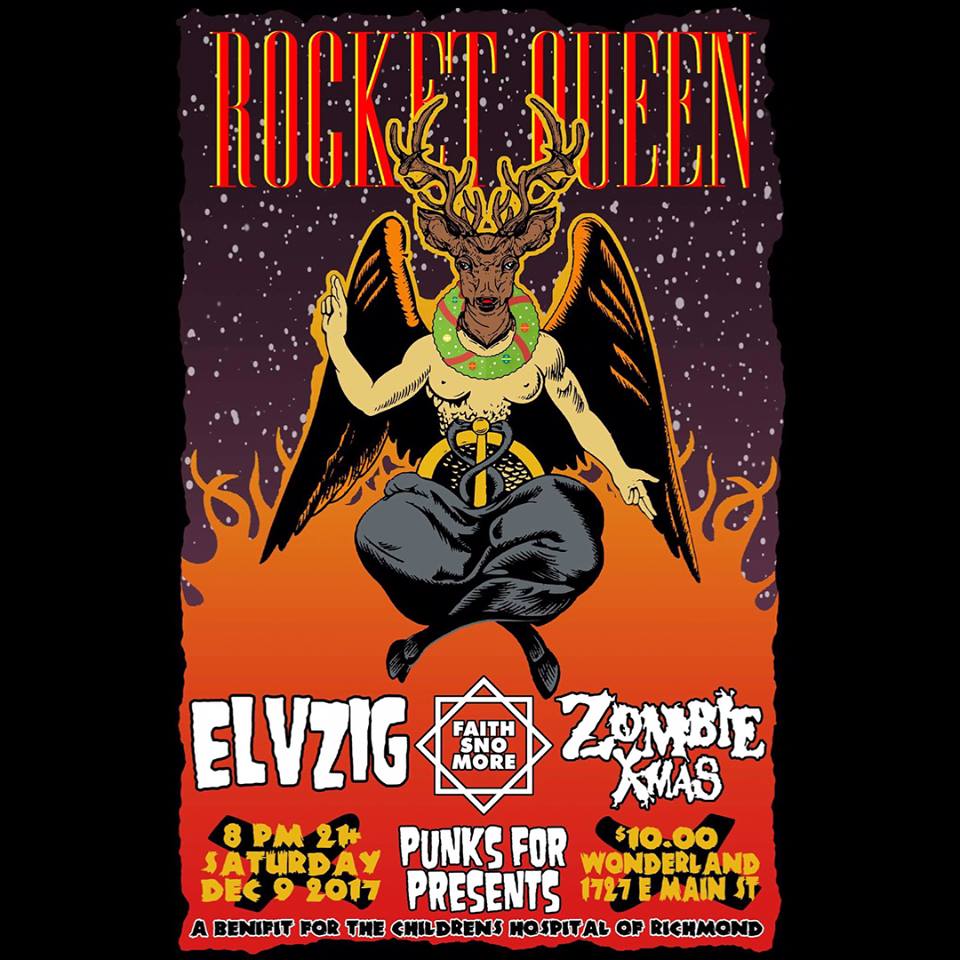 “Punks for Presents started off at Empire,” organizer Larry Wood said. “Now, everyone is so excited to be working with us. Banditos and Wonderland have been a blessing.” Banditos is where that late-night bar talk first happened and Banditos’ show is the last night of the event. It will be the only night free to attend, but don’t let that stop you from donating.

Punks for Presents’ organizers would also like to inform you that they have invited photographers to the shows, so keep a lookout on their website and social media for pictures of you and all your friends.

You can get all the details here, or check out the full rundown of bands, venues and shows below:

Metalheads dissatisfied with mainstream Christmas carols can get into the holiday spirit this weekend and next at the 11th annual Punks for Presents concert, a series of shows around town featuring holiday-themed cover bands to benefit the Children’s Hospital of Richmond.
END_OF_DOCUMENT_TOKEN_TO_BE_REPLACED

In an effort to raise money for the Children’s Hospital of Richmond at VCU, local business employees, tattoo artists and VCU students will gather toni
END_OF_DOCUMENT_TOKEN_TO_BE_REPLACED