In its fifth week dominating the box office, a panel of professors at Virginia Commonwealth University sat down for a forum on Marvel’s Black Panther at the VCU Arts Depot. Dozens of VCU students attended the event, titled Critical Perspectives on Black Panther, organized by Chioke I’Anson of the Department of African American Studies.

Ewing began by raising some criticisms of the film, which he enjoyed, but said he’s “become churlish since leaving the theater.” He raised three issues, centered on the depiction of the conflict between the titular hero of the film, Chadwick Boseman’s King T’Challa of the fictional African nation of Wakanda, and the villain, Erik Killmonger, played by Michael B. Jordan.

His first critique was the use of damage imagery, which he said Oakland and Killmonger were steeped in. Killmonger was “raised without a father, loses his moral compass…he’s a reflection of the damage done by white supremacy as is Oakland.” Second, he took issue with what he said was a poor framing of the Martin Luther King Jr. versus Malcolm X debate, in which “Martin usually wins, and if Malcolm wins, it’s because he’s made into Martin.”

His final critique, posed as a question, concerned Agent Ross, a character played by Martin Freeman. “What the hell is going on with that CIA dude, and what role is he playing in the film?” Ewing asked to widespread applause. 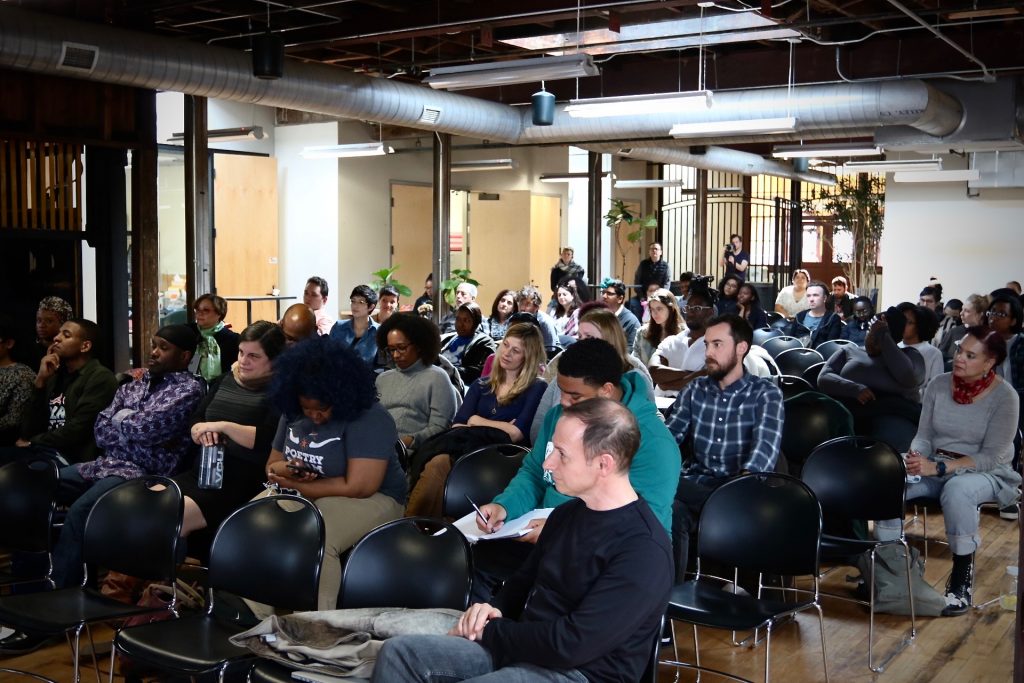 Summers spoke next, countering some of Ewing’s statements, but also agreeing in part. “I’m from Oakland, that was not Oakland,” she said, but found herself in parts of Killmonger’s story.

“I, like Erik Killmonger, had to believe in fairy tales in order to get out [of Oakland],” she said. “Growing up, blackness kept you in your place…You had to imagine a Wakanda.”

She took up the damage imagery theme Ewing referred to and said it was also used in subversive ways throughout the film. As the Black Panther, T’Challa is the defender of Wakanda, and he wears an energy-absorbing suit made out of Vibranium.

Vibranium is a fictitious ore that Wakandans have used to become the most technologically advanced civilization on Earth. Their advances let them cloak their nation, rendering it invisible and unpolluted by the rest of the world, even throughout the slave trade and later periods of European colonization and exploitation on the rest of the African continent.

Summers noted that the kinetic suit was “helping us to imagine ways to take this damage, done on our bodies, and to use it to do something else. I understand [what Ewing said about] the damage part, but I want to think about how we can redistribute violence and trauma.”

She disagreed with her colleague on Killmonger, who she said was a reminder that conflict exists within the black community, quoting the common saying, “Not all skinfolk can be kinfolk.”

She concluded by saying that she loved much of the movie, particularly the ways in which it showed a technologically-advanced African nation, and provided another way to think about a continent that she said could be hard to have a relationship with for African Americans. “Films like this allow us to imagine our relationship to Africa.”

Cottom took the final turn, staking out her turf as a fan of the whole Marvel cinematic universe. “This was the best origin story so far,” she said about Black Panther. “The only one that maybe even comes close–and Captain America is not my jam, I think he’s a fascist, you can fight me on that later–is Captain America The First Avenger.”

She praised the film for its aesthetics as well. “It matters that this is a beautiful movie because we don’t have a lot of movies where black people are beautiful.” She said that was thanks to director Ryan Coogler, the black director who also made Creed and Fruitvale Station.

“The way we are lit, the way we are styled, it’s clear that Ryan Coogler loves black people,” she said, contrasting him with another famous black director. “We can fight about this later too, but the way Tyler Perry focuses his cinematography, his eye, it tells you what he thinks about black people.”

She said the film was an outlier in that it was made for a black audience, noting that even with otherwise well-made media like NBC’s The Carmichael Show, “they had to have a biracial character to explain the show to white people. There has to be a white character that asks the questions, that clarifies the internal dialogue black people have, for a presumed white audience.”

One especially bright spot for her was Letitia Wright’s Shuri, the younger sister of T’Challa and a technological genius, and the visualization of a whole spectrum of black girls and black women, including the heroic spy-warrior Nakia, played by Lupita Nyong’o, the fierce General Okoye played by Danai Gurira, and the regal queen of Wakanda, played by Angela Bassett.

“You didn’t know who T’Challa would end up with,” she said about potential romance. “Generally, you watch one of these and you know where the black guy’s going to end up, unless it’s with the white blond woman, it’s going to be the only other black woman.”

She described it as postcolonial in as much as a Disney film could be. “Disney is as racist as you can imagine–it becomes Disney by producing racist caricatures,” she said, adding, “this says nothing at all about Disney and everything about where black people have become situated in the economy.” One of the prejudices she identified was the model minority myth, which the Wakandans portray when they are contrasted with African Americans.

She attributed some of the failings of the movie to the genre it sits in. “It still ends at the UN [United Nations], not in Wakanda. Superhero movies are about the state–that’s why you have Captain fricking America.”

Despite the variety of women in the film and their roles, she found another spot of disappointment related to the genre, saying, “but this is still a superhero movie and this is still the world we live in, so the women are mostly there to protect T’Challa…That says something about the limits of our imagination.”

But she argued that despite the ways it gave in to some stereotypes, it was a fundamentally subversive film, depicting Wakanda as “a kinfolk society, organized around kinship ties, which are argued to be “primitive” in sociology.” She added, “the idea that in Wakanda you can be a quote-unquote primitive culture, but also be economically and scientifically advanced refutes a colonialist white supremacist theory.”

Jonathan Becker, an associate professor of Educational Leadership at VCU, brought up the ending of the film, in which Wakanda announces itself to the rest of the world and Shuri opens a STEM center in the heart of Oakland. Cottom said that was a classic example of how the fear white people feel about ascendant black communities is often addressed.

“[At the end of the movie,] The only place for Wakanda to go was to come out and kick everybody’s asses, but it has to end with a nice safe school where they’re going to teach the community,” she said, going back to her disappointment that the film ended with Wakanda going to the UN.

One attendee, Andre Zachary, a VCU dance fellow, spoke to defend education. “We do need a training ground to nourish black art-making,” he said, saying that one difference between Perry and Coogler is that Coogler went to film school. He brought up Trinidad as an example of a place where black art flourishes, and talked about how many historically black spaces, citing dance halls and juke joints, where people learned to dance and music have disappeared in America due to gentrification. ”Those are educating grounds, not in the sense of western standards, but in the sense that blackness has its own space.”

Cottom agreed with him, but noted that there’s a “difference between education and schooling,” saying education can happen anywhere, you don’t need a school like Shuri’s. “One of the biggest myths is that if you don’t have a school wedded to an economic system, you aren’t educating anyone.”

“I absolutely believe that black spaces need to exist, and certainly unpoliced black spaces,” she said, but noted that in the context of the film, Shuri and T’Challa don’t ask the people of Oakland what they need, making their school a colonialist project.

Another potential counter-point came from a woman who said she’s unhappy hearing Killmonger described as Malcolm X to T’Challa’s King, saying, “Malcolm X had a lot of love in his heart. There’s no love in Killmonger.” She described both civil rights leaders as frequently misunderstood.

Ewing agreed with her and said “even Coogler” misunderstands Malcolm X. “There’s a notion that King was moving toward a more radical position and Malcolm to a gentler one, but that’s not true.” He said the central conflict between the two was a debate over integration. ”King is saying, we have this world that’s been created, we can’t do anything about that, but we need to work within this framework…it’s an integrationist vision.”

“Malcolm’s position is that you can not reform this system,” he continued, describing King as trying to save the burning house, and Malcolm X as wanting to exit and build a new one. “The movie walks right up to this conclusion [that you can’t save the house], and then it’s forced to retreat, ending at the United Nation, ending with the CIA agent giving the thumbs up, ending at the STEM center in Oakland.”

The question of the CIA returned again near the end of the talk when an attendee said that Agent Ross was one part of a dialectic response to Killmonger. “Ross says you’re on our team so long as you limit yourselves to STEM and charter schools, keep guns out of the hands of Killmonger. He’s the containment that lets white people feel good by containing the revolutionary threat.”

“Which to be fair is the job of the CIA,” said Cottom, noting that the Killmonger/Malcolm X comparison falls flat when you consider his targets. “He would have been Malcolm if he took the fight to the CIA, instead he takes it to Wakanda. I can’t recall a single moment in the film when he locates the problem in white nationalism, instead, he points to black nationalism.”

Summer responded to say that “Killmonger wasn’t a person” like the other characters, he was “that brute in the white imagination,” she said, adding, “I hate that we have to compare him to an iconic figure [like Malcolm], he’s an idea, not a character. I hesitate to invest too much into who Killmonger was instead of what he represented.” 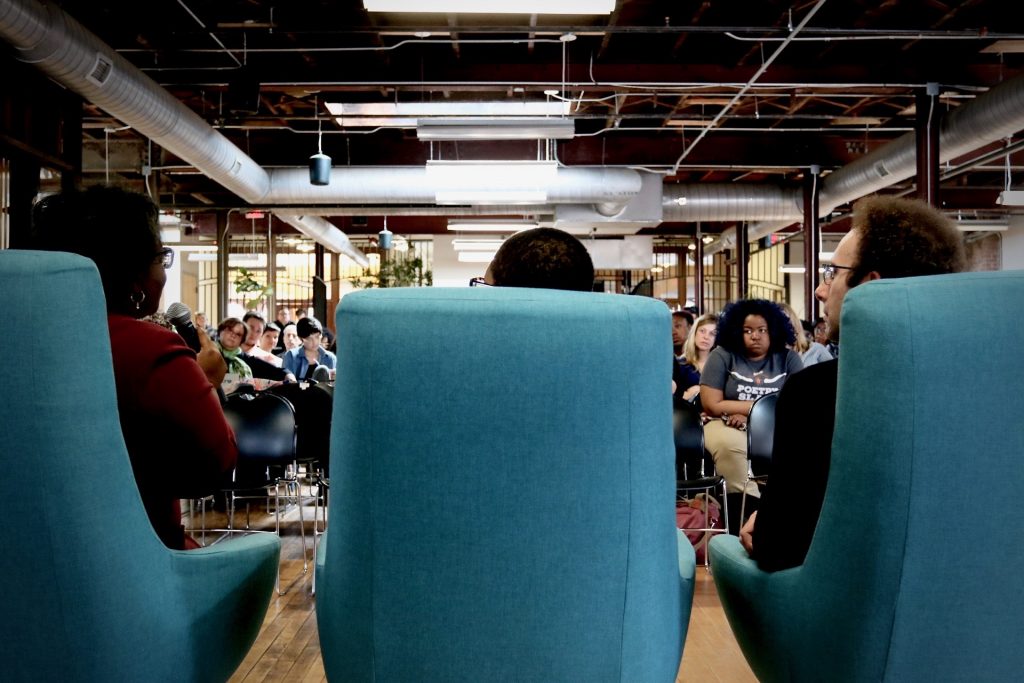 One of the final questions introduced the biggest disappointment possible for fans of the uniquely black film Coogler created in Black Panther, when an attendee asked if we’ll see his vision permeate throughout the rest of the Marvel movies.

No, according to the panel. Cottom explained, “Like all the other movies, it becomes subsumed when it drops into the Avengers because it’s rooted in nationalism. That’s why Captain America has to lead the Avengers. That’s how it’s going to be until we finally kill him and get to move on. We’ll get another Black Panther movie, but you should expect to see the other Marvel characters in it.”

All photos by Landon Shroder