For Charles and Ashley Grant of Grant Coffee Company, their recently-opened coffee shop offers not just an opportunity to bring great coffee to Chester but also to help people with developmental disabilities.

Grant Coffee Company owners Charles and Ashley Grant are brewing up mugs of coffee and opportunities for Chester’s special needs community. A crowd eager to support both product and mission poured in for the shop’s grand opening last month.

With a combined professional background including military service, law enforcement, and programing for those with intellectual or developmental disabilities (I/DD), the Grants wanted to pool their work experience and pursue a new venture. In surveying the needs of their community, they recognized a deficiency in opportunities for those with special needs.

People within the special needs community — like their own daughter, who has autism — often struggle to find workspaces that utilize all of their capabilities. The Grants hope to curb that trend by teaching job skills in their shop and by providing a safe environment for all to come and enjoy the coffee.

“We hope that the coffee shop becomes an inclusive space for the community,” said Ashley. “We want the space to be a naturally supportive environment for those who may struggle to adapt to traditional settings that most of us buzz through daily, and a place for them and their families to know that they are welcome without judgement.”

Ashley, an I/DD program development manager for Good Neighbor, knows what it takes to provide a supported environment that helps overcome stressful barriers in a social or workplace setting. She has thoughtfully guided design decisions to ensure a space that is not overstimulating, but is comfortable and inviting. Wooden toys and sensory items will be placed around the shop to engage and calm visitors.

During normal operating hours, the coffee shop will be open for everyone to come and enjoy a cup of Joe. When closed, the coffee shop will become a training center for individuals to come and partner with employment support providers and learn new skills, like making coffee, greeting customers, or bussing tables. Eventually, the Grants hope to host live sessions where the community is welcome to come and interact with students practicing job skills.

“We hope we can use this setting for our daughter to be able to teach others how to meet her in her world, and see her strengths and talents on her terms,” said Ashley.

The Grants say that their daughter is a primary motivation in cultivating this space. They know from experience what it’s like to love and interact with someone who takes in the world differently.

“In both my personal and professional life, it is astounding the number of times I hear, ‘I’m sorry, that must be so difficult for you,’” said Ashley. “No, it’s difficult for her to teach us to know her in a language no one speaks, and in ways very few can understand.”

Charles and Ashley hope that the space will be a teaching ground not just for those with disabilities, but for others learning to engage the special needs community.

After sampling multiple coffee roasters, the Grants, both coffee lovers, settled on Legacy Roasting out of Hopewell. Their blend of choice produces a balanced coffee that has hints of chocolate, malt, and citrus.

In addition to the java, the Grants offer a breakfast and light lunch menu. They’ve partnered with local bakers for fresh pastries and breads. They also plan to spotlight local artisans and offer products like unique coffee sleeves, handmade wooden trays, and Goochland honey.

A 24-hour vending machine makes Blanchard’s coffee accessible anytime, day or night — so if you’re craving your caffeine fix, they’ve got you covered.

A coffee vending machine has taken up residence outside Blanchard’s Coffee Roasting Co.‘s main production facility. Stocking whole beans, coffee grounds, and a variety of coffee-related supplies, this machine has turned Blanchard’s into a 24-hour operation.

Blanchard’s, founded by David Blanchard, is a specialty coffee roaster that has been roasting in Richmond for roughly 14 years.

“We focus on great coffee, but outside of that, we try to make sure that we’re working towards sustainable sourcing for all of our coffees,” says Stephen T. Robertson, Blanchard’s Director of Sales & Marketing.

Since 2005, Blanchard’s has been mainly focusing on wholesale sales of their coffee beans. However, in the past couple of years, they’ve tried their hand at retail, a decision that has led them to a lot more direct dealings with the people who actually drink their coffee.

Unfortunately, while they like selling their coffee directly to customers, Blanchard’s is not able to maintain a full-time retail location. They’ve found that a lot of potential customers are working during their roastery’s normal operating hours of 8am to 4pm, Monday through Friday. Despite not being able to stay open later, they wanted to reach the customers who could only get to them at night and on weekends. The vending machine was a solution that struck Blanchard’s as both perfect and cool.

“It’s a throwback to old school sales,” said Robertson. “We thought that a vending machine was a cool way to throw the best thing we had out towards our customers, and let them encounter those coffees in their own time and their own way.”

Of course, having a device that is unsupervised and available 24/7 to the public can raise issues of security protection. But Blanchard’s has taken some measures to improve security for the machine. One is that it contains no cash — customers will only be able to pay for their coffee beans with cards, Apple pay, and Google pay. And if nothing else, they trust their customers.

“We recognize that we’re putting something out into the public and that means anything goes at that point,” Robertson said. “Our hope is that people treat it as they would treat any other business that is putting itself out there.”

Prior research indicated to Blanchard’s that there was a big demand for a machine like this one. Since its release, sales numbers have very much borne that out.

“In the three weekends that we’ve had the machine running, we have nearly sold out every weekend,” Robertson said. “I hope over the course of a six-month evaluation that we can decide whether it’s something that we want to add multiple locations for in the future.”

The 24 hour vending machine has a wide variety of options to choose from. Consistent offerings include regular top sellers, as well as personal favorites of the staff, and some guest favorites. Their newest coffee blends will be available as well.

“There will be a top shelf offering, which is our newest and most favorite single-origin offering,” Robertson said. “We’ve also put some gear in there. For instance, we’ve got some B-64 filters that have been super-popular in the last few weeks.”

Blanchard’s purposefully put supplies into the machine for those customers who may be brewing at home and need filters that aren’t readily available at the grocery store. This sort of outreach is how Blanchard’s wants to show that they have their customer’s needs in mind.

“We want to make sure people feel comfortable engaging with the brand at the vending machines,” Robertson said. “We’ve set up a unique Instagram account just for the machine and we encourage people to post pictures and tell their stories while they get coffee from the machine.”

As far as the staff at Blanchard’s knows, they are the first coffee roaster to create a vending machine specifically for their coffee. They had their first vending machine-exclusive sale over Labor Day weekend, and hope to do more promotions drawing attention to the machine in the future.

“We encourage people to engage with us and have some fun with it,” said Robertson. “We want people telling their stories and having some fun with it. Make it something special.”

You can visit Blanchard’s 24-hour coffee vending machine in front of their roastery at 1903 Westwood Ave, or on Instagram @Blanchards247.

Join us for our March PAIRED dinner featuring cold-brew coffee cocktails. Each of your four courses will be paired with one of these cocktails, for a unique take on a traditional wine dinner.

Dinner will start promptly at 6:30pm, but please join us at 6pm to meet your fellow coffee lovers. 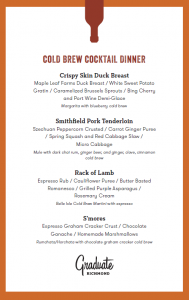 You can also check out the Facebook event page here!

Nitro coffee is the newest brew on the market and one local company is hoping to bring it to RVA, but they need your help.

END_OF_DOCUMENT_TOKEN_TO_BE_REPLACED

Macchiato, Cappuccino, Cold Brew, Pour Over… do you really know what these are? Many of us go into our local cafés daily (or every once in a while) for a cup of coffee or a latte.