This past Saturday thousands descended upon West Broad Street between Henry and Adams streets to savor delicious bites at the annual Broad Appetit Festival, which was celebrating its 10th year. 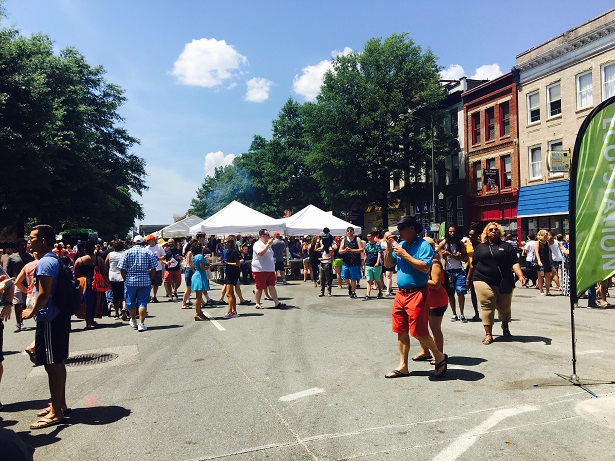 Over 60 of Richmond chefs pitched tents side by side and served up some of their finest small dishes $3, with some bigger options or $5. The chefs submit the dishes to be judged be a panel of experts to see who has the “To Dine For” dish of Richmond. The festival, which was held on Sunday, benefits the hunger relief organization FeedMore each year.

Richmond chefs had the chance to compete for five different awards including the “To Dine for” (best signature dish), “To Diet For” (best dessert dish), “The Healthy Dish”, The Ambiance Award (best decorated booth), and The People’s Choice, which attendees could vote on during the festival. Winners were not announced at press time.

Anyway, let’s get down to what you want to hear about and see, the food.

As my group waded our way through the droves of hungry/overstuffed festivalgoers pouring sweat, it was hard to know where to start with two lines of food all around.

Eventually, after some confusion and discussion around the giant Duke’s mayo truck, we jumped right in and worked our way down trying as much as we could before our stomachs exploded.

Here is my little rundown of the dishes RVA Mag had the chance to try: 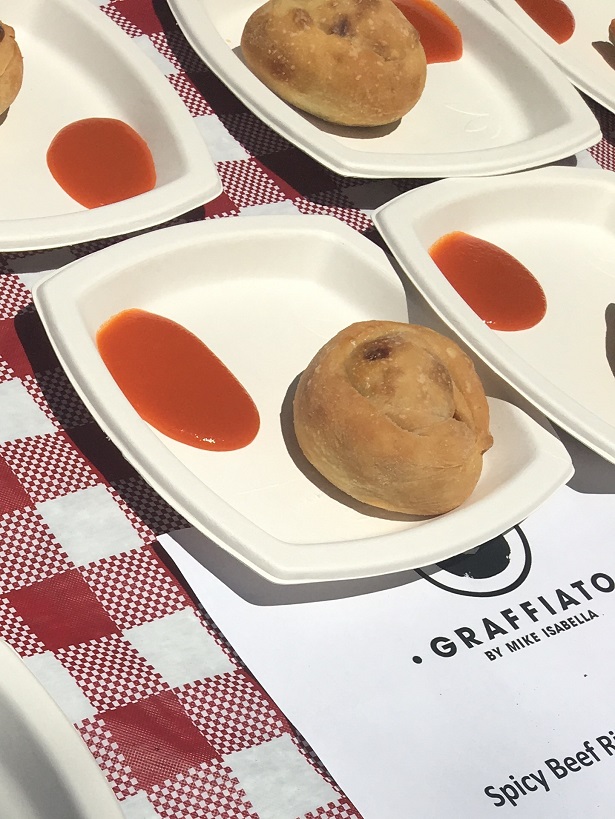 This was tasty and small enough to get you started for the day and not make you want to take a nap like a normal-sized calzone does. The bread was warm and the cheese was delicious. There was a spicy dippy sauce that paired perfectly with the dish. 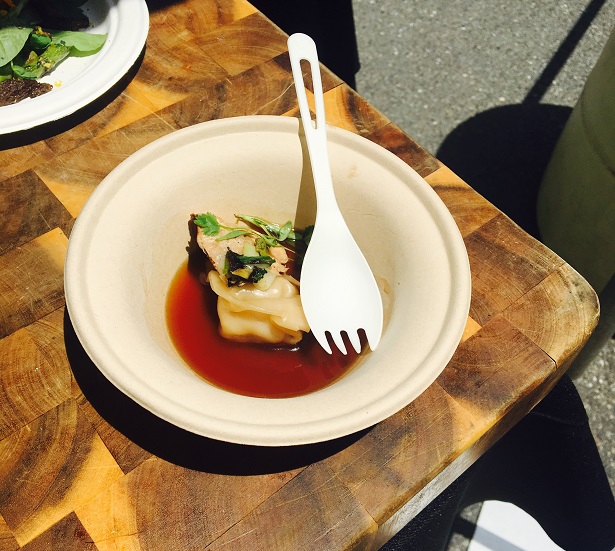 This was our second dish we enjoyed. The dumpling was very tasty and mushrooms are my favorite, you could put them on anything and I’m a happy girl. The Dashi broth stole the show for this dish though. It was rich, packed with flavor, very savory and the charred scallions added the perfect touch with slurping it up after I’d eaten my dumpling.

Maple & Pine also had a lighter dish with asparagus, morel mushrooms, cured egg yolk and preserved lemon with was super light and tasty. 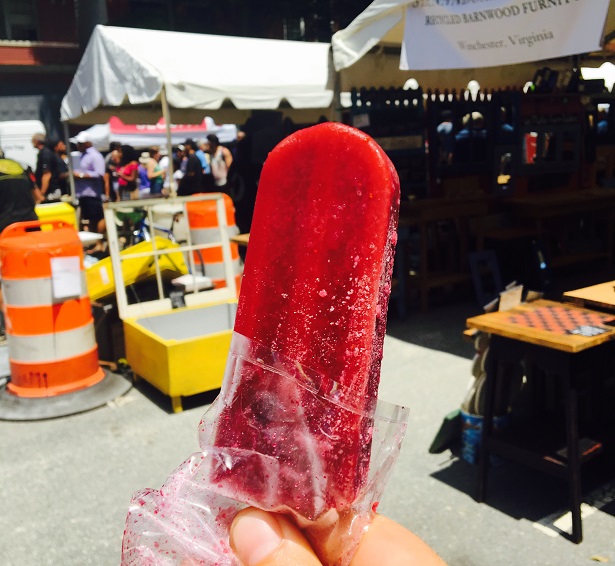 Now for some, this may not seem like one of the fancier stops, but on a hot day, nothing beats a cold, juicy King of Pops popsicle. Especially with their fruity, interesting flavor combos. My fiancé bought a blueberry lemonade pop and it was just the right treat to cleanse and cool our palate to get us going for the next stop! 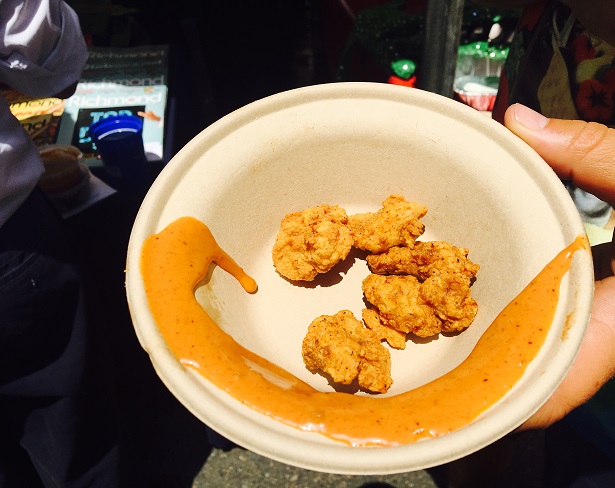 Now as my memory recalls, these weren’t at any particular Richmond restaurant, but the flavor was unforgettable. I was hesitant to get gator bites, but my fiancé talked me into it and I’m glad I did, because they were spicy, crispy and fried perfectly. Not soggy or overly greasy at all. Cajun spices paired with a spicy remoulade was a great snack and I could have stood to get another round, but we had places to go and dishes to eat. 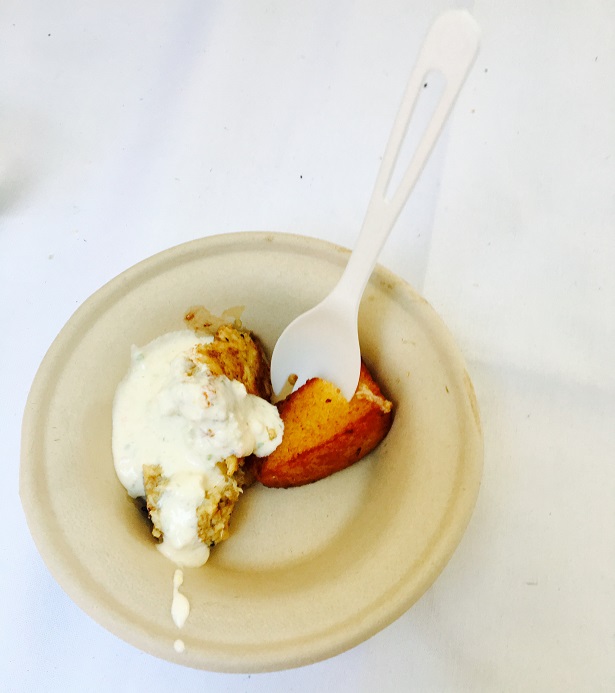 So this came pretty close to my favorite (which I’m saving for the end) this was a tough call because of my love for bread pudding. Spoonbread Bistro is a restaurant on Floyd Avenue owned by Chef Michael Hall (formerly of M Wine Bistro) that I have been dying to try out. The food always looks amazing and its Southern style, so right up my alley. There was a whole bunch of Southern love packed into these tiny dishes. The crab cakes were delicious, stayed together and you could taste all of the spices blending nicely. The white remoulade wasn’t too heavy and helped to enhance the flavors of the crab cake and had just the right amount of tang and the white truffle spoonbread pulled it all together. I would have liked it to be a little spicier, but that’s just me. 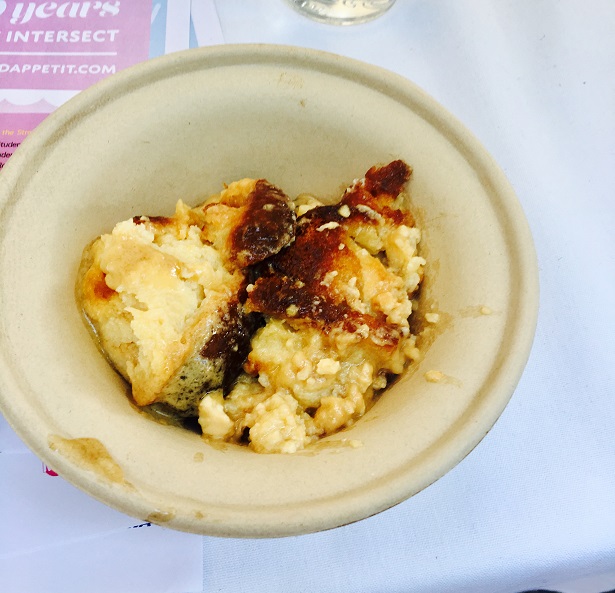 Now, on to the bourbon bread pudding. I could not put it down. Despite the heat, despite my stomach punching me to stop eating and my fiancé looking at me like he was second guessing our upcoming wedding, I made my way through the soft and rich pudding. It was so rich and sweet and you got the just the hint of bourbon so it wasn’t overpowering. Not dry or overly soggy like many bread puddings. It was delightful. The crisp outer layer made it that much more delectable once you took a spoonful of this bread pudding.

I neglected to get a picture of this, but Spoonbread also had a giant fruit-infused drink that I believe was watermelon or strawberry with water and it was the perfect beverage right in the middle of the day to cool us down. And get me re-energized after my lovefest with the bourbon bread pudding, because we still had a few dishes to go. 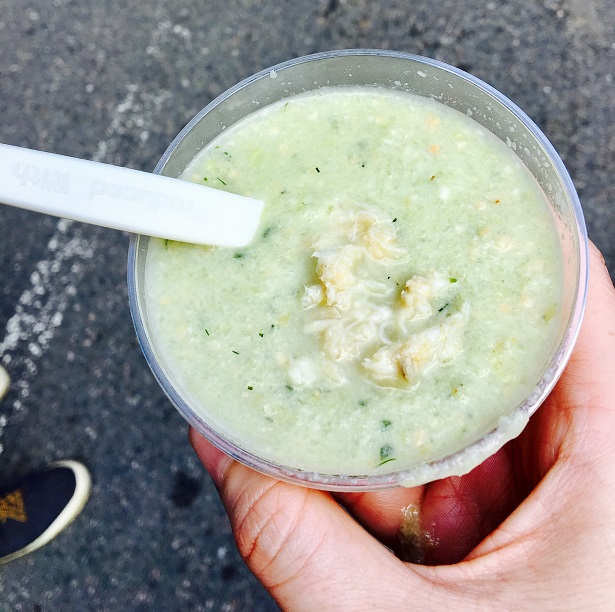 So, I will admit, Rappahannock is one of my top favorite restaurants in the city and I was hoping for some oysters, but I’m guessing they wanted to keep it simple. Their dish was refreshing since it was chilled and the cucumber and dill made for a great combo with the thicker soup/gazpacho. It had a nice bite to it. The crab however, did not mix well with the flavors and this dish just was not for me. It pains me to write this, because I love them, but I think it could have used a little something else. The texture was just not sitting right with me. 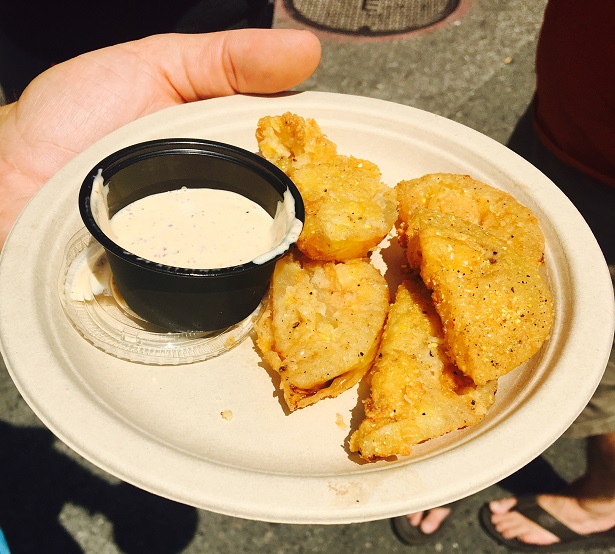 Comfort restaurant had pitched a tent right outside their restaurant and they were serving up two staples that describe their style and name perfectly; fried green tomatoes and pimento cheese. It’s two of my favorite southern dishes especially pimento cheese. I’m picky about it too, because it can be mushy and concealed-like in some places, but Comfort does it right. A big heaping mound of cheese with plenty of pimentos throughout with Ritz crackers to go alongside for dipping creating the perfect balance of savory and salty.

The fried green tomatoes were juicy with a tasty breading. At this point I was getting stuffed, but I power through because its one of my favorite snacks when I go to Comfort. The dipping sauce was creamy and thick, but went great with the fried tomatoes. Their usual sauce I believe.

Now I’ve saved my favorite two dishes from Broad Appetit for last…if you missed out than you will definitely want to catch them next year: 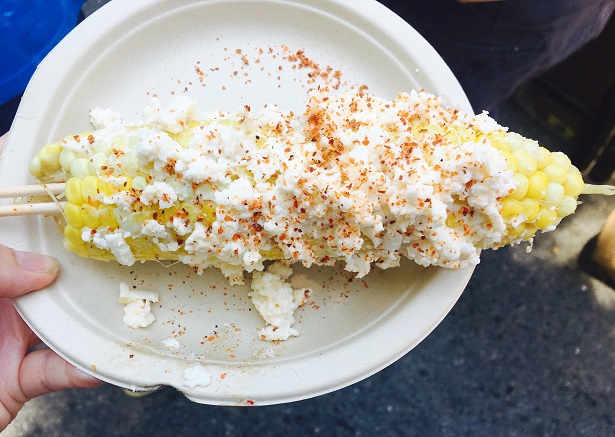 Wow. Just wow. This was only our second stop and it blew me away. The lines were so long and I talked to our group about possibly making a lap and coming back, but my fiancé saw the street corn and said no we are going to want to stay. I’m so glad I did because our group got the very last two and it was the best dish I ate at the festival. I really could go on and on and write a poem, a song, an ode to the heavenliness that is Mexican street corn, but I will just break it down for those of you who haven’t had the delectable dish. It’s grilled corn on the cob slathered with mayo, chili powder, cotija cheese and salt. It is everything you want and more. Mayo may sound a little weird to some people on corn on the cob, but for those who have had it, know it’s the perfect pairing. Its creamy and paired with the salt to kick up the cojita cheese, and the chili powder giving it the kick all all over I could not put it down. 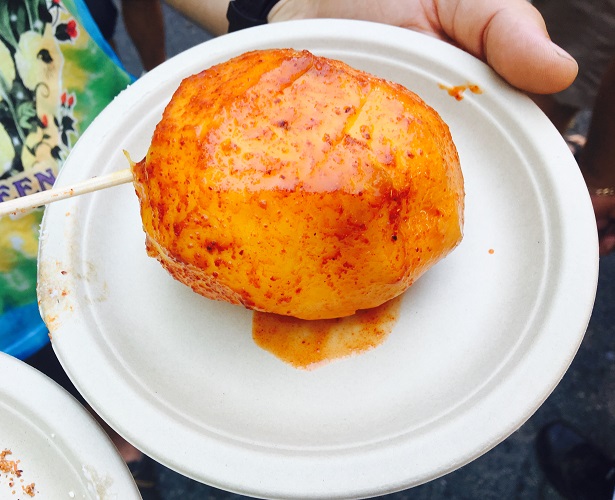 Now on to the mango. Very simple dish, yet oh so delicious. Almost like a dessert after the creamy, spicy elote. It was a big ripe juicy mango on a stick doused with lime juice, salt and chili powder. Simple as that. But oh, so much flavor. It was a tasty treat that we couldn’t put down and the flavor combination of the sweet mango with the chile spice and tart lime were a delight. Of course, after these two dishes, are teeth were camera ready. Don’t worry, I’ll spare you those photos. Check them out in Shockoe Bottom at 1703 E. Franklin St.

I’m only bummed that I didn’t get to try everything, but in short, if you haven’t been to Broad Appetit, please venture down there despite the traffic, parking and droves of people, because the chefs work so hard and the food is truly amazing and so diverse.