With Memorial Day Weekend in the books, summer in Richmond is officially here!

To celebrate the liveliest season in the River City, RVA Magazine is proud to release the RVA Summer Field Guide: Our take on a solid season to get outdoors and enjoy the city’s best, out and on the streets today.

Beat the heat and humidity, and grab a first-edition copy of your new summer go-to guide. With a classic outdoor field guide feel, the RVA Summer Field Guide brings all the sunny-day feels and boozy ideas to make the most of your days.

The guide is packed with upcoming music events, summer festivals, guides to Richmond nightlife, summer beers to look for, the best watering holes in the state, plenty of planned trips for students and families alike, and many more. Oh, yeah — and we also have quite possibly the best scavenger hunt in existence.

While it’s impossible to include everything and everywhere that make summer fun so great in this state, what comes with the RVA Summer Field Guide is a quinnessential start to exploring the city we all call home. Pick up a free copy today at any of our amazing vendors and local hot spots in town, and be sure to grab one before they run out — we guarantee you’ll be glad you did!

You can check out a PDF of the guide online below. Check our Instagram and Twitter for a special release at Hardywood tonight, or check any of the spots listed below to get a copy of your own.

Grab yours before they run out! The RVA Summer Field Guide can be found now at these locations:

Check this weekend for more issues at these locations:

*Along with other local hot spots, markets and restaurants.

This week, we’ve got several fresh beers coming to the local taps, and the part you’ve all been waiting for: St. Paddy’s Day events! A few more events are popping up this time around as well, and there should be plenty of green beer around town for the occasion.

In extra-exciting news to us here at the magazine, our longtime friends, Legend Brewing Co., are celebrating a quarter of a century and 25 trips around the sun this year. To add to the occasion, they made the cover of VA Growler this issue, and we couldn’t be more thrilled for their anniversary party coming up next month. Be sure to head over to Manchester for Legend’s birthday on April 13, and don’t forget the kids and the pups.

Coming up tomorrow (aka Pi Day, and my mom’s birthday — who consequently isn’t really into pie?) is the return of Defenestrator to Ardent Craft Ales. The annual brew has made its way back to the taps, made in collaboration with The Cask Cafe in The Fan. This ruby-brown lager doppelbock is a fan favorite: clean, full-bodied and full of a malty aroma with lesser fruity notes. Its flavor is on the nutty side (ditto), and its bready sweetness finishes off with a crisp feel for an easy drink. It’s 8.7%, so it’s a great way to dive straight into Thirsty Thursday.

The next day, head over to Hardywood for Fresh Can Friday’s Dreamlike can release. This perfectly-spring brew is a pillowy-soft DIPA that’s “bursting with tropical flavors” to get you warmed up for the warm weather we’ve been so luckily experiencing all week. Nice temperatures are set to continue into the weekend, so if you’re as excited as we are for the sunny days, Dreamlike is the perfect tip-of-the-hat to the season.

If you’re not-so-ready for the heat to return, grab a pint of Hardywood’s Apple Brandy Wee Heavy at its release on Saturday for a burst of the best fall flavors.

For those of you looking for more of a triple-whammy, The Veil Brewing Co. just released three beers yesterday: Step Dad³, ?, and American Luxury, in addition to the return of Crucial Taunt. I’m glad to see Crucial Taunt make its way back, because not only is this DIPA packed with awesome flavors with an extremely hoppy, juicy taste, it’s named after the band from Wayne’s World (one of the best movies to come out of the early 90s, obviously). Wayne’s girlfriend, Cassandra, plays in the punk band and is featured performing in the film. Grab a taste while you can, and check out their fresh releases like “?” — answer that for yourself when you give it a try.

In more new-brew-news and big releases, Final Gravity Brewing Co. is dropping a double-beer special on Friday. Ancient Mariner Gose and Low Earth Orbit DIPA are fresh to the taps this weekend, with Ancient Mariner coming back for more after its original release. The long-awaited return will catch you “by the spell of this refreshingly-fruity brew, with the perfect balance of tart and a tinge of saltiness,” and flavored with fruits like raspberry, blackberry, passionfruit, and mango at 4.5%. Low Earth Orbit DIPA, on the other hand, is made to enjoy after a heavy week, according to Final Gravity — the 8% Double IPA is flavored with passionfruit, grapefruit, and lime to “elevate your spirit and lighten your mental load”….. And isn’t that perfect for the end of the week?

⟁ Over the weekend, Triple Crossing Beer had an especially-large release in Fulton. Starting with Arriving Somewhere But Not Here, this oak-fermented sour beer came out after several months of conditioning to make its perfectly-tropical tastes (like white grape, earthy citrus, and a tart, dry finish). Glass House DIPA is the newest in its variety from Triple Crossing, and it’ll leave you feeling just peachy with its ripe orchard tones in addition to mango, melon, and bright orange citrus. Interstellar Burst DIPA, on the other hand, is hopped with Galaxy, Citra, and El Dorado to give off “deep and plush impressions” with its passionfruit, pineapple, grapefruit, and mango tastes. Finally, Mosaic Triangles ⟁ IPA is named after what they call “the strongest shape in nature.” Triple Crossing notes that they named it for their  favorite shape and their favorite hops, and the bright, soft-tropical orange and melon citrus will bring out those perfectly-crafted and balanced Triple Crossing flavors — because it wouldn’t be from Triple Crossing if it didn’t get that extra-special attention to detail. We love this brewery not only for their passion in brewing, but because every one of their beers is so damn good. Keep doing you, TC! ⟁

Alright, time to jump into the part you’ve probably been waiting for — St. Paddy’s Day, and what to do for ir. Don’t worry, craft beer enthusiasts and drunks alike, Richmond has something for everyone (as it always does). First up is the Ploughman’s Porter Release coming out from Three Notch’d RVA Collab House tomorrow afternoon for Tap That Thursday. This English Porter is “an ode to the old world, when St. Patrick’s Day celebrations were in their infancy.” This brew is based on an 18th-century recipe, to be lighter, less roasty and have more caramel flavors, they say “this is one ‘light’ dark beer.”

To keep the festivities going, celebrate all week long with Strangeways Brewing Company. They’ll have a special Lücky Charms beer ready in crowlers, growlers and grunts as well as shows and Intergalactic Taco celebrations throughout the week. Head over for live bagpipes and brunch with Spud Bucket for St. Patrick’s Sunday, where you can either keep the party going or recover from the weekend with the hair of the dog — in true Irish fashion.

For Saturday fun, check out the 6th Annual St. Patty’O Crawl with Southern Railway Taphouse and Shiplock Brewing. Make your way down to Shockoe for probably the most “lively” part of the city for this holiday every year, with tons of live music and beers galore. A note from the breweries: “We know it’s PADDY but it’s on our PATIO,” so hold the “well, actually,” bros — we see you.

This might be one of the best deals in the city…… $1 Green Craft Beers are starting at noon at Shiplock, so get there early if you want to grab a seat and get blitzed for the day, as many Shockoe residents do. There will be tons of awesome music to keep the party going into the night, with Zack Artist in the morning, Austin Ferguson Band in the afternoon, and East of Blueridge taking over for the evening special. The outside boundaries will be extra-big, too, so fear not that you’ll run out of room for shenanigans: They’ve got you covered.

If you’re really not in the mood for all the craziness of St. Paddy’s around town, Stone Brewing Company thought ahead. Take the day off from the crowds and the city and get out into nature to help the environment. Stone’s throwing a Capital Trail Clean-Up day for volunteer groups to avoid the mess and clean one up instead.

Volunteers get discounts at the after-party, a celebration dedicated to everyone who came out to help (and there’s BBQ!!) so it’s a wonderful way to still enjoy your weekend — and do something awesome — if you’re dreading the festivals.

The Circuit Arcade Bar partnered up with our friends at Triple Crossing this week to create SmashDown, a giant competition in Ultimate Smash Bros to slam your competition and bring back the best days of the early 2000s (and for many of us, our childhoods) in a mario-slam-galore. Head over tomorrow night to get your shot at crushing in this seriously-beloved game, and get famous on Twitch in the process (it’s livestreamed)!

The MFA Thesis Exhibition is a signature event in the VCUarts annual student exhibition calendar. The 2019 MFA Thesis Exhibition will showcase ambitious and challenging works by some of the most talented emerging artists and professionals in the country. Participating departments include: Craft/Material Studies; Graphic Design; Kinetic Imaging; Painting + Printmaking; Photography and Film; and Sculpture + Extended Media.

The MFA Thesis Exhibition is a signature event in the VCUarts annual student exhibition calendar. The 2019 MFA Thesis Exhibition will showcase ambitious and challenging works by some of the most talented emerging artists and professionals in the country. Participating departments include: Craft/Material Studies; Graphic Design; Kinetic Imaging; Painting + Printmaking; Photography and Film; and Sculpture + Extended Media.

GRITTY CITY IS 4 THE KIDS

HOSTED BY BEEN OFFICIAL

*all proceeds benefit PUNKS FOR PRESENTS 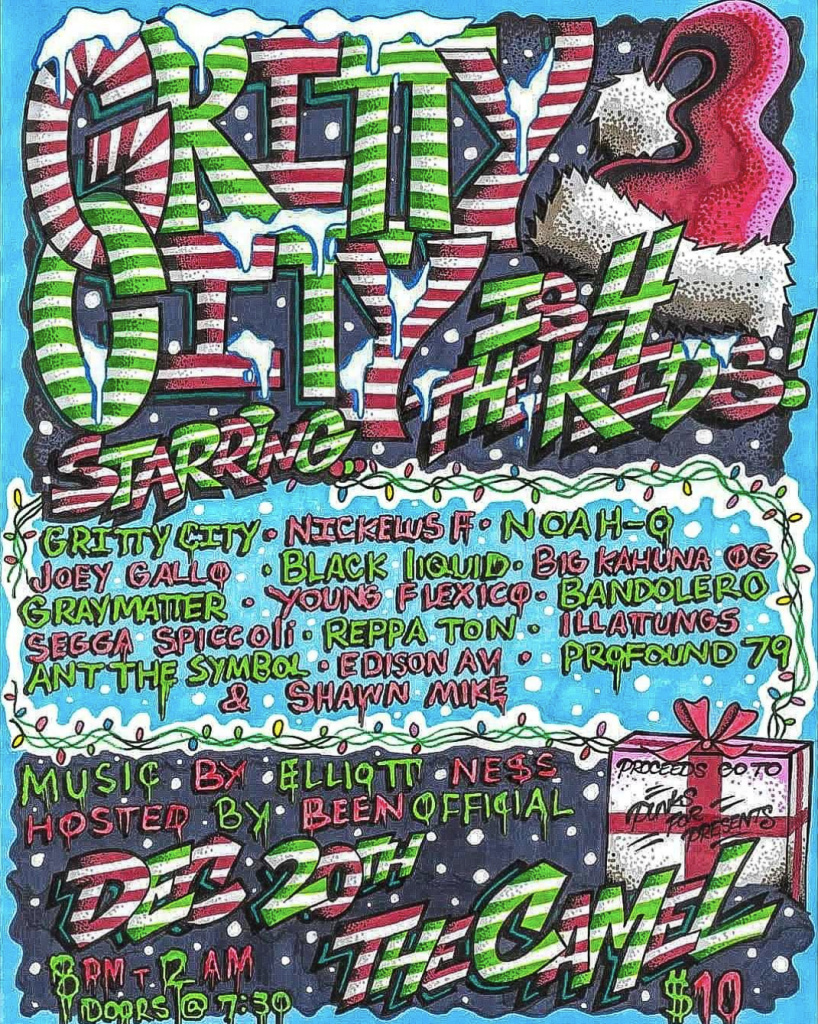 Welcome, RVA Mag readers, to the greatest time of the entire year: We’re about to get all kinds of spooky in this. I have worked hard to gather to you, my dear Halloween-excited ghouls, a laundry list of the top five best haunted houses (and one creepy-cool anniversary party) in Richmond and across Virginia.

If your stomach isn’t aching from all of the BooBerry and Count Chocula cereal you’ve eaten this week, while downing a pint of whatever pumpkin-spice-latte-IPA is on tap at your neighborhood haunt of choice, crawl on out to one of these spooky joints. I promise you, Hocus Pocus and Troll 2 will still be on rotation.

Throw on your spider onesie and take a break. You’ve earned it.