The Harry Potter author has been on the TERF train for a while now, but these days it’s feeling more and more like she’s driving it herself.

“I’ve written and spoken about my own mental health challenges, which include OCD, depression and anxiety. I did so recently in my essay ‘TERF Wars’. I’ve taken anti-depressants in the past and they helped me,” she said. “Many health professionals are concerned that young people struggling with their mental health are being shunted towards hormones and surgery when this may not be in their best interests. Many, myself included, believe we are watching a new kind of conversion therapy for young gay people, who are being set on a lifelong path of medicalisation that may result in the loss of their fertility and/or full sexual function.”

Rowling continued, “These concerns were explored by the recent BBC documentary about the Tavistock Clinic. Whistleblowers were talking about transitions driven by homophobia. As I’ve said many times, transition may be the answer for some. For others, it won’t – witness the accounts of detransitioners. ‘The system sees surgery as the easy fix to girls who do not conform.’”

The tweets went on with links to various articles articulating the author’s points. However, we should note that a research study in 2019 by Stonewall showed that de-transitioning is very rare and that of the 3,398 trans patients who spoke to the NHS Gender Identity Service between 2016 and 2017, less than one percent had expressed regrets about transition or had de-transitioned.

“Sophie is a trans woman and a true feminist ally,” Rowling tweeted next. “She was making the point that anti-depressants were over-prescribed to teenagers in the past, with serious consequences. The long-term health risks of cross-sex hormones have been now been tracked over a lengthy period. These side-effects are often minimised or denied by trans activists.”

Rowling added, “Carl Henegan, professor of evidence-based medicine at Oxford University, has described the off-label use of puberty blockers on under-18s as an ‘unregulated live experiment on children’. None of that may trouble you or disturb your belief in your own righteousness. But if so, I can’t pretend I care much about your bad opinion of me.”

There certainly are an array of opinions about the wizarding legend. In an article published July 6 for The Atlantic, writer Helen Lewis likened Rowling’s extremely public missteps as of late to a deeply gratifying lesson in the Potterverse.

“Those who feel rejected and disoriented by that should look for comfort in the character who is the true moral center of the Potterverse,” Lewis wrote. “It was never Harry, the boy who happened to live, whose luck always holds, whose mistakes are minor. It is Severus Snape, who was made miserable by Harry’s father and took it out on Harry, who loved Harry’s mother and betrayed her friends, who redeemed himself with a morally repugnant act. A bully, a victim, a villain, and a hero: a human.”

But is it enough to cite foul human idiosyncrasies as a means to forgive inadequacies by individuals who should probably know better and do better in the process of human evolution? That will be decided over time in the court of public opinion. For now, we have this right here to digest and dismantle (click below to expand and see all 11 tweets).

Rowling was back at it on Twitter Tuesday with the interaction below. Get ready for another news cycle, folks.

I'm a world expert on being talked over, lied about and defined by misogynists, on being instructed to centre everyone but my own demographic in my activism and on being denied credit for my own achievements by envious men. In other words, I'm a woman. https://t.co/CN8VZH3z0S

Every Friday night, RVA Mag drops one scorcher of a playlist curated by Virginia’s (or the UK’s) most influential artists, musicians, and institutions. This week UK actor, Samuel Roukin, from AMC’s “Turn: Washington Spies,” “Harry Potter”, “Agents of SHIELD,” and “Salem” brings you an EDM playlist that will burst your eardrums, shatter your lousy week, and hype you for all the nighttime journeys you are about to embark on this weekend.

A little magic is flying into Carytown Cupcakes, and it’s bursting through fireplaces, running through train platforms, and swooping in on a broomstick.

Starting this past Monday and continuing through November 5, Carytown Cupcakes is celebrating October and the wizarding world of Harry Potter by bringing back ‘Cary Potter,’ with another round of Harry Potter-themed cupcakes, decorations, and events including a Harry Potter trivia night and a baking class. 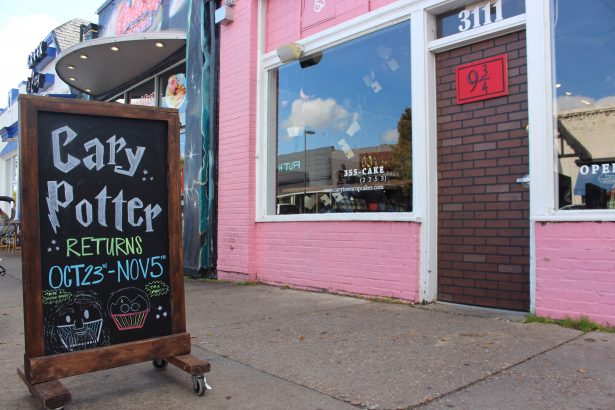 The shop–as well as the cupcakes–has been completely transformed. Customers now walk through Platform 9 ¾ into the wizarding world, complete with potions, a sorting hat, and flying letters from Hogwarts. A dementor lurks in the corner while the Whomping Willow stands tall in another, and housemade butterbeer is served on tap.

Treats like sour apple-flavored Basilisk venom cupcakes and butterbeer-flavored frosting have taken over, including some unique cupcakes such as Polyjuice Potion or Gillyweed. 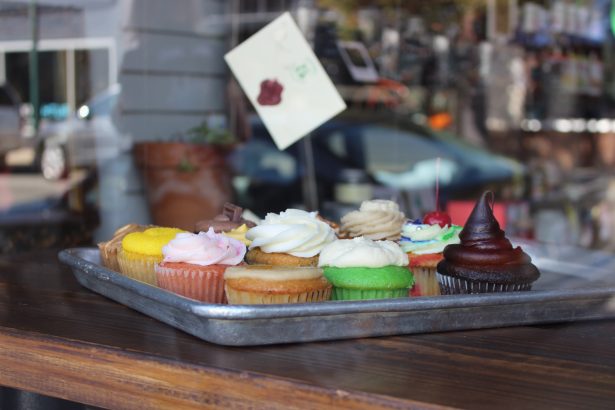 In addition to some fun events and game nights through the rest of October, Carytown Cupcakes has also asked some other Cary Street businesses to join in on the fun with a Horcrux Scavenger Hunt Crawl. Customers can search through other shops in Carytown to find Rowena Ravenclaw’s diadem or Tom Riddle’s diary. Anyone who successfully completes the hunt will receive a small prize and will be entered to win a Grand Prize (to be determined at a later date).

Below you can find a rundown of events for ‘Cary Potter’:

Everyday: Show off your best costumes for the Cary Potter Costume Contest! To enter, visit us wearing your finest house robes (or any other outfits/characters) and post a picture to Instagram with the hashtag #CaryPotterCostume17. We will choose one winner a week to win a free Dozen Cupcakes (Vegan and Gluten Free available).

The beloved story about the Boy Who Lived is coming to the Altria Theater in the near future. The soundtrack from the movie adaptation of Harry Potter and the Sorcerer’s Stone will be played by the Richmond Symphony Orchestra on February 10, as part of the Harry Potter Film Concert Series. The movie itself will play on a large screen behind the musicians for the audience to watch while the musicians play.

This concert series was started last year by Warner Bros. and CineConcerts, which has created other concert series based on other franchises, such as The Godfather and Star Trek. In 2018, the show will have been performed in over 35 countries.

“The Harry Potter film series is a once-in-a-lifetime cultural phenomenon that continues to delight millions of fans around the world,” said Justin Freer, CineConcerts president and producer and conductor of the Harry Potter Film Concert Series in a recent news release. “It is with great pleasure that we introduce for the first time ever an opportunity to experience the award-winning music scores played live by a symphony orchestra, all while the beloved film is simultaneously projected on to the big screen.”

The musical score to Harry Potter and the Sorcerer’s Stone, as well as the next two movies in the series, was composed by John Williams.  Details about the event can be found on Altria Theater’s website. Tickets range from $52.50-$82.50 go on sale at 10:00 AM on August 11 on the Altria Theater website, and can also be purchased at the Altria Theater Box Office, as well as by calling 800-514-ETIX(3849).

Harry Potter and the Sorcerer’s Stone has a run time of two hours and 39 minutes.

Oh man, I’m not a big Harry Potter guy but for some of you this is probably a huge deal.
END_OF_DOCUMENT_TOKEN_TO_BE_REPLACED