This year’s Krampusnacht walk through Carytown brought the evil folklore of Europe to the River City for the seventh year in a row.

Christmas, but make it creepy.

That’s the vibe channeled by RVA Krampusnacht when their parade of horned, demonic elves and Santas, and other sinister-looking Yuletide monsters takes over the streets of Carytown for one night every holiday season. After sundown on Saturday, December 7, the dark side of Christmas folklore was brought to life once again for the 7th Annual RVA Krampusnacht Carytown Walk.

Krampus is a horned, anthropomorphic creature said to be half-goat, half-demon, and is best known for his role working alongside Saint Nicholas in the Yuletide folklore of Alpine Europe. While Saint Nicholas rewarded the good children with gifts, Krampus accompanied him to beat the bratty ones with his wooden switches, or bag them up in a burlap sack and take them to the woods, never to be seen again. It’s a bit more intense than our modern lore of Santa Claus and his lumps of coal for the naughty list.

The tradition of the Krampuslauf (English: Krampus Run) still takes place in most Alpine towns on December 5, the Eve of Saint Nicholas Day. RVA Krampusnacht co-founders Parker Galore and Nicole Pisaniello were captivated by the tradition and decided to bring it to Richmond in 2013, and Galore said the turnout grows each year.

Attendees Tara and Shaun traveled all the way from Charlottesville for the RVA Krampus Walk, and have done so for the past few years. “We get so caught up in the commercial part of Christmas — this is way more fun. And we need to give a nod to the bad kids too, right?” said Tara.

Major cities across the U.S. have also adopted Krampus traditions, such as Portland, Philadelphia, Dallas, and Los Angeles.

“It’s spreading,” said Galore. “Krampus is an icon we’re going to start seeing reincorporated into our Yuletide celebrations.” With a Krampus movie that came to theaters in 2015, Krampus does seem to be making its way, slowly but surely, into mainstream American holiday culture.

But plenty are still unaware of the Krampus legend, especially judging by the countless stares, jaw drops, and confused laughter of people that happened to be in Carytown on the night of the Krampus Walk and had no knowledge of the event. But for the Krampus walkers, the bewilderment of unintentional spectators is one of the best parts.

“It’s fun to see all of the shock and confusion from people who don’t know what it is,” said Adrienne, a participant who walked in last year’s RVA Krampus Walk as well. “They’ll be driving by or sitting in windows of restaurants and just stare at us like, ‘What the hell is going on?’”

Galore noted that many people who currently follow the RVA Krampusnacht movement were once those confused, bewildered people dining in Carytown or passing through. Saint Nicholas leads the walk, and the angels that flank him on either side distribute handouts that inform on the legend and why Richmond has adopted it.

Those participating in the walk are reminded beforehand that they should not physically interact with anyone on the sidewalk, but they are encouraged to scare people gently. When the monsters needed to cross North Thompson Street from Ellwood Avenue, several took the opportunity to run through the traffic stopped at the red light and scare passengers through car windows.

In the seven years since the advent of the walk, RVA Krampusnacht has expanded to become a weekend-long event of Krampus festivities. On Friday, December 6, Gallery5 hosted RVA Krampusnacht’s “Yuletide Monsters”, with live music, DJs, a burlesque variety show, and a group art show featuring 25 artists. Before the walk on Saturday, they were back at Gallery5 for their RVA Krampusnacht Holidaze Market, featuring 14 local artists and vendors and a Krampus photobooth by Red Vein Army, the horror troupe behind the Red Vein Haunt in Ashland.

Sinisteria, another local horror troupe, brought their unique, demonic flavor to Carytown with their barbaric masks and costumes, heavy black makeup, icy white contact lenses, and the infamous woman on stilts, their co-founder Sabrina Elliotte. This was Sinisteria’s third year participating in the RVA Krampus Walk.

Red Vein Army has been involved with the walk since its inception, their participants always recognizably cloaked in red. Along with RVA Krampusnacht, they’re sponsoring a toy drive this year in partnership with Scares That Care, a charitable organization for horror fans to help sick children and women fighting breast cancer.

After its success last year, Red Vein is returning with another Red Vein Haunted Christmas on this Friday and Saturday only, December 13 and 14. It’s at their Halloween haunt location, Hanover Vegetable Farm, and the theme this year is “Attack of the Killer Snowmen.” Krampus is sure to make an appearance as well, in case you missed him last weekend.

If RVA Krampusnacht is news to you, and it’s good news, luckily you have a full year to acquire the most macabre ensemble of horns, wooden switches, and cowbells that you can bring together. Follow their Facebook page for a recap of this year, and news and information about next year’s Krampus Walk as it’s released.

Find more of Noelle Abrahams’ photos from the Carytown Krampusnacht Walk below. 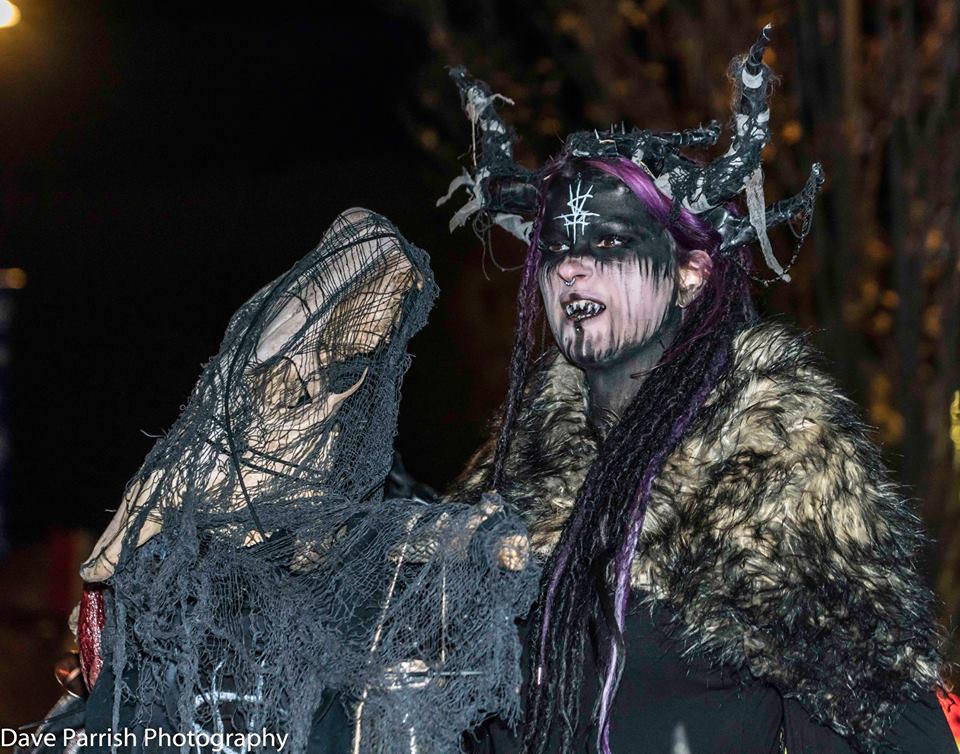 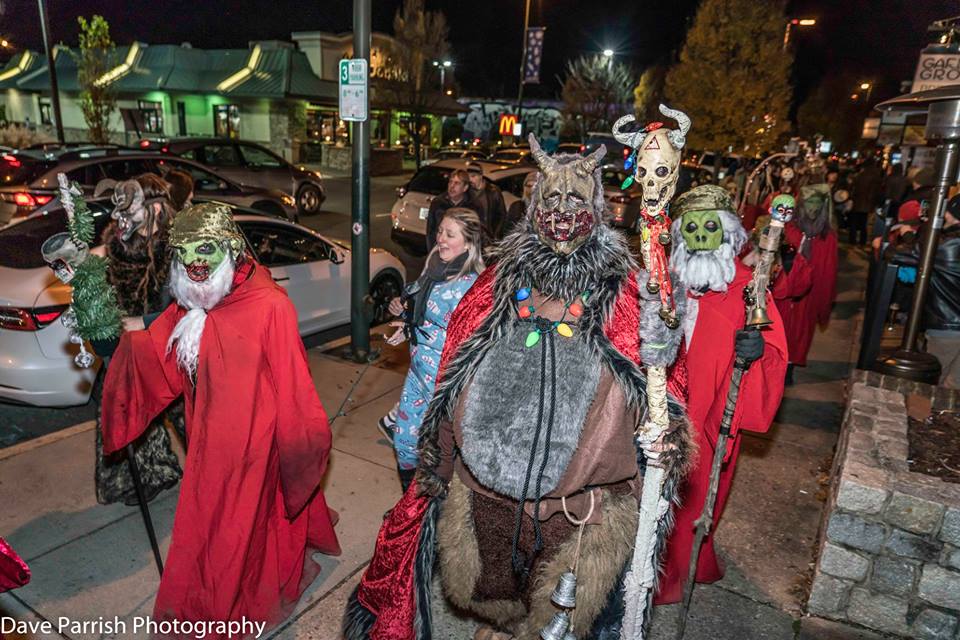 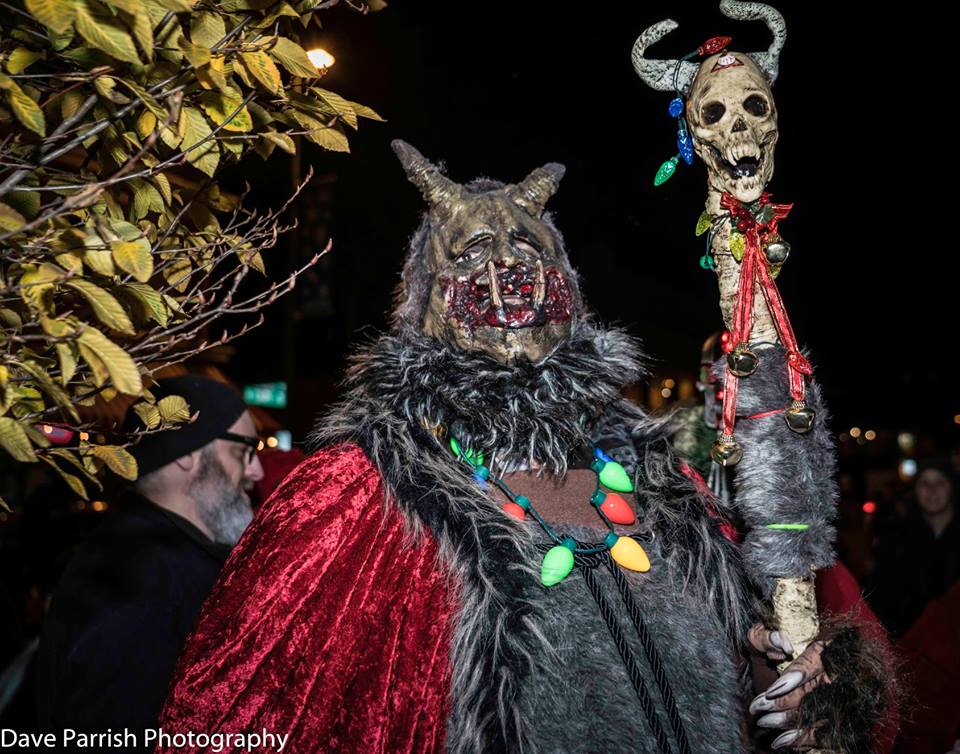 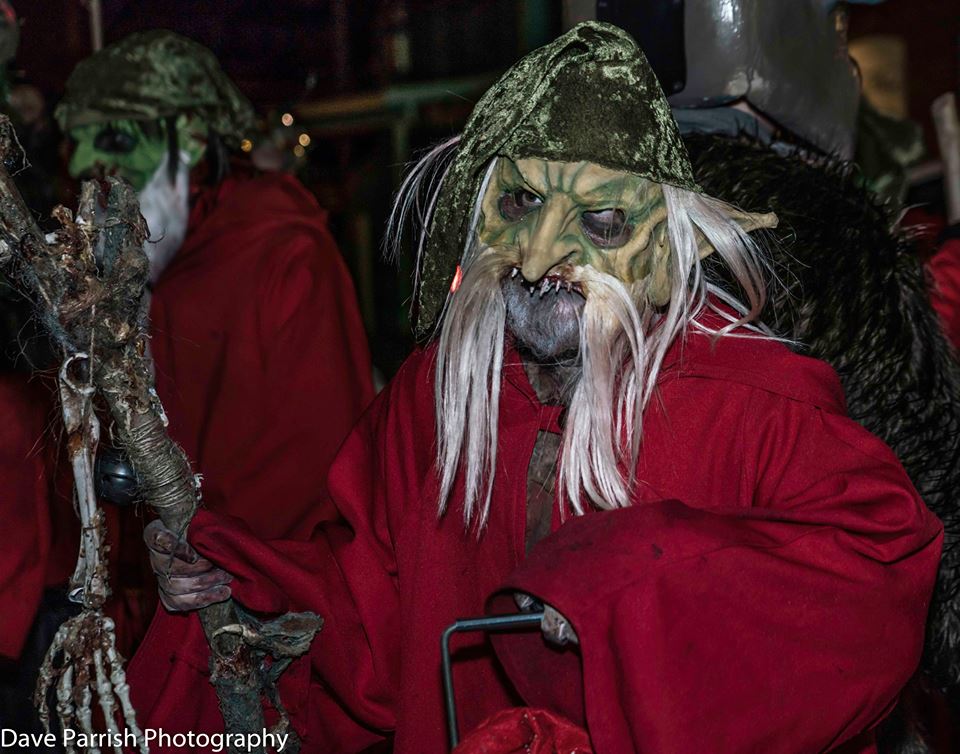 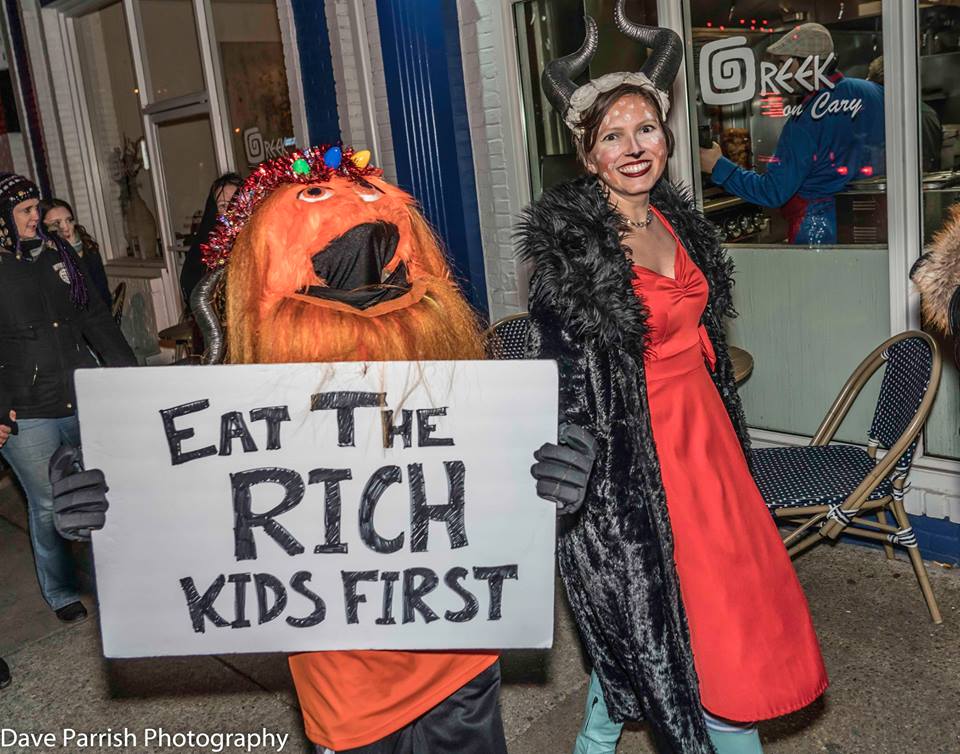 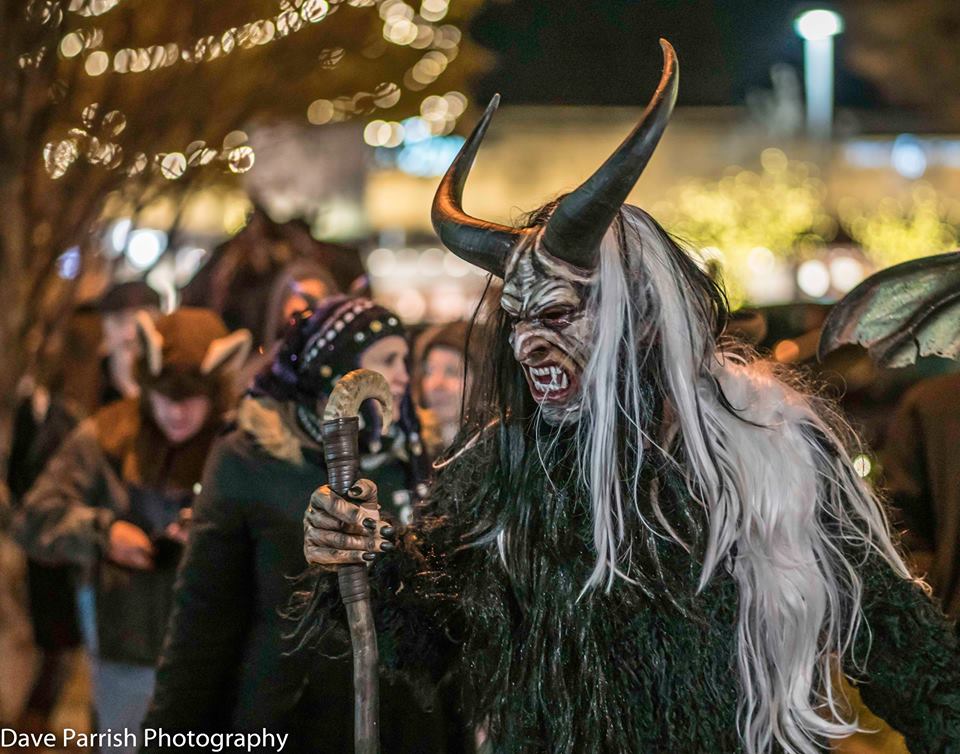 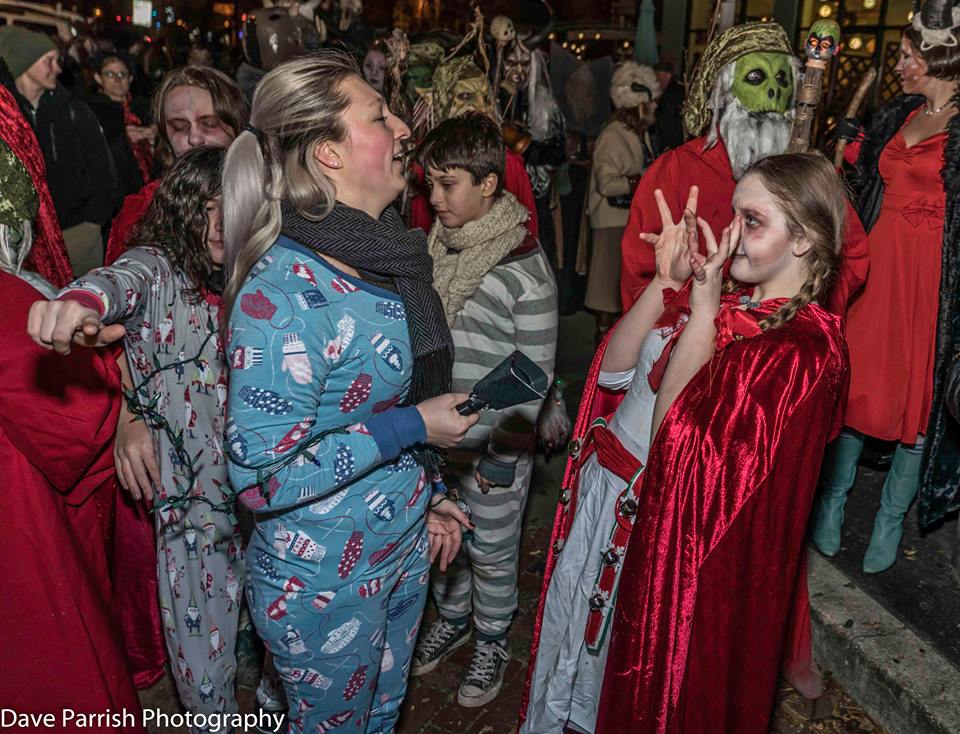 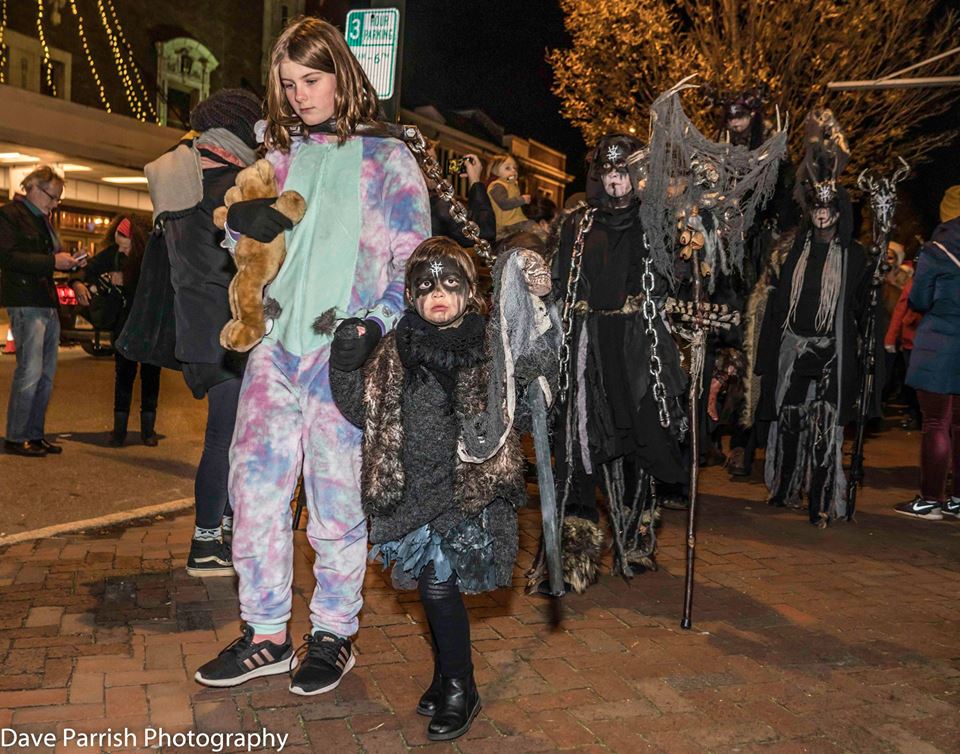 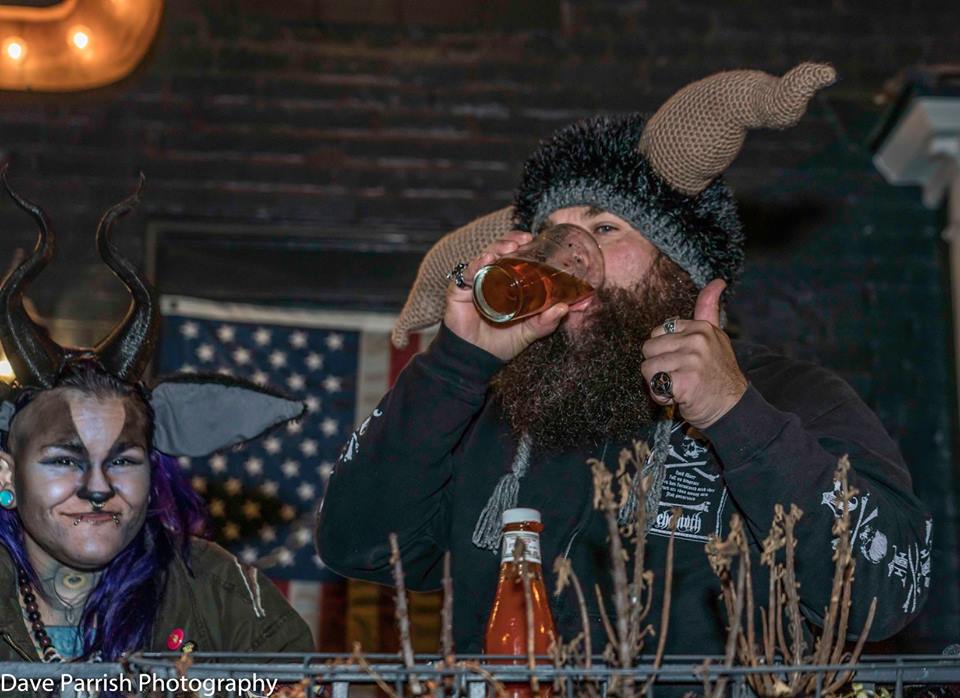 Grab your horns and switches and get ready to hide your children, RVA… Krampus will soon be here to scoop up all the bad kids and carry them off with him as he clangs his bells and chains.

END_OF_DOCUMENT_TOKEN_TO_BE_REPLACED

Last Friday’s weather was dark, gloomy, and terrible… perfect for celebrating Santa’s evil companion, Krampus, and the terror he brings with him.