In 2006 after being held at the Montgomery County Jail on robbery charges, Morva injured himself in his cell and requested to be taken to the hospital. Once there, he killed an unarmed security guard while escaping and later shot and killed a sheriff’s deputy who was searching for him near Virginia Tech’s Blacksburg campus.

“We are deeply concerned about information we have received indicating that Mr. Morva’s original trial did not meet fair trial safeguards, which include reasonable accommodation in all stages of the process, and may therefore have breached international standards.”

Morva’s lawyers are also asking for clemency from McAuliffe. According to his legal team, Morva suffers from mental illness and delusional disorders, which impaired his judgement and provoked him to act fearfully when he was being held at the Montgomery County Jail. Morva’s lawyers further argued that the jury was given false information about their client’s mental state.

One of Morva’s lawyers, Dawn Davidson was thankful for the United Nations’ announcement, which accompanied a petition of 34,000 people who have asked McAuliffe to stay the execution.

“William was denied a fair trial because the jurors were not told about his severe psychotic disorder, and that his crimes were a direct product of his delusions,” she said. “Since the trial, William’s mental health has continued to deteriorate because prison doctors have refused to treat him.”

Davidson went on to clarify that his severe psychotic disorders provoked him to commit his original crimes, and his subsequent treatment by the Montgomery County Jail led him to feel endangered and thus commit more violence. 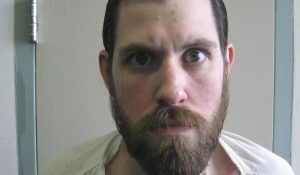 Photo from Virginia Department of Corrections/Handout

The US ranks fifth worldwide in total number of annual executions, averaging 28 per year – with more than 2,800 people remaining on death row in the U.S. While the US still falls well behind other countries in the total number of executions, it remains the only western country that still routinely executes prisoners.

The debate over capital punishment has been ongoing for decades, yet with the UN’s involvement this becomes another high profile case in the national debate.

McAuliffe, has previously commuted death sentences to life without parole and granted clemency to other criminals, yet his decision on the Morva case will set the precedent for his predecessor – either Republican Ed Gillespie or Democrat Ralph Northam.

A spokesperson for Gillespie said the candidate would evaluate death penalty decisions on a case-by-case basis, and would consider mental capacity in his decision. Northam expressed trust in Gov. McAuliffe’s decision, saying he expects the governor will come to a “just and fair decision.”

Like many death penalty cases, the decision on Morva’s life will be based off a multi-faceted timeline, trial, and ultimately a decision to intervene (or not) by the governor. Whether or not Gov. McAuliffe will take the last minute recommendation of the United Nations remains to be seen.

Morva is set to be executed tonight at 9 pm at the Greensville Correctional Center in Jarratt, Virginia.

RICHMOND – Death penalty opponents lost a battle this week when a House committee endorsed a bill to make electrocution the default punishment if lethal injection is unavailable.

END_OF_DOCUMENT_TOKEN_TO_BE_REPLACED

As the controversy surrounding the drug cocktail used for lethal injection grows, Virginia lawmakers and the state’s Department of Corrections are looking for an alternative default route to carry out the death penalty.