Confused. Questioning. Hoping for a brand that didn’t pull through. That’s how hundreds of supporters were left when local streetwear clothing brand, Damaged Kids, disappeared back in 2016.

The brand took off with an unconventional take on streetwear clothing at the time. “Back in 2015, streetwear, in my opinion, had a really big ego,” co-owner Lauren Versino said. “You had to have money, and wearing it had a certain social class statement. It was hard to enter into because it seemed pretentious at times.”

So instead of playing into the showy, pricey streetwear clothing they were used to, Bierman and Versino made simple streetwear designs that in Versino’s words, embodied the idea, “the clothes didn’t make you cool, you made the clothes cool.” As the brand grew larger, Bierman and Versino worked hard to get t-shirts out, covering all of the production costs out-of-pocket. “We did this all ourselves,” Versino said. “We paid for it all ourselves for a long time.”

But as shirts became popular, they sold out quickly, and the two had to make bigger runs – which got more expensive. To find the upfront money, Bierman and Versino created a Kickstarter campaign at the end of 2015 which rolled into early 2016.

In addition to production expenses, the Kickstarter played a role in mobilizing Damaged Kids’ move to Los Angeles, where Bierman and Versino hoped the brand would take off. As the manufacturing capital of the country, L.A. was the place to go to make Damaged Kids bigger than just a Richmond streetwear company. So Bierman and Versino attempted to move the brand to L.A. – but they didn’t get the launch they were hoping for.

“Then we moved [to L.A.] and…nothing happened,” Versino said.

Once Damaged Kids flopped in L.A., the brand struggled to find its footing and not long after that founder and co-owner Bierman ended the company, surprising Versino. “When Damaged Kids ended abruptly [in 2016], I read it on Twitter,” Versino said. “I didn’t know before then. I have as much information as everybody else did when that popped up on the Internet. I just knew all of a sudden I didn’t have a job anymore.”

The struggling company’s sudden ending was a surprise to its co-owner, supporters, and GoFundMe donors. To this day, Versino is still not completely sure why Bierman ended Damaged Kids. Her best guess is the move from Virginia to L.A. was a lot, and maybe at times too much, to handle. The two moved in together in L.A. and Versino thinks the strain it caused on their relationship definitely played a part. 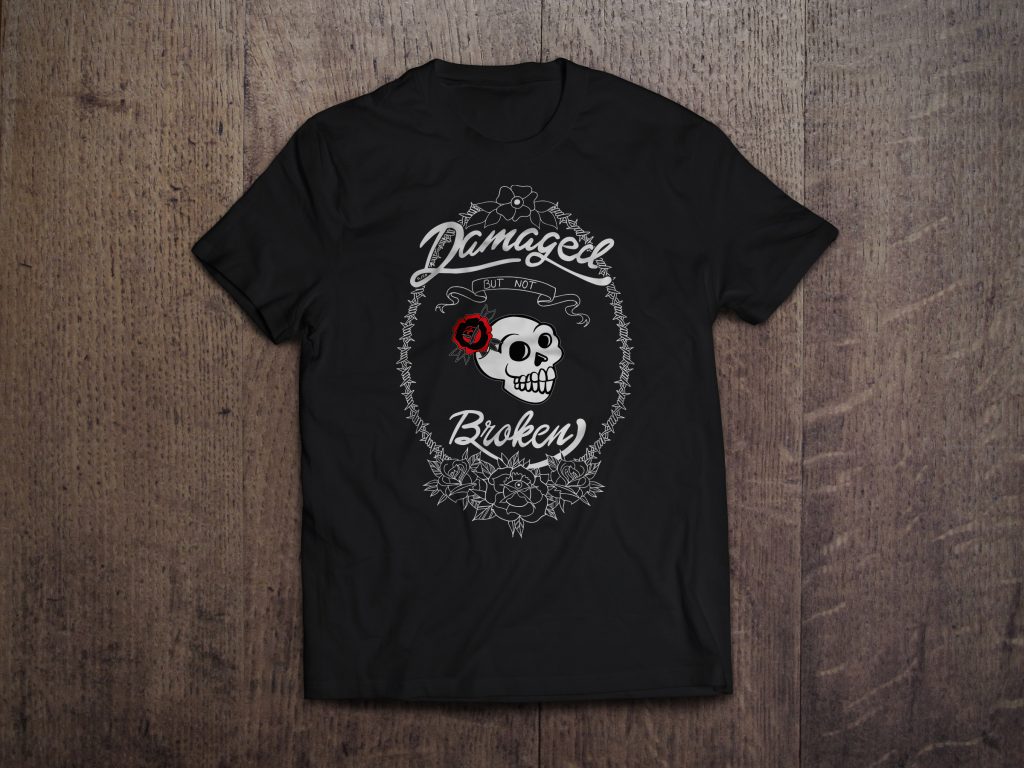 “There was a weirdness after we became roommates,” Versino said. “We had always just been friends, nothing more than that. But he kind of grew distant. We stopped talking a lot even though we shared a space and eventually we had to go our separate ways.”

While Versino isn’t curious to find out why Bierman suddenly ended Damaged Kids, she’s decided to offer her side of the story. Two years later, she is relaunching Damaged Kids to give supporters the answers they didn’t get back in 2016. And this time, the brand is all her own. “It’s just me this time around. I’m in control of the information,” Versino said. “I’d like to turn this shitty story into a good one.” The 27-year-old Virginia native is doing things differently the second time around to make sure Damaged Kids supporters and fans get the products they loved in 2015.

“I always felt it was wrong that those people gave to this GoFundMe and had this expectation that they were going to get all these designs,” Versino said. “They were investing in it…and they never got anything back.” For the Damaged Kids temporary re-launch, Versino is offering five different designs in a multitude of cuts, colors, and price ranges; most of which are reprised of the designs people were familiar with before. And instead of attempting to cover all production costs with her own money, Versino is taking the safer route, using a t-shirt company called “Threadless” for help with manufacturing. Local to Chicago where Versino lives now, Threadless enables artists to easily produce apparel designs, handling the manufacturing, shipping, and customer disputes.

“One of the major things that I took away from my experience with Damaged Kids was understanding the responsibility of saying something to a consumer base and having to follow up on what that is,” Versino said. “Because sometimes, your heart’s bigger than what’s possible at the time. I [know] how wrong something can go when you overpromise and underdeliver.”

Even though the brand will be based out of Chicago this time around, Versino hopes to clear the air with fans of the brand who were disappointed two years ago. And in addition to bringing back well-loved designs, Versino is doing what she and Bierman wanted to do the first time around, by donating a portion of each sale to community organizations. 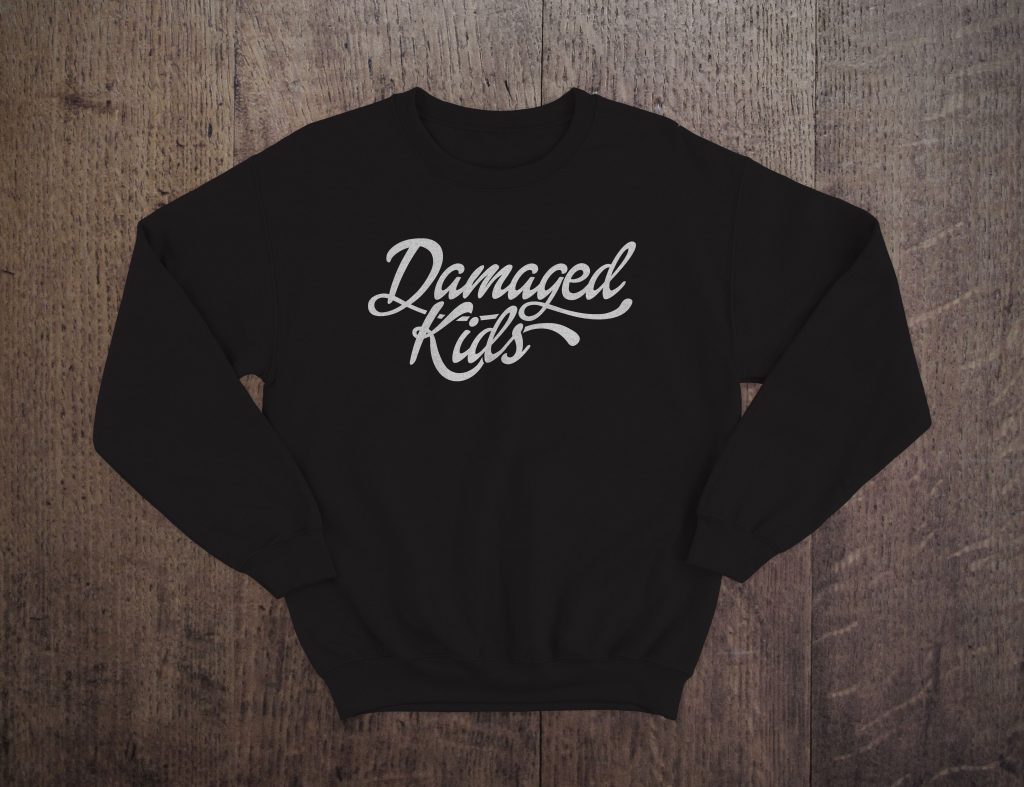 Back in 2015, Bierman wanted to donate to organizations that helped increase access to mental health tools for everyone, especially young people who might not know where to turn. At the time, the passionate pop-punk singer told RVA Mag the concept behind Damaged Kids came from wanting to support those who are suffering. “I just really wanted to take the idea of [how] right now it feels like the end, but it’s not,” Bierman said. “You’re just damaged, not broken.”

Damaged Kids never made enough profit back in 2015 to be able to donate to any mental health organizations. But now in 2018, Versino projects enough profit off the relaunch to donate a portion of each sale to the Rape, Abuse & Incest National Network, an anti-sexual assault organization. Versino made sure to set up the relaunch so her profit would allow her to make donations to RAINN, an organization very close to her. “It’s a service that I’ve had to use in my life. I kept their hotline number in my phone for two months before I actually found a resource to go to therapy,” Versino said. “It gives them [victims of sexual assault] a resource to talk to somebody. I would love to give back, and I wanted to keep that spirit alive with this re-release.”

And despite what supporters may think about the temporary relaunch, Versino said she isn’t in it for the money or out of spite for her ex-business partner.  “I just really want [Damaged Kids] to have the ending I think it deserves,” Versino said. “And actually following through with what was promised, even if it’s two years later.”

You can check out Damaged Kids apparel at laurenversino.com/damaged-kids-2018.

After being around for a few years it’s not uncommon for a band to experiment with their sound, tweaking it and changing it into something new.
END_OF_DOCUMENT_TOKEN_TO_BE_REPLACED