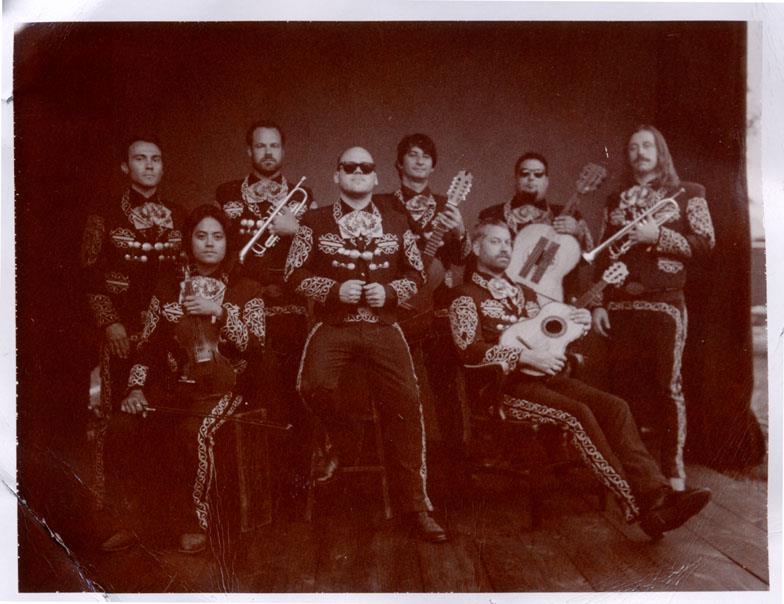 After being around for a few years it’s not uncommon for a band to experiment with their sound, tweaking it and changing it into something new.

After being around for a few years it’s not uncommon for a band to experiment with their sound, tweaking it and changing it into something new. By 2009, Los Angeles punk band The Bronx already had half a decade of performances and albums under their belt and wanted to experiment, but with something in wild contrast to their genre: mariachi music.

Yes, you read that right, punk rockers who also play mariachi music. The Bronx formed in 2002 and the group hatched the idea for Mariachi El Bronx in 2007. The group busted out the charro suits to play at The Broadberry May 17 and frontman Matt Caughthran chatted with RVA Magazine recently about the mariachi project, juggling both bands and the reception from their fans.

“It was a strange idea on paper I know, but it felt right to us being a Los Angeles band,” Caughthran said.

But the question was raised — Why mariachi music? Why go from creating punk music with its heavy instruments and themes to the comparatively lighter and traditional mariachi sound.

According to Caughthran a lot of the decision was based on where they grew up.

“I grew up in what’s basically the outskirts of east LA, and the other guys have been here pretty much the majority of their lives,” he said. “This style of music [mariachi] and culture it’s just kind of everywhere in Los Angeles.” “It’s a beautiful thing, and when it came time to switch gears and do something different we figured we’d give it a shot.”

Caughthran is not Mexican, but didn’t experience any apprehension or pushback trying to break into a genre steeped in Mexican tradition and culture.

“People still want me to sing in Spanish, I get flack for that all the time. But I don’t speak Spanish and I don’t want to butcher the language,” said Caughthran. “Mariachi El Bronx at its core is just our version of mariachi music. The primary reason I sing in English is that it hasn’t been done before, and we do original songs and try not to do any covers.”

Since he grew up in a Mexican neighborhood, Caughthran has always felt comfortable and understanding of Hispanic culture, drawing inspiration from it and never feeling out of context because he’s white.

“People have been cool to the band in general about the idea, because I think they know we’re coming from a real place, it’s something that we love and care about,” he said.” “We’re not trying to be assholes and kick the piss out of an amazing genre, Tthey get what we’re trying to do and they respect it.”

Another inspiration for the mariachi sound was the desire to create something unique.

“The goal should always be to do something different, to do something original,” Caughthran said. “You shouldn’t do it to be fake, you should do it in the name of creative exploration, self-expression, getting outside of your comfort zone.”

“You owe it to people who trust you to live a creative life, who buy you records and go to your shows. They do that because there’s a small part of them that lives vicariously through you and it’s a responsibility you have not to sit on your ass.”

“I’m not sure which one is Clark Kent and which one is Superman, but it is a little bit of a double life. It’s kind of a trip going back and forth between the two sometimes,” said Caughthran. “It does feel a little bit like a split personality, but I guess two personalities are better than one.”

Having two groups has allowed for El/The Bronx to feed off of each other, remaining fresh and memorable so as to keep one from overshadowing the other.

“They totally feed each other, they keep each other fresh and exciting, and they also fuel each other creatively,” said Caughthran. “The more work you put into it the better you get and the weirder rabbit hole you discover and can experiment with.”

Touring with both bands is exhausting, but affords the musicians the ability to tour with a diverse group of acts due to the different musical nature of both acts. Being able to tour as El Bronx even afforded the group and opportunity to perform in Europe, where Caughthran was a little surprised by their warm welcome.

“We were a little worried, like how are we going to play Mexican music where there’s no Mexican culture, people are gonna be like ‘what the fuckis this?” Caughthran said. “But it’s not that way, people just identify with the music. It’s a really beautiful thing. People aren’t as jaded as you think.”

The current tour they’re on allowed for them to come through Richmond earlier this month, something they’d never done before as El Bronx.

And if you missed them at The Broadberry, I’d suggest throwing out your former feelings on mariachi music and give these guys a listen. I stumbled across their video “48 Roses” and do yourself a favor and watch it. It’s hilarious.