I first had the chance to try a menu prepared by restaurant veteran Mike Ledesma back in August when he was brought on to serve as Executive Chef at Kabana Rooftop. From Chili-lime mussels in a coconut curry broth to ribs and tandoori lamb and fried oysters, his creativity with the cuisine is abound over at the East Main Street restaurant and bar so if you haven’t been to try it out, I suggest heading up there one night for some cocktails and a meal.

Anyway, when I heard Chef Ledesma was putting on pop up dinners at Belle & James, the restaurant below Kabana, I had to venture out to try his latest dishes.

Belle & James is currently hosting “Passport Pop Ups” on Friday and Saturday evenings and was created by Ledesma and restaurant owner Kunal Shah to introduce Richmond to flavors, recipes and traditional cuisines from around the world.

The restaurant completed a successful pop-up with the Philippines and decided to continue with a different country every three months. Passport Pop-up includes a-la-carte dishes with the option of a Chef Tasting for those who want to try it all, using traditional ingredients and aspects of the featured country along with signature cocktails and wine pairings to enhance the flavors of the dishes. 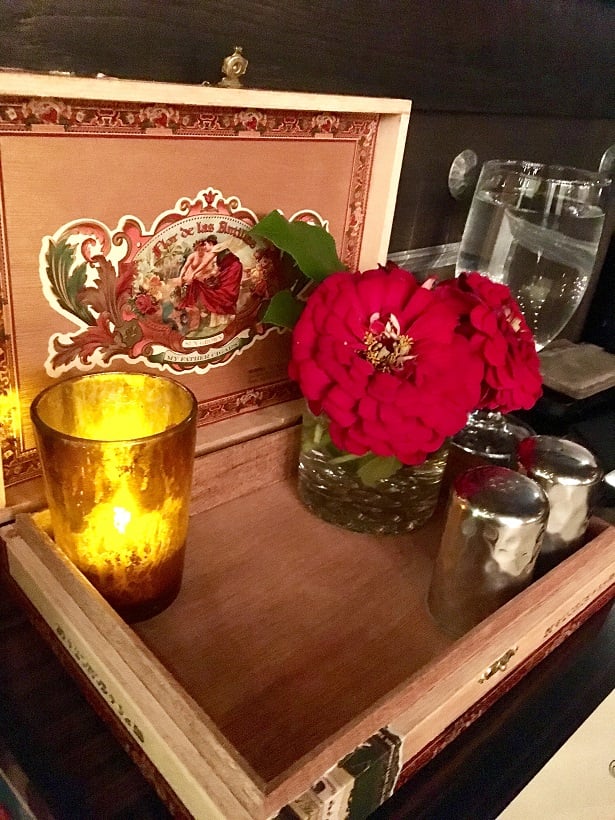 A few weeks ago, my fiancé and I had the pleasure of trying out their latest pop-up featuring dishes and traditional cuisine from Cuba. As soon as you walked in you were transported into Havana with festive music, and candles, red flowers and Cuban cigar boxes on the tables.

We started with cocktails. I opted for the Cubanita, a twist on the everyday margarita made with Camarena Silver Tequila, pineapple juice, lemonade, and lime. It was delicious and fresh and a must try if you choose to go to the pop-up. My fiancé enjoyed their Cuban Old Fashioned, made with an aged rum. Not for me, but definitely a manly drink that packed a punch with some flavor. 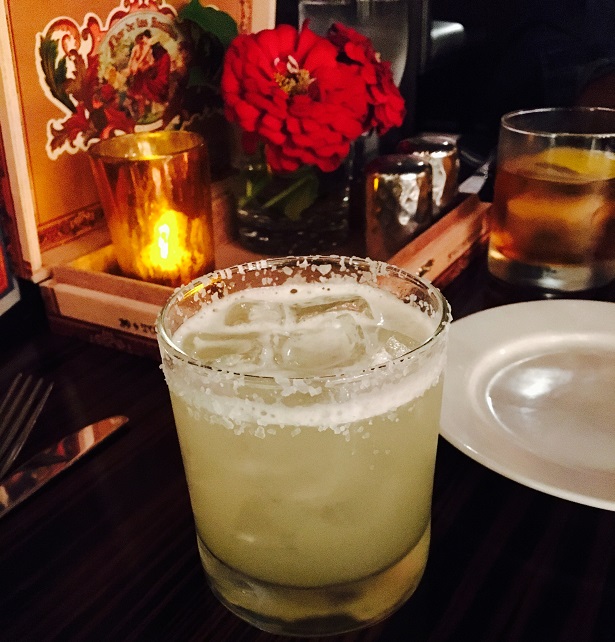 To curb our appetites, we ordered the empanadas  which came with a savory, creamy chimichurri sauce and we couldn’t get enough of it. The spicy ground beef and green olives were a delicious combination with the sauce and one of my favorite dishes of the night. This, along with every dish was plated and presented beautifully. 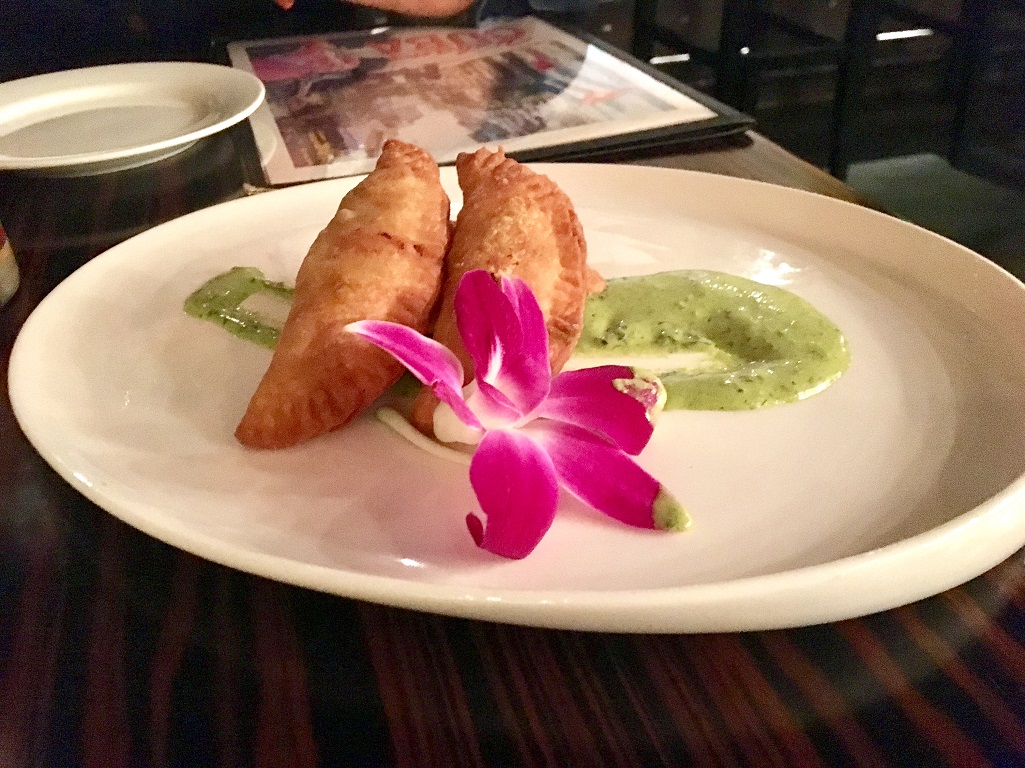 Next, Chef Ledesma brought Ropa Vieja to our table, which dazzled on the plate as well as the palette with all the different colors and flavors. With 12-hour braised and shredded flank steak as the star, the dish was supported by black beans, rice, peppers, onions, plantains, and yuca in a tomato base.  This was easily my fiancé’s favorite dish of the night, he couldn’t stop raving about it. The meat was so tender and flavorful and a burst of different spices danced around in my mouth as soon as I took the first bite. The savory dish was filling and cozy. 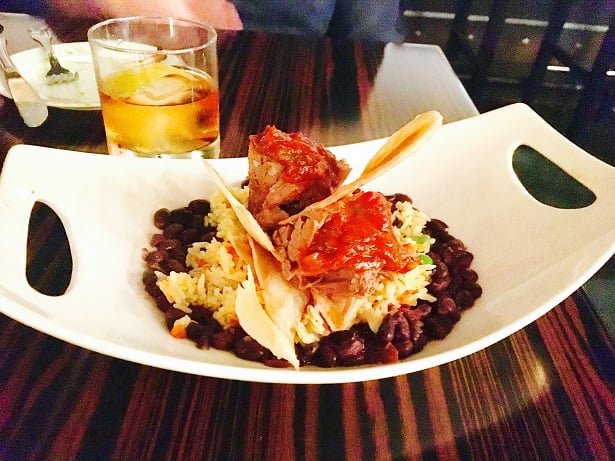 After that, Cuban Mojo Shrimp were brought to the table delicately placed on a plate with a flower and some more of that delicious chimichurri sauce. The huge shrimp were marinated in garlic and orange juice, chili flakes, oregano, and cumin and were juicy and not chewy at all. It was a good little appetizer to satisfy your cravings and pair with a cocktail while we awaited our main course. 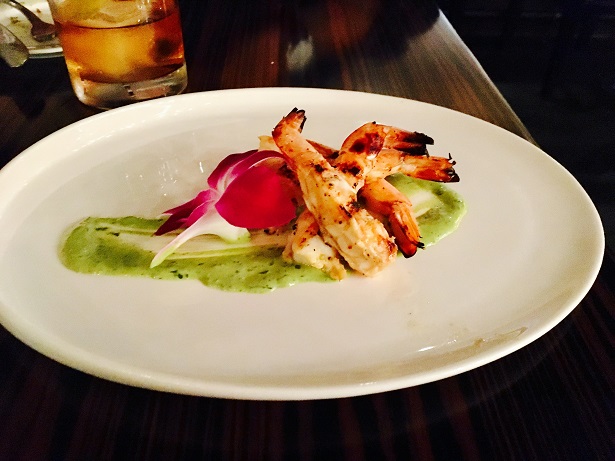 For the main dish, we decided to try the paella which is big enough for two people, maybe even three to share. It’s brimming over with flavor and comes steaming hot in a cast iron skillet packed with New England lobster, mussels, clams, Spanish chorizo, and peas, mixed together splendidly with rice. It was hands down one of the best paella dishes I’ve tasted. I loved the spicy chorizo and the shrimp were huge. Some paella dishes only come with a few pieces of protein and are packed with rice,  but as you can see from the picture below, that wasn’t a problem. I will say the only item I wasn’t absolutely crazy about in the dish was the lobster, but it could have been just me because my fiancé thought it tasted great. 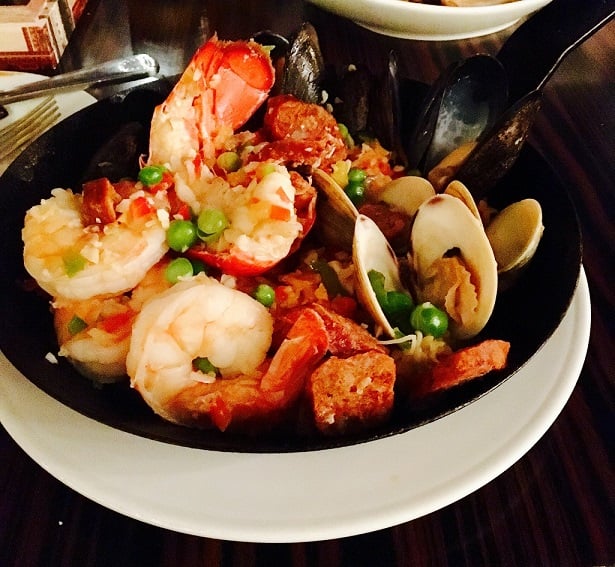 For our final course, we decided to try the plantain tarte, a soft and flaky puff pastry made with plantains, cinnamon, and rum topped with a scoop of ice cream. It wasn’t too sweet and was the perfect size to wrap up your meal so your sweet tooth was satisfied, but didn’t leave feeling overstuffed. 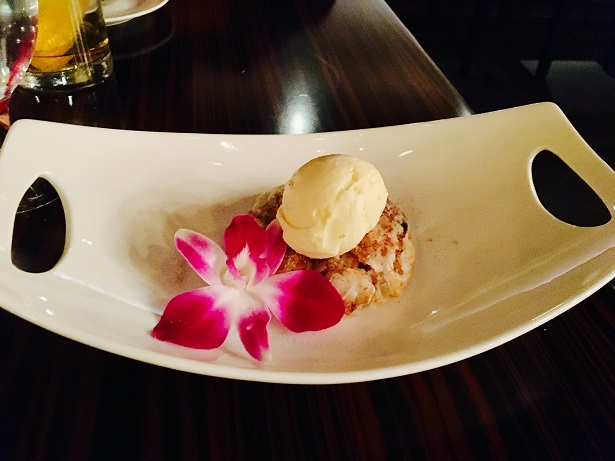 All of the appetizers at Belle & James’ Cuban Pop Up are under $15 and all of the entrees are under $30 with the exception of the paella, which serves two people. From the atmosphere to the music, the cocktails, and the delicious dishes, the Cuba Passport Pop Up is sure to satisfy any palette and if this one is any indication of forthcoming pop ups, the series is bound for success. The next Cuban Pop Up will kick off this Friday and Saturday night. Be sure to go try it before it comes to a close Dec. 29.

And be on the lookout for an in-depth interview with Chef Ledesma in the next print issue of RVA Magazine!