VA PrideFest is the largest annual celebration of the Lesbian, Gay, Bisexual, and Trangender (LGBTQ+) community in the Commonwealth.

Planned and implemented by Virginia Pride, this FREE, family-friendly day of festivities feature a variety of vendors, local eats, activities, and entertainment for a day of fun in the sun!

More details will be posted as they become available.  In the meantime, please consider joining our mailing list, signing up to volunteer, or making a donation to ensure VA Pride continues to serve Virginia’s LGBTQ+ community, and to keep the festival free!

Virginia PRIDE comes back to Brown’s Island this year on Saturday, September 11.

When you enter The Tottering Teacup, you’re immediately welcomed by displays of pride. Various coordinating colors string together to create a handmade knit hat on each of the workers in the tea shop. The hats’ color combinations symbolize a different identity, from bisexual to genderqueer. The way owner Anatash Werne describes it is, “We all have our own hats for our own flags.” And even if you don’t feel comfortable displaying your own flag as boldly, Werne wants you to feel welcome at The Tottering Teacup.

Opened in 2016 by Werne, The Tottering Teacup is a tea shop located in Carytown serving hot tea and small sandwiches, along with other drinks and foods. The shop offers a variety of teas including black teas, green teas, white teas, oolong teas, fruit teas, and herbal teas. Depending on how long you may be staying, you can order a single pot, either in small or large, or an endless pot, also featured in small or large sizes. And as the humidity continues into fall, hot tea isn’t the only thing one can get. There is also iced tea and iced coffee along with sandwiches and homemade baked goods.

Werne, who uses they/their pronouns, says that they’ve always been baking, ever since they were a child. But baking wasn’t the only childhood memory that convinced them to start their own shop. “My mom opened up her own business so I saw her go through that whole process,” they said. “I’m sure that kind of emboldened me.”

Childhood offers an enduring source of creativity that is often lost in adults. Pointing to their childhood experiences of baking as inspiration, Werne said, “I have always wanted to be a baker.” And now they are making such creative goods as lavender bread and Pride-themed macarons. Each year, during Pride month, the sales from their Pride-themed macarons go to Richmond LGBTQ youth outreach organization, Side By Side. 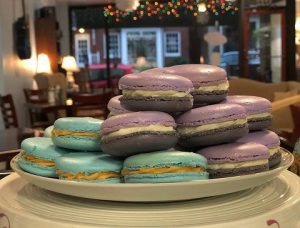 In the two years it has been open, the Tottering Teacup has had enough success that they are hoping to branch out with new events and new food. Every first Wednesday between 6pm and 8pm, they host an event called “Tea & Tarot,” in which three different tarot card readers are available to read your fortune. The business will be introducing salads soon, to help create a more inclusive menu for vegan patrons.

However, beyond the events, food, and even the tea, Werne would say their favorite part of running the business has been making connections with customers. “We have a lot of people who come in here who see the word ‘pride,’ and I think everyone expects a generic rainbow,” they said. But the Tottering Teacup goes far beyond the rainbow flag, displaying a number of other Pride flags that aren’t as well known.

“They’ll see the purple, grey, and white [asexual Pride flag], [and] they won’t necessarily understand what all the Pride flags mean,” they said. Werne is happy that they’ve been able to spread some “good, educational moments” about the lesser-known Pride flags within the LGBTQ community as a result of such conversations. 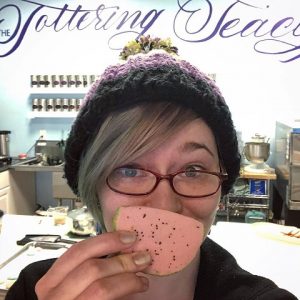 For Werne, the most important goal for the Tottering Teacup is to create a safe haven for young queer folks. Their hope is that LGBTQ youth who may not be comfortable being out yet will recognize the hats of the workers without having any of the paraphernalia boldly labeled with LGBTQ+ words or phrases. In this way, Werne hopes to make the Tottering Teacup inviting, without being overwhelming. Werne said, “I think this has been a long time coming.”

This story was originally published on GayRVA.

After the horrific 2016 shooting at the Pulse nightclub, Richmond’s LGBTQ community tried to come together for unity, but instead, found division. Vigils were organized locally by leading LGBTQ advocacy groups, but as happens all too often in American society at large, Black and Latinx leaders felt underrepresented and excluded by an event that was supposed to mark a tragedy that had touched them personally.

Remembering the aftermath, local activist and minister Lacette Cross said she wondered, “Why didn’t they call us? It’s not like the organizers don’t know queer Black leaders.”

That something is Black Pride RVA, a first of its kind event in Virginia, to be held this weekend in Richmond. Cross stresses that it’s not a competition with other local Pride events — she attends them all — but simply a way to provide representation to a group that faces additional challenges and discrimination. “This is not a homogenous world, and LGBTQ people are not homogenous. We’re not all the same gay, the same bi, the same queer. There’s a beauty in our diversity.”

The event is “a party with a purpose,” she says. Among the entertainment — highlights include a drag performance hosted by Alvion Davenport and Heaven-Leigh Kennedy on Friday night, a ballroom dance competition, and local rapper McKinley Dixon headlining on Saturday — Black Pride RVA will also feature a range of family-focused activities and educational classes. From a workshop on mental health, subtitled Navigating Your Truth in a Trump Era, to financial wellness classes and Black LGBTQ history, Cross has prepared a diversity of programming to make sure that the event serves the community it represents.

It has taken time to plan the event from those early discussions in September of 2016. After the talks, Cross founded a non-profit, Us Giving RVA Connection, and by February of the next year, the loosely-formed group had put together programming around Black LGBTQ history, creating the first Black LGBTQ History Month celebration, hosted by Diversity Richmond. They kept meeting monthly, knowing they wanted to do something bigger, and Cross took steps to make the process as inclusive as possible. “We wanted everybody to come to the table who wanted to be involved,” she says.

What she kept hearing was an interest in hosting a Black Pride event. While Virginia has never had a Black Pride event, they aren’t new; the first one was held in Washington, D.C., in 1991. It continues to this day under the umbrella group the Center for Black Equity, which plans other Black Prides around the country, and Cross knew who to turn to as she worked out the details on Richmond’s inaugural event.

“I got the Black Pride bootcamp, and it was amazing,” she says, talking about a series of training sessions she took in May of last year. That training introduced her to Black queer leaders from around the country, and helped her to schedule Richmond’s event to avoid conflicts with events both near, like Pittsburgh, Pennsylvania’s June 24 event; and far, like the Black Pride held earlier this month in Paris, France.

Cross has a videographer and photography team who will document the event, and with her awareness of Black Pride on the national scene, I ask her how big of an event we should expect. “This is our first year, but I see Black Pride RVA as a tourist destination, especially over the next two years,” she says. She turns dreamy for a minute, talking about future events, before she laughs, exclaiming, “Don’t print that! I’m dreaming big. Right now, I just have to get through this weekend.”

Black Pride RVA’s first official event is “Dinner and a Drag Show,” hosted by Godfrey’s this Friday. Tickets are $12 online, $15 at the door. For more info, click here.

Admission to the main event, the Day Of Purpose, hosted by Diversity Richmond on Saturday, is free of charge, but attendees are encouraged to get a free ticket online. For more info, click here.

Saturday night is an after-party hosted at The Speakeasy Grill; tickets are $15 online and $25 at the door. Tickets to this event, as well as VIP passes and more, are available at Eventbrite.

The weekend will close with a worship service at Third Street Bethel AME on Sunday morning at 11 AM.

For more info on all events, visit Black Pride RVA’s website at blackpriderva.com.

Deviant- Richmond punk for fun finding meaning in our useless lives by destroying whats around us. https://deviantrva.bandcamp.com

So as you know every Wednesday we run the craft beer column “Tapped.” If you missed this week’s check it out END_OF_DOCUMENT_TOKEN_TO_BE_REPLACED