Despite fewer destinations for recyclables, Virginia managed to recycle almost half of its trash in 2018. But there are still improvements that can be made.

Virginia recycled almost half of its trash last year, setting a record despite China’s ban on importing plastic and other solid waste.

The statewide recycling rate in 2018 was 46 percent — up 3 percentage points from the previous year, according to data released last week by the Virginia Department of Environmental Quality. The data showed that:

The numbers represent the percentage of municipal solid waste that is sent for recycling. Local governments also get credit for activities such as programs to reduce the amount of trash generated.

By April 30 each year, the local governments and regional planning units that oversee recycling collect their data and submit a report to the Department of Environmental Quality. DEQ reviews the information and then calculates an overall recycling rate for the state.

The increase came despite an unstable market for various types of trash to be recycled — especially China’s decision to stop accepting solid waste.

“China’s revisions in recycling material acceptance is having a big impact on the recycling market,” Beckwith said.

As a result, DEQ has asked localities and planning units to identify any changes or challenges regarding their recycling efforts when they submit their 2019 reports.

One change is that many localities have dropped recycling glass because it is hard to find a market for that product. That is why DEQ is asking Virginians to minimize their use of glass.

“Citizens should try to generate less waste, like purchasing products with the least amount of packaging and those that are readily recyclable, such as aluminum cans vs. glass bottles,” said Anissa Rafeh, the department’s communications coordinator.

“Broken glass can contaminate other recyclables like paper and cardboard, lowering their value,” Romuno said. Moreover, broken glass can be a safety hazard to workers and can damage machines at recycling facilities.

Also, glass must be sorted by color in order to reprocess for recycling. “Glass is difficult to sort when broken, and if broken down too finely, it may become too difficult to reprocess,” Romuno said.

Four localities in Northern Virginia have teamed up to tackle the challenge of glass recycling.

The city of Alexandria and the counties of Fairfax, Arlington Prince William have joined forces to collect source-separated glass in purple bins for better recovery. The glass is then crushed at Fairfax County’s Glass Processing Center to produce sand and gravel that can be used in construction and landscaping projects.

DEQ is also keeping an eye on new technologies to improve Virginia’s recycling efforts. For example, the agency was on hand when the Central Virginia Waste Management Authority announced it was deploying 2,000 recycling bins from an Israeli company called UBQ.

The bins are made with a thermoplastic created from household waste that would normally end up in a landfill, including banana peels, chicken bones, plastics and old pizza boxes.

A renovated diesel engine repair shop is home to a new food concept in Scott’s Addition. The Big Kitchen opened its takeout and delivery-based business on Wednesday, with the vision of creating meals from scratch that people can enjoy at home.

Restaurant co-owner Susan Davenport said they’ve been working on the space for a little over a year now.

The renovations include a storefront where customers can come in and pick up their order, as well as a walk-in cooler and a smokehouse in the back.

“This was the original bay where the semis would come through and drop their engines to be repaired,” Davenport said. 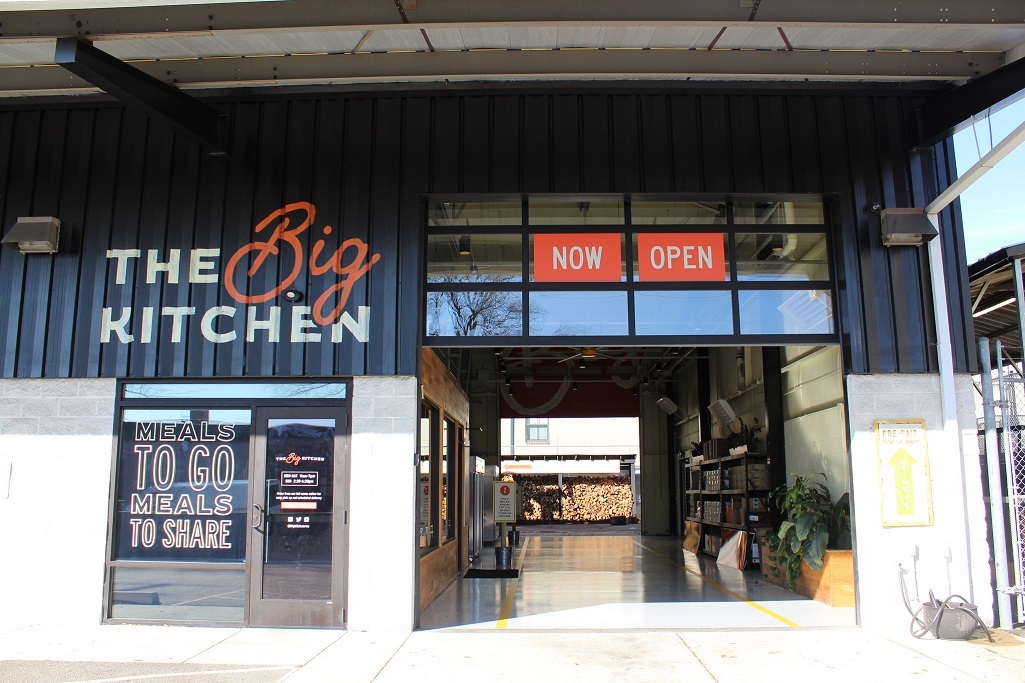 Customers can choose to drive through the covered garage to pick up their order from an employee or peruse the storefront options inside.

The menu offers a variety of items ranging from nacho kits and wood-fired frozen pizzas to bottles of wine and packs of beer.

“We have a really great team of chefs behind it,” Davenport said. “We have a lot of great sourcing with local purveyors, whether it’s our cheese or our meats, or especially in the growing season, the farms that we work with.”

The four partners behind The Big Kitchen formed Big Kitchen Hospitality, a local group that also operates Tazza Kitchen in the West End along with an outpost in Scott’s Addition. 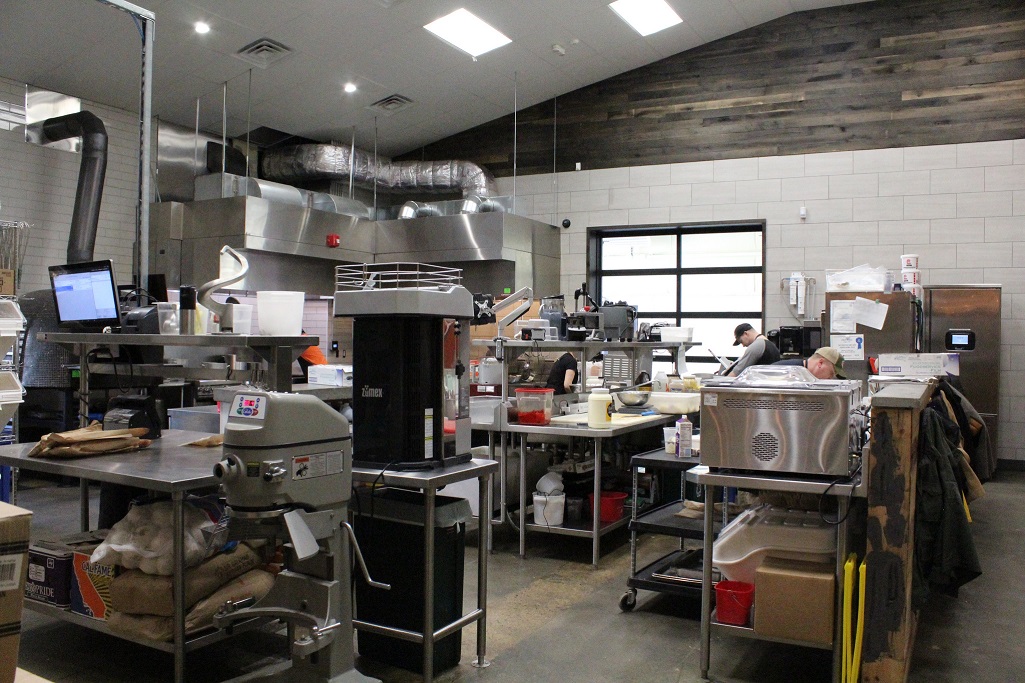 The group said it has a staff of more than 300 employees working in its six full-service restaurants, three which are located in the Carolinas. Davenport said the online ordering technology and experienced food staff distinguishes The Big Kitchen from other carry-out concepts.

“You can order ahead and order several meals for a few days or some sides or frozen pizzas, and when you select your time for it to be ready, all you have to do is pull into our bay and we bring your order out,” Davenport said.

The Big Kitchen plans to launch food delivery service next month and will use refrigerated vans to keep the food fresh. Each item comes with heating instructions on the top label.

Jeff Grant, a BKH partner, said numerous people were involved in many trial runs to test recipes, along with the process of packaging and heating the prepared meals.

“Wood-fired cooking is still prominent, and we’ve included a few Tazza favorites, but we are excited about the new dishes and flavors that this team has put together,” Grant said. 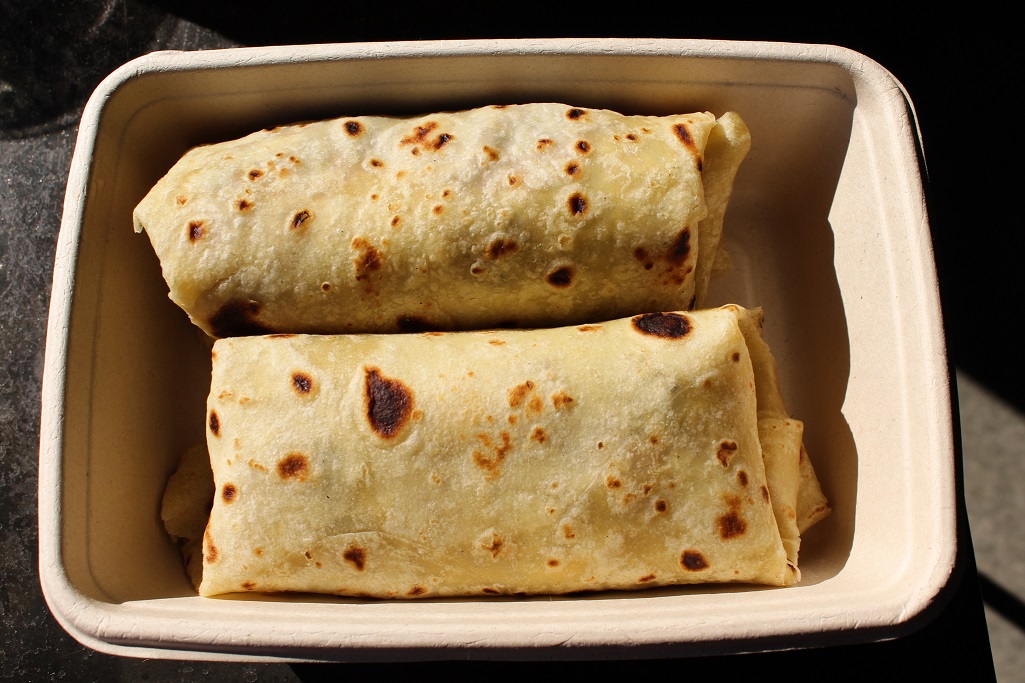 Davenport said The Big Kitchen will offer customers the option to bring back used packaging for the staff to compost.

“I hate plastic, and so most of our packaging is compostable, and we actually compost everything organic here at this kitchen,” Davenport said. “Every month, we compost almost two tons of materials.”

The grab-and-go style market in the storefront offers freshly prepared items including sandwiches, smoked meats and salads. Storefront hours are 11 a.m. to 6:30 p.m. Monday through Saturday and 2:30-6:30 p.m. on Sunday. The Big Kitchen is located at 1600 Altamont Ave.