After a long, heated debate, change became the chosen path for Richmond today. According to the Monument Avenue Commission, Richmond Mayor Levar Stoney officially recommended the removal of the Jefferson Davis Monument today from Monument Avenue.

“Of all the statues, this one is most unabashedly Lost Cause [sic] in its design and sentiment,” the commissioners wrote in the report.

The board includes Christy Coleman, CEO of the American Civil War Museum, and Sarah Driggs, author of “Richmond’s Monument Avenue,” among others who look to direct the River City away from the ‘lost cause’ narrative many of these monuments represent. And with these monuments having origins in the Confederate ‘lost cause’ mythology and Unite The Right 2.0 coming up in August, the commission came as a much needed response for these controversial monuments.

After nearly one year of intensive study by the ten person commission, the group produced a 117  page report considering the future of Richmond’s Confederate statues, opening the floor to options including removal or relocation of the Confederate statues into a museum, or somewhere with proper context.

“In addition to taking on the responsibility of explaining the monuments that currently exist, I have also asked the commission to look into and solicit public opinion on changing the face of Monument Avenue by adding new monuments that would reflect a broader, more inclusive story of our city,” said Stoney in a statement one year ago. “That is our goal.”

The yearlong review examining the statues originally created to “determine how best to reconcile a particular landscape viewed as both sacred and profane,” is now figuring that for many of the statues, removal is the best option. Riding off the recent change to the Barack Obama Elementary school last month, this is the first of many necessary reforms to a city that has never truly healed.

The report also addresses the monuments of Confederate Gens. Robert E. Lee, J.E.B. Stuart and Stonewall Jackson, President of the Confederacy Jefferson Davis and Confederate commander Matthew Fontaine Maury with short term changes that will add context to the statues, such as proper signage. They will also consider the opening or expansion into a museum exhibit, where the monuments may be put into proper context that reflects the newly inclusive historical significance the city wants to promote.

The commission’s site currently offers an open forum for public discussion, but is also developing a mobile app and new film and video that looks to rewire the proper narrative about Monument Avenue that is “consistent and historically accurate.”

In a fitting end to their misadventures, the organizers of the neo-Confederate rally today reached out to supporters for donations via GoFundMe, raising $220 from two individuals before deleting the campaign. The group used social media throughout the days leading up to the rally to advertise sales on Confederacy memorabilia which they were selling from the back of their pickup truck.

The funding request came shortly after a confusing Facebook live video by co-organizer Tara Brandau claiming that they were being chased by a swarm of attackers as they drove away – a narration informing viewers that their tires are flat. However, when they stop the truck, the camera shows what appeared to be two people on commuter bicycles and several police officers in a peaceful, non-threatening situation.

A previous video documented their departure from the rally site as several calm police led them out. Brandau called their exit an ‘extraction.’ When the small group reaches their pickup truck, they state that the tires are slashed before starting the engine to leave.

Richmond residents were not amused by their fundraising request. RVA Mag has collected some of the best of the now 145 responses before they were deleted:

Shortly before posting this story, the group deleted many social media posts, including the GoFundMe campaign and previously-mentioned videos. They also deleted a dubious post claiming that Black Lives Matter had tracked them and surrounded them at their lodgings; in another, that shots were fired by counter-protesters, despite police statements to the contrary.

*This story has been updated as of 9 PM.

Days of tension broke on Saturday as the neo-Confederate rally came to a peaceful end. Police have since reported seven arrests; one for disorderly conduct, two related to possession of weapons, and four for wearing masks in public. One woman was detained by police during a spirited verbal debate, and the pickup truck driven by the out-of-state organizers was towed due to a flat tire. Some 400 people were assembled, with members of the media alone greatly outnumbering neo-Confederates, who congregated in twos and threes throughout the assembly.

Dog walkers were out in large numbers by 8 AM, milling around the police cordons and talking to each other. Reactions to the upcoming protest were mixed; one resident supported Generals Lee and Stuart, but felt differently about the Davis monument. “Jefferson Davis was a shit. They should take him down, put up Abraham Lincoln instead,” she said, before heading off with her dog. Another dog walker expressed bemusement about the entire event. “I’m not scared, I’m more like, ‘what the fuck?'”

Although it was their rally, members of CSA II The New Confederate States of America didn’t arrive until later, after a counter-protest and rally had already started at the Maggie Walker statue on Broad Street. Nearly 200 people attended the earlier event, hosted by the First Unitarian Universalist Church of Richmond, the Richmond Peace Education Center, and the Virginia Interfaith Center. A diverse slate of speakers from area churches and non-profits gave speeches, including Aisha Huertas of the Episcopal Diocese. “There is no lost cause, but there is institutional oppression of people of color,” she said, questioning the narrative behind the rally. “We are a community of love. Love everybody. I even love the people standing for the statues. Let’s show them our love.”

On the sidelines, a Methodist minister described his motivation for attending. “I love God, I love Richmond, and I hate racism.” Next to him, a fellow pastor said, “Just justice, man. Just justice.” As the rally ended, they took to the sidewalk, followed by unaffiliated fellow counter-protesters from the Democratic Socialists of America and the Virginia Defenders, headed for a second rally at First English Evangelical Church at Stuart Circle.

The law-abiding group marched around 9:30, staying on sidewalks and coordinating with Richmond Police to keep road crossings safe and clear. They joined Hawk Newsome of Black Lives Matter of Greater New York and several local BLM chapters, standing together on the stairs to address the crowd. Newsome talked about the history of racism in Richmond, pointing to our status as Capital of the Confederacy and the slave markets here, before introducing a series of speakers.

After remarks, they and the interfaith group marched to the inner barricades of the Lee Statue, chanting for racial justice and equality. Protesters were without body armor or melee weapons, per earlier instructions by the police, who had no issues with banned items. A few men looked on disapprovingly, expressing worries that the peaceful group could turn violent, but the demonstration stayed peaceful and largely dispersed after a short period of chants and speeches.

In the buildup, police were widely credited by neighborhood association leaders and others for being communicative and proactive. They cordoned off the area around the Lee Monument on Friday, using city trucks, barricades, and police tape, and temporary fencing to limit access to homes. There were no reported acts of vandalism or property damage.

On the other side of Lee, tensions and tempers were higher, with a younger, less organized crowd of counter-protesters and a small handful of neo-Confederate folks. There was some name-calling and yelling, and many earnest discussions about the rally and the monuments. Sheryl Baldwin, a homeowner, came out to share a prayer, and to talk about her vision for Monument Avenue. “I want to keep the monuments, but I want to rebrand this street. Let’s call it the Story of Virginia. I want panels telling the whole story of this state, the good, the bad, the ugly.”

She’d been engaging another woman who was there to protest removal. We didn’t get her name before she became a target for the anger and frustration of passerbys, who screamed insults as they quickly walked away. She yelled back to a few before she rushed towards the Lee Monument, yelling at random. Within the crowd were two men standing quietly to the side, who identified themselves as Three Percenters from the Dixie Defenders Virginia Task Force. They’d been to Charlottesville, which they described as a false flag operation, aimed at stoking violence from its inception. They said they were there not to support any side but as independent peacekeepers, a function they were hoping to perform today as well. Next to them, an African American man with a Confederate flag held forth on racism. “What year did blacks get here? 1619. What year did the Confederate flag fly? 1861. Slavery was already here under the American flag.”

At the barricades, the woman who’d been engaged in verbal sparring earlier had reached a man holding a Confederate flag and the riot police, who moved in to separate her from the crowd and de-escalate the situation. Safely separated, the large mass of protesters continued to jeer and boo as she yelled back, sometimes addressing individuals directly, other times the whole assembly.

Off to the side, a different debate was happening, at a different tone of voice. Two men, one younger, one older, argued the merits of the monuments, the history of Richmond, and shared differing views on the lives of the men memorialized by the statues. As they began to debate socialism versus capitalism, protesters began to disperse, bringing a peaceful and fitting end to the rally.

But what about CSA II, the group that planned and organized this rally? According to social media, they are seeking $1000 on GoFundMe to cover towing fees and tire replacement to get home to Tennessee and Florida. 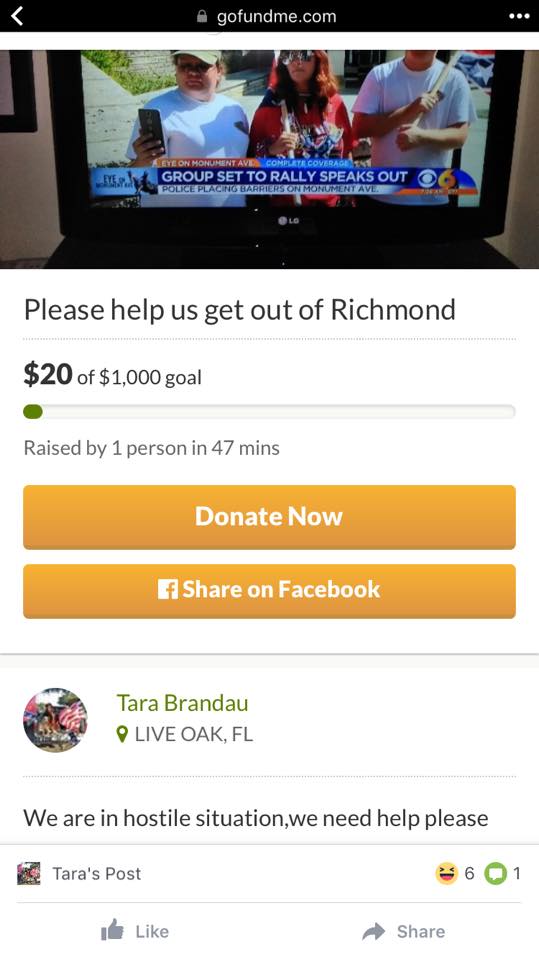 Cover photo by Landon Shroder, other photos by David Streever.