This past Sunday, music fans and hardcore record collectors came out at to the 6th Annual VG Minus Record Fair, put on my Steady Stounds and Vinyl Conflict, at Hardywood Park Craft Brewery. We spoke with some of the vendors, many of whom offered interesting perspectives, while some just expressed their love for vinyls. The quaint aroma of food trucks in spring outside was abruptly shut out upon the vinyl utopia inside. Spun wax of fantastic music I’d never recognize lifts an already bustling room- promise of a musical resurgence well distant from the overpriced music sections of ‘urban’ outfitting stores. With this fair, came invaluable insight into LP and artist history otherwise lost, as well as a heads up on an upcoming performance here from a major name in Richmond we at RVA Mag nearly let slip under our nose. Yep, this is what you missed at the Record Fair, where business and culture collide. 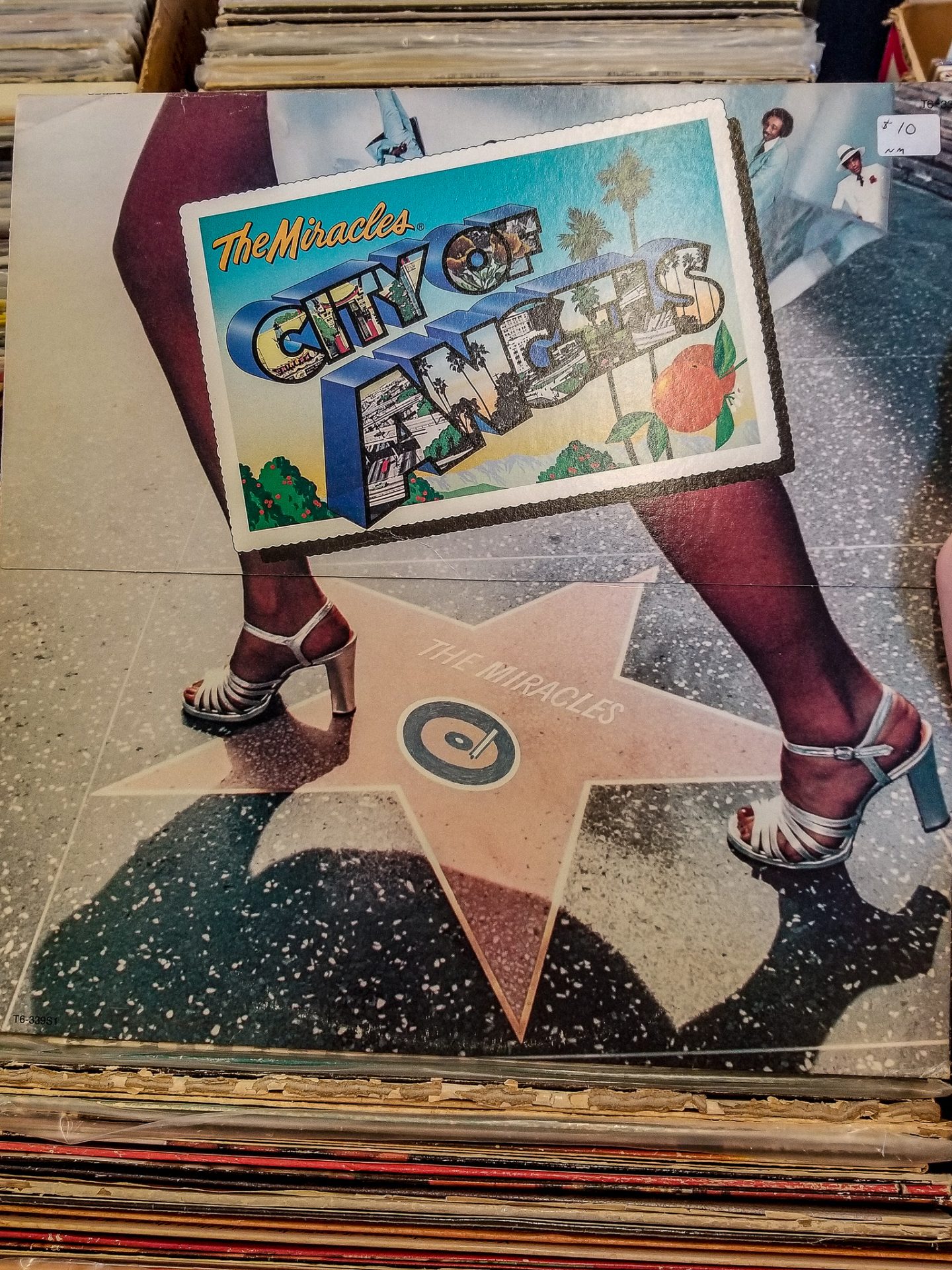 Scruffy regulars in their 30s sifted through classic rock with ironic nostalgia, millennials hop between islands of The Smiths sections- even parents were rummaging through with children in tow and morning beer in hand. And they had everything- Richie Havens, Slade, King Crimson, the desolate troves of dollar bins- at a non-fad price too. Heads remained dug down as numerous audiophiles ran their grainy fingers through the crates, most failing to skip a single track. At first, it was hard to jump in, panning the room for a spot to merge myself along the stream of steady traffic. 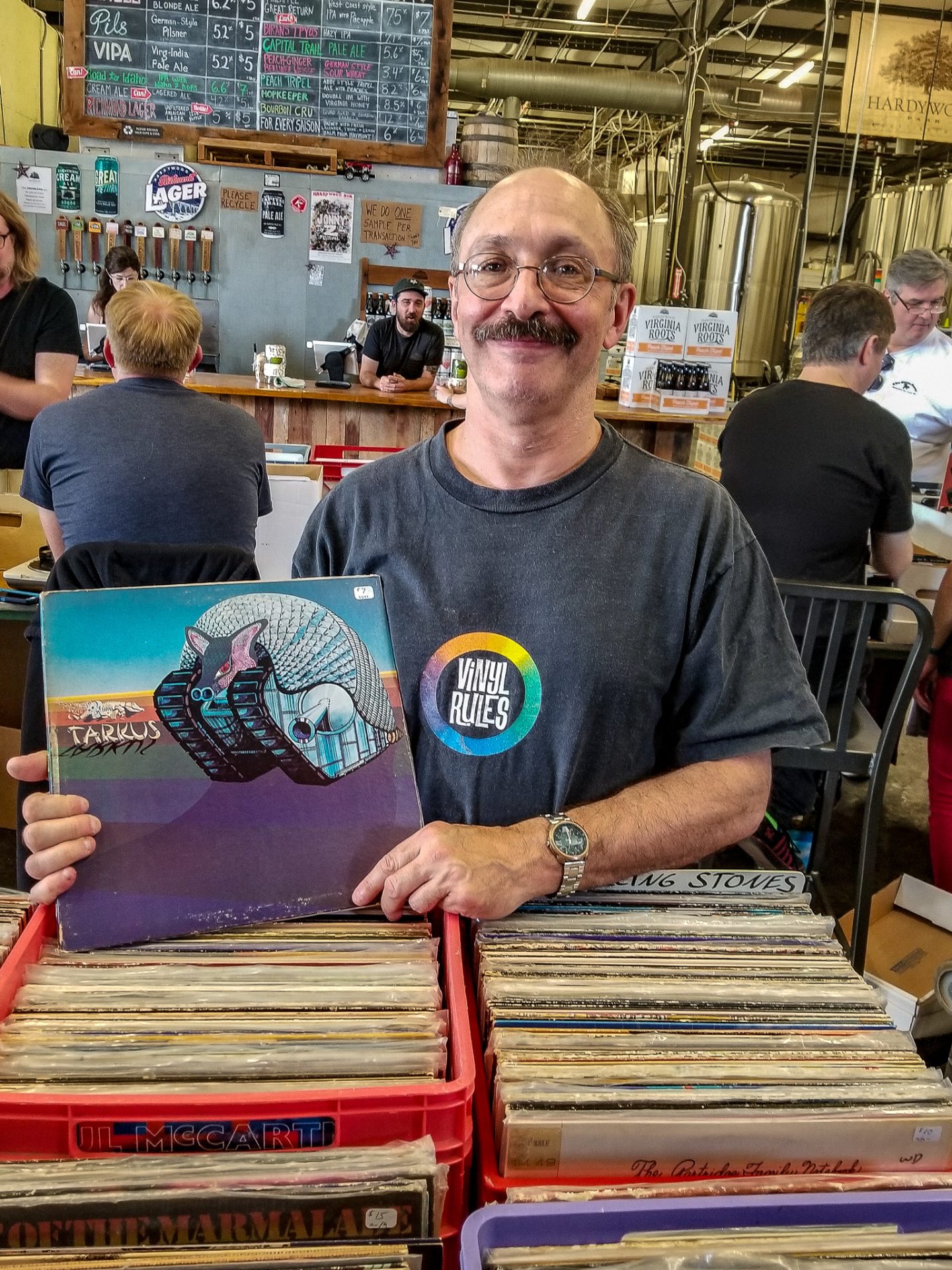 At first, I began with the intentions of finding the rarest collections available, only to find it standard not to bring anything too valuable to these events, though most collectors boasted theirs to be worth in the thousands in a nonchalant manner. I overheard a vendor haggle in brief with a customer, mainly over the supposed value of a Beatles’ Revolver. After a quick back and forth, the verdict became apparent as the customer relented, agreeing to buy as the vendor coaxed his decision with a victory lap, continually pressing his finger on the words “Japanese Release” in bold red. I jumped in to clarify.

“Japan prints on a higher quality,” the vendor, who later identified as James, began. I scanned over his collection, a detailed assortment of foreign delicacies and beyond. I asked him how one gets a collection like this. He smirks before clarifying the almost routine trade-offs before each event, where the dealers come to play. “Before we open we usually trade with other collectors, it’s a tight-knit community across the country.” Despite recently moving here from Orlando, James undoubtedly found it quick to find a space to show off his vinyl collection among the 10-15 vendors at the fair. 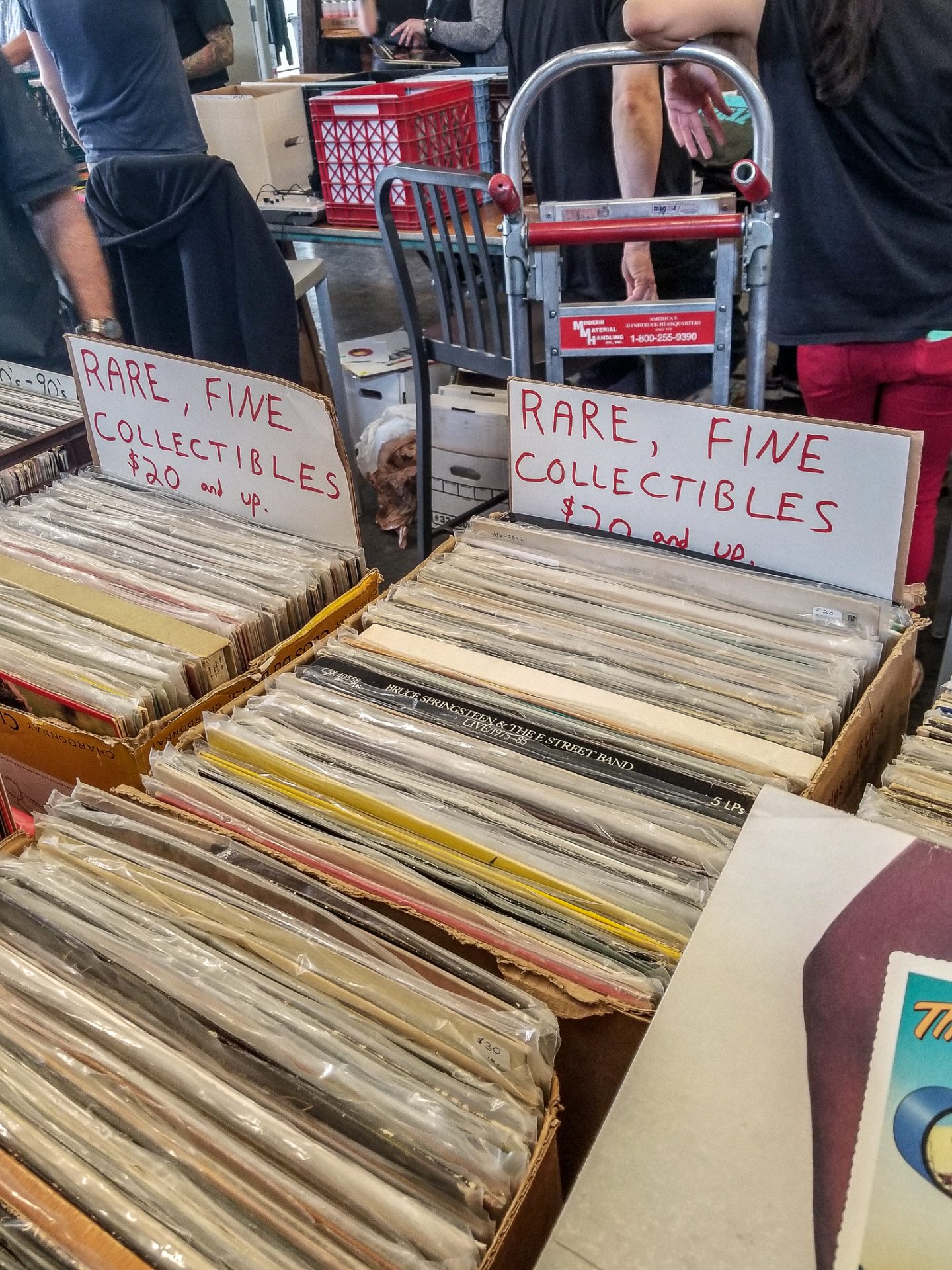 I asked which tracks sell the most, jumping the gun to quickly answer it for him, awaiting a generic gateway group like The Beatles or Pink Floyd. This time, I was not only wrong but kind of perplexed by the answer.

The next vendor had a much more enriched catalogue of progressive rock so I decided to begin my ever futile search for the highly renowned Court of the Crimson King. With some background knowledge and a knack for coming off like I understand things, I approached, through the vendor, who would identify as Tim, was quick to feel me out my lack of knowledge.

Like a psychic, Tim shot through the hands of another patron to sling out a vinyl you’d think he’d been saving all afternoon. Titled Tarkus, the 1971 release was a dusty treasure of progressive rock, performed by Emerson, Lake, Palmer; the group Tim professed would precede Crimson before they gained kingship. “King Crimson were the grandfathers to progressive rock and this is where he started. That and who doesn’t love an armadillo tank for an album cover,” Tim said. 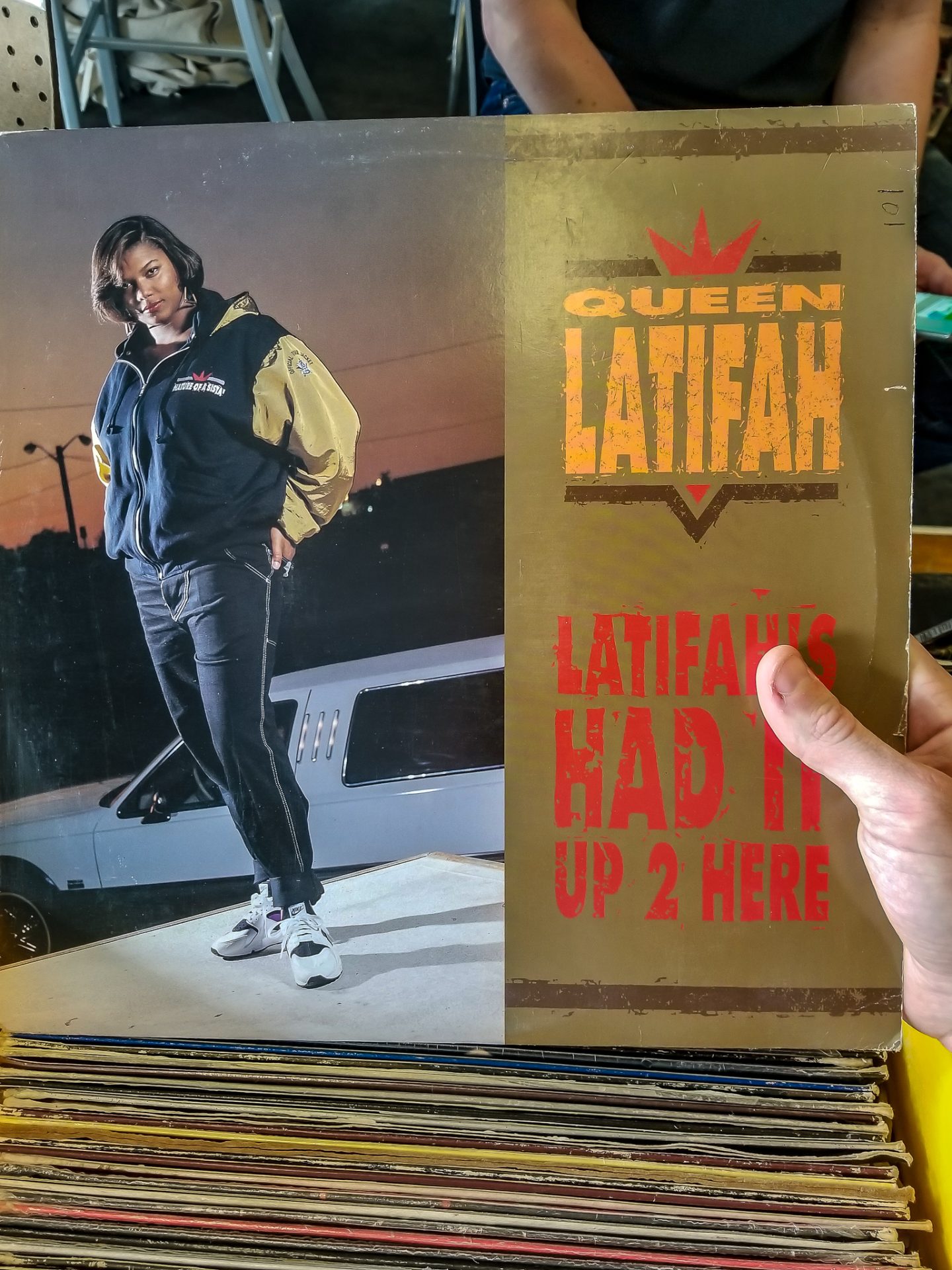 He went on to delve into progressive rock’s beginning, illustrating a clash between progressive and the ‘three chord drone’ punk rockers which led to new wave and neo-progressive explorations. “People began to say progressive rock became too exaggerated, over the top, though you couldn’t play Sex Pistols on the radio since nobody wanted to hear that shit,” he said, each blink a forceful stammer into his deadpan passion for the history. “This led to bands like Blondie and The Police, it was a progressive punk that was, essentially made for the radio.” After the brief rant, he went onto offer me a discounted price on the vinyl, far too preoccupied with showing me a picture of his King Crimson poster hanging over his living room couch to accept my thanks.

I spun onto another table to shoot for my instinctual safety net of 90s progressive rock, only to find a whole table dedicated to hip hop. From Gang Starr to treasures from afar, this table held a strong catalogue. I picked out a Queen Latifah track and asked the vendor, whose name turned out to be Jason, what it would sound like, only to be taken on a crash course into Def Jam records. “A lot of TV celebrities started out with Def Jam at the time, from Queen Latifah to LL Cool J, he was their first major artist,” Jason said.

He went on tell about some of his higher end tracks, enlightening me of several bands that may have had the sound, but just didn’t fit with the times. “There was a lot of artists trying to make it at the time, almost like the garage scene of today- a lot of people never really caught on,” Jason said. Before leaving, he told me about another artist, a Richmond native, who plans on having his first show next Saturday. I whipped the vinyl titled, Lil Ugly Mane, and gave me the scoop on why this matters. “Not only does this dude hate being popular, he’s a Richmond-based {artist} who’s only played in New York and {Los Angeles}, despite a huge cult following here at home.” I researched the artist, only to be met with a wildfire of internet buzz surrounding his long-standing retirement in 2013, until now. 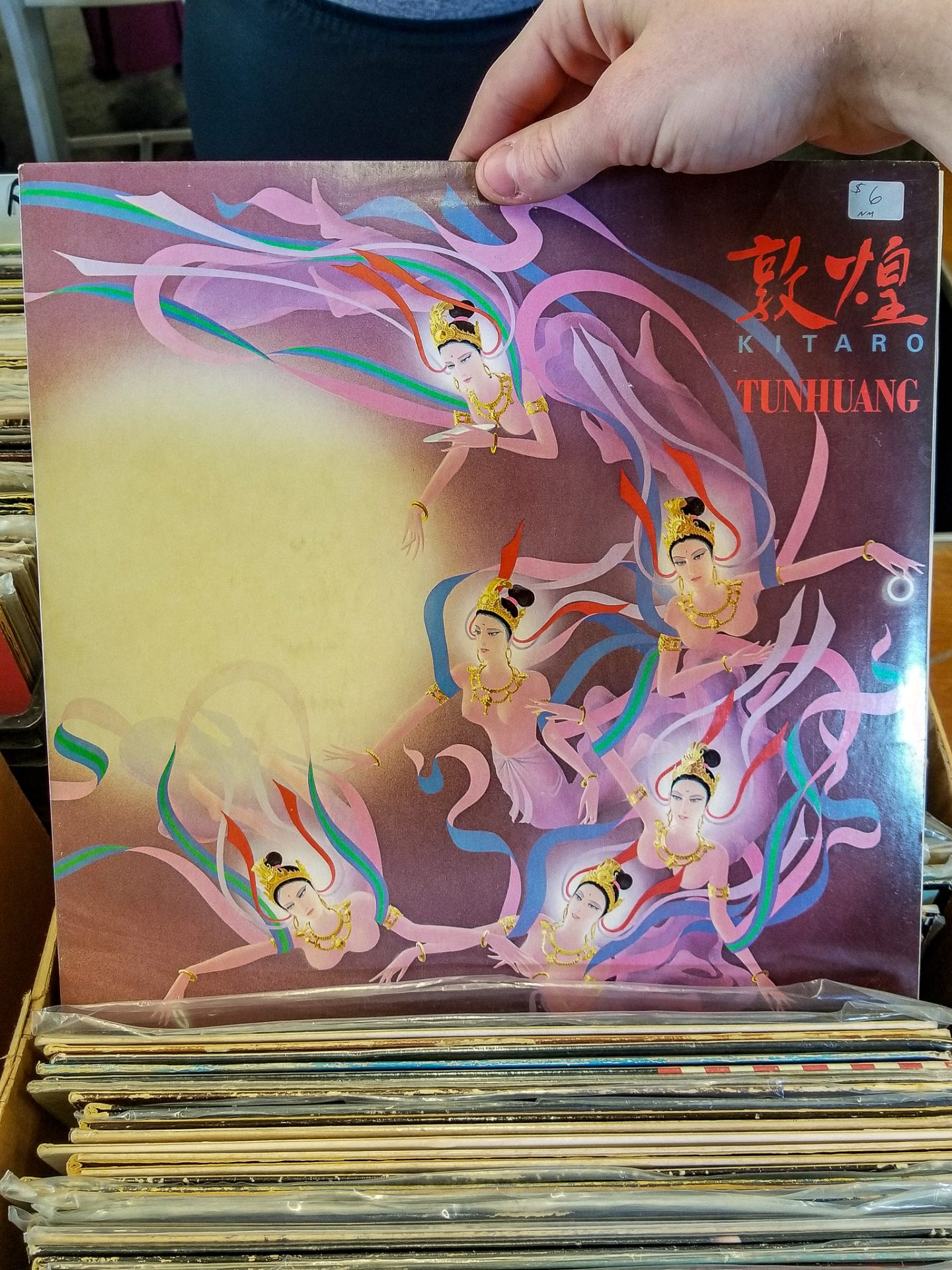 I continued to look through vinyls ranging in higher and higher prices, wondering if I should inquire on an installment plan. I approached one of the more enthusiastic scavengers, bringing his Sunday jam to midhalt to ask why this mattered so much; what makes vinyl still ‘a thing’ in a day in age where I can pull any song up on my phone with better quality and zero hassle.

“I love music man, I mean this stuff used to be so much more back then; everything from the cover you get to hold to the artwork- it’s a story into the mind of the artist,” said one avid vinyl collector perusing the records with his headphones on. Whether vinyl is better or simply different in experience, who really knows. At the very least, vinyls can be used for more than novelty decor, or not- after all, they have been consigned to the trash heap of history once before. Even within a shrinking scene of physical media where DVDs are tossed out for streaming and magazines are used for kindling, the cultural significance vinyl has to offer may carry it through the test of time. After all, David Bowie and Pink Floyd will always have some starstruck 16-year old discovering it for the first time.

RVA’s Vinyl Conflict and Steady Sounds have once again united to bring the third installment of the Richmond Record Fair this Sunday to Hardwood Park Craft Brewery.
END_OF_DOCUMENT_TOKEN_TO_BE_REPLACED