Richmond Ballet’s “Trio” transformed the Carpenter Theatre into three separate worlds with three remarkably presented ballets. Prior to the 2017 premiere of the “Trio,” RVA Mag was able to join the Richmond Ballet’s Company dancers as they prepared to present their repertoire to not only Richmond, but Norfolk as well. The rehearsals of “Gloria,” “Silence,” and “Journey” reflected what was executed on the main stage; the ballet master meticulously spot -checking and polishing routines for consistency and poise.

The curtain rose to “Gloria,” a choreographic interpretation of Vivaldi’s classic, and the work featured a marvelous collaboration between the Ballet, the Richmond Symphony, and the Virginia Commonwealth University Commonwealth Singers. This grandstanding, traditional ballet encompasses what dance is capable of in a multi-media digestion of artistic content. Vivaldi, a classic, would receive classical treatment within the confines of ballet, which I find boring from repetition, but this was never the case while I watched “Gloria.” The most notable performances of the piece coming from the second movement, comprised of three sets of gorgeous partnering, and the tenth movement, which featured a striking, articulated solo from Eri Nishihara. 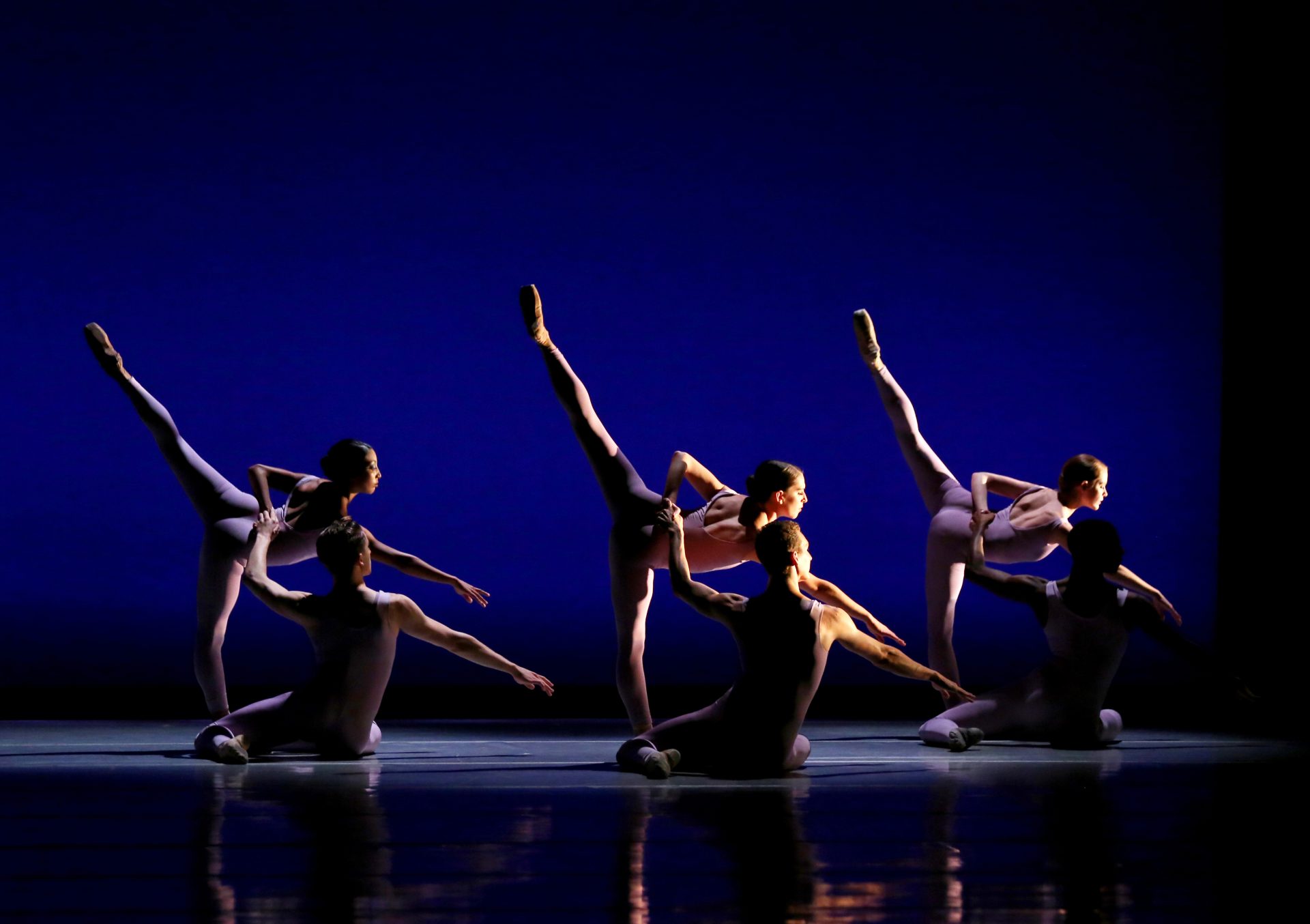 My personal favorite of the night came with the second ballet, “Silence.” Originally a smaller work that premiered at New Works, choreographer Gina Patterson was commissioned by the Ballet to travel to Richmond and fully produce the work. This is how the floating pillar came to be, as well as the walking red dress performer. But, what truly captivated my interest about the choreographic layout was the highly-occupied space of dancers in a perpetual state of redress and organic redirection. With so much occurring at once, I always knew where to look. “Silence” is an outright breathtaking pillar of contemporary ballet. Also, special kudos to Fernando Sabino and Maggie Small’s performance. 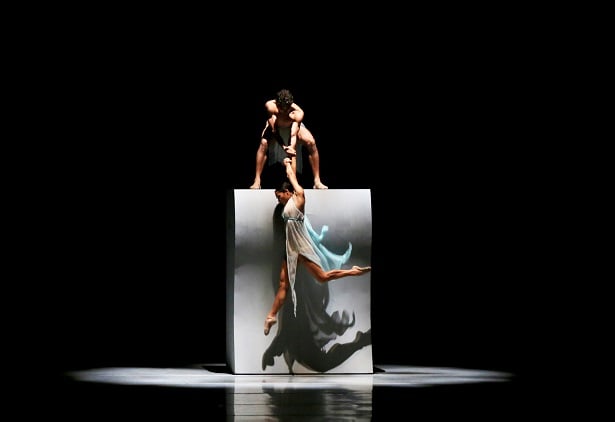 Last in the “Trio” lineup was “Journey,” a form-breaking ballet consisting of an all-male cast. No other words can describe these twelve professional male dancers besides virtuous and essential. The piece’s original choreographer, Salvatore Aiello, crafted the work to honor the male dancer, who he had believed broke a glass ceiling in the industry. Men don’t just have to lift the women, but they can be lifted themselves. The most thought-provoking quote uttered during those rehearsals rang a little like, “You’re not lifting them, you’re catching them, so they don’t fly away.” That tenderness is the point, and that tenderness received a standing ovation. 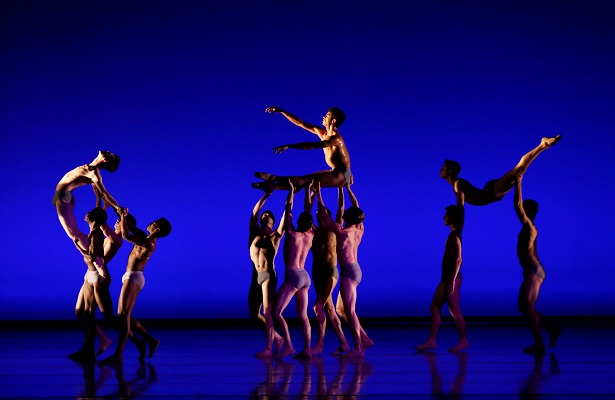 Richmond Ballet’s next performance will be “The Nutcracker,” premiering on Sat, Dec 9, at the Dominion Arts Center.

On any given Friday night, hordes of Richmond locals craving live music are rocking out to bands and moving to beats spun by locals DJs, until late, late at night — it’s pretty rare, though, to walk into Richmond bar or club and see a full orchestra on stage.

The growing classical music scene in Richmond, however, is here to change that.

“We play the same music we would play in a formal concert hall, just in a different environment,” said  Scott Dodson, Director of Patron Advancement at the Richmond Symphony. “It’s more casual, and people can talk and have a beer — although they can do that in our concert hall as well.”

The Richmond Symphony has begun a new program that encourages the integration of Richmond’s music scene by working with local bands to provide unique performances for locals.

On Friday, the symphony is teaming up with local artists like Matthew E. White, Tim Barry and Bio Ritmo performing together in an event called RVA Live! At the Carpenter Theatre.

Classical Revolution RVA, a Richmond-based collective of musicians, has a similar mission statement. 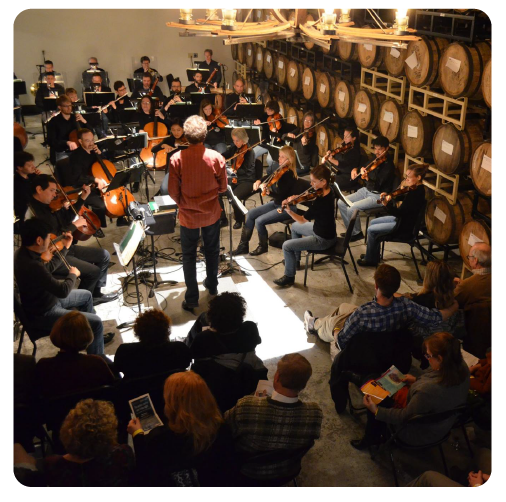 “We want to integrate classical music into Richmond’s vibrant music and art scene by taking this universal art form out of its glass case, and into Richmond’s bars, restaurants, galleries and cafes,” Ellen Cockerham Riccio, the Executive Director of Classical Revolution RVA, said.

“These are venues where Richmonders would already hear live music, usually live bands,” Riccio said. “We perform in those same spaces, where people already feel comfortable. Every five or 10 minutes, a new group will take the stage.

We find that that holds people’s attention very well. It’s very informal, so I think people like that. 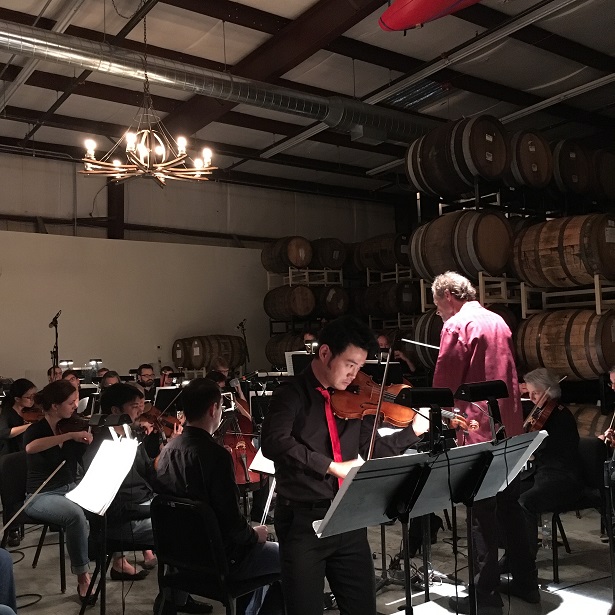 When we started, there was a lot of excitement — like, what, hearing a string quartet in a bar? Within a few months, all of our events were packed.”

The next Classical Incarnations is on Oct. 1 at 8 pm, at The Hof in Scott’s Addition. It is free and open to all ages. The Richmond Symphony has also furthered its efforts to interact with the community, with its Big Tent Initiative.

“We have this big, mobile performance space, and you can fit an entire orchestra and chorus under it,” Dodson said. “We take that around Richmond, and around to different counties. We try to perform really great music, and break down barriers, creating some kind of impact on the communities where we perform.”

Yet Dodson emphasized the frequent difficulties in breaking stereotypes when it comes to classical music.

“There’s no denying that a traditional orchestra audience tends to be older and of a certain demographic,” he said. “Still, we see a lot of different people coming to our concerts. There is a traditional feeling that orchestral music is meant to be for people wearing tuxedos, going to concert halls in the evening.”

But Dodson said that is just a perception.

“When you think about music 200 years ago, classical music as we know it now was being played in music halls as much as concert halls.”

Indeed, classical music has a long history and an important legacy. According to Dodson, much of the music we hear today is derived from music made hundreds of years ago. The Richmond Symphony was founded 60 years ago, and has been providing Richmond with music since.

Music, however, is not just about the performance — it is also about the connections it creates. Johnnia Stengall, the Assistant Director of Education and Community Engagement, first started playing the viola when she was just ten years old, and she is passionate about working with children and imparting her love of music. 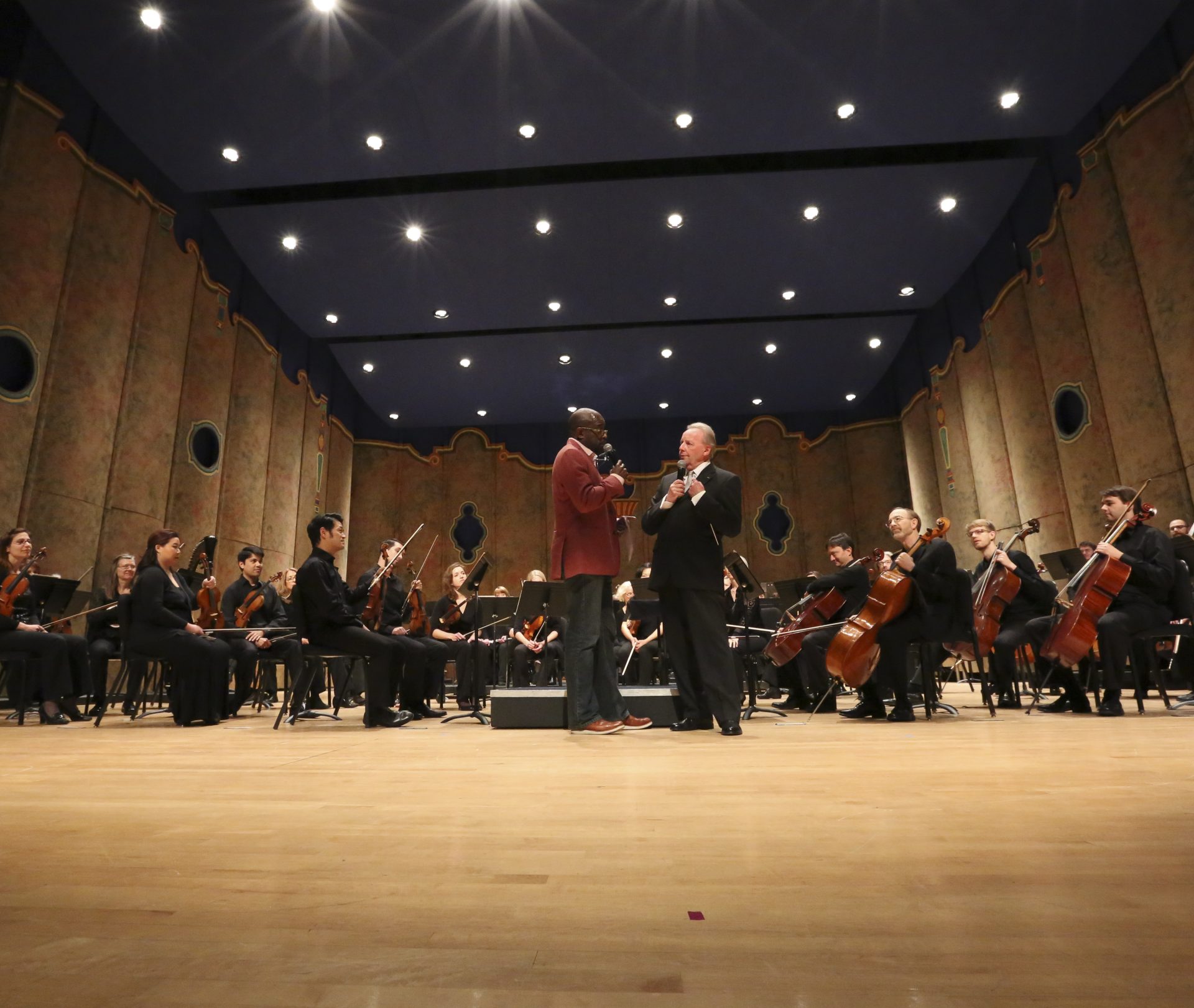 Before her time in Richmond, Stengall worked with the Baltimore Symphony’s youth orchestra.

“I worked at the Peabody Conservatory, and there were a bunch of kids that would come on the bus from West Baltimore, the rougher part of town, where the riots happened a few years ago,” she said. “Then you’d have the kids from the suburbs, who got dropped off by their parents in Escalades.

And you’d see them in rehearsal talking together about music and concerts. They were so different, and they probably would never have met otherwise. But here, they spoke the same language. I wanted to do that in Richmond, too.”

When asked why classical music is important, both groups were quick to answer: classical music has a special place in Richmond’s music scene, and is capable of moving and inspiring many. It is clear that those who work with the symphony and Classical Revolution RVA are ardently devoted to their work and their music.

“It’s a completely unique experience,” Dodson said. “There’s nothing that I can think of that creates the same sort of sound as an orchestral performance. There’s no other musical experience that resonates in the same way. You get those chills on the back of your neck, and I can’t explain what that means. In that moment, it’s the most amazing thing I’ve ever heard. “

Coccio also emphasized the uniqueness of the classical genre.

“All music is really important for us, especially classical music, because it reminds us that we’re more than our words and our thoughts,” she said. “ It expresses what words can’t, and I feel that classical music in particular really captures the moodiness of humanity. You can go from feeling upbeat to heartbroken to angry to having an epiphany — and I think that really describes us as humans.”

Some of Richmond’s finest musicians will bring their acts together for the first time on stage at Dominion Arts Center next month.

Matthew E. White,  Natalie Prass Tim Barry, Bio Ritmo, and Clair Morgan will headline RVA Live! a showcase put on by The Broadberry and Richmond Symphony designed to incorporate the musical arts of all genres and styles that represent our city’s diverse range of talent.

Orchestrations and arrangements by Trey Pollard (Spacebomb) and Marlysse Simmons and Toby Whitaker of Bio Ritmo.

To give you a little taste of what you’ll be getting, check out some info and music from the musicians below ahead of the event.

If you haven’t already, pick up indie rock group Clair Morgan’s New Lions And The Not-Good Night, which came out in May.

Beloved Richmond salsa group Bio Ritmo has entertaining us for over 20 years and they don’t seem to be slowing down anytime soon. There’s a little something for everyone with this band.

Musician and Spacebomb Records founder Matthew E. White last big release was Fresh Blood in 2015, but the local indie label has been steadily churning out solid hits and building its roster with the likes of Natalie Prass, ReSound, Georgie and Beodouine.

Songbird Natalie Prass flew her way into our hearts with her sweet sing “Birds of Prey”, a song off her self-titled debut album which dropped in 2014 via Spacebomb Records. We’ve been hooked ever since.

Many Richmonders know him as the former frontman for Avail, but Tim Barry has been churning out folk tunes solo for years now. RVA Mag last gave you the scoop on the singer/guitarist when he was releasing Lost and Rootless back in 2014, but Barry has a new record called High on 95 that will drop in September so check out the sneak peek below.

RVA Live! will be held at the Carpenter Theatre at Dominion Arts Center on Sat. Sept. 23 at 8 pm. Tickets range from $10 to $80 and can be purchased here.

The beloved story about the Boy Who Lived is coming to the Altria Theater in the near future. The soundtrack from the movie adaptation of Harry Potter and the Sorcerer’s Stone will be played by the Richmond Symphony Orchestra on February 10, as part of the Harry Potter Film Concert Series. The movie itself will play on a large screen behind the musicians for the audience to watch while the musicians play.

This concert series was started last year by Warner Bros. and CineConcerts, which has created other concert series based on other franchises, such as The Godfather and Star Trek. In 2018, the show will have been performed in over 35 countries.

“The Harry Potter film series is a once-in-a-lifetime cultural phenomenon that continues to delight millions of fans around the world,” said Justin Freer, CineConcerts president and producer and conductor of the Harry Potter Film Concert Series in a recent news release. “It is with great pleasure that we introduce for the first time ever an opportunity to experience the award-winning music scores played live by a symphony orchestra, all while the beloved film is simultaneously projected on to the big screen.”

The musical score to Harry Potter and the Sorcerer’s Stone, as well as the next two movies in the series, was composed by John Williams.  Details about the event can be found on Altria Theater’s website. Tickets range from $52.50-$82.50 go on sale at 10:00 AM on August 11 on the Altria Theater website, and can also be purchased at the Altria Theater Box Office, as well as by calling 800-514-ETIX(3849).

Harry Potter and the Sorcerer’s Stone has a run time of two hours and 39 minutes.

If you’re looking to enjoy classical music in Richmond in a more relaxed scene, look no further. Classical Revolution RVA is an organization which aims to make classical music more accessible to all by playing in local bars, cafes, and other unexpected places.