It’s a long-standing tradition at Richmond’s tattoo shops, but what makes someone wait in line for a $13 tattoo?

“It’s really about the community,” one heavily-tattooed visitor tells me. She skipped work to be here, and asks that I not include her photo or name. “I told my boss my car broke down. I thought I’d just be late, but now that I’m here I don’t want to leave.”

I’ve joined her in front of All-For-One Tattoo, next to my office, drawn by the festive atmosphere. Two blocks up Broad, patrons stand in a long line at Lucky 13; here, they get deli-counter style numbers and join a sidewalk party with cardboard cutout photo stands and giant Jenga. Others go to Grace Park for cornhole and the frisbee game Kan Jam. Many are tattoo enthusiasts who follow their favorite artists around; others are first-timers, not sure what they’ll get, and excited for their first tattoo.

For many, it was all about the price. Michael NaStall got his third tattoo, a small black widow design. “Thirteen dollar tattoo,” he responded when asked why he attended. No, it didn’t hurt, and yes, he’ll come back for the next tattoo. He enjoyed a cigarette and left by motorcycle after answering my rookie questions. 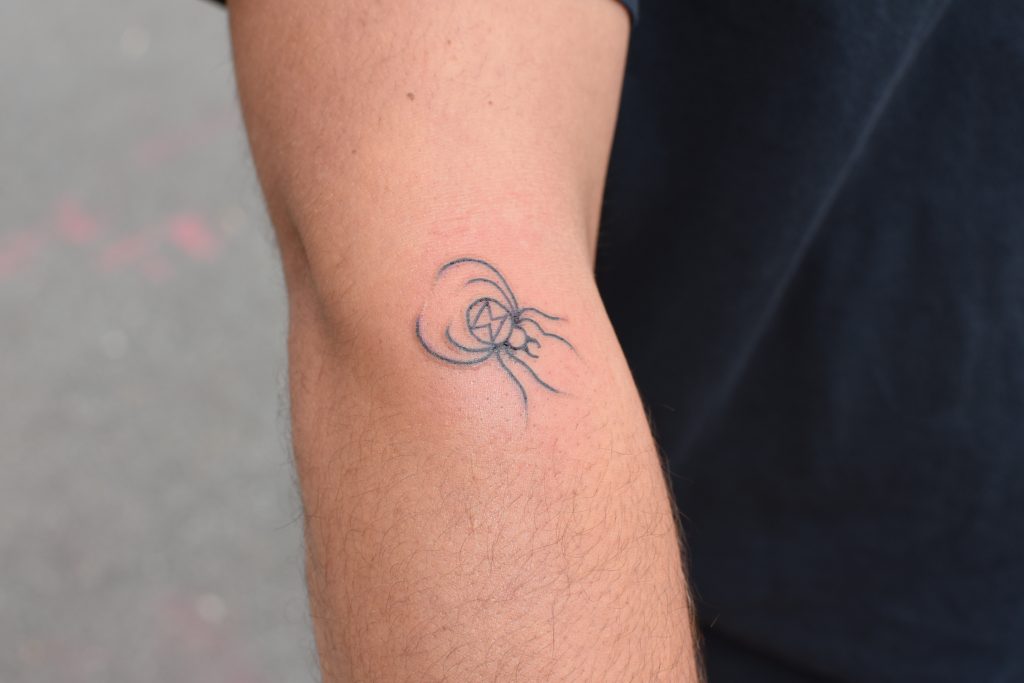 Some tattoos were almost ubiquitous; I saw many versions of a horseshoe design bearing the words “Good Luck”, either in black ink or color for $31 pre-tip.

Richmonder Billy Wisner has other tattoos, but it was his first time at this event. “I’ll be back next year,” he said, happy with a full-color horseshoe, dyed a rare dark shade of green unique to one artist at All-For-One.

Chris Ralph, a friend of the shop who volunteered for the event, let me photograph his left arm, which began with a small $13 bird tattoo several years ago, which developed into a full-sleeve.

Carson Creery added to her extensive tattoo collection. “I have 7 or 8 Friday 13 tattoos, and 27 or 28 tattoos in total,” she said, peeling back the bandage to show her new tattoos, which were two flowers and a horseshoe.

Kyle and Derrick were first-timers, brought by their friend Creery. They said the pain was unremarkable. “I expected a lot more,” said Kyle, who always wanted tattoos but described his attendance as impulsive.

“It hurt more pulling this tape off,” Derrick said, referring to the bandage covering the devil-themed comedy/tragedy mask design he received for $13. 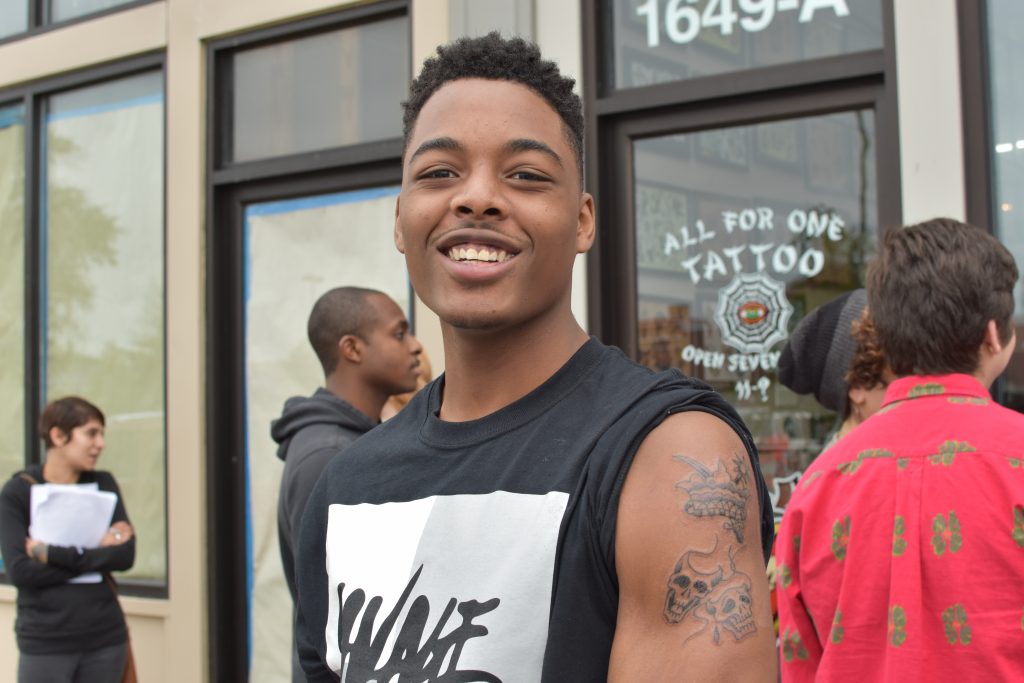 Patricia Paredes had three tattoos already, but this was her first Friday the 13th tattoo. She paid a lot more for her other flash tattoos in Northern Virginia. “I’ve never seen an event like this until I came here for VCU,” she said.  “I like the simplicity of the flash work, and it’s a good price.” 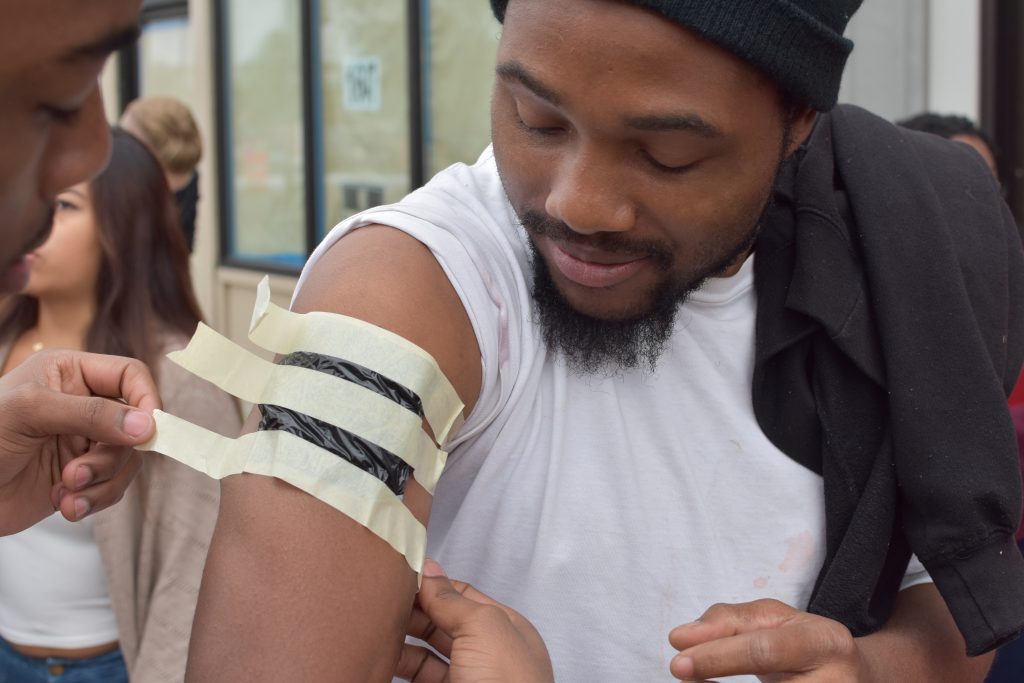 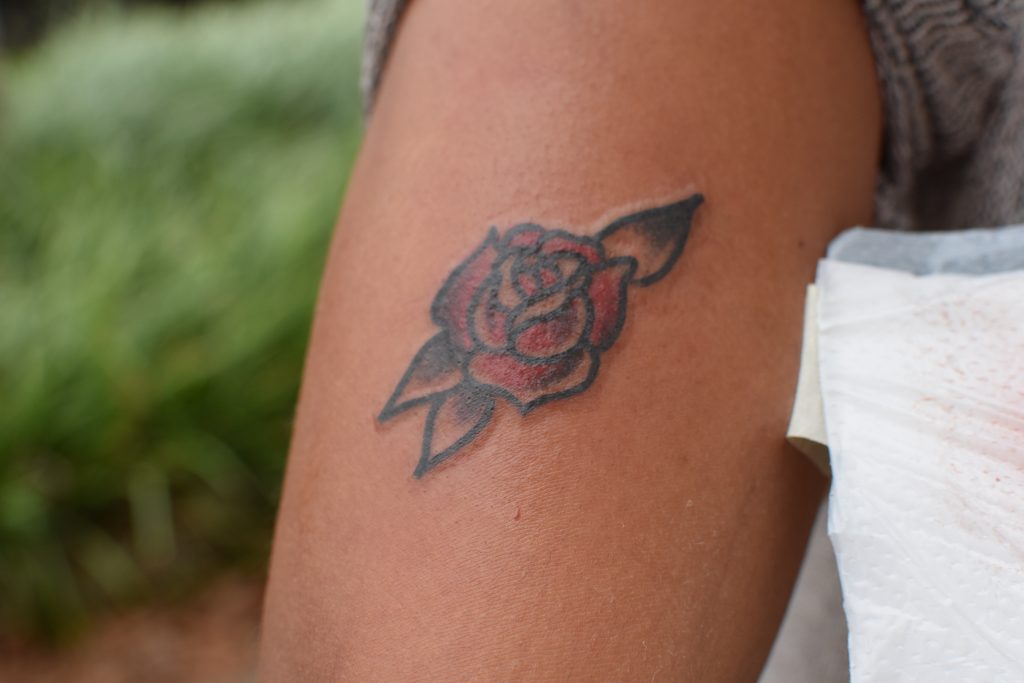 There’s a little friendly pressure at the event, with one woman refusing to let me photograph her tattoo unless I get in line too. “Don’t you think it would make your article more authentic?” she asks, citing my lack of tattoos. Although my mother has tattoos, including one to mark my birth, and my father had several, I don’t have any. I have no idea what I’d get, or where, or if I’d even like having one.

She had a good point, and if I was a little more impulsive, I would have signed up. I didn’t, but if I was going to get one, it would have been here, surrounded by this open-minded and friendly community.

Richmond, as most of you know is one of the top 5 most tattooed cities in the country – number 3 behind Las Vegas and Mia
END_OF_DOCUMENT_TOKEN_TO_BE_REPLACED