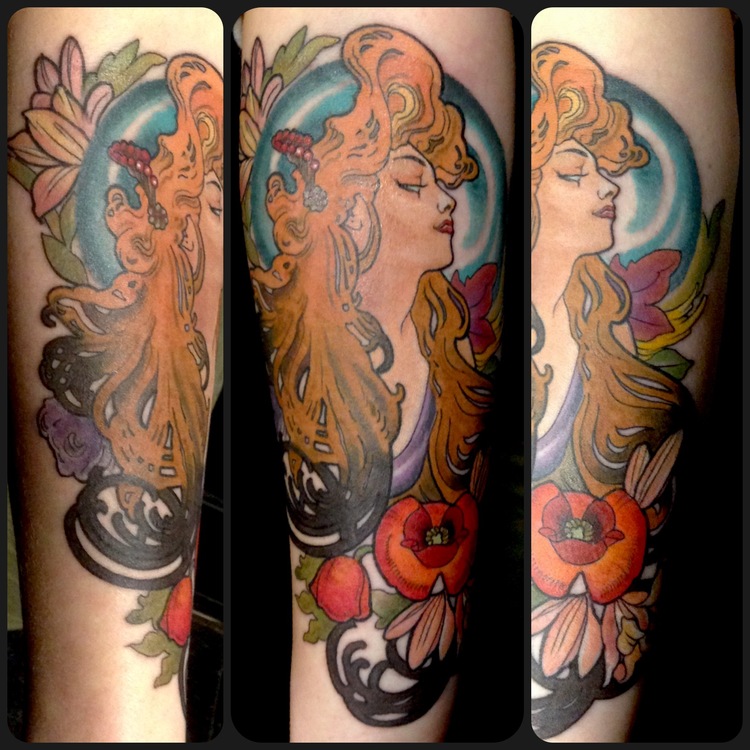 As the third most tattooed city in the US, how do you pick which RVA tattoo shop to go to and what tattoo you want?

Richmond, as most of you know is one of the top 5 most tattooed cities in the country – number 3 behind Las Vegas and Mia

Richmond, as most of you know is one of the top 5 most tattooed cities in the country – number 3 behind Las Vegas and Miami. If you want to get a tattoo in this city, there’s literally a shop within a two minute walk from wherever you are.

There is a vast amount of talented tattoo artists and renowned shops to choose from, and they all have their own unique styles.

So how do you decide which shop to go to?

Since a tattoo is a permanent piece of art on your body, it’s wise to do a lot of research and think extensively about what you want before going out and getting it done.

You don’t want to make a huge mistake, so figure out the style and roughly what you want beforehand.

Do you want it to look old school, realistic, colorful, traditional or new school animation?

Any style or type you could possibly want, you can find here in this city.

I asked some of the talented artists around the city about their perception on the art of tattooing and about their own styles of tattooing: Mitchell Canter at Heroes & Ghosts, Brian Bruno at Absolute Art, and Katie Davis at Salvation Tattoo.

Canter just started tattooing at Heroes & Ghosts about a month ago. He had been on the road on and off for two years traveling with the infamous Bam Margera. He met Margera when he was 18-years-old at a show after he had asked him to help with his camera. Now Canter is the guy that tattoos all of the wild stuff on Bam and his crew.

“Tattooing, I guess I’m more of a black and gray guy, but I also do a lot of color too. If you sum it up, mainly it’s details, whether it’s color or black and gray,” said Canter. “It drives me crazy not to have all the little details and textures.”

His style is very realistic and he spends a great deal of time on each piece because he wants them to be the best they can be.

Canter has previously worked at 212 Tattoo and Speakeasy Tattoo which he called ‘party shops’. Both have recently closed down.

“I’ve always been kind of at party shops, but I take it too seriously,” said Canter. “I found [Heroes & Ghosts] and everyone here has families and is really into it, so I was like okay this where I need to be.”

There are seven artists at Heroes & Ghosts and each one takes their work seriously. That’s kind of the mantra of the shop but there is no specific style that they all have.

Each one does their own thing.

“If I don’t feel comfortable doing it, there’s someone upstairs that can,” said Canter. “That’s what I really like about this place one of us can get it done.”

So once you’ve found a shop, then it’s good to look into the artists at the shop to see which one most fits what you’re looking for.

Brian Bruno of Absolute Art has been tattooing there since 2006. He started tattooing in Gloucester, a province in Hampton Roads. At that time, tattooing was illegal in Virginia Beach, Norfolk, and all of Hampton Roads, except for Gloucester.

This was largely in part, due to Norfolk being a huge sailor town back in the late 40’s and early 50’s. It was made illegal in the 50’s in an effort to try to clean up the city, only becoming legal in Hampton Roads around 2001. It was even illegal for a while in New York City. Now tattooing is more popular than ever.

“I do mostly traditional Japanese style and traditional American style tattooing,” he said.

He is currently helping out the VMFA with their upcoming ‘Japanese Tattoo: Perseverance, Art, and Tradition’ exhibition starting on May 29th. The exhibit is about Japanese body suit tattooing, which pretty much means completely covered in tats.

It’ll feature several artists, their work, and some tattooing tools.

Bruno is doing the art for their advertising and a t-shirt design for them.

The mantra at Absolute Art is always doing tattoos that wear well with age. They all have their own different ways of tattooing, but they all make sure their work will last.

Basically overtime, most color will fade away. So it’s important to have the black because that’s all that will last with age.

“If you see an old man at the grocery store with a rose [with an outline] on his arm you can still tell it’s a rose,” said Bruno. “If you have a tattoo without black shading or outlines, it’s just gone or looks like a birthmark.”

If you go to Absolute Art, you can expect to get a tattoo that will stick with you through the ages. They also make sure to educate their clients about the process and to treat them respectfully.

Another cool shop is Salvation Tattoo Gallery. Tattoo artists/husband & wife, Katie Davis and Fred Picknard opened the shop together 11 years ago. Davis started working in a shop at the age of 16, worked her way through an apprenticeship and started tattooing at the age of 20.

“I do a lot of flowers, animals, illustrative, lots of color, things that I love,” said Davis.

“We have a gentleman here who does old school traditional. It sort of looks like it came from the 50’s or the 60’s,” said Davis. “Then there’s another guy who does somewhat traditional tattoos, some of his stuff looks like it’s from the 70’s.”

They like to go through a detailed process with their clients: Let them look through the artist’s portfolios, figure which artist fits what they want, then they have a meeting with the artist, discuss their ideas and make an appointment.

Other notable shops are Loose Screw Tattoo which they do a new school animation style that’s popular out in Southern California. And of course River City Tattoo; the list goes on and on.

One thing that each artist can say is that they respect the many artists around the city and they admire all the work that they do.

So when you’re thinking of getting a tattoo, really look into the different shops and figure out which shop fits the style you want. Then from there, look at the different artists or even just start by looking at particular artists. It’s best to do your research before just jumping into it and going to any given shop.

If you want an awesome/nicely done tattoo, you’re in the right city.