I am a sexual assault survivor. The @RTDOpinions cartoon is harmful to the 1 in 3 women who experience sexual violence & shows why women fear speaking up. News & opinions are separate departments. But these are facts. That being said, today is my last day at the RTD. pic.twitter.com/QA1Bv1ZOXq

“I am a sexual assault survivor. The @RTDOpinions cartoon is harmful to the 1 in 3 women who experience sexual violence & shows why women fear speaking up. News & opinions are separate departments. But these are facts. That being said, today is my last day at the RTD.”

The Times-Dispatch lost several employees to the new Virginia Mercury outlet, and has been the subject of criticism over its editorial board. In the middle of a city that leans heavily Democratic, the editorial board has telegraphed increasingly conservative positions; it was one of the few in the nation that didn’t endorse Hillary Clinton in the 2016 presidential race, and recently ran a cartoon that even Mayor Levar Stoney criticized for mocking immigrant children. 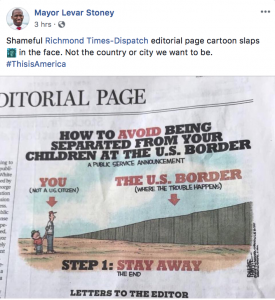 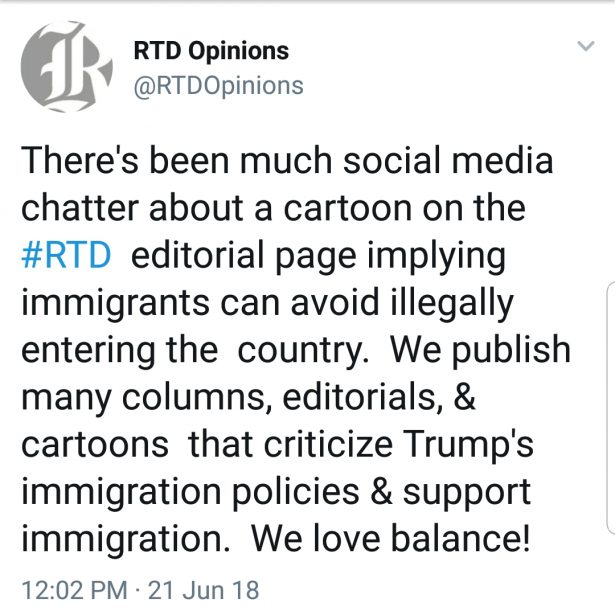 Mark Holmberg’s most recent editorial, Mayor’s narrative about Monument Avenue ‘not the whole truth,’ proves he is woefully out of touch with the current conversation.

For starters, let me say this: Reducing this city’s ignoble history to a series of blatant generalizations and clichés is not only naive, but highly dangerous. We now live in a politically charged time where the debate over Confederate symbols is driving the next generation of white supremacy, white nationalism, and alt-right ideology.

This fact cannot be removed from the ongoing debate surrounding the future of our very visible and highly contentious Confederate statues. And our public voices, Holmberg included, have a responsibility to engage in the nuance of this debate and not cast lazy aspersions against Mayor Stoney.

Why is this important?

Because Holmberg’s inability to fully understand this issue or be curious about the direction of this debate highlights why Stoney’s commission is so needed. This is not a hard conclusion to arrive at, not when the opening salvo in his audacious opinion piece states: “Denouncing the ‘false narrative’ of the Confederate monuments on Richmond’s Monument Avenue on Thursday, Richmond Mayor Levar Stoney proceeded to dish up his own stony narrative of our world-famous avenue while announcing a commission to write the correct one.”

Implying what Stoney said was incorrect by putting “false narrative” in quotations (twice) and connecting it to language like “dish up his own stony narrative” only serves to seed doubt about what the conflict between the states was actually about — slavery. Is there another narrative which needs exploring when evaluating the prominence of a Jefferson Davis statue on Monument Avenue or the purpose it serves in 2017?

To suggest anything to the contrary is to provide fertile ground for narratives being advanced by white nationalist groups throughout Virginia. Look no further than the endless rallies being held in Charlottesville over the removal of a Robert E. Lee statue. This is where being woefully out of touch with the current conversation becomes so detrimental to the conversation this city needs to have with itself, especially over racial issues.

Holmberg then digs in further by saying: “No doubt, the mayor’s personal narrative about Monument Avenue is partially rooted in fact. But it’s not the whole truth.”

Yet in the end, Holmberg offers no real facts or suggestions that might give the people of Richmond a new perspective. Instead, he takes readers on a prattle-fueled journey into the mindset of an aging demographic long past its prime. One that quickly dismisses what is important to people of color, our current generation, and younger politicians who are seeking solutions to complex issues, not just deferring to the status quo under the pretense that Monument Ave is “world-famous.”

And what little “facts” he does provide are about Commodore Matthew Fontaine Maury, who’s nom de guerre, “Pathfinder of the Seas,” sits on the corner of Monument and Belmont. However, this is little more than a bait and switch, a way to detract from the more imperious statues of Davis, Lee, Jackson, and Stuart. Are we to expect a sweet missive from Holmberg on the contributions made by Jefferson Davis next?

He continues: “The man who charted ocean currents and winds, a tireless researcher and author whose work in several fields before and after the war profoundly changed the world.”

But here is the simple truth: The men on Monument Avenue led an insurgent rebellion against the United States for the purposes of keeping human beings enslaved. This is not changed by the fact that Maury pioneered some naval and oceanic research, nor should Holmberg be referring to him as a “heroic scientist,” given the war crimes and moral bankruptcy of the Southern cause.

To do so, once again, suggests a version of history that lacks context and dismisses the modern conditions in which these statues exist. This is precisely why Stoney’s speech was delivered the way it was. Furthermore, Holmberg is not really sincere about seeking historical clarity. He is sincere about preserving the look and feel of Richmond’s antebellum and postbellum past, which is important to people who don’t have to be reminded about symbols celebrating their own oppression.

“I just wish the mayor had introduced this complex and controversial effort to correct the ‘false narrative’ with more grace instead of a stony and blanket condemnation of the many people who helped make Monument Avenue one of the most architecturally acclaimed streets in the world,” said Holmberg in conclusion.

Holmberg would do well to reserve some of his indignation for the lack of equal representation of African American history on Monument Avenue and leave the architectural acclaim to architectural critics. Until all of our history is elevated to equal prominence any real conversation about Confederate symbols made by people seeking to preserve the status quo is disingenuous at best — and racist at worst.

Perhaps the Richmond Times should implement a commission to study the context surrounding Mark Holmberg, because I can assure you, much like our Confederate statues, he is losing relevance.

Say what you want about the Richmond Times dispatch, they are the only folks in town with a consistent daily news staff not forced to condense things into a 45 second video and there’s something to be
END_OF_DOCUMENT_TOKEN_TO_BE_REPLACED