On Feb. 16, Deborah Walker, 55, and her daughter Shaquenda Walker, 24, were shot and killed in their home on Coalter Street.

On March 29, a triple shooting in Jackson Ward left Mikkaisha Smoot, 16, and Taliek Brown, 15, dead after both were taken off life support at VCU Medical Center.

And on April 10, Kejuan Goode, 18, and Terrell Thomas, 20, were shot and killed in South Richmond.

“This seems to be once again a senseless act, but something that’s not random,” Mayor Levar Stoney said at the crime scene at the Walker home. “It seems very isolated, like some of the acts that happened in the past.”

So far in 2017, Richmond has had 20 homicides. During the corresponding period of 2016, there were 23 homicides. That is a worrisome trend, because 2016 was the deadliest year in Richmond in a decade: The city ended the year with 60 murders.

Crime overall is up this year, according to the Richmond Police Department’s Crime Incident Information Center. Through April 30, Richmond police received reports of more than 11,000 violent crimes and property crimes. That’s 1,000 more than during the corresponding period of last year. 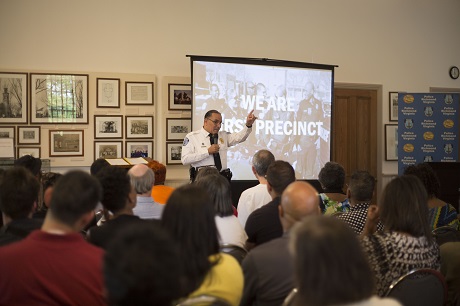 Gun violence was a key topic at recent forums held throughout the city by the Richmond Police Department. Such town halls have become an annual tradition for the department since Durham became chief in 2015. But this year’s forums had a specific focus: What is causing an increase in crime in Richmond – and what can the community do to help?

More than 100 people attended the first forum at the Southside Plaza Community Center on April 18 to express frustration with the spike in crime. At that point, Richmond had seen 1,432 violent crimes so far in 2017 – 39 more than during the same period last year, according to the department’s Crime Incident Information Center.

Despite the numbers, Durham assured the crowd that crime is “not out of control.” However, this was a tough bit to sell to Karen Norwood, whose 30-year-old daughter Noony was shot and killed on Hull Street on Nov. 6 and died nine hours later at a nearby hospital. Noony was an African-American transgender woman — the 21st trans person reported to be killed in America last year, according to the Human Rights Campaign, an LGBT civil rights advocacy group.

Norwood said she has been in touch with police, but no new developments have come to light despite surveillance cameras near the crime scene. “There’s cameras out there, but the images on the camera – they can’t see it because it’s too dark for them to see it,” she said.
Durham stood by his word at the final town hall of the season on April 27. He said crime across the city is not out of control; rather, certain neighborhoods have seen a “significant increase” in crime – especially in East Richmond, public housing communities and several communities in Southside.

“We know where the crime is,” Durham said.

He proceeded to go through a detailed presentation including crime statistics, the proliferation of firearms in the city, department staffing levels and how the community can help.

The first slide cited statistics that the department sends the FBI for its Uniform Crime Report, which is divided into two categories: violent crime and property crimes. Violent crimes include murder, rape, robbery and aggravated assault. Property crimes, which are more common, range from shoplifting to burglary, larceny theft, motor vehicle theft and arson.

“We have been concentrating our efforts on these areas because we know where the violent crime is committed,” Durham said. “Crime is not out of control. But we do have violent crime in this city, and we have a small population of folks committing those criminal acts.”

He emphasized the need for “transparency” between community members and the police department in improving public safety.

“We can’t do our job if we don’t know your expectations of your police department,” Durham said. “We are having some challenges this year, but the most important keys on how we’re going to resolve those issues are sitting right in this room.”

Durham said crime can be difficult to manage because the department is understaffed. It is authorized to have 750 sworn officers but has only 688, including cadet recruits who don’t graduate from the academy until this summer.

The Second Precinct in South Richmond is short 13 officers alone.

“How do we make up for that?” Durham said. “Through minimal staffing overtime. When we’re making them work, they get burned out.”

Crime rates are increasing outside of Richmond as well. According to the Major Cities Chiefs Association, which collected data from 61 metropolitan police agencies, U.S. cities saw 6,407 homicides in 2016 – an 11 percent increase from the year before. Dallas, Las Vegas and Phoenix – as well as Louisville, Kentucky; Memphis, Tennessee; and San Jose, California – all saw rises in killings in 2016.

Smaller cities that typically have low murder rates saw a jump as well, including Arlington, Texas, which had four homicides in 2015 but 18 in 2016, and Salt Lake City, which had six in 2015 compared with 14 last year.

The FBI has not yet released 2016 crime statistics for all of the nation’s cities and states. However, even before the 2016 spike in homicides, Richmond compared poorly to other cities.

Of the 290 U.S. cities with at least 100,000 people, Richmond ranked 20th in the murder rate in 2015 and had the highest murder rate of all large cities in Virginia. Norfolk, which has a slightly larger population than Richmond, had 28 murders in 2015.

Meantime, the chief is asking the community to partner with him and his department, reminding residents that his officers do all they can to keep the city safe. But at the end of the day, “we all play a role.”

“Police are the only people in society paid to do public safety, but public safety is a shared responsibility,” Durham said. “What more can we do?”

Some community members are already doing their part. Carolyn Johnson, president of the McGuire Civic Association, said she has been dubbed president of the “Snitch Club” in her neighborhood. She encourages others to take photos if they witness crime and call the police directly – not 911 – when reporting wrongdoers.

“This is my block, and I’m taking it back,” she said at the first forum on April 18.
Charles Wes, another town hall attendee, said he would like to form a coalition of people who want to get youths involved in activities like recreation leagues and community events to keep them off the streets. His suggestion was met by loud applause; Nicole Fields suggested that the forum attendees come up with activities themselves.

Such community involvement is what the police need, the mayor said.

“We have an awesome department … And although they are great, they are not superheroes,” Stoney said. “They will tell you they are only better with better neighbors and citizens. They’re great because of you all.”

Words by By Maura Mazurowski via VCU Capital News Service

Just in from RPD – keep your eyes peeled, Church Hill –

END_OF_DOCUMENT_TOKEN_TO_BE_REPLACED

Just in from RPD – this guy sounds like a real dick, keep your eyes peeled.
—-