A blinking neon light hanging on a dingy building near South of the Border in South Carolina flashing the words “Girls, Girls, Girls!,” would conjure up some negative images for most women, but ended up being inspiration for Emily Herr’s latest project.

“It was so weird to see that, so sad, out in the middle of nowhere at South of the Border,” the RVA muralist said. “But if you don’t really have anything to do with that world, or if you don’t really think about it, and take it out of context, it’s so happy…and I just loved that.”

Since June, Herr, of Herr Suite, has been painting Richmond women all around the city in small scale murals on houses, businesses, and public spaces, in an effort to change media depictions of women as one-dimensional objects and one beauty standard. 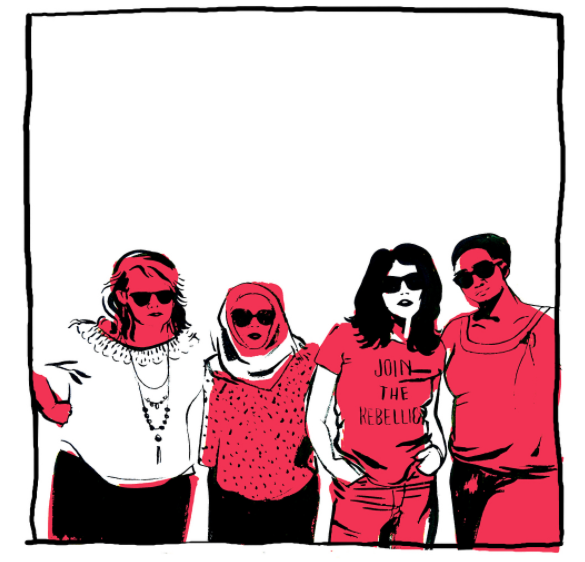 Tomorrow, Herr, along with Sarah Apple of Lucky Signs RVA, will roll out in their multi-colored mobile art studio truck to embark on their “Girls! Girls! Girls!” tour to paint murals of as many real, everyday women as they can up the East Coast all the way to Burlington, Vermont.

“We have a partner who is going to let us paint the back of his thrift stop and the building next door and do the same sort of thing as the Sheppard and Broad Street one; take a bunch of images of local women and interweave it with the whole Girls! Girls! Girls! thing,” Herr said. “The goal is on the way up, we’ll be propositioning people on the way up to try to as much as we can.”

Herr, a 2013 VCUarts graduate, has been painting murals for over nine years and done work for local businesses such as Sugar & Twine, Welcoming Walls, Gather on Broad, and Halcyon Vintage.

In January, she began the mission of her “Girls Girls Girls” motif with a mural of neon-colored women of all races, ages and shapes on Sheppard and Broad streets with the words “Girls Girls Girls” painted boldly across the wall. The artist’s goal is to steer away from the stereotypical depiction of a woman in a magazine, ad, or even fine art in some cases. “There’s images of women everywhere all though advertising, that’s talked about a fair amount, ‘advertising fucks up body image’, but also art,” she said. “Fine art is very ‘oh the beauty of the female form’ and that’s an excuse for a piece of art and you don’t see that with male bodies. “

“You also don’t see that with all these other kinds of bodies, it’s not ‘oh the beauty of the female form’ if she’s 50 pounds overweight…so that’s bullshit and the art world definitely hides behind that.”

For her Sheppard and Broad mural, Herr put a call out on Facebook for pictures of everyday women that people love and want to see reflected just the way they are.

“That’s my goal is to show real actual women and everything that entails, you’re not perfectly groomed, you’re not necessarily happy, not necessarily sexy, and then also, better representation of people of different body types, different races and skin colors and also, ages and disabilities is what I would love to move this towards,” she said. 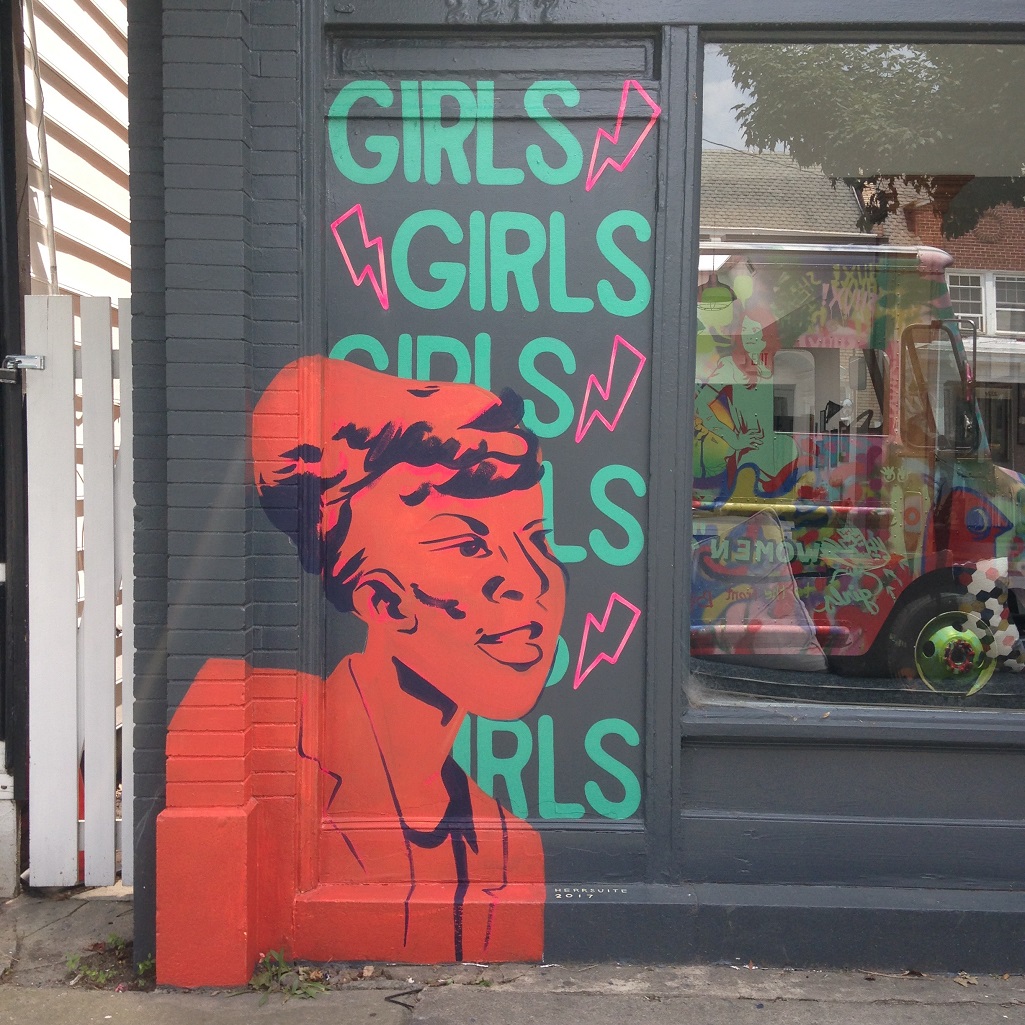 Coming from an illustration background, Herr said it was important for her, as well as other female artists, to reflect diversity in their work.

“There’s a huge push from female illustrators to make better representation of everybody in their work, like, be more conscious about who you’re drawing and when, and don’t just use your default body types and lifestyles,” she said.

With this tour, Herr has put out another call for pictures of women pushing for more diversity.

“I want you to be honest, I want you to send me a picture of somebody you know and you think is a cool person,” Herr said. 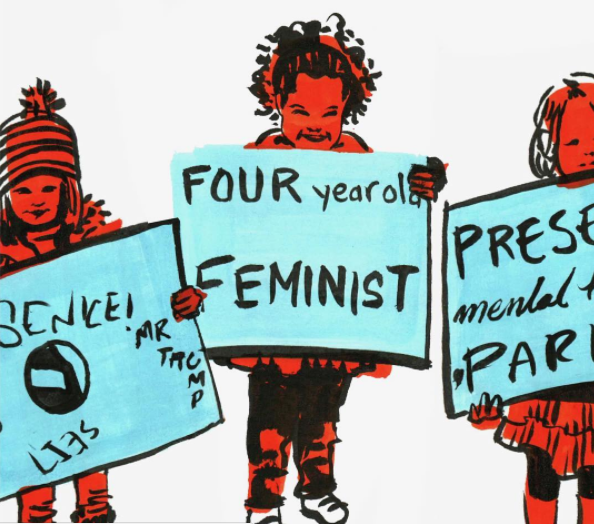 “I’m hoping for this to be ongoing…like I guess I imagine the tour being perpetual,” she said. “I would hope to paint murals that make people appreciate the actual humans around them a little bit more, see them in a new way, that’s what I’m working towards.”

When Ed Trask first began painting murals on the sides of buildings in the 90s, it was technically vandalism, but now he is among many local artists who actually get commissioned to adorn a building with artwork. More presently, Trask’s work will be displayed in an exhibit at the Glave Kocen Gallery starting tomorrow.

Trask explained inspiration for the exhibit, “A return to mind of glint and glimmer”, resulted from coping with winter-time blues and the stress of his aging parents who are experiencing short-term memory loss.

One piece in the exhibit will be a large painting of a buzzard with flowers on the other side. The buzzard is associated with death and the flowers are meant to symbolize life. Trask cited inspiration came from visiting his mother on a good day as her garden had also bloomed with the changing of the season.

A lot of the exhibit will also feature identifiable landscapes around Richmond which Trask noted helped him cope.

“The only way to get out of this is to find the things that I think just bring love and light to me,” Trask said. “Fortunately a lot of it is [painting] different places around our city. So that’s what the show is about. It’s about finding a way to get back to that place of love, light and optimism.”

“That kind of sounds real hippified,” he followed up with a laugh.

But optimism is a theme that has been laced throughout a lot of Trask’s work.

In his earlier days as an artist, he wasn’t scoring gallery gigs and he had to find ways to force his work into the public eye. In his senior year of college at Virginia Commonwealth University, Trask began painting derelict buildings around Richmond.

“When I first started doing the illegal work, there were so many dilapidated buildings that were just seemingly rotting, so I started looking at these buildings as great canvasses,” Trask said. “In a way it was like a beacon to these buildings. Like, this should be a coffee shop or something should happen here.”

Trask explained that abandoned buildings hold potential to be something new.

“Neighborhoods deserve to have a sense of optimism that I think can only come from color and something creative of that nature,” Trask said.

Trask eventually joined a band and they toured around the United States and Europe where Trask continued to leave a painting in many of the cities he visited. He painted in cities like Washington D.C., San Francisco, Amsterdam and Berlin.

Berlin was an inspiring place for Trask. His first visit was in 1991, just shortly after East and West Germany had reunited into one democracy. At this time parts of the Berlin wall were still standing and Trask could see the art on them. Berlin also contains many buildings with murals and graffiti.

“It was really cool and it started to make me realize that this kind of art can be used for so many things,” Trask said. “It can be a beacon for change, but also it can be an immediate political statement. It starts conversations.”

Trask explained that the very fact that artwork can spark various conversations is very important to him.

In recent years he has been part of the organizational efforts behind the RVA Street Art Festival. The annual event showcases local talent, brings in outside talent and helps revitalize desolate parts of the city.

After volunteering to work with a group of people on a mural in Brazil for three weeks, Trask became inspired to apply some community engagement to things back home.

“Mural painting can be so ego-driven, but everything I wanted to do after that mural had to be community driven, and had to have something that gave back,” he said.

The festival which began as a passion project between Trask and city councilman Jon Baliles, has evolved into a non-profit organization whose proceeds go towards other art-based charities in Richmond.

Ed Trask’s exhibit will be on display at Glave Kocen Gallery from May 12 to June 3. The opening night reception will take place from 6 to 8 p.m on Friday.

With a tight public school budget, Linwood Holton Elementary art teacher Sarah Fought resorted to GoFundMe to finance a mural in the entrance rotunda of the Northside school with the hopes of brightening its atmosphere.
END_OF_DOCUMENT_TOKEN_TO_BE_REPLACED

In his first solo exhibition at Gallery5, Richmond muralist Mickael Broth will kick off RVA First Fridays with his show “Signal Flare” in a collection of abstract art inspired by illumination and fire.
END_OF_DOCUMENT_TOKEN_TO_BE_REPLACED