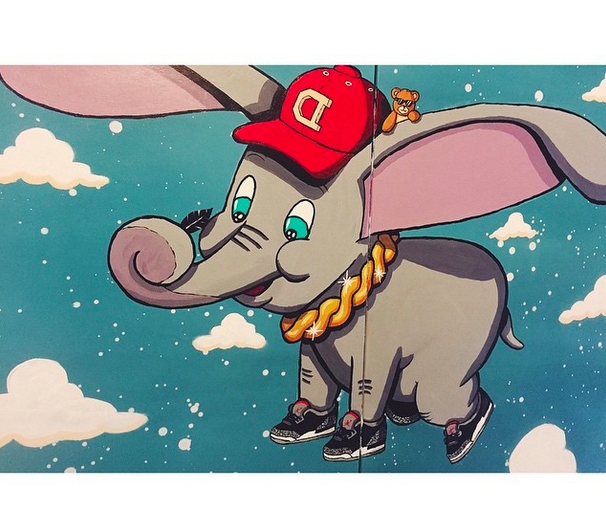 That name isn’t actually his real name (you may also know him as Zack Morris, though he was never on Saved By The Bell), but it’s a tough name to forget once you see the artwork he’s been producing.From his mural inside High Point Gallery (below) to his work as creative director for up-and-coming clothing brand Chilalay, Earl Mack has a lot going on right now, and if his plans come to fruition, 2015 will be the year that everyone in RVA (and beyond) gets familiar with his work. 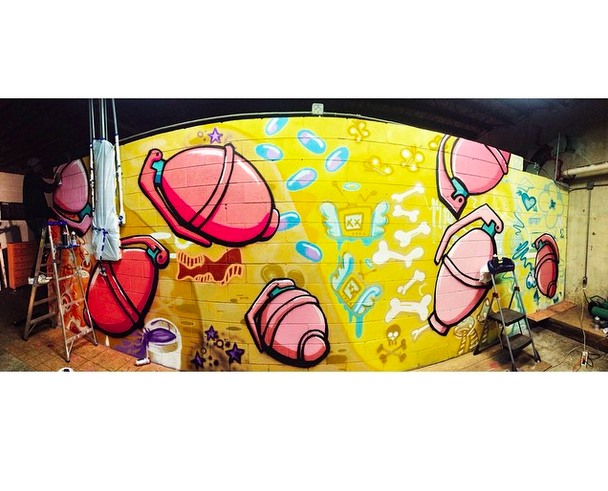 How did you end up in RVA?

I went to VCU. I was in the art school. So I’ve been here ever since 2008; graduated

What made you want to stay here?

I just liked the art scene. I’m kind of still debating whether or not I wanna go back to school, and there’s been work opportunities here, so I stayed. And it’s not too far from my parents, but not too close either. So if they need me I can be there, but I’m still far enough away I can do my own thing.

Were you a designer or an illustrator first?

Illustrator, always. I’ve always been drawing and sketching. I wanted to go to the comm. arts illustrating program at VCU but I didn’t get into it. I wound up being in a sculpture program. I didn’t really want to be at VCU at first because sculpture is not what I wanted to do. I wanted to do graphic design–like the cool side of art. But sculpture turned out to be pretty sweet. I didn’t know it was the #1 sculpture program in the nation. And then my advisor was like, “Well, there’s sculpture and extended media. If you don’t really wanna do a lot of sculpture you can play with the extended media side. You pretty much have free rein to do whatever you want.” And that’s what kept me in school, because I didn’t enjoy sculpture all that much until the end.

What have you been doing since graduating in 2012?

Always making art, that’s a given. I’ve been doing a lot more designing for clothes, logos, web design for other companies… I have my own clothing brand called Chilalay and we were in RVA Fashion Week [in Spring 2014]. I’m the creative director for the brand, so I’m always trying to come up with new concepts for the clothes, and trying to come up with new ways to market our brand. We’ve done a few pop-up shops and pop-up galleries, and had pretty big turnouts that gave us our buzz to start off with. The first thing we did, we didn’t drop a line, we just did a dope event. From there we started building clothes around these events and doing cool stuff throughout the city. That’s how our brand has been; we put out clothes but we’re definitely trying to do a lot more stuff culturally than just clothing. 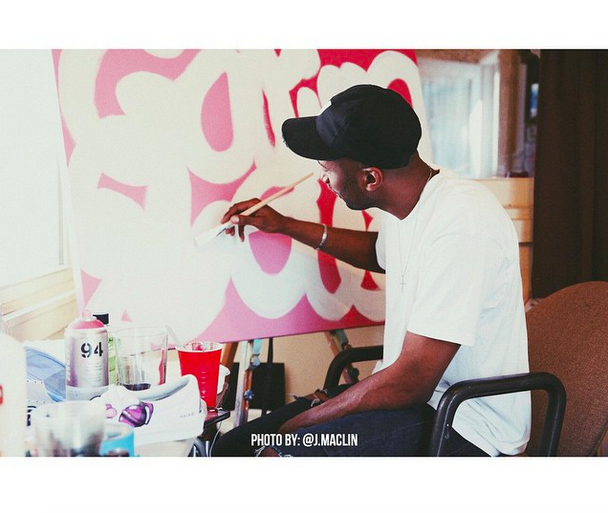 So the brand’s more a cultural brand than just a t-shirt thing.

Yeah, we’re trying to get the culture definitely involved with the brand, through clothes but also through art style. With the culture being art shows, or hip hop shows, or fashion events. Just trying to be well rounded in a lot of different areas.

For people that haven’t seen your art, how would you explain it, or your style in general?

Vibrant colors; I like strong black lines. Definitely grew up a comic kid; I love DC Comics, so that’s always what I was sketching and drawing. Now that I’m older, I’m kind of going back to those same roots, but I’m putting my own spin on it, doing faces and objects that are really vibrant. Kind of pop art in a way, stuff that’s relevant–and if it isn’t relevant I just put a spin on it to make it kind of relevant. I haven’t done too much political work, because fuck politics. It’s more just shit that I’m interested in, like fashion, women, having a good time… Robots and skateboards.

There are a lot of repeated objects in your art. There’s one with cigarettes bent up–I thought that was dope. And then I saw one with grenades repeated. The cigarettes was… you know, RVA was pretty much founded on tobacco. It’s a huge tobacco city. You’re always gonna see someone smoking cigarettes and its always something that brings people together, like “Oh, you got a cig I can bum?” and the next thing you know, we’re having a conversation and hanging out or whatever. So it kind of brings people together, but it also tears people apart, because of cancer. 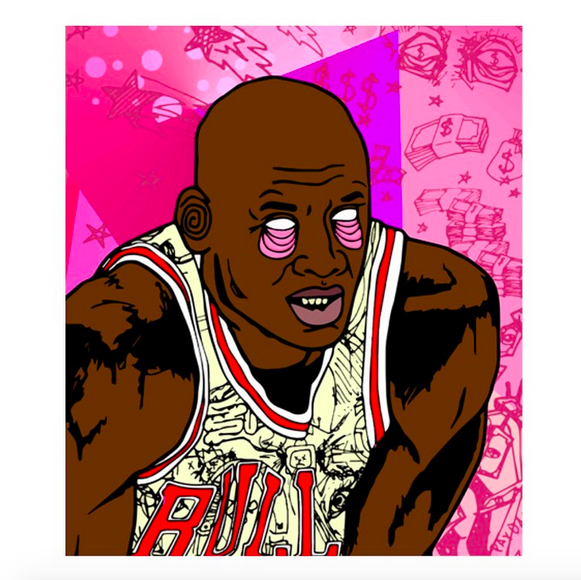 So it’s a double-edged sword?

I met you at Fashion Week, but then I worked with you on the Richmond Mural Project… have you been doing murals long?

Nah, I just got into it this year. I’ve been doing large paintings, but I haven’t done too many murals. I kinda had an interest before the [2014 Richmond Mural Project], and I wanted to learn about murals, so I volunteered and got to hang out with Ekundayo,

Onur, Wes, Chazme… I got to help Ron English paint his wall, which was one of the biggest things that’s happened to me this year, so I was in awe of that. Just sitting and talking to these guys, learning about their process and how they do it, and being able to ask them questions about technical stuff really catapulted me more into trying to get into murals.

I wanna say after that, maybe two weeks later, Hamilton Glass hit me up and was like, “Yo, I got this studio space, could you come paint a mural?” Since then I’ve done three or four murals. This one [inside the High Point Gallery] is the biggest one I’ve done, and was a collaboration project with my boy Johnny Acura. So together, this is our biggest wall yet. This was a volunteer work, but it was fun and quick. My friend that asked me to paint [the] space said that they were looking for artists to come in, paint, and throw a party, then showcase artists out here. I was looking for more opportunities to get my work out there and build up that fan base. We got it done within two days and it didn’t take that much out of me. 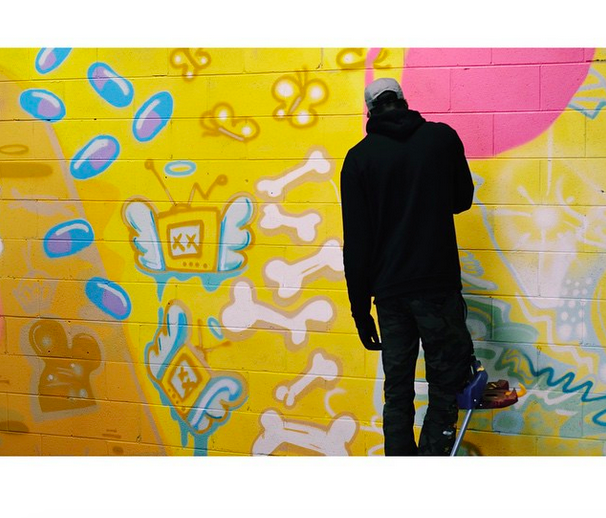 So what are you excited about now, or coming up in the city? Do you feel like stuff’s about to pop off? Do you have a lot going on right now?

I’ve got a few people who have hit me up that have some paid murals coming up, and I’ve been doing a lot of commission stuff. But I’m really trying to get a big wall somewhere in Richmond–a nice healthy piece of real estate. I’m also trying to do another solo or group show with some other artists here in Richmond, maybe even Atlanta or NYC. We’ve got a few things in the works now. I’m working with my boy Antonio Knox and getting stuff lined up on the East Coast because I think [2015]’s going to be pretty big for the Earl Mack brand. I never thought I could’ve sat down at a barbecue with David Flores and talk about murals.

It’s cool to be able to drive down the street and see artists from all over the world in my city. They’re coming here to see us, see the city, see what else RVA has to offer. It’s all good, regardless of who did it. The work speaks for itself. Sometimes I find artists on Instagram that I have no idea who they are, but I start following them and their work is crazy–it’s some of the dopest stuff I’ve seen and it’s being viewed through Instagram. I don’t even have a website right now; everyone who’s following me is following me only through Instagram. That’s how I’ve gotten to where I’m at now. 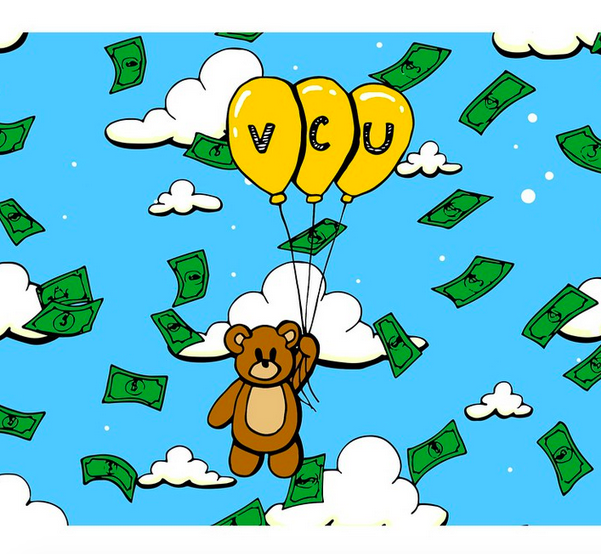 Well I think you’re on your way. Do you feel like you aspire to great work?

Yeah, I definitely want that. I want to do art professionally and not have to worry about having part time jobs to support myself. I want the work to support me and fuel my dreams, so I’m able to help fuel other people’s dreams. I feel like if I can get on, I can get my homies on, and we can just create our own artists’ atmosphere to do whatever we want to do. That’s what we’re trying to do now, more than anything.

I’ve even created my own art show and got 20 artists, put them in a gallery and made the thing a real dope event. It was accessible to anybody that cared about the event; there’s no window shopping. You don’t have to be on the outside staring in, you can be on the inside to see it just as well, if you want to.

I feel like a lot of time in RVA there’s this sheltered community [that’s] kind of hard to get into unless you know somebody already in there. And that’s going to happen regardless, but I want to create a space where that doesn’t necessarily have to be the case. If you’re in the arts and you wanna do it, you can. If you think you’re good enough, just come put it out and the world will let you know if it’s good or not. If the world doesn’t like it, still, continue to find a creative outlet to express yourself and put what you want to put out there.