For the second year, Richmond Black Restaurant Experience has animated the city, drawing attention to over 30 Black-owned restaurants from soul-food favorite Mama J’s to the craft cocktail-focused Minibar.

Richmond is gaining national recognition as a food city, with National Geographic, Zagat, the Washington Post and many other news outlets and publications declaring something organizers Kelli Lemon, Amy Wentz and Shemica Brown already knew: We’re the “next Great American Food City.”

The first year brought in over $500,000 for Black-owned restaurants in the city, and prompted a name-change from Black Restaurant Week, said co-organizer Kelli Lemon. “After the success of last year, we decided to make it a business [called] Virginia Black Restaurant Experience because we were doing so much more than eating.”

From the mobile soul food truck festival in Abner Clay Park, for which the Black History Museum opened its doors at a discounted rate, trap yoga at bareSOUL, The Basement at the Vagabond, and the culminating Stick A Fork In It festival, over 130 businesses participated in addition to the 30 featured restaurants.

The Stick A Fork In It festival featured chefs and caterers selling $3 to $5 plates, demonstrations and a cooking competition, and live sets from the Legacy Band and DJ Lonnie B.

One of many success stories from the expanded Black Restaurant Experience is reflected in Keva Miller, a chef and business owner who won best caterer at Stick A Fork In It. A few months earlier, I’d gone to Manchester Friday Fridays to see her cooking demonstration. We’d met a little over a year before and I wanted to support, especially as I noticed she was more consistently giving demonstrations and hosting events. She was doing a lot of work towards getting her catering license so she could cater larger events and do demonstrations for even larger crowds.

Fast forward five months and she’s on stage at Stick a Fork In It after a day of prepping in her shared commercial kitchen space. In a crop top branded with her company name, FeedShine, and joggers, she guided the audience through a demonstration of her massaged kale technique.

“Feedshine is a holistic lifestyle company that I started to be a one-stop shop for self-actualization, which is just a very complicated term for finding yourself,” said Miller of her catering and private chef service company.

She tells the story at every event with celebrity reflection. After undergrad, she had everything she needed and was living good working as a food service rep for Pepsi. Equipped with a company car, she went around to local chains as far north as Dale City and as far west as Goochland/Emporia convincing them to endorse Pepsi as their soda carrier. She came into the position with 1,200 customers and her job for the next three years was maintaining and getting more customers.

“I basically had everything that an entrepreneur would have without the full-on risk of having my own business,” she said. “Your job is basically free training, so you can get an MBA that you also get paid for if you pick the right position.”

In her final years with the company, she became painfully aware of internal work that she needed to do. On top of her phone ringing from 8 am until 8 pm, the constant hassle of connecting maintenance people to delivery guys at plants, meeting with prospects and ensuring that client accounts were secured before their business doors opened, she was fatigued by depression and just slept when she wasn’t at work. She was skipping breakfast and eating poorly. Things changed when she started having a little fun in the produce section.

The experience led to her cookbook, Trill Prep, which features over 100 recipes, affirmations and personal stories. It’s intended for people going through the same experience, transitioning towards healthier eating, so there is a mix of chicken, seafood, and plant-based recipes.

For Miller, writing the cookbook was about telling her story and giving people the kind of guide she wished she had.

“She’s been able to find this niche to be able to educate us and to be able to stay true, to stay real and then also deliver a product that’s like… damn, but it’s good though!” said Lemon, “I am not a vegan. I don’t eat right. But I will eat her food. If she had a brick and mortar, I would probably be one of her number one customers.”

For Miller, it was a dream come true.

“Then at the end of it, for me to win the overall [best] caterer when I just got my catering license in January, it was great,’ she said.

“I’ve looked up to chef Micah forever. I used to look at him like I want to do that one day,” she said. “I want to be in the place where I can feed hundreds, thousands of people. Just to be able to share a booth next to that man was beyond everything. And then Shay, my plant-based sister, we were the only ones in there rocking with the vegan food and we was in there serving our love.”

For Miller, the Experience was a way to introduce people to food they may not typically opt for when dining out.

“It was great. I just love seeing us both ascend to new heights doing what we love and giving people this vegan food that a lot of times some people might turn their noses up to, might not be feeling it, “ Miller said.

During Black Restaurant Week, Miller catered FeastRVA and hosted her first private tasting at The Broken Tulip, two items on her bucket list as a chef. Next, she’s conquering another long-term goal by hosting The Plant Bass’d Brunch, Richmond’s first plant-based brunch, for an event at Vagabond with the Weekend Plans band and DJ Ease.

“I love partying and I love eating great food so I wanted to figure out a way to do both and really give people the type of experience that I want,” she said. I’m a plant-based person. I got tired of having to go one place to turn up and then have to go to another place, you know, to eat because it ain’t no food for me at the function.”

The brunch runs from 12-3 PM at Vagabond on West Broad Street with a day party to follow on May 6.

Miller sells her cookbook on her website and uses Instagram to keep in touch with fans at @ChefKeva. Brunch tickets can be purchased in advance via Eventbrite.

Cover Photo By: Lechele Trent-Jackson. Other Photos Trevin Curtis. This story was updated to correct the brunch hours and the number of recipes in Miller’s book.

When you think of the dudes that make up RVA thrash metal band Municipal Waste, dabbling in the culinary arts may not necessarily be the first thought that pops into your mind. But that’s exactly what drummer Dave Witte is pursuing while simultaneously being on tour.

With his girlfriend April Viar at the helm, the two will roll out vegan food truck, Go Go Vegan Go this weekend at The Vegetarian Festival.

All of the recipes are Viar’s, who has been a vegetarian for the last 30 years, and Witte will be helping out in the kitchen.

“That’s where the magic is with her and her food,” Witte said. “She’s a great home cook, she’s always cooked for me and we figured you know, let’s do this. I’ve always wanted to do a food truck, the timing was right, we wanted to be mobile, we didn’t want to have a brick and mortar so we thought a food truck was the way to go.” 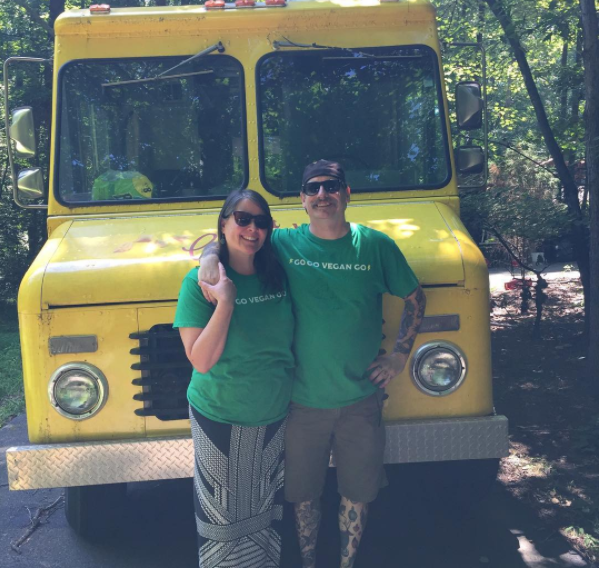 The couple started seriously looking into the venture last year and about a month and a half ago they bought the big yellow truck in Maryland.

“It’s always been in place thought-wise, but last year we started looking for trucks, life gets in the way sometimes, you have to wait for the right opportunity so we were weighing are options, looking around and this one just really spoke to us and we just hustled and got everything together and went up there and got it,” Witte said. “It proved to be the best choice we’ve made so far.” 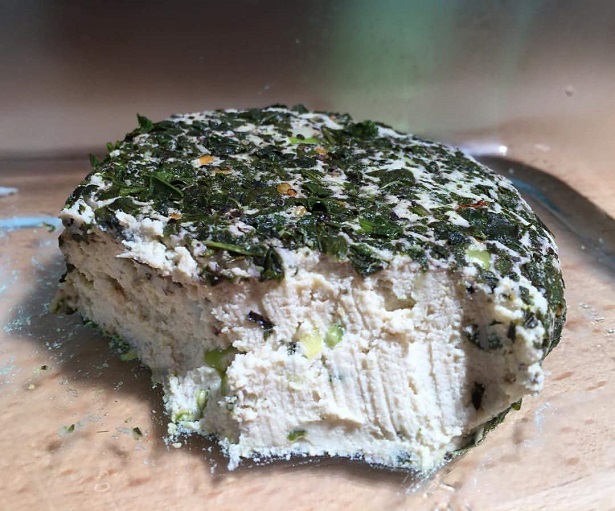 ”They’re super delicious. Right before we ended our term at the {Commercial} taphouse, April brought those on the menu and they did extremely well,” he said. “People still ask about them so it’s pretty exciting. It’s pretty much Pad Thai with French fries instead of noodles.” 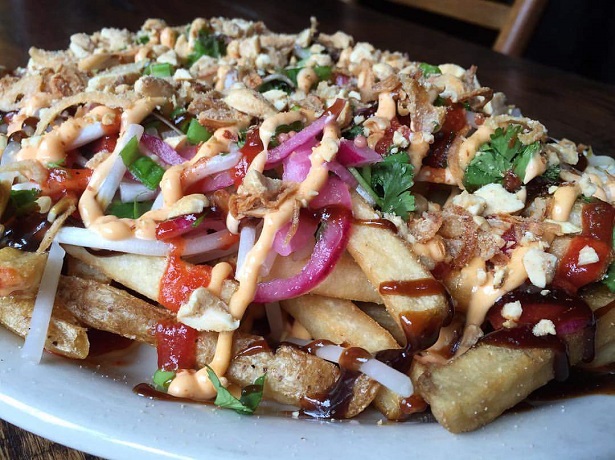 As for Witte, well he isn’t vegan or vegetarian just yet, but he said he’s starting to lean more and more in that direction.

“I eat less and less meat as I age, and to get down to it, vegan cuisine is far from what it used to be it’s not a microwaved Morning Star, there’s so many options,” he said. “I eat vegan a lot of the time especially when I’m out on the road.”

To get the ball rolling on their business, Viar and Witte decided to test the waters in the local food truck game by entering Richmond’s first Vegan Macdown competition in February, a challenge to see who could make the best vegan mac and cheese. And as if a sign from the metal gods or foodie gods (whichever you choose to believe), they took home first place in both categories, “People’s Choice” and “Judge’s Choice.”

“It was a nice confidence booster,” Witte said of the competition.

Go Go Vegan Go had their first event at the Cask Café a few weeks ago which Witte said was a great success.

“We had a very limited menu, we took over their kitchen and we ended up selling everything out and had a tremendous response,” he said.

The two plan to take the truck to breweries and other spots all over town.

“The list is growing, a lot of people are getting in touch so we’re working on that right now,” he said. “We’ll be at Ardent a lot, I’m sure well be at Hardywood, The Veil has invited us. There are some other places that aren’t brewery-related that we’re working on as well.” 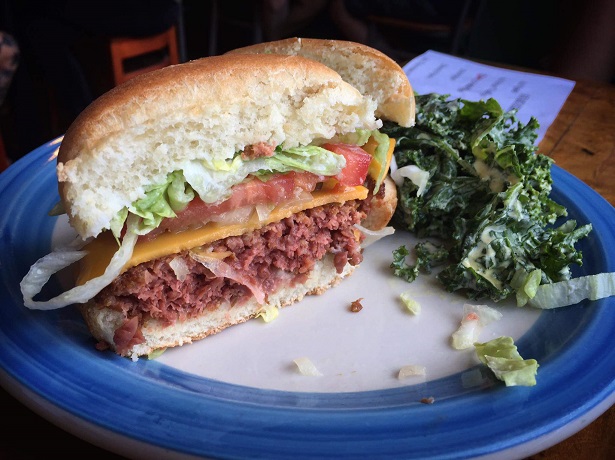 Viar will be wheeling around town without Witte just for the summer while he is on tour with Municipal Waste, who have booked a stint on Warper Tour which just kicked off last week and runs through August.

You can catch Go Go Vegan Go at the Richmond Vegetarian Festival this Sat. June 24 (Rain date 7/8) and at the following locations below and follow the truck’s adventures on their Facebook here.