The mural project that transformed the downtown canal walk and the old GRTC bus depot is returning to bring some color to Manchester.

RVA Street Art Festival, which takes place April 22-24th, will be centered around the iconic Southern State silos and will reach into the surrounding neighborhoods and a neglected park close to the site.

The hope is to revitalize a dilapidated piece of Richmond, an area that was recently reported to have 109 potholes in a 55-acre area.

“In my mind that’s the next arts district,” said local artist and RVA Street Art Fest co-founder Ed Trask. “It’s great when you can reinvent an industrial area like Manchester and instead of completely scrapping the history of what was here, you can start reinventing the buildings without losing the character so that’s why I love this area.” 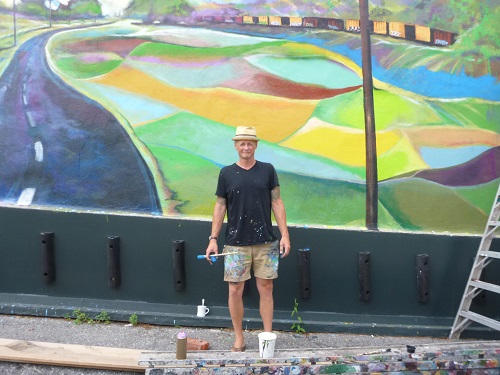 The nearly sixty-year-old Southern State Silos are a seminal piece of the Richmond skyline, and are one of the three largest silo sites in the country. Due to their gargantuan size, they will provide one of the most colossal canvases that the participating artists have ever worked with. These murals will be visible from downtown to 95, to anywhere along the river. 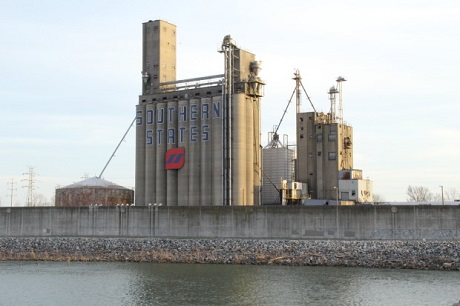 “Millions of people travel down the highway and would be seeing it,” Trask said.

The last few years, the RVA Street Art Fest, has been held at the former GRTC bus depot on South Davis Avenue, but back in September the property was sold to local developers DKJ Richmond to be turned into a mixed use property.

Trask said organizers decided to hold the festival at the silos to bring life to an iconic structure in Richmond.

“How incredible would it be to reinvent those silos?” He said. “Immediately with talking to people, those silos are an iconic simple to a lot of people. “Whatever we’re going to do, it had to be something that brought the community together that talked about the industrial revolution, that talked about race, that talked about what was happening in Manchester. The whole theme was going to be bringing people together bringing the community together.”
About 15 local artists including RVA’s own muralist Mickael Broth, Chris Milk, Matt Lively, Andre Shank, Ross Trimmer, Hamilton Glass will be on site painting along with six national artists. 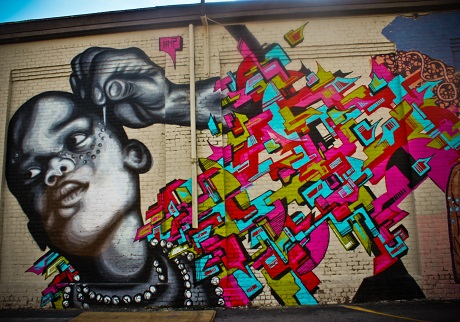 “We have this really nice tie in with the VMFA in that we’re using this African American photographer {Leroy Henderson} he’s photographed a lot of civil rights marches,” Trask said. “This guy called me out of the blue and I started realizing this imagery is completely pertinent to where we are.”

This year, the organizers are focusing on “Bridging the River” by revitalizing a park in Manchester alongside the James River and some surrounding warehouse spaces.

Some history of the area is not to be celebrated as it includes a trail that was a major pathway during the time when Richmond was the largest origin of African slaves on the east coast.

There will be an interactive exhibit along the Slave Trail in front of the silos to educate visitors on that piece of Manchester’s past.

In addition to the interactive exhibit, there also be steamroll printing from Studio Two Three, sculptures, a makers market, food trucks and craft beer from Taste the Local. 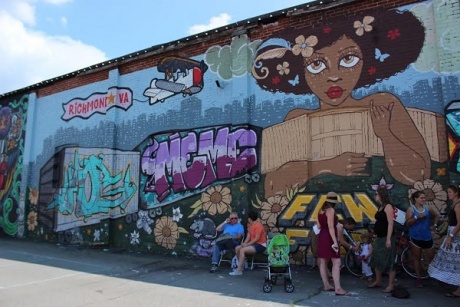 All the Saints Theater Company is participating a major way in this year’s RVA Street Arts Festival.

“Lily {Lamberta, Director} will be Leading a march that goes down Hull Street Saturday,’ Trask said.

And Saturday night, No BS Brass Band will end the day with some live tunes.

The festival will cost an estimated $125,000. About 85 percent of these funds have been raised and Trask has turned to the public with an indigogo campaign to try to raise the remaining $20,000. These funds are needed for paint, lifts for painters, security and hotels for out- of-town artists.

Check out the video below the organizers behind the street arts festival made to see the impact it has had on the community and how your contribution can help.

Trask said funding has come from a number of sources this year.

“Evreything from private donors, to private businesses, to corporations, the city’s not giving us anything this year that’s why indideogogo’s important,” he said.

Money raised at the RVA Street Art festival will go to organizations that provide art education for children including Art 180, Art On Wheels, and Studio Two Three.

The three-day RVA Street Art festival begins its rebirth of Manchester on April 22 and runs through the 24th. To be apart of this process you can donate here or sign up to volunteer here.

Studio Two Three, Richmond’s nonprofit community print shop, has an exciting year ahead of them! Starting this month, and continuing throughout the month of February, Quirk Gallery is showcasing works by artists who call the studio home.

END_OF_DOCUMENT_TOKEN_TO_BE_REPLACED

There are some things, I am quickly finding, that are synonymous with Richmond: brunch at 1 PM, copious amounts of PBR, music shows of all types every night of the week, and, now that this shitty weather has at least temporarily quit, doing everything possible on the river.
END_OF_DOCUMENT_TOKEN_TO_BE_REPLACED