Scott’s Addition is popping off like crazy these days, and though I won’t pretend not to miss the sleepy little abandoned factory town, complete with a random patch of woods over towards the train tracks, that I moved into in 2006, I certainly recognize that Richmond has embraced this area as the new hangout spot of choice. After all, there’s a lot to do over there these days, and the HofGarden is making a pretty significant contribution to that fact all by its lonesome. After all, it’s got three whole floors to offer for your entertainment! I’m not too enthused about the one that’s yet another craft beer spot, but the game room and rooftop pizza joint are just what the doctor ordered on some nights.

Get your tickets in advance direct from any of the musical acts or the Hof(10$) through the Eventbrite link(10$+fees) or at the door(15$) Doors open at 8, bring everyone you know because it’s Finally Friday!!!

Grab your beer stein and get ready to cheers (or should I say Prost?) to this news. The owners of The Hofheimer in Scott’s Addition are opening a beer garden and taproom in their West Broad Street space on Wednesday.

Annie Snipes, along with her husband Carter, revamped and opened the historic building as a private event space last spring and their regular summer rooftop event series, “Sunsets at The Hof”, was just about wrapping up when she said they had the idea for the beer garden.

“We wanted to utilize the rooftop more often for the general public first and foremost, we thought about a lot of different concepts that may take off well…” said Annie. “We went to Oktoberfest up in D.C. and there’s at least five or six spaces including a pop up German beer garden that went up and we realized it’s an idea that hasn’t hit Richmond, it was something unique.”

The beer garden will be two floors, with the taproom located on the first floor and the rooftop serving as the beer garden. It will have 22 taps with 15 on the roof and seven downstairs featuring mostly European brews such as Hofbrau, Weihenstephaner, Ommegang Rosetta (which is brewed by Duvel-Moortgat in Belgium), Brouwerij Het Anke’s Lucifer, and Achouffe.

Bobby Kruger, local restaurant veteran and General Manager for the facility said they checked out a lot of different beers and venues before narrowing down their tap selection for The Hofgarden, which is named after a famous park in Munich.

“I’ve had a lot of these before, we went around and looked at a lot of different beer gardens around the east coast while we were doing research for this and took notes on our favorites, beers that we liked of the ones we went to, and found all of those and put them on tap,” said Kruger.

“Downstairs we’re starting with seven that are all beer and we’ve got hardware on the way to add another five lines within the next two to three weeks,” said Kruger.

The plan is to expand their initial offerings as well as offer bottled beer.

The beer garden won’t carry any local brews according to Snipes who said it was a conscious decision out of respect for all of the area brewers.

“There’s so many great breweries in this neighborhood that feature their own local beer and people already go to that for the reason that they have their own, so we wanted to focus on bringing something new to the area, and not taking away from the local brewery, but adding something to the neighborhood.”

And to fill you up, the Hofgarden will offer up a menu of German pub fare including sausages, cheeses, mustards, sauerkraut, German potato salad and cabbage along with a few of their own creations and small plates.

In addition to beer and food, the taproom will have shuffleboard, foosball, darts, giant Jenga and Connect Four along with DJs on Thursday nights and live acoustic music on Wednesdays and Fridays.

Snipes said she’s particularly excited about the decor for the taproom.

“All of the decorations that we have come up with are all found objects from the building, we were able to use old gears from the original freight elevator, and when Adam’s Camera was here they had boxes of cameras that people had not picked up so we’ve reinvented all those things into art that are displayed in that space.” 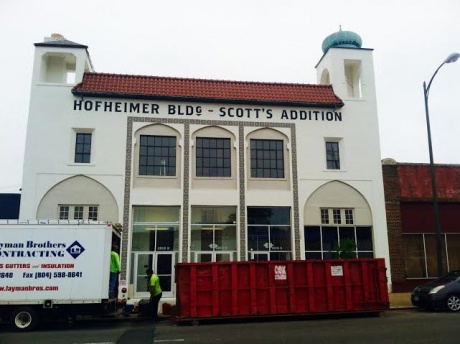 While the beer garden and taproom will only be open initially from Wednesday to Friday due to their private events on the weekends, Snipes said they are hoping to extend that in the near future.

“Once we hit Oktoberfest season, we’ll extend our hours or maybe even sooner,” she said.

As far as their long-term plans, Snipes is hoping for it to be a family-oriented place that also gives back to the community.

“We’re really wanting it to be a place where people can come and chill with their families and play games and have a relaxed experience no matter what the weather is,” she said. “We want to do community things, we had a lot of non-profits that helped us get started and we want to keep honoring them.”

The HofGarden will open to the public Wednesday, May 3 at 4 pm. Tin Can Fish Band will perform opening night and Mighty Joshua will perform May 5 at sunset to benefit Makindu Children’s Fund. See calendar here.