Celebrating their new issue with silkscreens and face paint, VCU’s INK Magazine took over the ICA for First Friday.

INK Magazine celebrated the release of their new publication, INK Magazine Volume 11: The Camp Issue, at The Institute of Contemporary Art as part of ICA’s First Friday celebrations on Friday, April 5.

The completely free event included a free copy of the magazine, face painting, photobooths, an INK tote, and live music from DJ Boygirl (full disclosure: that’s me). The museum was filled with a combination of local artists, students, and members of the community who had an interest in VCU’s student-run arts and culture magazine.

INK Magazine releases a print issue every Spring; the student staffers work hard throughout the school year on every aspect of the issue, from design and photography to writing and creative direction. It’s a huge relief to get the issue to the printer, and by the time of the release party, everyone was ready to cut loose and celebrate.

As the DJ for the evening, I wanted to fill the room with upbeat and acoustic sounds. My picks worked out: artists like Solange, Pharrell, The Internet, and Kali Uchis really had the room moving. Considering that it was my first time DJing at a museum, I was feeling the pressure beforehand. Thankfully, it turned out to be the most comfortable and entertaining event I’ve ever done. What’s more, everyone seemed to enjoy themselves, and the music.

But enough about me! A lot of other attractions graced the event as well. The free INK tote bags were being decorated with a silkscreen right there in the ICA, and attendees got to watch the silkscreening process happen live. A helpful sign next to the rack of finished totes read “Pick up your tote here (Please allow 15 minutes drying time).”

There was a photobooth that included numerous props, including shimmery bags and cowboy hats, for people to come and take pictures with. Attendees got creative, showing personality and having some laughs as they snapped a few pics. Face painting was a fun element of the event as well, and there was almost universal participation; designs ranged from cherry tops to eyeballs and from smiley faces to crying eyes.

At the end of the party, everyone headed home clutching brand-new copies of INK Magazine Volume 11: The Camp Issue. If you didn’t get one of your own, never fear: it will soon be uploaded to the magazine’s website. Keep up with what INK has going on at inkmagazinevcu.com, and at their instagram, @ink_magazine.

On April 3, Dirty Looks will bring a thought-provoking collection of LGBTQ films to VCU’s Institute of Contemporary Art.

It has been eight years since the first showing of Dirty Looks, a queer film series that traces contemporary LGBTQ aesthetics through historical works.

Beginning in New York City, Dirty Looks has been shown in several U.S. cities and international settings, including screenings at The Museum of Modern Art and The Kitchen in New York and The Hammer in Los Angeles.

The film series’ winter tour features cities such as San Francisco, Portland, Chicago, and Richmond. The Institute of Contemporary Art at Virginia Commonwealth University is hosting a free showing of Dirty Looks, starting at 6 p.m. on April 3.

For David Riley, a graduate curatorial assistant at the institute, the film series offers insight into queer culture and how it has shifted throughout history.

“We’re looking forward to hosting this event and hoping to hold more events like these,” Riley said.

Each tour has a different film lineup. This tour includes films featuring Angie Stardust, Xina Xurner, and other queer contemporaries.

“When I’m picking films for the program, I love going through old film guides finding titles that are interesting and not well known,” said Bradford Nordeen, who launched the Dirty Looks Inc. collective in 2011 in New York City because there was a lack of consistent space for queer film and art.

“I prefer finding filmmakers whose works haven’t been canonized yet.”

Dirty Looks attracted an audience from the start.

“The first showing we did we ran out of chairs, and it was in a blizzard,” Nordeen said. The collective’s goal is to build community by looking at queer history and to create a consistent space for queer films, he explained.

After the successes of Dirty Looks, the collective expanded to include an on-location segment, in which its films are shown in city spaces that were traditionally queer spaces.

“Art is made in life,” Nordeen said. “When we’re looking at queer art, it is communal.”

Although Nordeen expanded the collective from New York to Los Angeles, he said it is important to screen these films in other cities.

“You know, why not Richmond?” Nordeen said. “Places like New York City and Los Angeles — they need me the least.”

Nordeen and other members of the collective will host a panel discussion following the showing, and take questions from the audience.

Dirty Looks: Eight Years On will be presented on Wednesday, April 3 at 6 PM, at VCU’s Institute For Contemporary Art, at 601 W. Broad St. For more info, visit ICA’s website.

For the past 10 weeks, a group of Richmond high schoolers spent their Saturdays in VCU’s Sculpture Department doing everything from woodworking to welding. They are the first generation of Future Studio, a free semester-long program aimed at giving Richmond teens hands-on experience creating art with the department.

Future Studio is a partnership between VCU’s Department of Sculpture + Extended Media, VCU’s Institute for Contemporary Art (ICA) and Art 180, a Richmond based non-profit that provides art-related programs to young people living in challenging circumstances. The semester culminated in an art exhibition at Art 180’s gallery, a showcase made exclusively of student work. 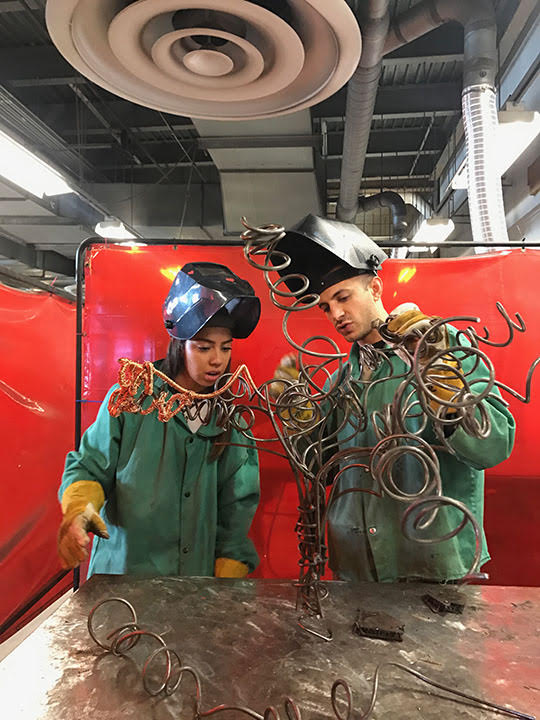 Matt King, Chair of the VCU Sculpture Department, has been dreaming of this project for years. After receiving a grant from the VCU Division of Community Engagement, along with additional funding from the VCUart’s Dean’s Office, the project became a reality.

“This was conceived of as a way to reach out into the community and give back, to open our doors up to young artists who otherwise might not have a chance to work with the types of tools and materials we have here in the sculpture department,” King said.

Some art programs in area high schools do not have many opportunities to experiment with sculpture, let alone resources as high-grade as the VCU facilities.

“Most high schools don’t offer any kind of strong program in three-dimensional art making, and this is true across the country,” King said. “Shop classes don’t exist so much in schools anymore, art classes rarely offer anything other than a perfunctory lesson on making something three-dimensional.” 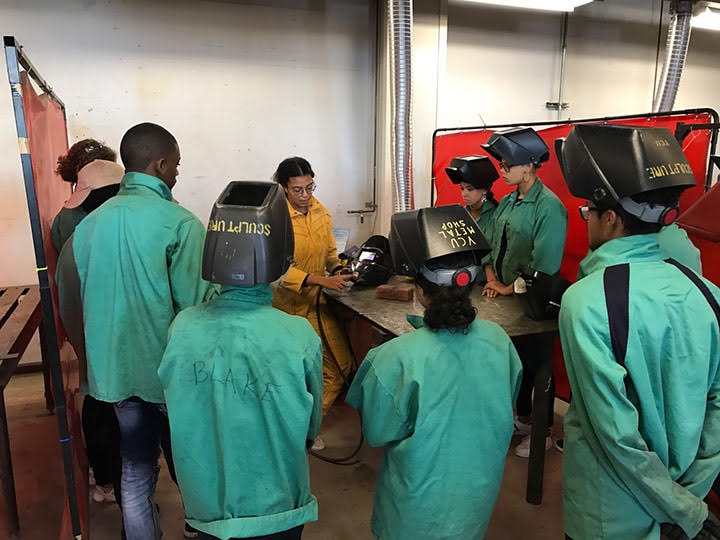 Meanwhile, VCU has the number one ranked sculpture program in the country, and facilities that include a highly functioning woodshop, metal fabrication shop and a host of digital equipment.

“It becomes this kind of melting pot for the city, for teens,” King said. “You have a student from St. Catherine’s working with a student from Meadowbrook and TJ. Having those students working together encourages a kind of dialogue that otherwise we wouldn’t be able to have.”

The Future Studio students do not require any prior experience, just a willingness to learn.

“We weren’t looking for students who had already studied sculpture or who had building skills or experience, we were really looking to hear their story, to find out who they were, with the idea that once they got here we would be starting from the ground up and they would learn together,” King said. 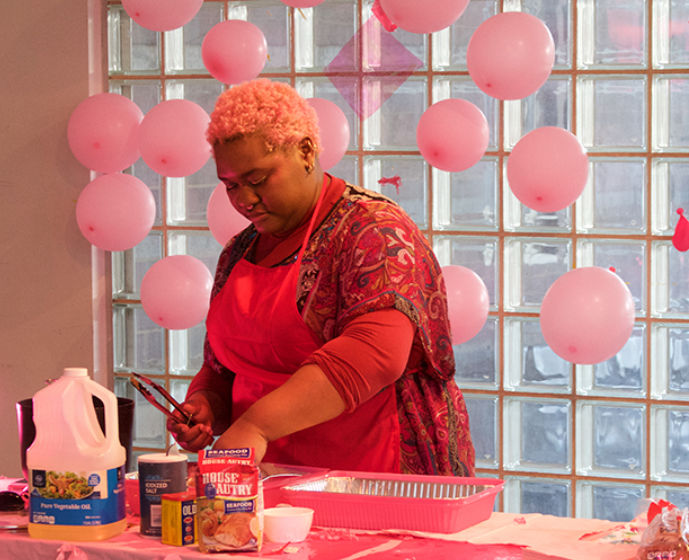 The students were given instruction on workshop safety and the intricacies of using hulking, intimidating equipment from the moving blades of a band saw to a plasma cutting torch. They watched demos in the wood shop with Leigh Cole, VCU instructor and shop technician, and were shown bending steel and welding by Abigail Lucien, adjunct VCU faculty, and metal tech.

Ian Gerson, a second-year MFA student in the VCU Sculpture Department, was the graduate TA for the program and spent his Saturdays these last few weeks with the students in the workshop.

“The kids got really excited about welding,” Gerson said. “Pretty much everybody’s project included some of the steel rod. They were just like lined up to weld, they were so hyped on that.”

Without access to these resources and equipment at their high schools, its an exciting first-time opportunity for a lot of the students. 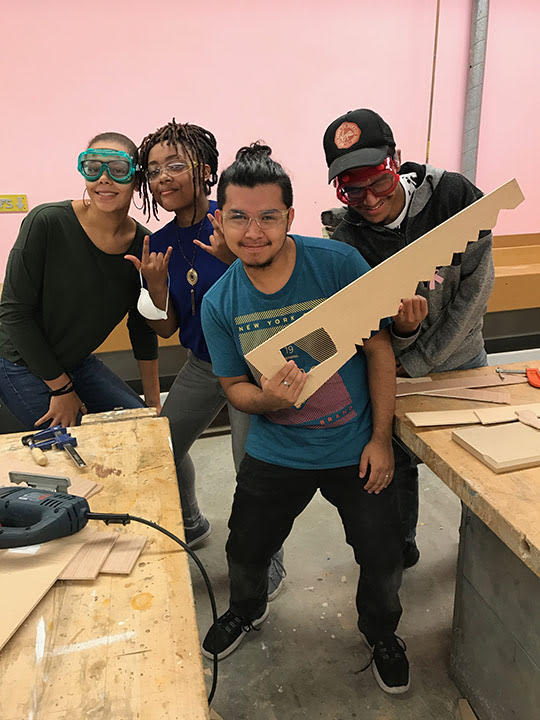 “There’s something exciting about the first time you build something that is stronger than you are,” King said.

But the program eclipses simply learning about tools and materials and physically making objects. The students participated in activities that helped to develop their sense of creative self.

“It goes much beyond building things. It really is a program that’s designed to inspire them to try to understand themselves and what’s important to them as young artists,” King said.

The head classroom instructor of the program and assistant professor in the VCU Sculpture + Extended Media department, Guadalupe Maravilla, brought in a variety of performance artists and undergraduate VCUarts students to teach activities to the high schoolers.

Gerson said these creative interludes were some of the most fun aspects of the program. One undergrad mentor entered the room on a skateboard. He left that way too, but not before leading the students in a raucous performance of a vocal symphony, where he played the conductor. 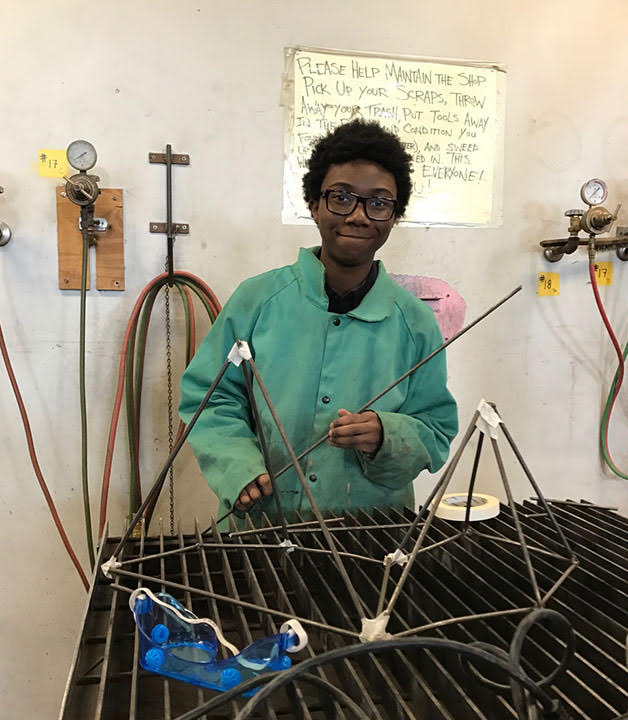 Mike Zetlan is the program manager for Atlas teen programs at Art 180, as well as the gallery manager. He calls the program a rousing success. “Trying to get that many kids to consistently show up on a Saturday is pretty hard,” he said.

Zetlan helped with the recruitment process, as well as eventually housing the exhibit in the Art 180 gallery space,  and said he was shocked at the turnout: 56 applicants for the 15 spot program.

He said that one of the most important aspects of the aptly named Future Studio is the way it looks to the future for its high school participants. It gave them a taste of the college experience, a chance to experience a renowned arts program and campus life. After the program, several of the eligible high schoolers applied to the VCU Arts program for the next year.

The Future Studio art exhibition opened at RVA’s First Fridays last week, where the students showed up with family and friends despite the weekend’s ice and snow.

“Even the staff has been really overwhelmed by how good this show is,” Zetlan said.  “I’ve gotten more feedback on the show than I have in a while…it feels a little bit more like a traditional gallery.”

King said that the program’s biggest criticism is that the students wished it would last longer. In fact, next semester the Saturday sessions have been increased from four hours to five. Applications for the spring semester of Future Studio are open now and will be closing on Jan. 18. The program is open to current sophomore, junior, and senior high school students.