Tim Kaine, the incumbent Democratic Senator from Virginia, held his first campaign kick-off rally this evening at Maggie Walker High School in Richmond. Set against the backdrop of campaign signs and bluegrass music from the Cary Street Ramblers, a crowd of around 300 people gathered in the gymnasium to hear the senator announce his re-election. The event included speeches from other notable Democrats including Mayor Levar Stoney, Congressman Donald McEachin, and Democratic Party of Virginia (DPVA) Chairwoman Susan Swecker, who fired up the crowd with a roster of Kaine’s achievements and calls to fight against the Republican agenda during midterms.

Stoney greeted the crowd with some friendly banter, telling the audience that Richmond was the premier city in Virginia, before launching into a story about his first experience with the Senator.  “Back in 2003, I was working as a field organizer on a House of Delegates race and he [Kaine] showed up in Yorktown, Virginia. There weren’t very many Democrats in Yorktown then, and still not a lot right now,” he said as the crowd burst into laughter. Stoney continued, “But I remember that evening a young Lieutenant Governor talking about the promise of the Commonwealth…that promise is that no matter who you are, you should be extended an opportunity to succeed. This is a man dedicated to this cause.”

After speeches by Donald McEachin and Ashley Hopkins, an alum of Maggie Walker, Kaine finally took to the stage. A seasoned veteran of campaigning he quickly started conversing with the crowd by addressing the current political climate. “We have a president now who sets a very different example,” said Kaine. “We have a president who divides and it is hard not to get discouraged by toxic rhetoric, but I am not a pessimist about this country or Commonwealth.” Most of his speech gave an overview of his long list of campaign priorities, such as the economy, education, gun control, healthcare, the rights of women and the LGBTQ community, and criminal justice reform. A member of the foreign relations committee, Kaine also touched on concerns that Democrats have over Trump’s handling of international relations, saying, “If he wants to start a war with Syria, North Korea, or Iran or whoever else he is tweeting at, he can say those things, but it will be our kids and grandkids who will risk their lives.”

His rally in Richmond is part of a statewide barnstorm over the coming week which will take him to Hampton Roads, Northern Virginia, the Eastern Shore, western parts of Virginia, along with other underserved locations throughout the Commonwealth – a key point he made during the rally. Kaine, a Richmond local elected to the Senate in 2012, has a vast political resume including city councilman, mayor, and governor, along with being the vice presidential candidate for Hillary Clinton in 2016. He is one of only a few national politicians who have ascended the political ranks in this way, a progression that has made him a popular candidate in Virginia. 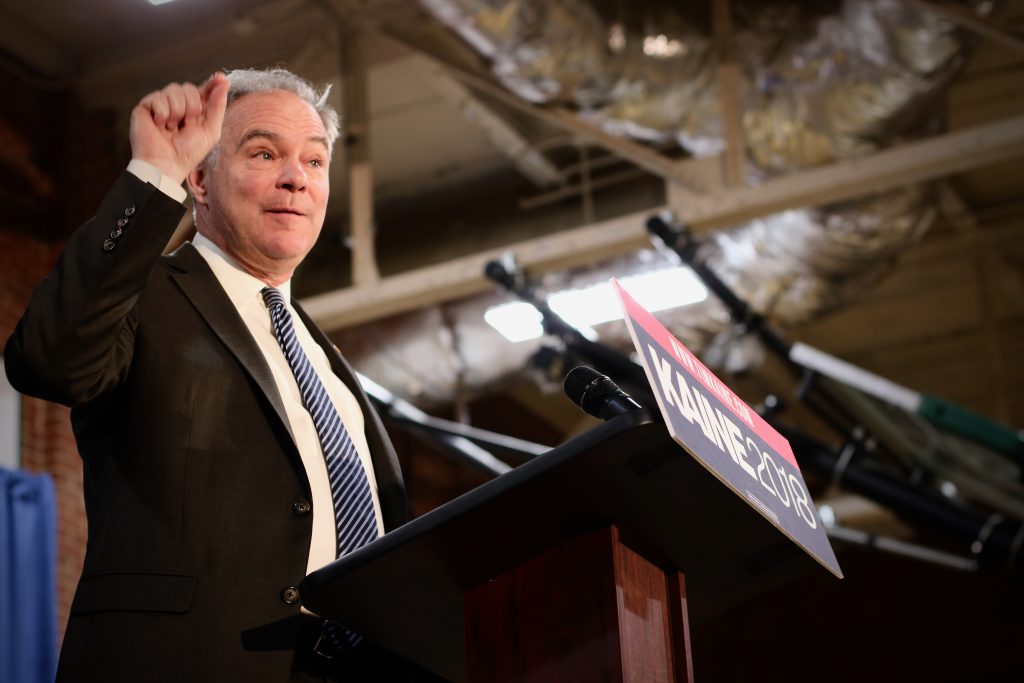 In a lunch for supporters earlier in the day, Kaine spoke with RVA Mag about his campaign launch, saying, “It is exciting, I have the traditional opening day jitters.” Making his hometown of Richmond the first stop was important to Kaine, who said he was glad some of his closest friends would attend tonight’s event. His campaign will travel all over the Commonwealth this week and includes over 30 events. “I feel good, I like the way it is setting up and we [have] this pretty simple message of Virginia for all.” When asked about his Republican opponents, Kaine said, “Their opening debate proved that they are trying to compete to be the Donald Trump acolyte.”

Yet during his remarks at the lunch, he was quick to point out that his race will not be focused on President Trump or his scandals, but on his plan to better Virginia – saying he needed to talk about the issues unique to the Commonwealth. This was something echoed by Swecker, chairwoman of the DPVA. “We are excited about the prospects of re-electing Tim Kaine, but also picking up some congressional seats,” said Swecker when asked how she felt about this year’s mid-terms.”There is a lot of enthusiasm out there, but we have an election every year in Virginia so we never let up.”

Kaine will face a crowded Republican primary field, including neo-Confederate and failed governor’s candidate Corey Stuart, an evangelical preacher named EW Jackson, Delegate Nicholas J. Freitas, and tech investor Ivan Raiklin. Yet according to a poll conducted by Christopher Newport University in early March, Republicans remain undecided on who they will favor during the primary process. Kaine currently maintains a 53 percent favorability rating and a 20 point lead over his Republican rivals. When compared with Trump’s 37 percent approval rating in the Commonwealth, the incumbent senator has reason to be optimistic – more so, because 57 percent of people polled also believe Virginia is on the right track.

Supporters at the rally shared Kaine’s optimistic sentiments. Before his speech, one rally goer, Barbara Smith, shared her glowing review of the senator, saying, “We all go to the same church, that is why I am here supporting him and we hope he comes back from the 2016 presidential election more confident. He is a genuine person.”

*John Donegan contributed to this report. Photos by Landon Shroder.