Raise a glass to celebrate Beer & Wine Classic at Maymont, hosted by the Dooley Noted Society! Taste some of Virginia’s finest beverages from local breweries and and wineries while enjoying food trucks, lawn games, and live music from Three Sheets to the Wind + the Rounding Cape Horns, America’s #1 tribute to yacht rock. Follow Beer & Wine Classic on Untapped for a cool way to rate each sample as you sip. Cheers!

Participants must be 21 years old or older. Parking available at the Historical Estate Entrance.

Paint the town GREEN with on March 14th for
Shamrock the Block 2020!

Join us at Natalie’s Taste of Lebanon on Thursday, April 12th at 6:30 pm for our Wine Dinner! For $65 per person, enjoy an evening of great food and wine as you listen to world renowned wine expert, Bartholomew Broadbent. A superb four course dinner has been carefully crafted to compliment the fine wine selections.

Make sure to make a reservation, as there will be limited seating. Call us at 804-499-3030 to book your seats now or click here to purchase tickets online! 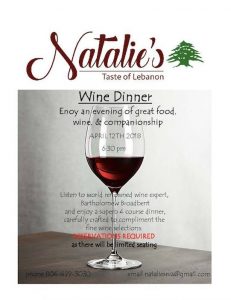 Do you have a closet full of clothes and nothing to wear? Does the idea of shopping make you need a glass of wine STAT? Would you love to make getting dressed every morning easy and stress free (who doesn’t?)!?

Join us for WINE and WISDOM from Sydney Lester of @chicstripes and learn how to create a capsule wardrobe.

In this workshop you’ll learn how to:

*Curate a closet of staple, seasonless pieces that make getting dressed simple

*Shop with intention to avoid impulse purchases (that often only get worn once!)

*Create multiple outfits from your capsule pieces, maximizing what you already own

*Find stores (consignment included!) that work for your budget, style, and lifestyle, making shopping easy, not a chore

You’ll walk away with:

This workshop will teach you how to create a wardrobe that works for you, not against you!

Grab your girlfriends and enjoy a night out with wine + fashion! Tickets available via Eventbrite.

Join us for our dinner series, featuring a different, locally-sourced, four-course menu and drink pairing each month.

February’s feature: A Battle of the Brothers Wine Dinner, Imagery vs. Benziger

Space is limited, so please RSVP via Eventbrite by February 20.

Please feel free to take advantage of our complimentary valet parking for this event. We will see you there! 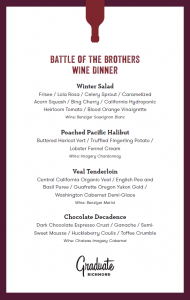 Garden Grove Brewing Company marked the 100th brewery for Virginia when it opened in Carytown back in February 2015. And on Oct. 21, it will become Garden Grove Brewery and Urban Winery, making it Richmond’s first production facility to serve beer and wine.

Since it made its way into Richmond’s bustling brewery scene, Garden Grove has cultivated a following with a unique and diverse lineup of pilsners, stouts, Belgian ales, flagships like the farmhouse saison and brown ale, sparklers, and barrel-aged beers.

For those who have had even one conversation with head brewer Mike Brandt, you know how dedicated, meticulous, and knowledgeable he is about his craft. He’s been a winemaker for years and if you have frequented the brewery, you may have noticed that wine has crept into several of their regular beers such the Belgian Quadruple “Death”, the Riesling sparkler, and Life (White Belgian Quadruple), giving their customer base a taste of what was to come.

“We do hybrids all the time,” said Brandt. “We have been for while, but we’ve been waiting to release it until we had our bottles of wine available.”

Garden Grove Brewing & Urban Winery will specialize in classic grape wines and serve wine by the glass with six to seven different options at any given time to choose from including Petit Verdot, Chardonnay, Rosé, Red Blends using Bordeaux varieties, still and sparkling meads, pyments (Wine Grape and Honey hybrids), and a few ciders. 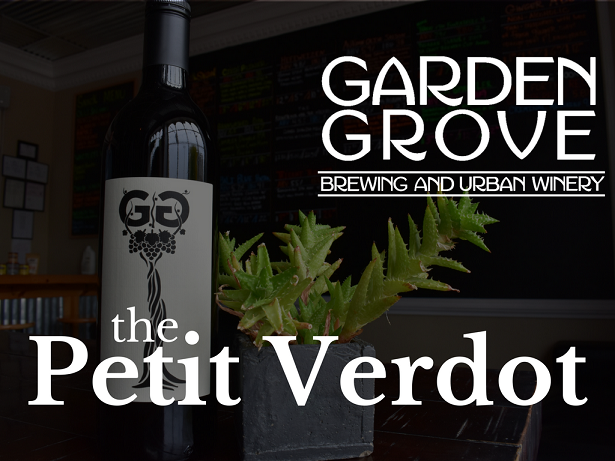 Making wine isn’t a move Brandt is jumping into blindly. Far from it.  After running a beer and wine supplies store in Harrisonburg for awhile, he landed a job at Naked Mountain Vineyard in Markham, Va. as its manager and head winemaker in 2002. From there, he moved on to Linden Vineyards in 2006 and worked as a research scientist at VSU delving into fermentation science for four years.

But even though the brewery has been churning out wine-like styles since it opened, Brandt said it wasn’t always the plan to become an urban winery as well as a brewery.

“It wasn’t something we talked about in the beginning, we didn’t have the money or the space to think about anything other than the brewery, and then as time went by, we never even really thought legally, we’d be able to do it,” he said.

After deciding they might want to jump into the winemaking business and doing some digging, the crew realized they made it just in time to be grandfathered into the law that would define them as a farm winery.

“The law was you had to have some amount of produce growing on site and they decided that they were going to change that,” Brandt said.  “On July 1, 2016, the law was changed so that a farm winery had to be zoned for agriculture use, so we submitted our application before that day.”

The crew, which consists of Brandt, and co-owner Ryan Mitchell and new Marketing Director Jesse Mobley, have partnered with Arterra Winery in Delaplane, Virginia to harvest the wine. Some of the wine grape-based wines will be made in collaboration with viticulturist and winemaker Arterra Winery’s Jason Murray.

“We go up there and harvest when the time comes and make the wine there and bottle it there and bring it down,” Brandt said.

And not to fret fans of GG’s craft beers, while the facility will now serve six or seven wine options, the taps will still have a regular rotation of at least 12 beer selections. But since they’re just starting out, Brandt said for now patrons will only be able to purchase wine by the glass, but as soon as they can get it ramped up, that will change.

“We’re starting off with a small amount…we want to see how it goes, we’re hoping everybody loves it and it does very well. By the glass and by the bottle will happen we’re just taking it slow so we don’t run out.”

Make sure to head out to the Carytown facility this Sat., Oct. 21, to help celebrate their launch as Garden Grove Brewery & Urban Winery. Funky Tonk will be performing at 8pm. Belmont Butchery will also provide charcuterie platters so you will have several meats and cheeses to pair with your wine.

And be on the lookout for a few beer releases in the coming months at the brewery and urban winery including Criminal Mischief, their Vermouth clone Oct. 20 and Diversion, a saison made in collaboration with Stone Brewing which is slated to come out Nov. 5. Its smoked oyster beer and a mead made with Shooting Point oyster shells will be featured at VCU’s Shell-Raiser’s Shindig event Oct 22. And if you haven’t already, be sure to snag your tickets for Garden Grove’s upcoming beer dinner on Oct. 30, featuring Jason Sparatta of Heritage, a charity dinner for the National Resources Defense Council. $49.