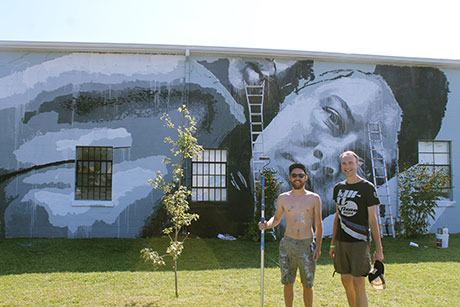 When you combine a variety of graffiti artists, a 100-feet-wide by 20-foot-tall blank canvas, and a dash of entrepreneurship you get the Second Annual Virginia Street Art Festival in Waynesboro, Virginia.

When you combine a variety of graffiti artists, a 100-feet-wide by 20-foot-tall blank canvas, and a dash of entrepreneurship you get the Second Annual Virginia Street Art Festival in Waynesboro, Virginia.

This festival, which brought together many local artists, wrapped up at the end of August and the response was overwhelming. There was a variety of entertainment ranging from food trucks, live music, a broad beer selection, and activities for kids. The main attraction however, was muralist Nils Westergard and other artists bringing some color and life to a drab industrial building in Basic City.

Ian MacRae, founder and owner of IT company E-N computers (pictured top right), is a Waynesboro native who sponsored the event. Over time, MacRae developed a deep connection to the street art around Virginia. His admiration first sparked when he witnessed the creation of the FreeWall in Charlottesville.

“It’s a wall where anyone can paint and it attracted mostly graffiti artists and I’d met a lot of the guys there,” said MacCrae.

Many of the artists would travel up to Charlottesville to paint on this wall at the base of the Avon Street Bridge.

“What I found really interesting is that their work got painted over almost immediately,” MacRae said. “If it was a really nice weekend, some guy would come along and paint over it the next day. Sometimes the really good stuff would stay up for a month or so and sort of get painted around, the really foundational pieces.”

Inspiration struck, and after 16 years of having his own business, he bought a gray drab building in Waynesboro’s Basic City neighborhood and invited some of the artists he’d become friends with in Charlottesville to help him transform it. 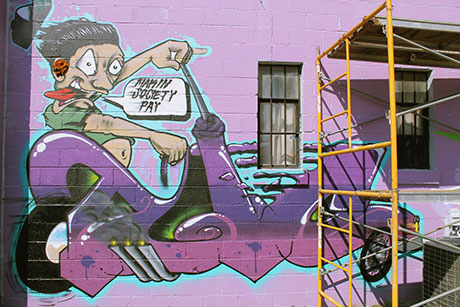 On the same day, where a dozen artists began painting this 90-foot wall, MacCrae’s neighbor was throwing his daughter a birthday party. With the creation of art and music from the birthday party, the two atmospheres began to mingle and mesh together.

“It just felt really good, a really great vibe,” said MacCrae. “So I thought you know, this is unusual but it’s working. And I thought we should do it as a festival. So later that summer in August of 2015, that’s exactly what we did.”

One of those artists MacRae contacted was Nils Westergard, who was the first RVA artist to join the Richmond Mural Project in 2015. 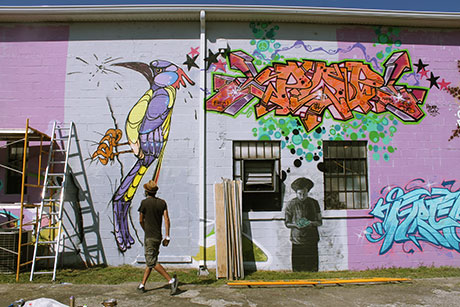 “He {MacRae) was trying to bring more attention like Richmond’s getting basically to Waynesboro, bring something new here,” Westergard said. “He thought my work would add a finer touch.”

Westergard is known in RVA for several murals including “Girl with Phone” near Belmont and Patterson, the Lombardy and Floyd piece, “Within” and “Icarus Fallen,” behind 821 Cafe off of Cary st.

He’s displayed his craft over all the world including London, Graz, and Amsterdam and painted in many festivals before, but was the headliner for the 2nd Virginia Street Art Festival, working with a 100 foot wide and 20 foot-tall canvas.

“By default my piece stands out more because it’s basically one of the bigger ones, there’s a lot of graffiti stuff which is nice, but for this kind of style, I’m close to the only thing,” he said. “This has to be the biggest one in Waynesboro that’s painted because there’s not much painted in Waynesboro.”

Westergard said he was a little worried at first and there was some chatter about a certain part of his piece, which he says depicts a friend of his named Emily.

“The organizers said we should probably not include this nipple,” he said. “Everyone that was coming up to me, I was like,‘is Waynesboro going to be really salty if I include this nipple?’ And they were like ‘yes, but we love it.'”

The muralist said MacRae was afraid of getting fined by the city’s council, but ultimately he chose to leave it in the painting.

Some members of Waynesboro’s city council were actually there volunteering at the festival and Westergard said MacCrae was hoping they would help to keep it growiing each year.

“He’s trying to get the city to put money up for this and support this more,” he said.

Peter, a Waynesboro resident and artist who attended the festival, said it brought new life to the city. 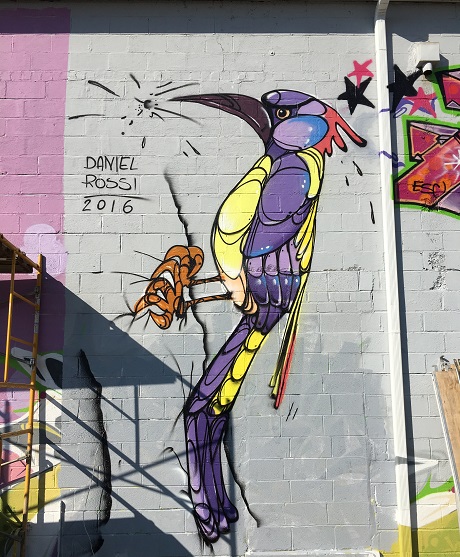 “It’s inspiring to see this come to town and take over these walls and rebuild this side of town,” he said. “Basic city is not known… we got people from the country club coming by to look at these murals, and that’s cool.”

That was MacRae’s exact vision for the festival.

“I wanted to connect that industrial feel to the art scene,” he said. “And let people who live here appreciate the fact that we do have an urban infrastructure in town and sort of celebrate that art.”

The local music industry had a chance to shine though this festival as well.

With the mix of artists from different areas of specialties, they’ve all come together to express their passions.

“It doesn’t matter if you’re a music artist or a painter, you can respect the talent and we all need each other in a way,” Taij said.

MacCrae offered a shout out to Richmond and the growing mural project as another inspiration to his creation. “I’ve seen how Richmond had transformed itself with the art scene.,” he said. “Like you’ve done Richmond with the mural project, the goal is to just keep improving the quality and making it seem fresh every year” said MacRae.

With street art in Virginia spreading like wildfire, MacCrae would love for it to leak into all parts of Waynesboro. His goal would be to see buildings apart from his, shine with color and art. 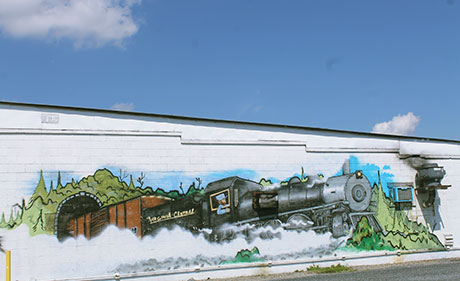 Westergard echoed Macrae’s thoughts on the local art scene. As a Richmond native, the muralist said he’s hoping this street art festival and festivals like it can grow in Virginia.

“It’s a shame I have to leave to do 80 percent of my work so I’d love to get more and more up in Virginia as much as I can and this is as Virginia as it gets,” he said.

The ever-growing response to Virginia Street Art Festival has ensured not only another year for Waynesboro, but is branching out and benefiting local organizations such as the Shenandoah Valley Arts Center.