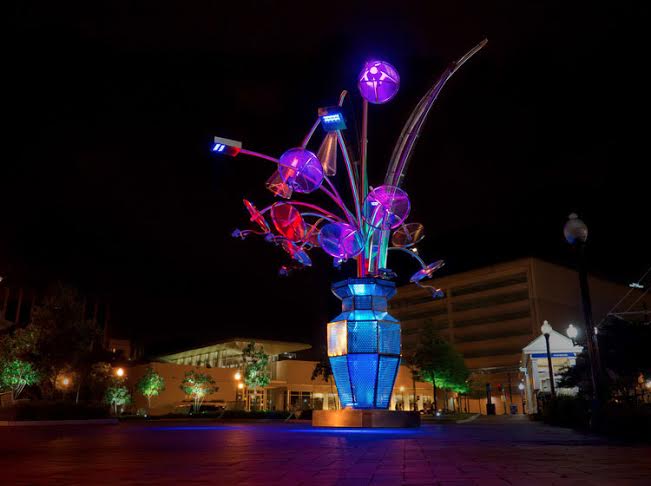 We live in a great area with many impressive art institutions. The Chrysler Museum is absolutely world class. The Museum of Contemporary Art in Virginia Beach is amazing.

We live in a great area with many impressive art institutions. The Chrysler Museum is absolutely world class. The Museum of Contemporary Art in Virginia Beach is amazing. There’s also the Hermitage Museum, the Peninsula Fine Arts Center, and the list goes on. However, one of the most integral and impactful institutions for the visual arts in Hampton Roads is the City of Norfolk’s Public Art Program.

The Public Art Program commissions and maintains the city’s public art collection. In fact, Norfolk holds a leadership role as the only city in coastal Virginia with a true “Percent for the Arts” Public Art Program.

The U.S. Bureau of Economic Analysis reports that the arts and culture sector represents 3.25 percent of the nation’s GDP—a larger share of the economy than tourism and agriculture. The nonprofit arts industry alone generates $135 billion in economic activity annually that supports 4.1million jobs and generates $22.3billion in government revenue.

A study commissioned by the Cultural Alliance of Hampton Roads calculated that each dollar cultural organizations spend in Hampton Roads has a multiplier effect of 2.47, and that nonprofit arts and culture organizations in Hampton Roads have a combined annual economic impact of $563,900,000. Dollars spent on the arts have been studied meticulously to test their impact on the economy and the arts appear to be an effective investment.

The economic merits of art investment are compelling, but the economic apologetics arts organizations are forced into by detractors absolutely fail to address the truly important value created by the investment in art for public spaces. Ultimately, the Norfolk Public Art collection serves to define and inspire the character of the city. Public art is an opportunity for a community to express and pass on values, history, vision, and passion. Public art is really an investment in creating tradition, a better future, fostering intelligence and communication, and ultimately promoting humanity. The unique ability for art to augment cultural wisdom and community vision far exceeds the 1% of the cost of capital improvement projects that is set-aside for the Public Art Program. A look at a few pieces from the collection will start to highlight some ways that public art serves to identify the City of Norfolk as a unique and enlightened place.

It is notable that Norfolk is home to the world’s largest naval base. The sacrifices and honor of our neighbors in service is a genuine reality of our daily experiences in Norfolk. An appropriate reference to this is the Armed Forces Memorial in Town Point Park at the edge of the Elizabeth River (above). It contains bronze sculptures that are spread around like papers blown in the wind. Each bronze piece is etched with the actual text of a letter sent home by a soldier shortly before they died. There is a letter for every major conflict in United States history prior to the construction of the memorial. The poetic image of the bronze pages blown by the wind at the edge of the river is effective, but the visceral reality of the text will forever magnify your respect for military service and the humans who engage in it.

Norfolk is also a place that aspires to offer a first class education to all of its children. Education is not only about schools, but is a community value. Learning is a never-ending endeavor that takes place in the infinite teachable moments that adults and children share everyday. A wonderful stone sculpture located at the Norview Community Center on Sewell’s Point Rd (below) is testament to how public art can communicate and in fact promote a community value. The freestanding stone sculpture is titled “Storyteller” and was created by artist Madeline Weiner. I travel by this piece regularly and see it functioning as a gathering place for students walking home from nearby Norview Elementary, Middle and High School. It functions as an extension of the school day and facilitates conversations and interactions that might otherwise be lost as the individual retreats home to computers and television.

Norfolk has a significant and defining issue as we witness climate change and sea level rise changing the geography around us. A trip to the Norfolk Zoo will remind visitors of the miracle and wonder of nature. The Virginia Zoo is a treasured resource within the city limits. The Public Art Program commissioned Mathew Grey Palmer to create a life sized aluminum elephant at the entrance to the zoo (below). The elephant has a butterfly that rests on its nose. It is an impressive creation and few can pass by it without taking a photograph in front of it. Closer inspection reveals that the elephant is made up of hundreds of butterflies and the butterfly is made up of elephants. The title of the piece is “All Things Within All Things” and the concept communicated by this piece is one that resonates as one travels through the Zoo. The message conveyed by the artwork reminds us to look beyond the impressive spectacle of the animals and see them as part of a greater ecology. That message also reminds us that we, as human beings with free will, have a role in that greater ecology. In a very powerful way the sculpture calls on us to reflect on our place as a vital part of all things within all things.

The Norfolk Public Art Commission is composed of community members that reflect the diversity and intelligence inherent in the populous. The selection and placement of artworks is a well-considered process that functions in a connective way to strengthen the communities involved. Public artworks are not just decorative adornments; rather, they serve to communicate about the place they inhabit. The Public Art Program actively engages local artists and the local art community with regularly announced opportunities.

There is a feedback loop that is created when artists that live within a particular city are given the opportunity to become active culture creators within that community. Giving local artists a voice helps to magnify the role of public art as an agent of “place-making.” Take for instance a project by local artist Cheryl White titled “The Tide That Brings Us Home,” which was installed in HRT light rail cars and stations in 2012 (below). This project featured letters between military service members and their families. The artist culled letters from local archives and personal friends then had them graphically composed and displayed for train riders to view. Cheryl White may not have been directly referencing the Armed Forces Memorial in Town Point Park. However, the notable connection is a testament to how The Public Art Program fosters a feedback loop that reiterates the character and values of our city with each new work and, by extension, every time an artwork engages a member of the community.

As a home to NATO, the Virginia International Shipping Terminals, and major rail lines Norfolk holds a position as a nexus point for international business and communications. The “Metalmatisse” by Electroland–located centrally in downtown at MacArthur Square–appropriately expresses this (top image). The monumental stainless steel form mimics the traditional still-life subject matter of a flower arrangement and is potentially metaphorical of growth and blooming. However, elements of this piece are far removed from the historical reference to Matisse. The sculpture is an automated and interactive sound and light performance. Each of the 14 “flower” forms contains a motion sensor that detects movement and responds to people within its vicinity. This piece engages people and they are compelled to move around it. It adds energy and vitality to an already active transit and pedestrian hub.

Arguably, “Metalmatisse” is a flagship piece for the Norfolk Public Art collection. Its form suggests the melding of tradition and advancement. Its brightly illuminated and high reaching structure speaks to the ambition driving Norfolk forward. It creates a dynamic color and sound environment that reflects the character of a city that seeks an innovative and enlightened future.