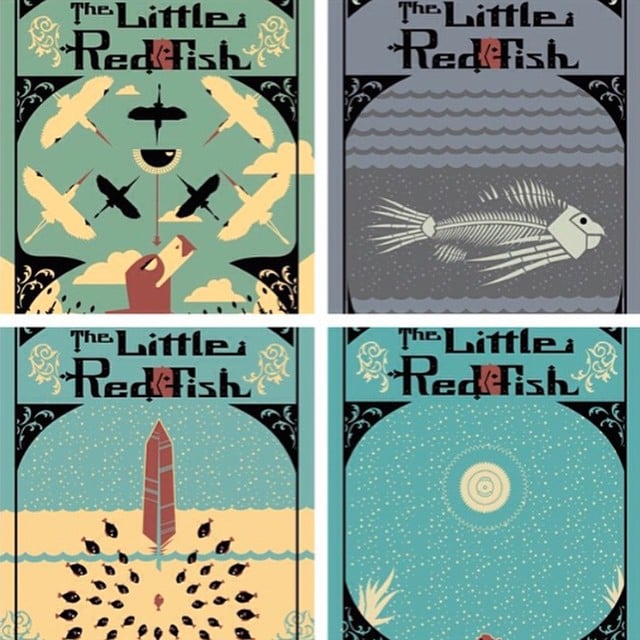 A pinup show leading up to the release of the second issue of The Little Red Fish, and celebrating the Iranian New Year, will take place on Friday, March 6 at Bonfire RVA.

Though it is a political allegory, the story is softened somewhat by being produced in the form of a comic. “At its very core, it’s a book about dissent and about standing up for what’s right, more so than it’s literally about the Iranian Revolution,” says Khodabandeh, himself half-Persian. While his heritage played a role in his artistic pursuit of the topic of Iranian lore, the artist also spent some time in grad school researching the stories. He developed a fondness for blending traditional Iranian art with modern comic styles.

Khodabandeh has a background in graphic design, but does not allow himself to be restricted to that field. Instead, he ventures into political activism, illustration, photography, collage, drawing, and comics, allowing the project to determine which area of expertise to employ.

For The Little Red Fish, Khodabandeh worked in pen and ink with digital coloring to create his illustrations. 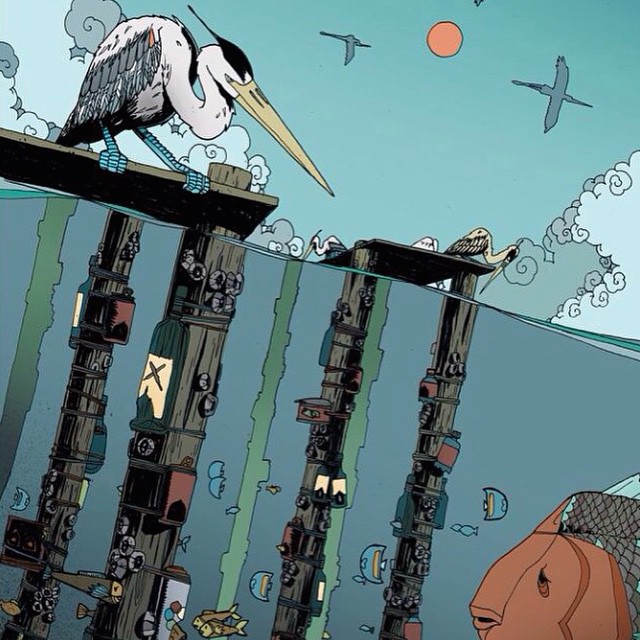 Image from The Little Red Fish via Mended Arrow Design

Khodabandeh blends a variety of techniques to create a singular aesthetic. The imagery deals with patterning and what is called “black-blocking,” a cartooning term in which large quantities, or blocks, of black ink shape or define the shadows of the forms within the work.

Khodabandeh sites old Jonny Quest cartoons and the work of Frank Frazetta for examples of the technique.

The Little Black Fish, Khodabandeh’s first book, is a translation and interpretation of an Iranian story with illustrations to match his rendition of the text. It was released in October 2014

The artist had always intended his first book to be part of a larger project with narratives revolving around the Iranian Revolution and Iranian mythology.

For his first book, Khodabandeh took influence from Bijan Jazani, an Iranian guerilla leader who also had a fine art practice, in his use of isolated shapes and vibrant earth tones to create a strong sense of movement.

Khodabandeh added influence from Mike Mignola’s coloring and use of black blocking, along with the economy and gradients of Japanese woodblock artists to create a more complex version of his original style for The Little Red Fish.

“The Little Black Fish is a lot more of a fokloric looking art, whereas The Little Red Fish is a very accurate representation of his ability; it’s just really good and really colorful,” says Moffitt on the evolution of style between the two books.

Becuase Khodabandeh has a predominantly fine arts background, he decided to enlist Moffitt for the writing of the second book, instead of going it alone. The two met through a joint release and book signing at Velocity Comics, when Moffitt was putting out a collection of short stories and Khodabandeh was releasing The Little Black Fish. After trading books, Khodabandeh approached Moffitt with the concept for the second book and a stack of research on the Iranian Revolution.

“He’s the writer and I’m the artist, but we definitely give each other ideas,” says Khodabandeh. “We have a creative relationship that really encourages being honest with one another and trying to make each other’s work better.”

Moffitt explains how surreal it is to work in a collaboration of this sort, stating, “I imagine it’s what it’s like to write a book and then have it made into a movie. You have this world and these people inside of your head, and then you can see them–see them move, see them talk–and that’s really cool.”

The Little Red Fish is a sort of re-telling of historical events, with different twists added to the narrative. “We’re compressing twenty-some-odd years of political toil into one book,” says Moffitt. “It was really interesting because a lot of Bizhan’s relatives and family members were associated with the Iranian revolution in some way, so it was nice to have the personal connection with such a significant event. And also, his illustrations are just amazing.”

The pinup show at Bonfire RVA grew out of fan art received by Moffitt after the release of the first issue of The Little Red Fish. Both Khodabandeh and Moffitt were intrigued by the way people reacted to their work, and decided to make a show out of it. “Some of it came out of curiosity to see how other people and other artists with fairly different styles would react to, or feed off of what we’re making,” says Moffitt. 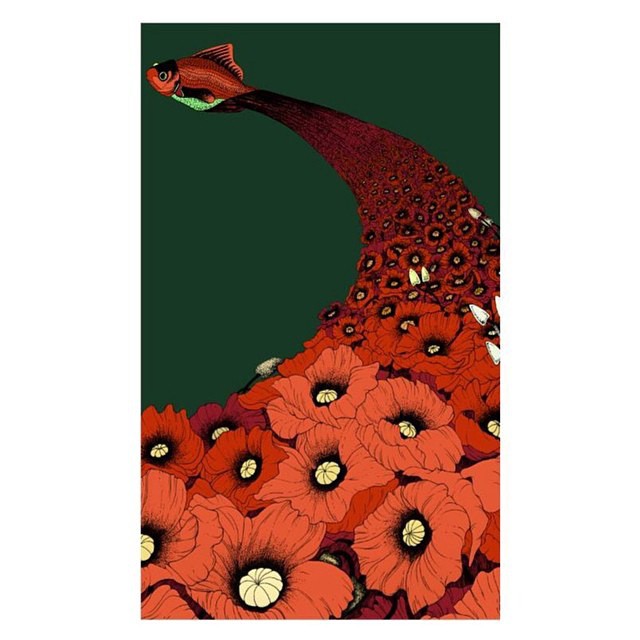 “It’s really humbling too,” adds Khodabandeh. “I’m looking at a lot of work and it’s like, ‘Man, you want to do an issue?’ It’s such strong stuff that it makes me feel like I’m a little mouse amongst giants in this exhibition.”

As for the venue of the pinup show, Bonfire RVA founder Jacob Eveland says, “Everyone is free to come by for First Friday. We’re a pretty easy-going group, we plan on doing First Fridays until it gets cold again.” Thankfully, Bonfire has agreed to open their doors despite the dreadfully freezing amount of slush/snow/ice covering the city.

Bonfire RVA is a collective with four residing, working artists, and is a somewhat new addition to the First Friday gallery lineup. March 6 will mark their fourth official participation in the monthly event, after closing their doors for the winter months. The Little Red Fish Pinup Show is different from other Bonfire First Friday events because it is concentrated on a central theme and spotlights specific artists.

“In a lot of ways it embodies what Sink/Swim embodies, which is don’t talk about doing stuff; go do it,” says Moffitt.

Bonfire RVA, located at 316 Brook Rd., will continue their involvement next month with April Philip Barbato, whose plush monsters and paintings will line the walls of the space.