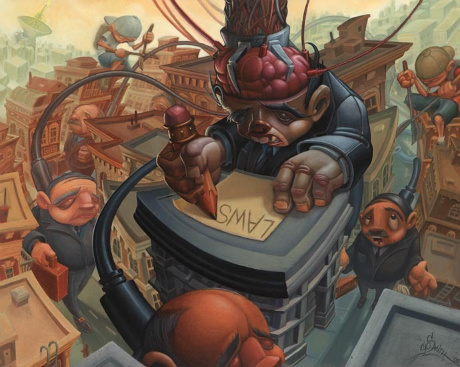 Drawn Out Procedures: The Various Occupations of the Richmond Illustrators Club

If you’ve ever worked at a veterinary clinic or rescued a pet that pays the rent for one, you are probably aware of the delicate procedure that is rectal temperature taking. Be it dog or cat, you want to convince the animal that you are working in their best interest, to comfort them while simultaneously maintaining control of the situation. You know that the success of your job and the safety of your hands, rely completely on the appeasement of that semi-feral you’re scruffing, with full knowledge that in some way, despite the necessity of it, you are violating them.

If you’ve ever worked at a veterinary clinic or rescued a pet that pays the rent for one, you are probably aware of the delicate procedure that is rectal temperature taking. Be it dog or cat, you want to convince the animal that you are working in their best interest, to comfort them while simultaneously maintaining control of the situation. You know that the success of your job and the safety of your hands, rely completely on the appeasement of that semi-feral you’re scruffing, with full knowledge that in some way, despite the necessity of it, you are violating them.

The occupation of the veterinary assistant is not unlike that of the illustrator. Creating a visual representation of literature requires an ability to perceive the intentions of the writer, to distill their perspective and incorporate it into a work that is also true to your own artistic vision. Be too slavishly representative of the text, and you lose control of the piece. Exert too much authority, and you are bound to meet the harsh acquaintance of the gnashing teeth of a misinterpreted author.

With their show fast approaching, I sat down at Harrison Street with Holly Camp and Katie McBride of the Richmond Illustrators Club, to discuss the role of the illustrator in the creative community, the purpose of their group and the appetizing subject of sticking things up the ass of an angry Yorkie.

The Richmond Illustrators Club, or RIC, has been around for awhile – somewhere in the vicinity of 20 years according to Katie – but it has evolved a bit since its inception.

Katie McBride:I feel like it started more as a way of being able to spend time with other illustrators, like ‘This is what I’m working on. What are you working on? Let’s have a beer!’ You know, really, really low key. I feel like it’s become a little bit more of a promotional thing, rather than a bunch of illustrators sitting around, talking about art, shooting the shit.

Holly Camp: We’ve kind of used it as a way to motivate people to keep doing their own work as well as work for clients, and a forum to talk about what you’re doing. It’s reassuring.

As the longer standing members phase out and are replaced by the constant stream of successors piped in by the VCU School of the Arts, the RIC serves as a transitional facilitator for students unaccustomed to the independence of making their own assignments.

It also helps to assuage the sense of isolation inherent in a line of work that is definitively individualistic. This is of course a commonality shared by many art forms, but with it’s emphasis on commission based, literary interpretation, illustration has it’s own set of unique problems, conditions and philosophies.

KM: There’s a narrative quality to most illustration. Ideally, or maybe professionally, it would be a piece of communication art. It accompanies something else, some kind of story; and that can be either in a sequential kind of way, like comic books are definitely illustration, but you can get a gallery piece that can stand alone that can also be an illustration. Typically it’s pretty representational. It can be abstracted, but I think you’d have a hard time calling a completely abstract painting an illustration.

It’s not being literal. Say that there’s an article about waterboarding. A realistic drawing of waterboarding is more or less pointless. You’re trying to create an image that expresses the unsaid, the underlining meaning, maybe more thematically. You also have to pull the audience in.

HC: The one thing we noticed last year that was tying in all the pieces of the show was a really strong composition. The pieces themselves were very different, stylistically as well as with levels of detail. Some were things that would apply to kids, others that would apply to really serious subject matter.

With artwork that is generally reliant upon the narrative provided by accompanying media, the prospect of curating a gallery show for illustrators might seem counterintuitive. The RIC seeks out a different juror for their yearly show each time. This year they landed Marshall Arisman, who is a highly recognizable illustrator with a list of publishers so long it would be impractical to name them. At the risk of sounding cliché, you’ve seen his work before.
The decision to court such an accomplished juror was a deliberate one. Name recognition greatly encourages submissions, and as the show is not limited to members of the club, the quantity of work submitted generally impacts the quality of the show.

Using a famed artist has its complications, like the inevitability of communicating with someone in New York. With the geographic non-specificity of the Internets, a juror can be based anywhere, but the technology that allows for this has exerted a strange influence on the jury process.

KM: The compositions pop more off the screen than they do in person. Some of the decisions could have been different, because you can see texturally what they actually contain [in person].

Regardless of the jury process, the submissions themselves adhere to no discernable artistic perspective. Some are obvious commission pieces with identifiable clients. Others could grace the walls of a gallery, beach house or loft apartment. The RIC is an amalgamation of people with common professional goals, not members of a central movement.

A piece by Holly featured on http://richmondillustratorsclub.blogspot.com, one of the increasingly popular greeting cards she crafts, depicts a stylized rat. It would come across as urban and gritty if it weren’t for the decidedly cute rendering of its face and paws, and the use of color in those places.
She shares that she has a sort of phobia of mice and rats and feels compelled to paint them out of what can be assumed to be either a form of self-therapy or masochism. Logically, I ask her if she owns cats.

HC: I’ve thought about it. My husband’s allergic, but I’m like they could be our little killers.

KM: You could get a terrier.

KM: They’re so cute, but seriously…

SPD: I work a day or two a week as a veterinary assistant, and I have to deal with them. It’s not fun.

KM: I used to do that. I hate to say it, but I don’t like Yorkies that much. They’re bitey. You ever have to anally take the temperature of a Yorkie?

KM: I guess ‘rectally’ would be more appropriate.

HC: Yeah, I don’t do anything anally with a dog.
—————————————————————
But with all the careful attention and obsessive dedication required of the professional illustrator, I can’t help but think that if she’s ever drawn one, that’s not entirely true.

Editor’s Note: The above article appears in the current issue of RVA Magazine (Dream in RGB). Check it out now or die at the hands of the executioner.