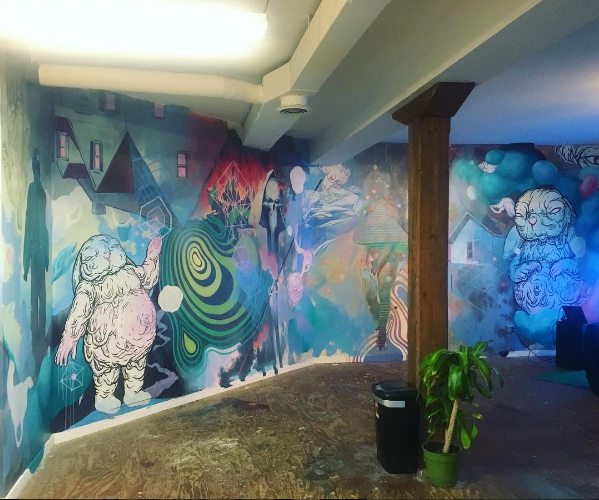 In July, Endeavor hosted RVA artist Chino Amobi and his mixed media exhibit “NON”; in September, the gallery hosted “Put This On”, an exhibit which featured local artists displaying t-shirts and merchandise where attendees could try on the shirts. Most recently, the artists who operate Endeavor RVA have created a new mural, the first of a new collaborative recurring series. 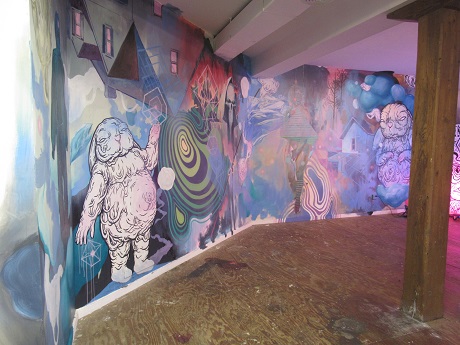 “Wet Walls” as its titled, premiered at the Brook Road art studio at the last First Fridays and is Endeavor’s second mural show, but first in this series that’s been a collaborative effort among the artists.

“This is the biggest we’ve all ever done,” said founder Ian Hess.

Hess, along with fellow local artists and Endeavor RVA organizers Eli McMullen, Christina Wingchow and Alex Beck are behind the colorful, trippy and multi-layered piece that sits inside the small, but warm studio. Hess said its been the plan from the beginning to launch a project similar to this. 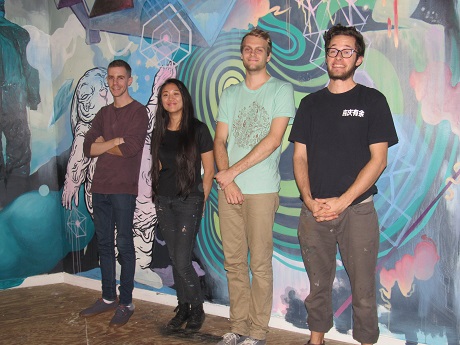 “We were talking about doing a mural show when we first came in here,” Hess said. “We’re really trying to push now what it means to be a collective, coming together functioning as an entity, while also being independent artists, but also trying to bolster ourselves through the space and the community around it.”

Endeavor RVA held their first mural show in May, but “Wet Walls” will be the first of is kind for the studio.

“The first one was the release of Dialogue’s magazine, they were releasing out of here…it was a big show and we had murals on the wall and that was us doing our own murals, and this is the first attempt to be collaborative with it,” Hess said. 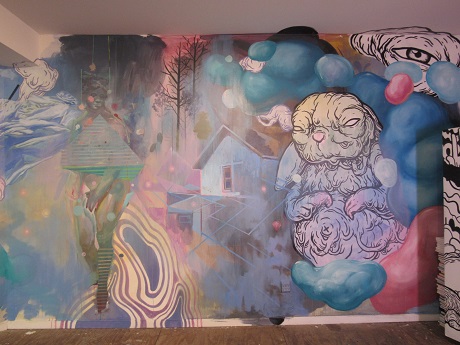 The mural, which spans pretty much the entire space of Endeavor RVA, only took about four days and was finished up just before their First Friday showing. From evil rabbits, to multi-colored warped-looking spirals, to reapers and houses the mural tends to take on a life of its own, but the artists said they weren’t working on any one particular theme.

“It wasn’t really an initial plan, we talked about it, but it came easy enough to just start somewhere and eventually as it filled in they started to bleed into each other,” said McMullen. “It was really the first time we really tried to work on the same piece all together, everyone was in the studio, it was kind of frustrating because our styles are different, but it was fun because there was no pressure so we just make it work.” 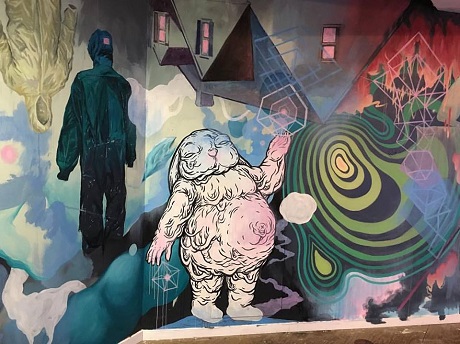 And different styles indeed stand out in this piece. Alex Beck is a local figure artist who studied at the Ringling College of Art and Design in Florida and painted the figures to the far left of the mural. He designed a show for the Nucleus Gallery in Portland with the theme of wrapping paper and fabric around organisms and took some inspiration from that for his work on the mural.

“I was kind of experimenting with the texture of using these coveralls and paper and sculpture, kind of monochromatic figures, and mostly playing around with the material,” he said.

For Hess, he usually meditates and maps out what he wants to do when starting a piece, but he said for this mural, he went in with without a plan.

“I think Eli and Alex been definitely been pushing me to think a lot more about color,” he said. “This one started off some of the graphic elements kind of with the wood grain was opposite colors, and Eli had to take a photo and inverse the colors of it and I saw what it was and I loved that photo and I think that was one of the big direction shifts, inversing the colors. I did those graphic pink and purple elements…I did that reaper up there as well…”

Hess added the result pushed him outside of his comfort zone and was a good way to crack open his abilities.

For McMullen, a VCU painting and printmaking graduate along with Hess and Wingchow, much of his work revolves around constructing environments and imposing structures within landscapes.

“I kind of borrowed some of the themes I’ve been using with some of the structures I focused on a lot of houses and geometrical forms,” he said. “I kind of placed those in major parts of the wall to establish somewhat of a composition.” 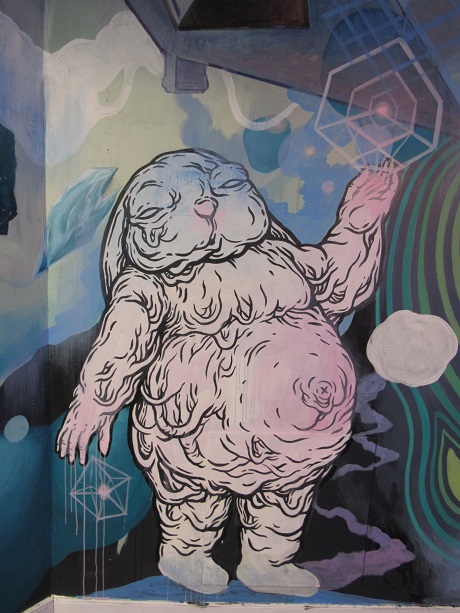 “I don’t really know exactly what I’m doing with my work direction-wise so much besides letting it evolve organically which I feel starts from this very loose line work and organic forms,” she said. I’ve been doing a lot character-based things over the past few years just trying to mix these few styles that I really like.”

The “Wet Walls” series will take place every three months, with a new mural going over the previous one. The name is actually fitting to what they’re trying to achieve with the project according to Hess.

“I think Wet Walls is just a great name, from us working up to the very day, to it being something that comes down at the same time, constantly trying to stay fresh that can be made repeatedly throughout the year, it seemed like the right name,” he said.

Hess said the response from the community since the opening reception on First Fridays has been great, and they try to make the most of the monthly-event, because that’s where they see the most foot traffic.

“First Fridays is always such a massive pickup for us,” he said. “It’s like a thousand people {who} come through in the same night.” 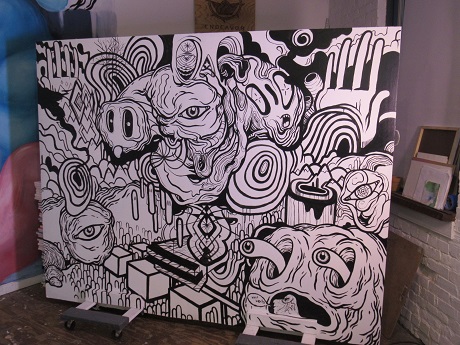 Endeavor RVA is also selling panoramic prints of the mural for $40 for people who would like to have a permanent piece of the mural that will be painted over in a month.

McMullen said the collective is hoping to grow the series to include other local artists.

“A major aspect of where we hope to see this project develop is encouraging a lot more outside artists to take part and get the exposure and the opportunity to work with new people because we always love it when we make new connections through this space,” he said. “If it’s going to be a recurring project, I would love to have new and old friends come and help us out and want to be a part of it.”

And while they don’t have concrete ideas for the look of the next mural in the “Wet Walls” series, Hess said they do have some plans. On, Nov. 4th, the next First Friday, Endeavor RVA will host a portraiture show bringing in local artists.

“We’d be doing live portraits while the night is going on so this will probably be totally gone that night,” Hess said referring to the mural.