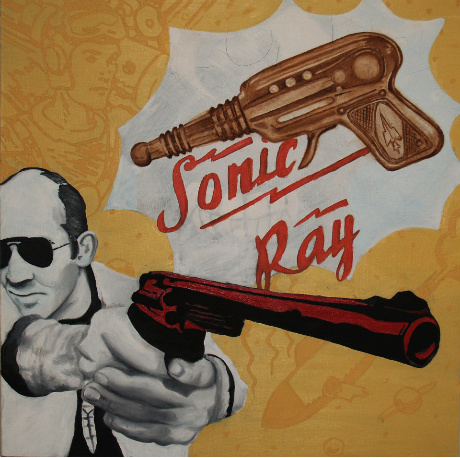 I’ll just go ahead and admit it: I’m a sucker for all things Gonzo. Really.

I’ll just go ahead and admit it: I’m a sucker for all things Gonzo. Really. Say what you will about the contrived nature or audacity of furthering a legacy, or attempting to build a movement out of the unrealized visions of a dead white man. To me, the reckless experiential narrative, unbound honesty, and even-handed opinionative style of Hunter S. Thompson is something to be studied, practiced, and ultimately incorporated into the individualistic identity of the New Journalism.

Knowing this, it would easy to assume that I saw Erik Shipp’s piece “Ray Gun”, which prominently features the Gonzo literary icon, and jumped on the chance to interview him. The truth, though, is that I didn’t see “Ray Gun” until Shipp was on his way to the RVA Compound for our interview.

What drew me to Shipp’s work was his manner of acknowledging the relevance of stark contrast and concrete foreground to the majority of work being produced today. At first glance, that’s all you see. But then something else emerges, something loose like the way a southern drawl sometimes slides from the lips of a country kid who has lived in the city for a few years and hasn’t quite let go of his roots. It’s a human element that stirs within the rigidity of an urban landscape. And it’s what makes Shipp’s art really stand out from that of his contemporaries.

That being said, I had to know what drew him to the image of the “Good Doctor”, and for all the questions I had prepared, it was the first inquiry of our interview.

Erik Shipp: Actually, the picture was brought to my attention by a friend of mine who sent it to me from jail. He had gotten out of a book, and I always liked it. The whole thing has to do with how we as society give our kids toys like guns and swords like it’s no big deal. I thought it made sense with the fact that he killed himself, he was a big gun advocate, and he blew his head off. So it kinda speaks to that a little bit.

S. Preston Duncan: Do you think that using the image of a gun carries an inherent message, or has an implication of support or denouncement, or is it contextual?

ES: It’s about weapons as much as it is about guns, whatever’s current at the time. And with the Buck Rogers stuff in the background, I use a lot of older source images, because it’s relevant, it’s history. Usually if I am speaking of something in a piece it’s a current issue, but I’m pointing out the history of it, so to speak, or to utilize that.

The image of Thompson with a gun invokes a sense of wild power, abandon and wicked excitement. The juxtaposition of this to a child’s toy, a cartoonish sidearm of a fantasized Martian, undoubtedly navigating flying saucers, implies not only a physical threat, but some kind of peril to the imagination, and to innocence. The presence of Buck Rogers imagery cements this concept, and suggests something provincial.

Shipp grew up in Gordonsville, Virginia, the type of place with a Main St. that is actually the epicenter of the town, and is still a quiet road. “Small Town USA” will leave traces of dusty roads and dogwoods in the eyes of any expatriate, but Gordonsville is only half an hour outside of Charlottesville, a proximity Shipp says he took advantage of, and this is well represented in his style of painting, though not an influence he claims as primary.

His digital prints, however, speak of a somewhat different perspective. The piece “TV Prison” is more mechanical, and technologically conscious.

ES: It’s something I want to definitely explore in the future. I source a lot of stuff out of older magazines, Life and stuff like that, so the image of the prisoners is one I found when they were doing a story on WWI in the 1960’s Life magazine, and I love the picture, it’s just this sea of people, and in fact they are actually prisoners. I see it more as just heads, than prisoners, and it creates a really neat texture. It’s an image that I’ve always wanted to use, and it just seemed to work.

The social commentary aspect of his work is fairly constant in varying degrees of representation. At times overt, as in “TV Prison”, and in other instances as more of a vague contemplation of values, actions and cultural phenomenon. I ask if he feels he’s expressing a political vision, or acting in accordance to some personal mission.

ES: Social commentary most of the time. Not any specific agenda, it’s more just whatever matters at the moment. People talk about things all the time, it doesn’t necessarily have to be politics, or any one specific thing. I feel like my work is the same way. I might have a conversation about something and it might spark an interest. I guess there’s no overall theme or agenda outside of commentary.

A recent alum of VCU, Shipp has returned to art after a hiatus of 12 years with a renewed interest and vision. The upcoming show at Grape And Cheese will be his first since graduating. His early influences continue to surface, however, interacting with his increasingly developed and mature approach to the canvas.

ES: Growing up in the 80’s if I had to pick an influence, it would be that whole era. The Reagan era, Reaganomics. I was into the hardcore scene which was always fairly political. So during that time period, my teenage years, I had an interest in social issues, politics, and the music I was listening to at the time contributed to that.

While you probably won’t find a print of Reagan with a bullet hole in his head, his art, whether blatantly or implicitly, continues the tradition of questioning the status-quo, and does so with a twist of culture that permeates his pieces. It’s like a lemon hiding beneath the ice in a glass of sweet tea. You can’t quite put your finger on it, but the flavor is definitely there.

Erik Shipp will be showing at Grape and Cheese from June 5th until July 2nd, 1531 W. Main St. with an opening reception and free wine tasting Friday, June 5th, from 5 to 8pm.