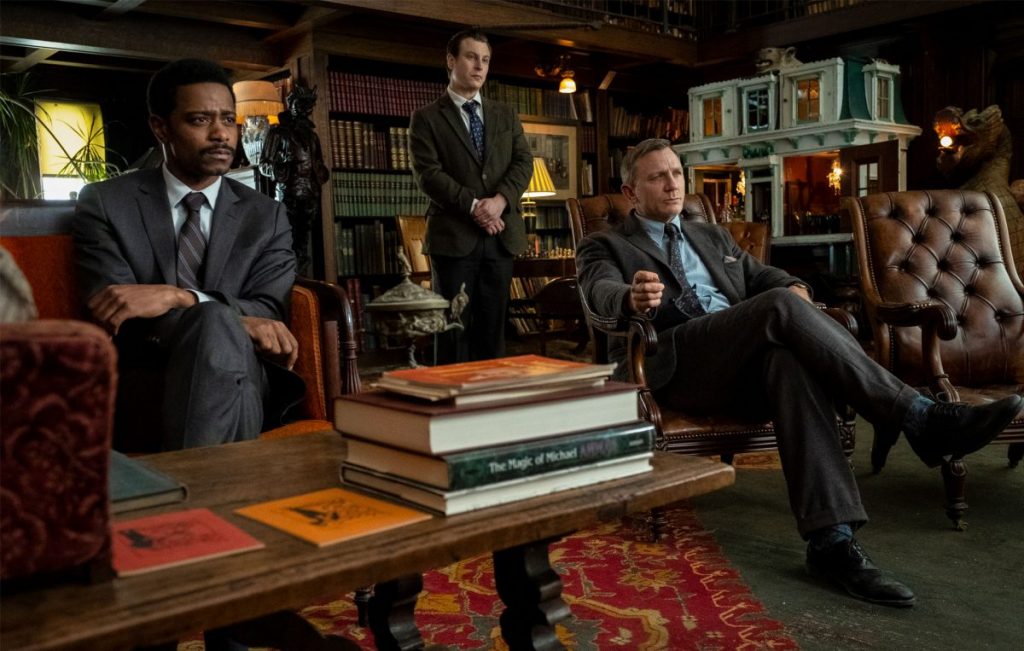 In Knives Out, Last Jedi director Rian Johnson takes a stab at a traditional country-house murder mystery, with excellent results.

Don’t be surprised to find out that one of the most politically prescient films of the year comes from a director whose last film, Star Wars: The Last Jedi, sparked a backlash among hordes of rabid fans for making the outer reaches of the galaxy more inclusive. If his latest project is anything to go by, then Rian Johnson certainly hasn’t been dissuaded from injecting new life in established premises by his experiences in a galaxy far, far away.

Knives Out, like any good whodunit, is a near-cacophony of moving parts, most of which are gesturing wildly for your attention, others purposefully hanging back. There are the Thrombeys and Drysdales, all of whom are members of the film’s central family. Harlan Thrombey, its patriarch, is a celebrated mystery writer, whose works have made the family rich beyond imagination; both of his kids, Linda (Jamie Lee Curtis) and Walt (Michael Shannon), and his daughter-in-law, Joni (Toni Collette), live lives of luxury thanks to his creative success.

So do their own children, though perhaps Ransom Drysdale, son of Linda (Chris Evans, finally in a role that lets him explore his spoiled side), takes the lifestyle to the extreme. And then there is Marta Cabrera (Ana de Armas in a breakout role), Harlan’s caretaker and friend, a quiet, empathetic young woman who is an audience to the family’s squabbles.

When we meet the family, a rather serious squabble is taking place, but you wouldn’t know it at first glance. It has been a week since the family celebrated Harlan’s 85th birthday, and also a week since he committed suicide. The family has gathered at Harlan’s home to answer questions from the police and a mysterious private investigator, Benoit Blanc (a sly and devilish Daniel Craig), who are supposedly there to tie up any of the investigation’s loose ends.

Johnson has set up a playground for all of the film’s stars to shine; even the gothic, New England mansion in which a majority of the film’s action takes place is one of the best set pieces in film this year. Craig’s Benoit Blanc guides the family’s zany characters as they recount their memories of the fateful night’s events. The stories play out in a he-said, she-said series of intercut scenes that paint a blurry picture of the truth. Marta is seemingly the only person in the “family” who can separate fact from fiction, though that is thanks to her stomach, which acts as a gruesome lie detector and wraps her up in the investigation far more intimately than she ever could have expected.

That is about as much of the actual plot it is safe to discuss, as the moving parts quickly gather steam and threaten the tenuous bonds between the family members. What plays out over the next two hours is an inventive and meticulously plotted riff on the classic whodunit, one that injects a timely political perspective on the issues that guide some of our worst and best behaviors.

Ana de Armas and Daniel Craig anchor Knives Out with worldly compassion, a welcome relief to the acidic, un-self-aware witticisms the Thrombeys and Drysdales dole out at every chance. Marta’s characterization does fall prey to the “perfect immigrant” trope, though. Her complexity is sacrificed by Johnson’s choice to paint her as a faultless representative of her community; in reality, she feels like a projection of Johnson’s, and our own, fear of seeming prejudiced. It is an easy trap to fall into, and while Marta feels like a real person with real world concerns, Johnson goes to great lengths to remind us that she has done nothing wrong throughout the wild events of the film.

This summer another film, Ready or Not, took a stab at rich/poor power dynamics, in this case through a horror-comedy lens. The film’s violent hide-and-seek premise put its heroine through the ringer, so much so that, in a moment of breathless disbelief at her situation she yelled, “Fucking rich people!” The moment elicited the right amount of laughs considering its genuinely violent context, and we got to revel in its righteousness.

I can’t help but regret that Marta never gets her own “fucking rich people” moment, because Johnson is seemingly afraid of what it would look like for a Latina to say it. Johnson is balancing on a tightrope, politically speaking, because of the movie’s mainstream aspirations (Marta was probably not, under any circumstances, going to be allowed to say, “Fucking white people!”), but it still feels like a missed opportunity. If the film’s financial stakes were lower, maybe Marta could have sunk her teeth in more.

But if Johnson, who both wrote and directed the film, is trying to express anything, it is compassion and understanding for people on the margins of society, the people for whom this world was not made. He does this in a clever way, and in a sense the only way, by letting the complicated (and problematic) perspectives inherent to his characters play out in a whodunit mystery. The genre is an excellent analog for Johnson’s messaging, because it forces one character to navigate the ramifications of other people’s decisions in an alien world.

For all the ambiguities playing out in the family members’ stories, there is little ambiguity in what Johnson wants you to take away from his film. That won’t sit well with every single person who watches it, but that’s a good thing. Knives Out was released on Thanksgiving in the wake of several big-budget projects that ask very little of their audiences, instead banking on spectacle to boost ticket sales. Mid-to-big budget studio movies rarely take risks anymore, but Knives Out represents the kind of intelligent, studio-backed filmmaking that asks serious questions about the people in the film and the people watching it.

The two hours you spend watching Knives Out are filled with questions about the American dream, marginalization, class, and greed, which are not often asked in other films that somehow still compete for the same audience. On top of that, it is immense fun, probing those serious topics with a biting wit and clear sense of perspective.

There is, like in any good whodunit, a catharsis in the way Knives Out resolves; accusations abound, a breathless monologue reveals the truth behind the crime at last, and the innumerable puzzle pieces fall into place around Marta, Benoit, and the Thrombey/Drysdale clan. One gets the feeling Harlan Thrombey could have used the backstabbing, undermining, and sidestepping of the previous two hours to create a masterpiece of his own, one that would surely line his family’s pockets for years to come. Luckily, Rian Johnson has crafted the mystery of the year for all of us to enjoy.