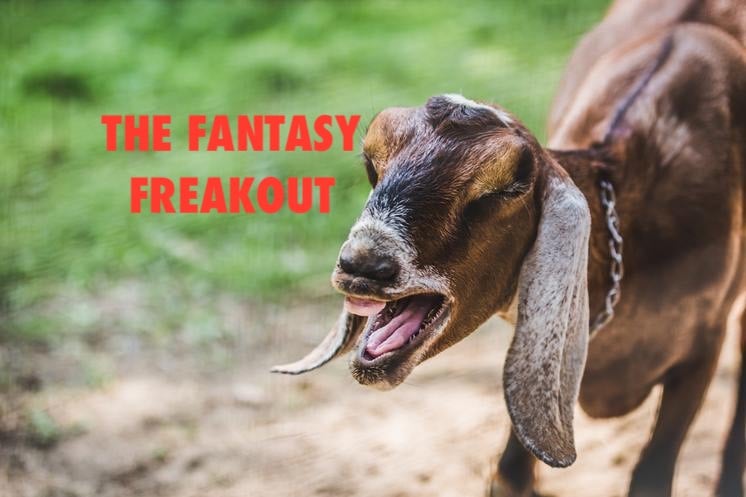 The first game of the NFL season starts in a few short hours. Time to freak out about getting our fantasy football lineups set! If you’re still not sure who you’re starting in your flex position, John Reinhold has some advice in this week’s Fantasy Freakout.

Here we are finally at the start of the season. Week 1 is going to be quite different than other weeks. We don’t yet know who’s got a hot hand or who looks rusty. So we’re not going on any major rants yet. UPDATE: I lied, it appears that if your a Ravens running back your ankle is in jeopardy. And just like that opening day brings another ridicules injury to the already depleted running back room of the Ravens. Gus looks to be out all season. Luckily he was my starting running back this week! Of course the free agent pool is full of great replacements. Hello Fantasy Football nice of you to remember me.

Fine lets move on. Tonight’s matchup, and the kickoff to our fantasy season, features the Super Bowl champs, Tampa Bay Buccaneers, vs Dem Hard Knock Cowboys. This matchup has some interesting fantasy implications. If you are like me and drafted Dak or Elliott, you have to wonder how this line is gonna hold up against a Bucs team that returns everyone and adds more playmakers. You drafted them, so you gotta play them, right? It’s a hard call, but I’m sticking with Dak to overcome any issues and throw a lot to keep them in the game. We are about to find out a lot tonight about this Cowboys team. It’s the kickoff, so I’m sticking with playing any and all players. But it could be a rough outing for Cowboys skilled positions.

Some kinda odd news this past week was the Saints releasing Latavius Murray. That was surprising considering how he was a great spell for Alvin Kamara. They must believe in the rookie, Tony Jones Jr. Look, they asked him to take a pay cut, and he said no. Can’t blame the guy; he was productive when he got his shots. Saints saved against the cap, which was something they had to figure out. I just wonder how this sits in the locker room. Now Murray is on my bench, taking up a spot until I make a decision on what to do with him. I’m holding on to him for now — maybe Buffalo or the Ravens will take a look.

Lets get to it: Below are some matchups to exploit, and streamers to use if you are still working out a lineup this week. It’s just week 1, so everything is still very much a wait and see game. I’m not freaking out quite yet.

Kirk Cousins vs Cincinnati Bengals Defense: A good matchup to exploit if you’re looking for a fill-in or good start for week one. I have him on my bench and Dak starting. I could play him, but I’m sticking to my lead.

Ryan Fitzmagic vs Chargers Defense: I suspect this is a worthy spot to start Fitzpatrick, as he often can start hot. I doubt he’s your first choice, but if needed, it’s a decent fill-in.

Jimmy G vs Lions Defense: In this article you’re often going to see people listed who play the Lions. Trey Lance is banged up a bit, and not starting, so this is a good spot for Garoppolo. He probably wants to hold onto the job this year, so I suspect he will be in good form. Also, the team’s main players are healthy.

Baker Mayfield vs Kanas City Defense: He’s gonna have to throw a lot. So there’s that. Keeping up with the Chiefs presents opportunity.

Trap Games/Busts: Tua Tagovailoa vs NE; Teddy Bridgewater vs Giants; Zach Wilson vs Panthers — can he defy the odds?

Tevin Coleman (Jets): Jets should want to keep running, and he has the body for it. This is worth a fill if needed in week 1.

Gus Edwards (Ravens): If you are lucky, you got Gus as a backup. Now he has the main role, and it’s his to lose. I think he rolls in this game. *LIES. TOTAL LIES. Yeah well he is down and that’s that.

Raheem Mostert (49ers): This is a perfect chance for him to get a hot start. I suspect he rolls out as the main, with Trey Sermon second fiddle. Worth a flex if needed.

Trap Games/Busts: Saquon Barkley, as we don’t know his usage yet. Lions D’Andre Swift, with the injury. Josh Jacobs, with limited catching upside. And Melvin Gordon has a rookie creepin’ in on him.

Robby Anderson (Panthers): He should be a main target for Sam Darnold. We shall see how that all works out this week. I suspect either way, he sees lots of targets this season.

Tyler Boyd (Bengals): He sure fell in a lot of drafts — lower than I would have thought. Joe Burrow should look at him often, with his size and hands. He might fall later in the year, but this matchup has some value.

Brandin Cooks (Texans): This is a last-man-standing kinda deal. They’ve gotta score somehow. Most figure he’s gonna get the looks and chances. It could be really good for owners, as when he’s healthy, he has put up numbers.

Robert Troydan (Packers): I suspect Rodgers gets going with what he trusts. Should result in his big target getting a touchdown. I’m not sold on lots of targets, but for TEs, touchdowns are what I look for anyway.

Jimmy Graham (Da Bears): Usually I’m not recommending Jimmy, but I think he can fill in this game because of the matchup. The receivers will be blanketed, so this is worth a look.

Logan Thomas (Washington): Logan runs lots of routes and this gives him chances to score. The only issue is that we don’t know if the connection with the bearded one will develop as we would like it to. Ryan has not targeted his TEs as much, but I think that will change. He should be solid for 10 points most the time.

Trap Games/Busts: Gerald Everett; he’s in a new system. We’ll have to wait and see. Zach Ertz; I just don’t know his usage. Jared Cook could have a decent game, but I want to wait and see.

Green Bay Packers vs New Orleans Saints: They face Jameis Winston on neutral ground. This should give some interceptions, unless he’s suddenly improved drastically. I just don’t see it. I’m streaming them in my league.

Denver Broncos vs New York Giants: They added some really stellar additions to the defense, and also have a healthy team coming into the season. I would feel good starting this squad.

Philadelphia Eagles vs Atlanta Falcons: Philly has some good parts to put pressure on Atlanta. However, the question is: what will Pitts add to ATL? Its a possible start if you have to.

Trap Games/Busts: Chicago won’t have it easy with the Rams. The Cardinals may have issues stopping Derrick Henry. The Browns want nothing to do with the Chiefs. The Raiders pull the Ravens, and that might get nasty.

OK, that’s the freakout this week. It’s the start of the season, so nothing too crazy yet. Hope your team does well. Here we go!!!

Photo by Thomas Park on Unsplash.